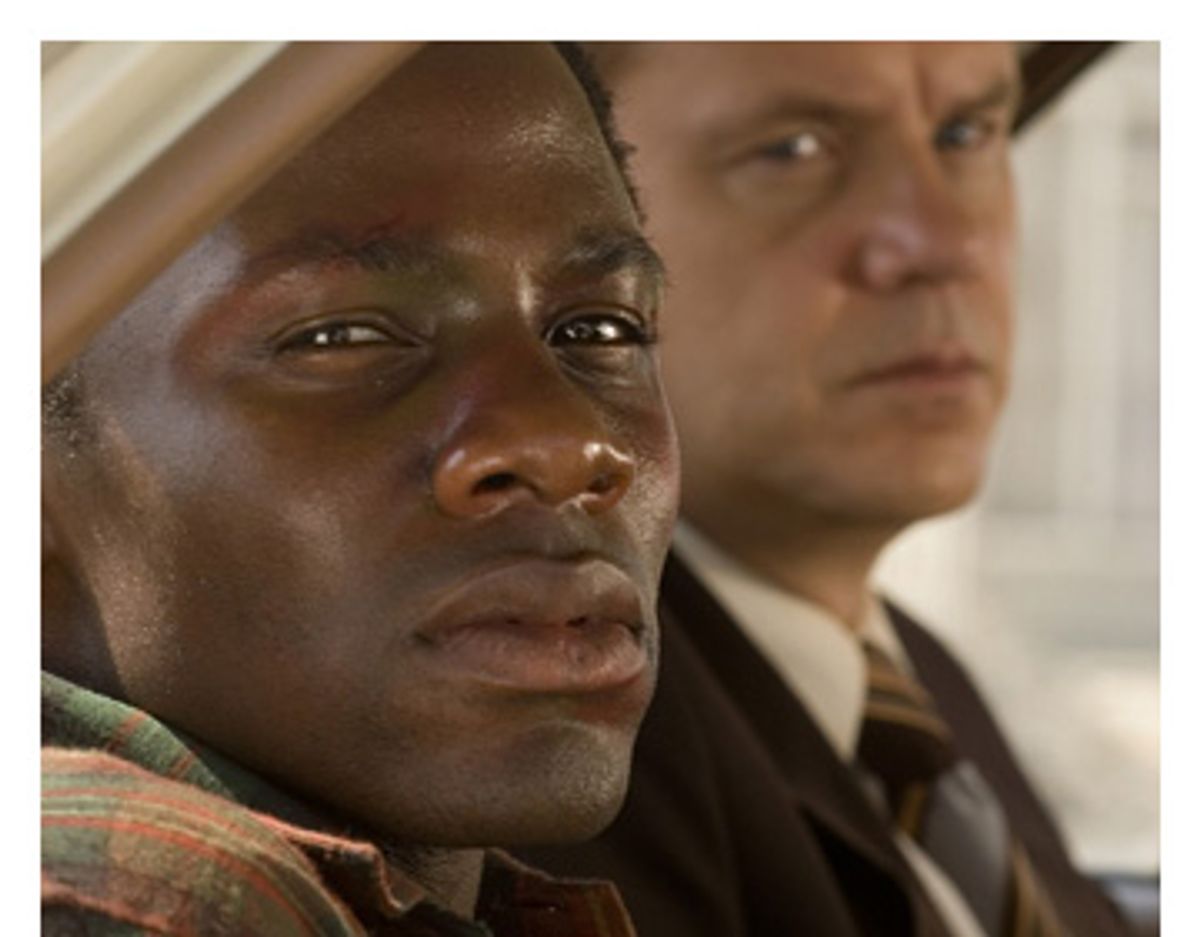 A few years back director Phillip Noyce shifted away from making generic commercial thrillers like "Patriot Games" and "Clear and Present Danger" to focus on more pointedly political (and personal) pictures like "Rabbit-Proof Fence" and "The Quiet American." Nearly all directors work as a gun for hire at one time or another, and there's no shame in it. Still, with "The Quiet American" in particular, Noyce emerged as the thoughtful, engaged filmmaker that the people who had seen his early Australian films (like "Newsfront" and "Heatwave") had claimed he was.

That's why it's such a drag that his latest, "Catch a Fire," isn't better than it is. Set in South Africa in the early 1980s, "Catch a Fire" tells the true story of Patrick Chamusso (Derek Luke), a family man-turned-African National Congress fighter who's being pursued by Afrikaner security bigwig Nic Vos (Tim Robbins), another family man whose job of preserving white supremacy in his country is becoming increasingly difficult as the ANC rallies more black citizens to action. "Catch a Fire" was written by Shawn Slovo, who also wrote the astonishing 1988 autobiographical picture "A World Apart," which detailed her family's involvement in the anti-apartheid movement: Slovo's father was Joe Slovo, at one time head of the ANC's military wing. (Post-apartheid, he served as one of Nelson Mandela's cabinet members. He died in 1995; "Catch a Fire" is dedicated to him.) Shawn Slovo's mother, Ruth First, was assassinated in 1982 by a letter bomb.

As a raw equation if not as a film, "Catch a Fire" has everything going for it: a smart director, good actors, a writer who's a proven storyteller and who has a deep emotional stake in the material. But scene by scene, "Catch a Fire" just doesn't spark. The story is harrowing, and Noyce, Slovo and the actors make it clear what's at stake here -- not just for Chamusso, but for the whole country and its people, black and white. But maybe that's the problem: The picture makes its points with perfunctory effectiveness, yet it never sweeps us into rangier, more difficult emotional territory.

You can't not feel something for the black South African characters Noyce gives us here: He shows us how people were arrested and imprisoned without grounds and prevented from contacting lawyers or family, and how completely innocent citizens were beaten and tortured. Even so, Noyce fails to allow those people, at that time, in that country, to burrow into our consciousness the way he made '50s Vietnam reverberate so deeply in "The Quiet American."

Noyce takes great pains to set up the parallels between Nic and Patrick, chief among them the fact that both feel they're working to defend the welfare of their families. That doesn't mean our sympathies don't tip heavily in one direction. Derek Luke is a warm, communicative actor: His eyes let us know what he's thinking even when he hasn't said a word. Particularly as Luke plays him, Patrick is an immensely likable and human hero, a reluctant fighter who, under different circumstances, would have been fairly content to live quietly with his family, grateful for his foreman's job at the Secunda oil refinery. And even given Patrick's tendency toward marital restlessness (which the movie deals with squarely), there's never any doubt that he loves his wife, Precious (played by Bonnie Henna, who's both appealing and soulful), and their two daughters.

Robbins' Nic, on the other hand, is your typical bad guy with a soul -- which would be a good thing if Robbins didn't lay the soul bit on with a trowel. Obviously, all actors warm to material that speaks to them personally, and Robbins' strong political convictions are often a factor in the roles he chooses. But Robbins doesn't just sympathize with the bad guy, searching for layers of humanity beneath his brutality; it's as if he's trying to reform Nic from within. Robbins' Nic trudges through the picture with a glued-on pained expression, as if he were the victim of his own internal monologue, one that goes, "I don't wanna be this bad, but I just can't help myself!" His wife, played by Michele Bergers, may be more cartoony, but she's also far more unnerving: When she attempts to communicate with Patrick in what she believes is his "native" tongue -- of course, he speaks English perfectly -- the condescension behind her version of enlightened kindness is blatant and horrifying.

"Catch a Fire" feels like a snapshot of South Africa at the time, a place of injustice, danger and unrest; Noyce isn't so arrogant that he believes he can give us the whole picture. Even so, the movie feels rushed and truncated at the end, as Noyce tries to wrap up the story without following it through the necessary paces. Noyce is a skilled enough director that you can't help wishing he'd been able to expand the story and fully explore some of its more intricate channels. When Patrick begins his training at a rebel camp in Mozambique -- his decision to join the ANC means he may never see his family again -- some of his fellow inductees shout about how they want to "kill the Boer" to take back their country. In response, their commanding officer asks them repeatedly, "Are you willing to die for your country?" -- to make clear that their mission is one of sacrifice, not murder. (The ANC's strategy was to attack symbolic targets, avoiding human casualties at all costs.) It's a rousing moment, but it's an incredibly sad one, too. Noyce touches on the idea that to be a true freedom fighter, a man has to give up freedom for himself. Ultimately, he does a pretty good job of telling us the cost of freedom; he just can't quite put us inside the skin of the people who had to pay it.