Rush Limbaugh, Michael J. Fox and the cruelty within

The stem-cell ad seems to work. Will Limbaugh's attack backfire? 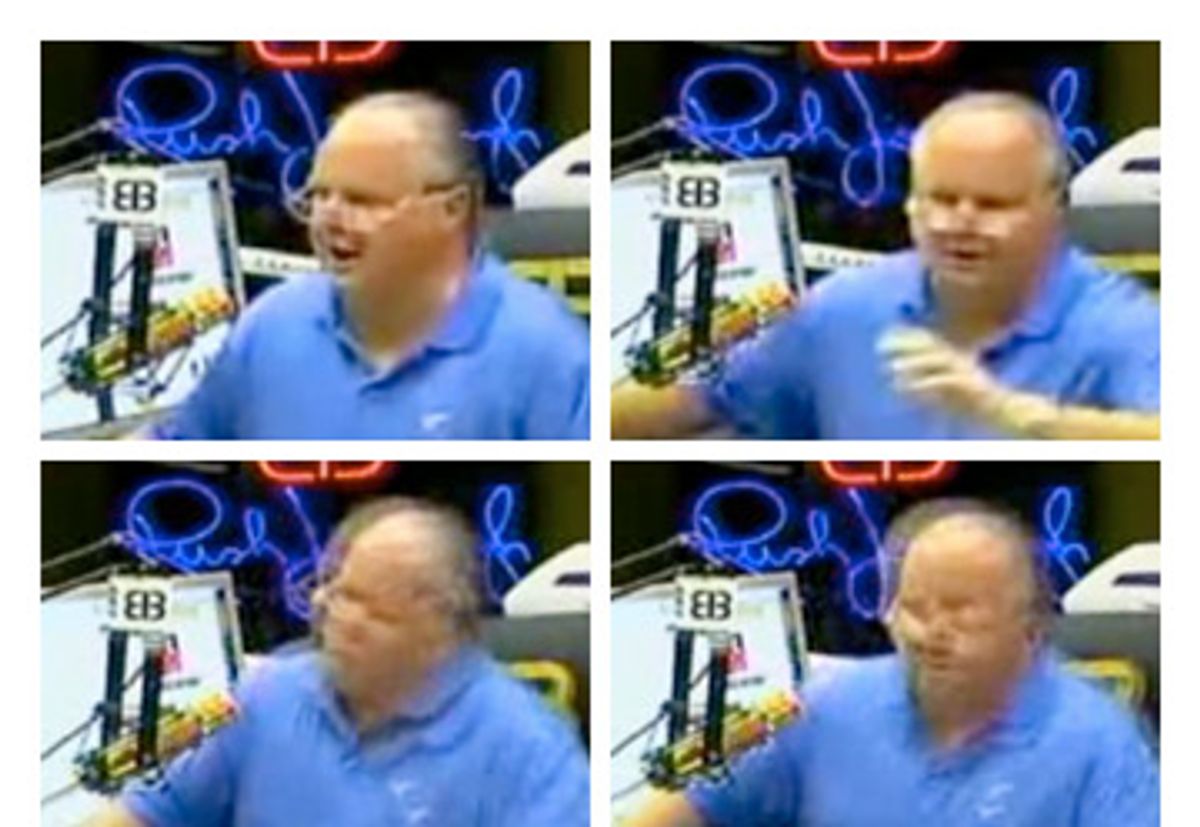 If the Mark Foley scandal has exposed some Republicans as hypocrites on family values, will the Michael J. Fox-Rush Limbaugh dust-up out some others as just being mean?

We'd like to think so. We're not much for ad hominem attacks, but it's really pretty impossible to watch Limbaugh mock Fox for his stem-cell TV spot without thinking that Rush is pretty rotten at the core. Limbaugh didn't just suggest that Fox was faking the symptoms of Parkinson's disease in his advertisement for Claire McCaskill; he took things a step further by acting out the shaking himself -- all while saying that Fox was the one behaving in a "shameless" way.

Limbaugh says that Democrats always do this: They trot out someone who's a victim of something or other and thereby make it impossible to engage in reasoned debate. He's not the first one to make that claim; it's the same argument Ann Coulter makes about family members who lost loved ones on 9/11 and have the audacity to say that they wish the Bush administration were doing more to stop the next terrorist attack.

Is there anything to this argument? Maybe, but what's the alternative? Are Limbaugh and Coulter suggesting that we deny those most directly affected by government policies any role in debating them? Should wealthy executives be silenced during discussions of tax cuts? Should the automakers be denied a say in any debate over fuel economy standards? Did Limbaugh complain this week when George W. Bush said that the United States has to stay the course in Iraq -- well, not "stay the course, " but you know what we mean -- out of allegiance to "the husbands who have lost their partners in life ... children who won't ever see their mom and dad again ... and to the families who still have loved ones in harm's way"?

It's OK for Dick Cheney and the Republican National Committee to suggest that we'll all die at the hands of terrorists if Democrats are elected in November, but it's somehow unfair for a guy suffering from Parkinson's disease to say that he hopes Missourians elect a senator who supports stem-cell research?

A study from HCD Research and Muhlenberg College Institute of Public Opinion suggests that the Fox ad is pretty effective: Seventy-eight percent of those in the study group said they supported stem-cell research before watching the ad; 83 percent said they supported it afterward. We'd like to propose another study -- one that measures whether Americans really think Limbaugh has "talent on loan from God" after they see him flopping around in mockery of the victims of Parkinson's disease.