Brownout at the EPA

The agency shuts down five public libraries full of environmental data, and employees and activists question the Bush administration's motives. 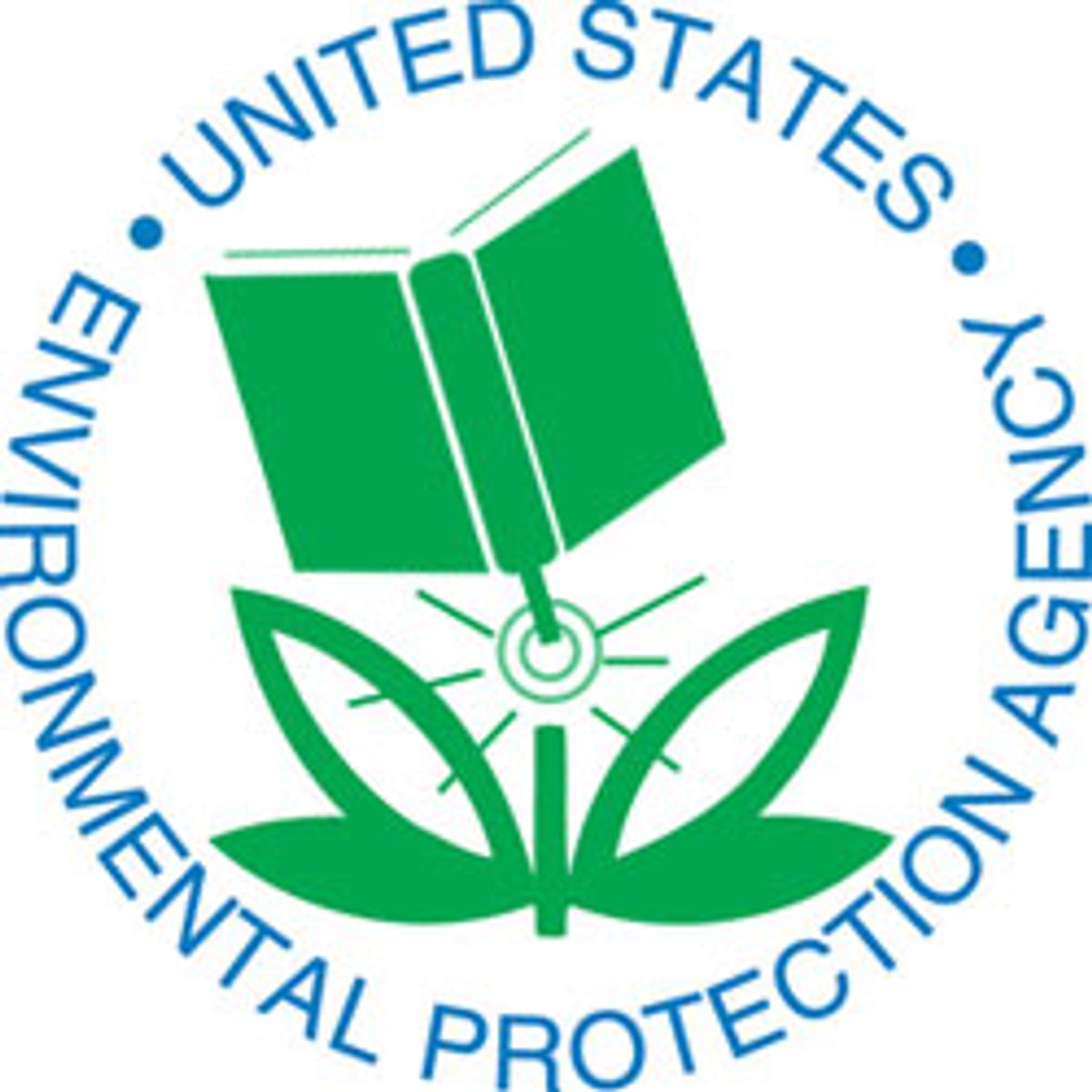 'When Verena Owen wanted to block the construction of a sludge incinerator in her hometown north of Chicago, she went to the library. At the Environmental Protection Agency's regional library in Chicago, Owen pored through archived microfiche records and paper reports on sludge and incineration and public comments on similar projects. Owen learned that just a fraction of a teaspoon of mercury could poison a 10-acre lake -- and the proposed plant would have spewed 92 pounds of mercury into the air of Waukegan, Ill., annually. Her research proved pivotal in forcing the plant to relocate and vastly reduce its mercury emissions.

At the beginning of such a project, says Owen, a veteran clean-air activist for the Illinois Sierra Club, "you don't always know exactly what you're looking for. These were things I just needed to see."

But now the library where Owen did her research is closed, as are similar facilities around the country. Announcing the closings with all the fanfare of a pin drop, the Environmental Protection Agency quietly began downsizing its 35-year-old library network earlier this month, shuttering its headquarters branch in Washington and three regional libraries in Chicago, Dallas and Kansas City, Mo. Hours and services are to be reduced gradually in the remaining 22 regional branches in the network. The agency's budget has been slashed by $100 million for the fiscal year beginning this month, and the libraries have lost one-third of their $6.5 million annual funding. The EPA cites its money woes and a shift to an online model as the reason for the closures, but critics charge the move will erase vital chunks of institutional memory, and is more proof that the Bush administration has no interest in letting the EPA fulfill its role as an environmental watchdog.

"This is a way to keep EPA from being an effective organization," says a former librarian with the agency. "Take away their research ability. Cripple them." Adds Dwight Welch, a union official who represents EPA employees, "The closures seem like part of a general trend of hostility towards science by this administration. They don't want to hear the facts on everything from global warming to raising drinking water standards."

The library closings have caused distress among agency employees, who see the network's trove of technical reports and scientific data as vital to their mission of proposing and enforcing the nation's environmental laws. "It's as if your local fire department was getting rid of their fire trucks," said Suzanne Wuerthele, an EPA toxicologist with 22 years at the agency, who works at the regional office in Denver. "We won't be able to fight our court cases; we won't be able to inform the public; we will be much less effective, certainly less efficient." But the closures are also a problem for civilian activists like Owen, who will have greatly diminished access to records that have proved instrumental in fighting grass-roots environmental battles.

In a process the agency terms "deaccessioning," materials at the four closed libraries are being boxed up, labeled and shipped to three repository locations, where they are to be cataloged anew and eventually digitized. The headquarters library alone includes 16,000 books, 380,000 microfiche documents, and a vast array of technical reports and research monographs. The headquarters library -- once staffed with librarians and open to the public -- will now be one of the three repositories used to store materials until they can be dispersed to other libraries, federal agencies or universities. EPA staffers at all the closed libraries are being transferred, and an unknown number of contract employees have been fired.

And the Bush administration hasn't finished. In addition to shuttering these libraries, the EPA plans to close its Prevention, Pesticides and Toxic Substances library in Washington, which contains unique holdings on pollution prevention, toxic substances and chemicals, and was used to research and craft important new regulations, such as tighter arsenic standards for drinking water in the 1990s. The closing has not yet been announced, but employees report that materials have already been boxed up and stored in the basement.

So far the EPA has been mostly close-lipped on the changes, making a stealth announcement of the headquarters closure in the Federal Register just 10 days before the doors were permanently shut.

The agency says the closures are part of its shifting its holdings to an electronic model in a climate of increased online access and tighter security measures at federal buildings. An EPA press release titled "EPA Expanding Library Info Access" says that retrieval of materials "will not only be more efficient but also [materials will be]  easier to locate by using the agency's online collection and reference services." Agency spokeswoman Suzanne Ackerman says the process will be complete by January 2007. "We have the scanning equipment, and the labor costs are pretty minimal. Even if we don't have a huge budget, we have interns."

Yet the agency's own fiscal year 2007 library plan, released in August, is vague about time and money. "In FY 2006," it notes, "some Regional libraries may begin dispersal of some of their physical collections. Other Regions may put their collections into stasis, i.e. neither fully operational nor fully closed, until funding for dispersion is available."

Off the record, several EPA employees told Salon they are skeptical both about the timetable and about whether the agency's material really will become available again in digitized form. For their own protection, some have referred their complaints, and leaked documents, to Public Employees for Environmental Responsibility, a nongovernmental organization that supports institutional whistle-blowers. Many internal EPA documents related to the closures are now on PEER's Web site.

Jeff Ruch, PEER's executive director, summarizes what EPA staffers have told him. "It's almost like the EPA is having a fire sale. They're not doing this with any kind of foresight and planning. They don't have any money for digitizing, and even if they did have the money they don't have the staff to catalog these materials. Literally hundreds of thousands of things are being boxed up without being cataloged. There's no deadline, no budget and no staff."

Moreover, even as the agency touts an increased online presence, it has canceled subscriptions to online data sources such as Greenwire, an environmental news service that received 125,000 hits from EPA staff last year. When asked to confirm the Greenwire cancellation, spokeswoman Ackerman initially said, "It would be almost hilarious for us not to have Greenwire ... There may be days when we'd rather not read what they say, but I can't imagine we'd cut that." She later confirmed the cancellation of the service.

The agency's employees lodged a formal protest this summer. At the end of June, union officials representing just over half of the EPA's 18,000 staffers wrote Congress to demand the library funds be restored. The closures, the letter argued, would hinder emergency preparedness, antipollution enforcement and long-term research. The letter also lamented the loss of staff who provided critical support to enforcement officers, conducted detailed database searches and often served as the public's main link to the agency. Library staff "allow EPA scientists to spend more time conducting inspections, writing public health and environmental policies and implementing the Agency's regulations," the letter said, adding that the "draconian manner" of the closures represents just "one more example of the Bush Administration's efforts to suppress information on environmental and public health-related topics while cloaking these actions under the guise of 'fiscal responsibility.'"

The letter to Congress and the unhappiness within the ranks have captured the attention of lawmakers. Last month three House committees -- Science, Energy and Commerce, and Government Reform -- asked the Government Accountability Office to initiate an investigation, citing "grave concerns" over the impact of the closures. "A shuttered library does not further open and transparent government," Reps. Bart Gordon, D-Tenn., John Dingell, D-Mich., and Henry Waxman, D-Calif., wrote.

"It did seem to us that if you want to modernize and make things electronically available that's fine, but you need a plan for that, and we don't see one," said a staffer in the office of Rep. Gordon, ranking minority member on the Committee on Science.

The GAO now says it plans to launch an investigation in the next two months.

Some EPA employees have also questioned whether the changes are really cost-effective, in both the short and the long term. An internal EPA study in 2004, for example, showed full library access saved the agency an estimated 214,000 hours in professional staff time, valued at some $7.5 million annually. The savings come not just from proximity to information that otherwise would have to be hunted down elsewhere but in the human capital of a library staff trained to assist the public with complex research.

Maureen Kiely, manager of EPA Region 8's technical library in Denver, which is not slated for closure, said her librarians receive hundreds of questions each month. Some queries take as little as three minutes to answer, others as long as three days. In recent months librarians have researched requests on techniques for lead paint removal from a historic bridge, wastewater management in coal-bed methane production, and the concentration of the fungicide/insecticide hexachlorobenzene in bird eggs.

For the public, the libraries offer physically present data, something that is difficult to replicate through online searches. "It's all reading between the lines when you're doing research," said Jim Schermbeck, a grass-roots activist and board member of Downwinders, a Texas clean-air group that opposes cement plant emissions. When Downwinders first started its work, the EPA's library in Dallas, now closed, was indispensable in providing raw data on the cement companies the group was fighting. "You're putting together pieces of a puzzle and getting a narrative you didn't know existed," said Schermbeck. "That's the first step for anyone tackling an environmental problem, and without direct access to the documents, it's a lot harder to piece together."

Petra Bartosiewicz is a writer living in Moab, Utah.