A new protest movement inside the military -- including active-duty soldiers back from Iraq -- is calling on Congress to end the war immediately. 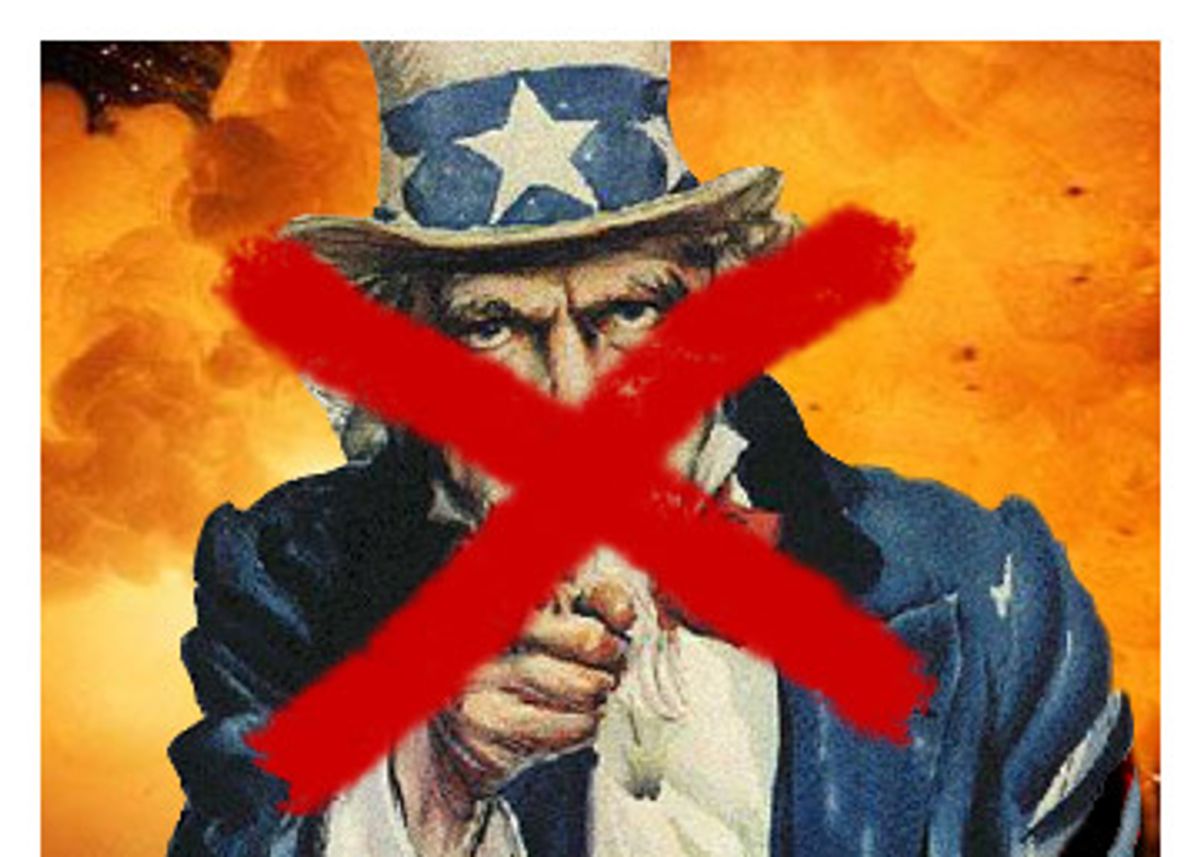 An extraordinary full-page antiwar ad appeared in the Sunday edition of the New York Times on Nov. 9, 1969. In it, 1,366 active-duty U.S. service members signed a statement calling for an end to the war in Vietnam. The signatures represented a tiny minority of the 3.5 million troops serving on active duty then -- but behind those signatures was a groundswell of dissent inside the military. With the Vietnam adventure sliding into an abyss, that dissent would become more apparent as an Army that included many conscripts faced ugly resistance from within: soldiers disobeying orders, deserting, using drugs, and even "fragging" their own officers with grenades.

Today, there are echoes of the Vietnam experience in the protracted Iraq war -- including a growing protest movement in the military. Its trappings are starkly different this time. Rather than insubordination and violence, it has formed around a form-letter campaign, presumably conducted within the bounds of military regulations that restrict what soldiers are allowed to say. Last week, a group of current troops, with support from a handful of antiwar organizations, announced plans to petition Congress with a collection of "appeals for redress," which call for an immediate withdrawal from Iraq. They had 65 signatures from active-duty troops and reservists.

Since then, the effort has quietly swelled to nearly 500 troops, and continues to grow. Organizers, including 22-year-old Marine Sgt. Liam Madden, say they are currently working to validate the identities of several hundred more troops who have signed on, and will send the validated collection of letters to the soldiers' respective congressional representatives in January.

The group already includes 76 officers, four of whom are colonels. And while that number is also quite small in comparison to the 1.4 million troops now on active duty, some participants and observers expect it will continue to grow rapidly, exposing significant and expanding disillusionment with the war in Iraq among the rank and file.

A minority of the troops who have signed on so far are reservists, while more than 75 percent are active-duty service members -- more than 60 percent of whom have served in Iraq. They include people like Madden, who served in Haditha, Iraq, with the 1st Battalion, 23rd Marines in late 2004 and early 2005.

"Joining the Marine Corps was one of the best decisions I've ever made," Madden told me over dinner in Washington, about a 45-minute drive from his post at Quantico, Va. But he harshly criticized what he considers to be a botched strategy -- along with the shifting rationale for the war, its high human toll and the poor prognosis for success. He said there is "an implied trust" between soldier and government that the military will not be ordered into a dubious, costly adventure. "When it becomes blatantly evident that you are being exploited then it is justified for those in the military to dissent," Madden said. "This war is not right."

The top brass has taken notice. Organizers say they got a call last week from staff on the Joint Chiefs of Staff, who asked for details on the number and kind of troops signing on to the protest.

The organizers believe they are operating in bounds, and so far they've gotten little pushback from above. In a statement to Salon, Pentagon spokesman Maj. Stewart Upton said, "The members of the Armed Forces are free to communicate with Congress in a lawful manner that doesn't violate the Uniform Code of Military Justice." The policy states that "Members of the Armed Forces shall be free to make a protected communication to a member of Congress" without reprisal.

Still, there are some lingering concerns. Madden says he received one angry e-mail from a lieutenant colonel outside Madden's chain of command berating him for speaking out.

At a White House press briefing last week, press secretary Tony Snow dismissed the protest effort as tiny, and suggested the participants were not "proud" of their service. At that time, only 65 service members had signed on. "You get 65 guys who are, unfortunately -- no, not unfortunately -- 65 people who are going to be able to get more press than the hundreds of thousands who have come back and said they're proud of their service," Snow told reporters.

Madden says he takes pride in his service to his country, and that he loves the Marine Corps.

David Segal, director of the Center for Research on Military Organization at the University of Maryland, said he thinks that disillusionment about Iraq is "latent but widespread" among troops. "I think they are expressing a sentiment that is really there," he said, referring to the small but growing group of protesters. "I think we could see a newly emerging soldiers' movement," Segal said. "I don't think it is there yet. But the germ is there."

Madden admits that it is difficult to say exactly how many of his fellow Marines quietly agree, beyond those who have participated in the campaign. A drafted soldier in the Vietnam era might have been quicker to make his voice heard. But fear of retribution prevents professional service members in particular from voicing their concerns in order to protect their careers.

Yet the silent resistance runs deep, Madden believes. "It is more than anybody would ever admit," he explains. "A lot of people are in the military for life, because of their economic situation. But their hearts may be against this war."

At least some measure of that sentiment has surfaced recently: A February 2006 poll by Zogby International showed that 72 percent of troops serving in Iraq thought the United States should get out by the end of the year.

Well-spoken at dinner, in a button-down shirt and wearing close-cropped hair, Madden stood in stark contrast to the ethos captured in a Nov. 10, 1970, CBS News program, which showed troops from the 1st Air Cavalry Division in Vietnam smoking pot through the barrel of a shotgun. A common form of protest at that time was to flat-out refuse to go on dangerous patrols into the jungle.

Madden, however, said he would not disobey an order. He points to his Iraq deployment. "I went to the war opposed to it," he told me. "I put my feelings on hold."

That professional tone is readily apparent in the text of the appeals for redress. The statement, to which individual service members add their names, reads: "As a patriotic American proud to serve the nation in uniform, I respectfully urge my political leaders in Congress to support the prompt withdrawal of all American military forces and bases from Iraq. Staying in Iraq will not work and is not worth the price. It is time for U.S. troops to come home."

Organizers of the effort, including Madden, have also been careful to follow military rules, which allow soldiers to express themselves while off duty, off base and out of uniform, but which still restrict criticism of their superiors.

The campaign of appeals to Congress is largely the brainchild of Jonathan Hutto, a 29-year-old Navy seaman based in Norfolk, Va., recently named the best seaman of the quarter on his aircraft carrier. While floating off the coast of Iraq in December 2005, Hutto read "Soldiers in Revolt" by David Cortright, a chronicle of the GI movement against the war in Vietnam.

Back in Norfolk in June, Hutto invited Cortright to town to address an off-base meeting of about 100 like-minded people, including many military service personnel. Madden happened to be in town visiting a friend and he went to see Cortright speak. Then Madden and Hutto began exchanging e-mails, and the movement took shape.

Hutto says that while he drew on the GI movement in Vietnam for inspiration, he describes this effort as more "mainstream" than the antics exercised by the soldiers in Vietnam.

Cortright, who was active in the GI movement during Vietnam and is now a research fellow at the Joan B. Kroc Institute for International Peace Studies at the University of Notre Dame, has become an advisor and organizer of the protest movement. "This is an incredibly elegant and interesting way for service members to express their feelings about the war, in a legal way, to their congressional reps," Cortright said in a phone interview. Despite the formal approach, he added, the appeals are based on powerful personal convictions. He said they "reflect this growing feeling in the ranks" that the war in Iraq "is not working."

While the methods may be different from Vietnam, Cortright said he detects a striking similarity in the disillusionment among service members from both wars -- particularly as the mission in Iraq becomes increasingly unclear to troops there, and the war continues to "drift sideways," as Senate Armed Services Committee chairman John Warner put it early last month.

The movement includes soldiers who say they still love the military, but are angry because it is unclear to them just what they are supposed to be doing there. Daily patrolling through Iraq's dangerous streets serves as one example.

"There is a civil war going on and we are stuck in the middle of it," one female Army soldier, who had returned from Iraq in September, told me. She has signed on to the current protest to Congress, but did not want her name to be made public out of fear that it might hurt her military career. She said of the daily patrols: "You go out and you drive around the city to show a presence. Sometimes you stop and search houses. But a lot of times you drive around for a while and drive back, unless you get hit, and then you come back a little earlier. In some places, you were guaranteed to be hit within 15 minutes."

Some veterans of Iraq believe that active-duty soldiers do not have the right to protest the war. R. Allen King, who served as a Civil Affairs and Psychological Operations officer in Iraq and is author of the book "Twice Armed," said it sets a dangerous precedent if soldiers start voicing which conflicts they support, and which they don't. "If you did not like it, you did not have to join," King argued. "The fact is that we went to Iraq as a unified nation. Now that we are there, we have to figure out how to win for the Iraqi people."

Retired Lt. Gen. Robert G. Gard, now a senior military fellow at the Center for Arms Control and Non-Proliferation in Washington, acknowledges there is debate about whether service members should speak out. "That is a tough question to come down on," Gard said. "We have a social contract in this country that the military does not question the civilian control over it."

"But the flip side," Gard continued, "is that there is an implicit assumption that they will not put the military into harm's way and accept casualties except in causes that are reasonably in the national interest. In this case, I can't find a rationale that makes any sense."