George Allen's defeat in Virginia won't be official until the last votes are recounted -- but win or lose, he has been beaten to a shell of his good ol' boy self. 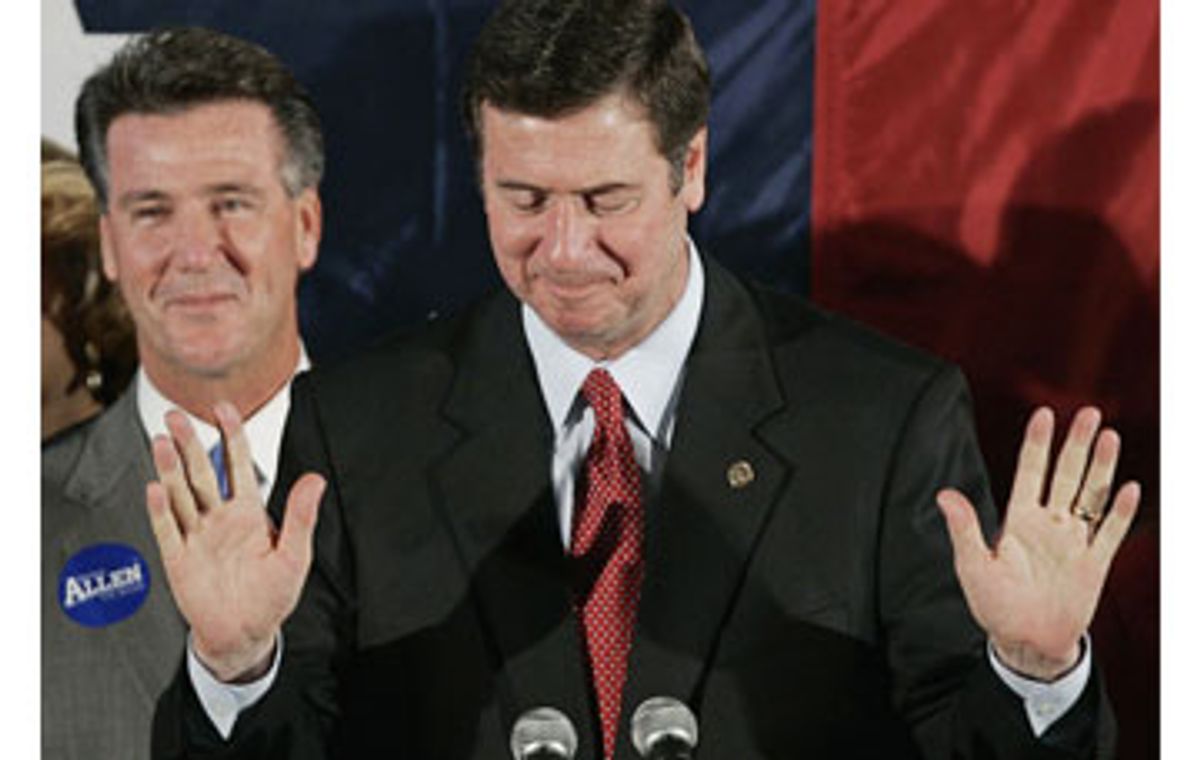 He already lost. Sen. George Allen's crusty-eyed Republican handlers will spin this as not over -- officially, Democrat Jim Webb was ahead Wednesday by 8,359 votes with 99.75 percent of the precincts reporting, falling under the mandatory state recount threshold of .5 percent -- but Allen's political career is officially kaput.

Sure, he could still win after the precincts recount votes and the absentee ballots are counted, but Allen has become only a shell of his former self.

For most of Tuesday night Allen clung to a 50-to-49 percent lead over Webb, usually leading by somewhere between 20,000 and 30,000 votes, and the Allenistas crammed into the downtown Richmond Marriott were feeling the buzz of victory. There were hootin' and hollerin, fist-pumping cheers, roars of victory. Virginia's handsome Republican attorney general, Bob McDonnell, summed it up with a clap.

"Are you ready for a big celebration?" he barked into the microphone.

"Yeesss!" the crowd shot back.

"You're the reason we're having a great big victory tonight," McDonnell baited. "This is a party on the upswing!"

Less than three hours later, McDonnell spokesman Tucker Martin found himself explaining why the attorney general couldn't share the same stage with Allen. Because the race was so close, Tucker explained at 12:45 a.m. Wednesday, McDonnell had to remain impartial while he oversees the recount as the state's top lawyer. You know, technically speaking.

As a shellshocked crowd of supporters withered out of the hotel, the Republican victors continued their defiance. Suddenly, their upswinging GOP was caught in a "tailwind," as Virginia Lt. Gov. Bill Bolling told reporters in the hotel lobby. "This is a race we should have won by double digits."

One could feel the gyrations of Allen's political timeline unfurl in the hotel ballroom. A tough-as-nails governor who swooped into the Executive Mansion amid a national GOP whirlwind in 1994, Allen once threatened to "knock" Virginia Democrats' "soft teeth down their whiny throat" in the run-up to the Republicans' takeover of the Virginia General Assembly two years later.

But that Allen left the fraternity. He dropped 15 pounds and shed the arrogant pudge that had split so many Virginia households. The husbands loved ol' George, the football quarterback, son of a famed Washington Redskins coach. The wives, well, not so much. It was his smirk, the snuff dipping, his handing out Virginia-made cigarettes to smokers he'd run into during grip-and-grins.

Allen's wife, Susan, helped smooth over his edges. And perhaps his race with Webb wouldn't have been as close without Susan front and center, with her cheerleader smile and down-to-earth persona. She went everywhere, stumping for the big lug, chatting up coffee shops and women's clubs throughout Virginia. She somehow made the snuff-dipping good ol' boy who kept sticking his boot in his mouth a little more palatable.

Susan was firm and strong, her jaw set firmly as she stood by her man early Wednesday morning. Allen, on the other hand, looked beaten. He sounded the call for his "patriots" to keep fighting for the recount, but his rosy cheeks were about to burst. He first thanked God, of course. But Susan ran a close second: I thank "my wonderful wife, Susan, which is the reason why so many of you all like me," Allen conceded.

In the crowd, of course, the restless wannabe victors were ready to blame the media. "Just one slip of the tongue," offered a dismayed John Huffman, referring to the now-infamous "macaca" comment that opened the first door for Webb. "Where Allen messed up is he didn't bring his accomplishments to the forefront," Huffman, a retired Philip Morris manager, said.

Not even the bourbon could help Travis Grizzard, a medical sales manager from Hanover County, when the bad news flashed on the giant screen. Allen was losing for the first time around midnight. "I thought it was over," Grizzard said, expressing a popular sentiment, when Allen failed to make the anti-gay marriage amendment, which passed handily, a centerpiece of his campaign. "He should have had more of an emphasis on marriage between a man and a woman," Grizzard said.

Amid all of the disappointment, though, there were bright spots. Allen had broken through to some segments of the black community, and gotten the nod of approval from several black ministers in the Richmond area. Webb, of course, had the blessing of former governor and now Richmond Mayor L. Douglas Wilder, the brightest political star in the state's African-American history, but Allen was making some progress. State Sen. Benjamin J. Lambert III, who served as Wilder's first campaign manager decades ago, came out in support of Allen.

Lambert spent most of Election Night in Allen's hotel suite, watching intensely as the results came in and the lawyers began to strategize. A Democrat, Lambert is one of Richmond's most popular black politicians. His support of Allen sent a shock through the community, and it earned Allen the endorsement of the Richmond Voice, one of the city's two African-American newspapers. (The more influential Richmond Free Press supported Webb.)

Richmond Rev. Joe Ellison Jr., an African-American pastor, has organized a group of local black ministers to meet with Allen to discuss issues of importance to the local black community. He's met personally to pray with Allen "four or five times," he said. For a Republican senator with an affinity for Confederate flags and, allegedly, locker-room racial epithets, these were steps in a new direction.

Ellison, like Lambert, saw Allen's courtship as an opportunity. "If he loses, I'm losing my only White House connection," Ellison complained as he stood by the bar at Allen's "victory" party. "This has turned into a political nightmare."

Maybe Allen will pull out a last-minute upset, as improbable a victory as the Redskins' time-expired field goal over the hated Dallas Cowboys in Landover, Md., Sunday, where Allen spent the afternoon working the tailgates.

The recount could take days, probably weeks, says Lt. Gov. Bolling, but the rising star that was George Allen seems now a distant memory, the can of snuff now just an imprint in his back pocket.

As his father stood on the stage with Allen, a young Benjamin Lambert IV found himself bemused by the spectacle. Sure his father supported Allen, but the Lamberts are still Democrats.

"I think it's just awesome," he said, surrounded by deflated Republicans. "Democrats are taking over."