After a long night, big Jon Tester claims victory and delivers the U.S. Senate to the Democrats. 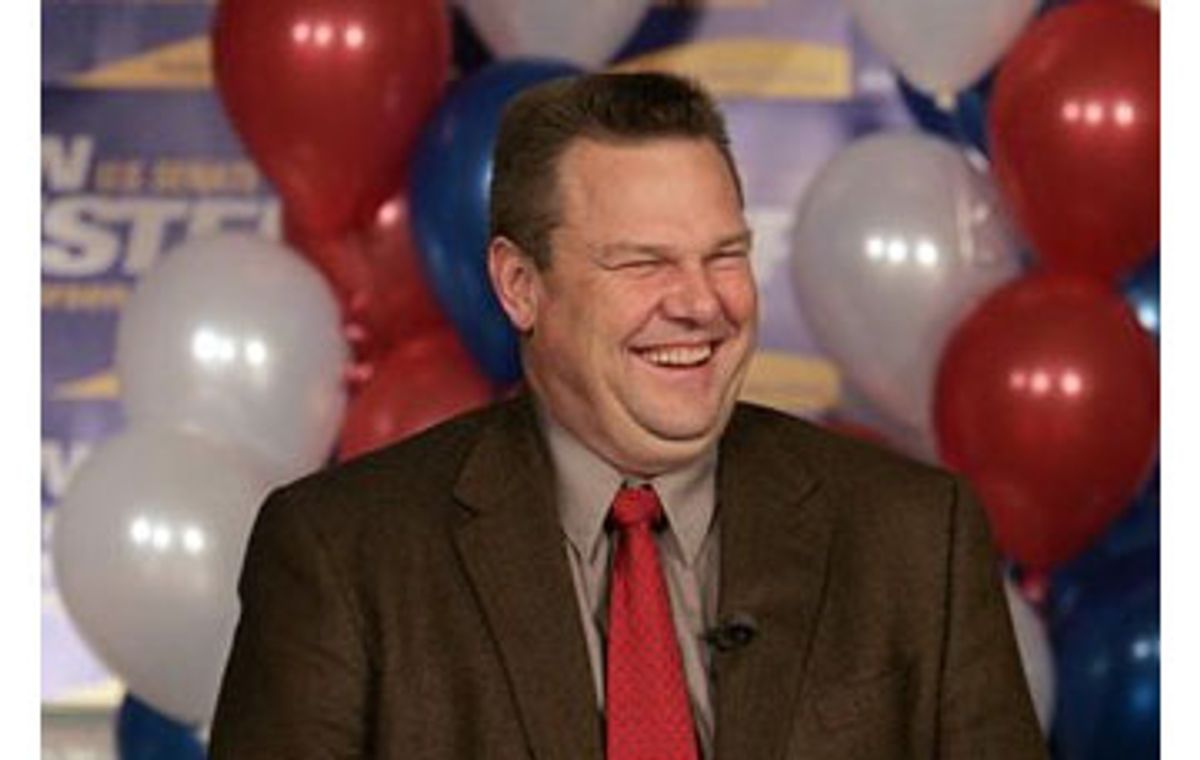 "Settle in, and get yourself a stiff drink," suggested Montana Gov. Brian Schweitzer to a ballroom filled with worried Democratic Party faithful just before the bars closed on Election Night. The state -- and the nation -- were waiting to see if the razor-edge lead of Democratic senatorial challenger Jon Tester over incumbent Republican Sen. Conrad Burns would hold. "Tomorrow, we are going to have a new senator, and his name is going to be Jon Tester."

Not long after, shirttails flapping and oozing confidence, the candidate himself bounded to the podium to reassure his cheering supporters. Tester, a 50-year-old farmer from Big Sandy with a flattop haircut, said he knew he would win. "A campaign is like a field of wheat," he said, urging patience. "You gotta let it dry out a bit."

Later, in a tour of the bar next to his campaign party palace, Tester pressed flesh and announced that he was going to bed, but waking up a winner.

Gov. Schweitzer, however, was speaking from experience about long nights and close races. In his first run for any office in 2000, he narrowly lost a contest for the same Senate seat to Conrad Burns. He knew which counties and districts to watch for through the agonizingly long night.

And while Tester slept, the Democrat's margin dwindled from some 14 points around midnight to less than 1 percent by dawn. A five a.m. hiccup allegedly had the vote turning in Burns' favor.

But by 10 a.m. Wednesday, Mountain Standard Time, the haggard, unshaven and still garrulous Gov. Schweitzer, who never met a crowd he didn't like, was once again in front of one, declaring Tester's victory.

"It's over," he told Salon, citing figures from three problematic districts that he claimed cinched Tester a seat in the U.S. Senate. "The only thing the Republican Party establishment can do at this point is send in a pack of Philadelphia lawyers in their $2,000 suits."

Fat chance in a state with a real aversion to outside meddling, and where the new senator-presumptive is a man who actually looks natural in his cowboy boots, denim shirts and bulging waistline.

Oh, and don't forget Tester's trademark "hook em horns" left hand, which is missing the three digits between the pinkie and the thumb, lost in a meat grinder as a kid.

That is the sort of working-class accident that a lot of ranch hands, tractor drivers, smoke jumpers, firefighters, policemen, mechanics, carpenters (many now serving in the Montana National Guard in Iraq) and just plain folk can relate to out in Big Sky country, and certainly helped turn the corner for Tester in his almost Cinderella campaign to unseat Burns. The "what-you-see-is-what-you-get" profile of a fourth-generation dryland wheat farmer (organic, nowadays), coupled with Tester's straight talk about everything from the Patriot Act (get rid of it) to the war in Iraq (bring the troops home now) to the undue influence of lobbyists in Washington (Abramoff) and the general sense that his opponent had become a walking embarrassment across the political spectrum in the Treasure State, all conspired to bring an end to the long and storied career of Conrad Burns.

Burns, famous for his punchy speech (including the occasional ethnic slur), cowboy hat and good ol' boy, glad-handing ways, strode the stage of Montana politics for the past 18 years, during which tenure he gained the reputation of bringing home the bacon to this beautiful but subsidy-dependent state. A sample of voters who admitted voting for the former senator -- often against their conscience -- revealed that the one issue that tipped them back into the Burns camp was the prospect of losing federal pork. Along with that claim, his campaign was essentially based on calling Tester a "Brokeback Democrat" who was just "too liberal for Montana."

The irony is that Burns may have sabotaged his campaign less by his association with the Bush administration's security policies, the war in Iraq or even the Abramoff scandal than by one single remark in his hometown and deep base of Billings, the largest city in Montana and one that runs on oil, cows and conservative sentiment. There, bumping into a knot of elite "hotshot" firefighters battling blazes at the height of "smoke season" in this tinderbox state, he was captured publicly berating them for doing a "piss-poor job" risking their lives to save multimillion-dollar spreads nestled in near-wilderness areas. The remark galvanized the generally conservative 1,000 or so rural and municipal firemen into a political action group who called themselves Fire Fighters for Tester, and they turned on Burns with a fury, dogging the beleaguered senator down every stop on the campaign trail dressed in yellow shirts emblazoned with the words "Fire Burns."

"I would describe myself as an open-minded independent who tends to lean to the political right," said Chris Bruha of the Livingston and Park County fire department. "But those words made me snap."

That attitude was soon mirrored across the blue-collar bedrock of the state, underlining the personal, independent nature of politics around here. Usually viewed by outsiders as red, Montana is actually better viewed as deep purple. The iconic Jeanette Rankin, the only member of Congress to vote against both World War I and II on pacifist grounds, was elected to the House before women's suffrage. Ross Perot scored something like a quarter of the state's vote on his first bid for the White House, and in the 2004 elections, voters overwhelmingly threw out the Republicans from virtually all posts of significance, but also voted for George W. Bush -- mainly because he was not John Kerry.

In a last sign of desperation, Burns had President Bush show up to stump for him in Billings. But even W. could not save Burns from the flames.

At 11 a.m. local time on Wednesday, Jon Tester was finally able to claim victory. "It is time to put politics aside and work together on important domestic and foreign policy issues," he said in brief remarks before a bank of cameras.

The Burns campaign has announced that it will be "making a statement" by early afternoon.