As Arbus, Nicole Kidman radiates warmth and empathy that are nowhere to be seen in the photographer's work. 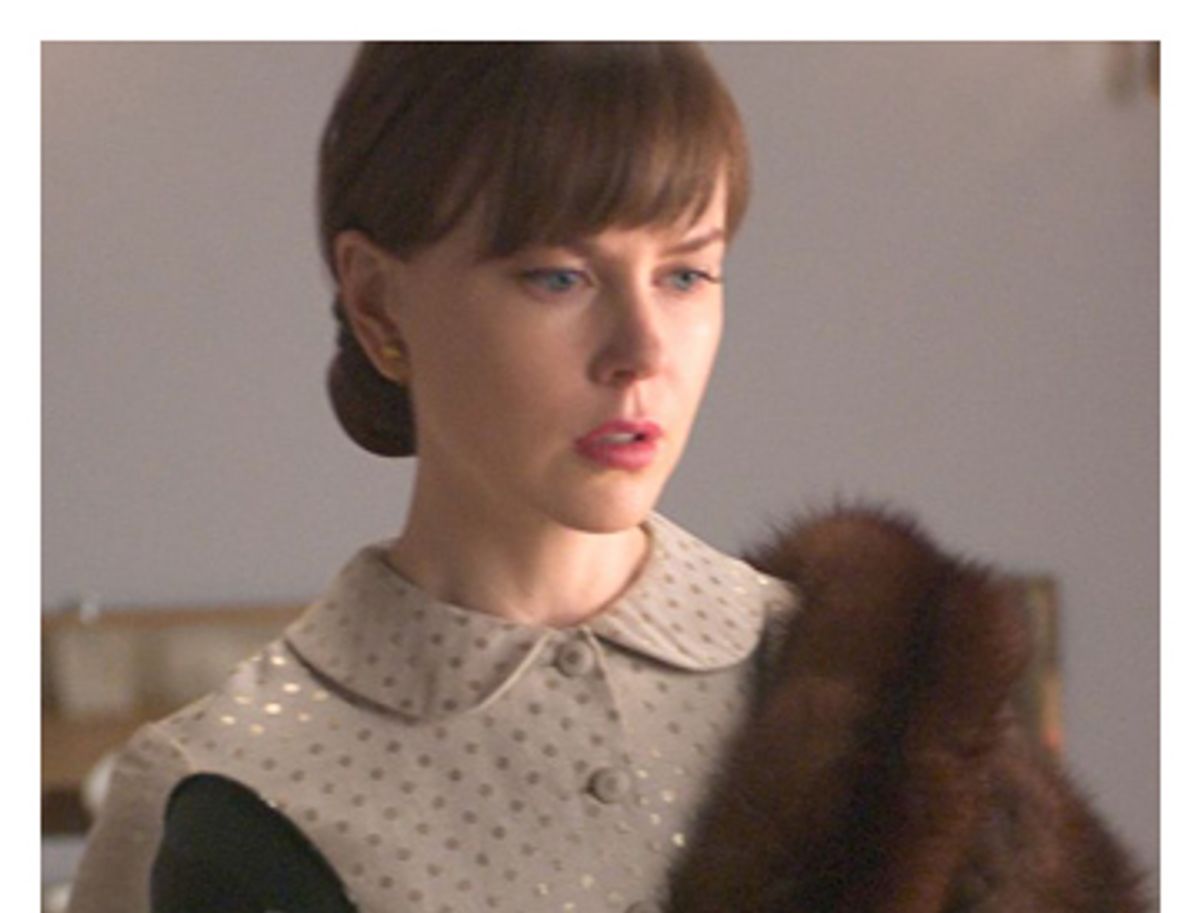 "Fur: An Imaginary Portrait of Diane Arbus" may be many things. But as a portrait of the photographer Diane Arbus, who made a name for herself with her pictures of circus freaks and expressionless children (among other subjects), it is definitely -- as an elaborately calligraphic title card at the beginning of the picture informs us -- imaginary.

Director Steven Shainberg and writer Erin Cressida Wilson last collaborated on the 2002 "Secretary," an openhearted and liberating picture about the inexplicability of sexual desire, and of love. Shainberg and Wilson's impulses are equally generous here -- too generous: This Diane Arbus, as she's portrayed by a tremulous Nicole Kidman, radiates warmth and empathy that's nowhere to be seen in the work of the real Diane Arbus. "Fur" is intended to be a tribute to Arbus, but it's more a fancifully embroidered tapestry of wishful thinking: The movie asks us to believe that the woman behind the camera was actually a nice person, which is a lovely idea, until you actually look at her pictures.

The movie opens with Kidman's Diane traveling somewhere -- we dont yet know where -- on a lowly bus, camera in tow. It's 1958. We'll learn later that for years Diane has been helping her husband, Allan (Ty Burrell), run a successful commercial-photography studio. Diane's moneyed parents, David and Gertrude Nemerov (Harris Yulin and Jane Alexander), weren't crazy about the match, but they've helped the couple by giving Allan advertising work for the tony department store David runs. The Nemerovs stage a fashion show in the Arbuses' semi-modest (by rich people's standards, anyway) Manhattan apartment, trying to entice fur buyers by showing svelte models dressed in the season's most fashionable pelts. We get grotesque close-ups of those buyers' leering, chewing mouths, a way of signaling how Diane, a misfit in her own genteel family, sees them.

Diane's taste in furs runs to a shaggy topper that might have been borrowed from Magilla Gorilla. Pay close attention, because this coat will be the symbolic key to "Fur." But before the significance is revealed, the movie shows us the life Diane led before she started taking pictures herself. Her husband has bought her a camera of her own that she hasn't picked up, although he's encouraged her to learn how to use it. She resists -- until she meets a mysterious new neighbor in her building, Lionel Sweeney (Robert Downey Jr.).

Diane is intrigued by Lionel, a gentleman who, in public, wears elaborately decorated ski masks. Later she learns that he's completely covered in wavy, silky brown hair, à la Jean Marais in Cocteau's "Beauty and the Beast." (His regally tailored clothes are not so much a second skin as his only skin -- they're the only protection between his soul and the cruelty of the world.) Formerly a sideshow attraction, he's now a wig maker, and he works out of his apartment, which is really less of an apartment than a dream castle, furnished with oddball curios and velvety drapes. It even has an indoor pool, a bath for a Roman god.

Shainberg shows us every tentative stage of this sort-of love story. But while "Fur" may be about eroticism, it isn't erotic. There's something clinical and mechanical about it, even though Shainberg is making every effort to mine his imaginary Diane's true feelings. (The movie was inspired by, but not based on, Patricia Bosworth's "Diane Arbus: A Biography.") One of the chief problems is the casting. Kidman is a lovely presence, although her gifts have the elusive quality of light showing through porcelain: She's been marvelous in pictures as disparate as "Moulin Rouge" and "The Others," and she's even charming in the otherwise wretched "Bewitched." But in so many of her other performances, including this one, she simply gives the impression of being perpetually perched on the edge of a teacup -- there's no going forward and no falling back, just a lot of delicate balancing. She's played many different characters in her relatively brief career without yielding many surprises; after we're done admiring her translucence, we start to wonder whether there's anything more to see.

Downey's performance is something else entirely, an elegant, discreet cry of anguish. Downey is the most naked of actors, which is why, covered in fur, he's so fascinating to watch here. Every wound Lionel has ever suffered is right there in his eyes, and in his voice. But his body, a hirsute wonder, is free; he moves with the grace of a dancer or a willow tree, his bones and muscles, if not his skin, immune to the joke nature, or God, has played on him.

We can see why this fictional Diane Arbus would be entranced by Lionel. But the movie's fairy-tale glow -- even tinged, as it is, with a kind of morbid sensuality -- is worlds apart from the pictures taken by the real Diane Arbus. The movie Diane Arbus looks on warmly as a parade of Lionel's friends -- dwarves, giants, transvestites, people with various physical deformities -- troop into her flat for a party. But the portraits taken by the real Diane Arbus have a distinct sense of otherness: She doesn't commune with her subjects -- she displays them. There's rarely any evidence that she actually likes them, or has even thought about them as human beings.

Many people love Arbus' work, or at least genuflect dutifully before it. But when I look at her pictures, I see not a gift for capturing whatever life is there, but a desire to confirm her own suspicions about humanity's dullness, stupidity and ugliness. When she photographed two young women with Down syndrome, grinning at the camera in their cardigans and floppy Easter hats, she rendered them as novelties for the benefit of her repulsed fascination. Her famous portrait of twin girls, standing stiffly in matching dark dresses, has a chilly, derisive aura about it, as if their childhood were standing in the way of her art. Her portrait of the infant Anderson Cooper -- son of Gloria Vanderbilt -- has the distinct (and probably intentional) look of 19th century mourning photographs of dead babies in their coffins: And a happy Mother's Day to you, too.

But even those who see Arbus as great would probably concede that not all great artists have to be likable: Picasso, after all, was an ace cad. So it's difficult to fathom why Shainberg and Wilson, as well as Kidman, have taken such great pains to make their mythical Diane Arbus so cuddly. The picture also makes some dim efforts to address the repression of women in the '50s, offering Arbus -- who was born in 1923 and committed suicide in 1971 -- as a pre-"Feminine Mystique" feminist icon. But its exploration of the way women suffered, and triumphed, in '50s America is only cursory. (Last year's wonderful, and little-seen, "The Prize Winner of Defiance, Ohio," which starred Julianne Moore as a jingle-writing housewife, offered a far more complex view.)

And what are we to make of the mythical Diane's rangy fur coat, the one we see her wearing in the movie's last scenes? In the movie's view, it seems to be a metaphor for the way Arbus put herself in the skin of her subjects. But the pictures taken by the real Diane Arbus show no such compassion. The real Diane Arbus knew a good subject when she saw it -- she just didn't want to get close enough to touch it.