Russell Crowe charms his way through this well-intentioned comedy based on a book by Peter Mayle. 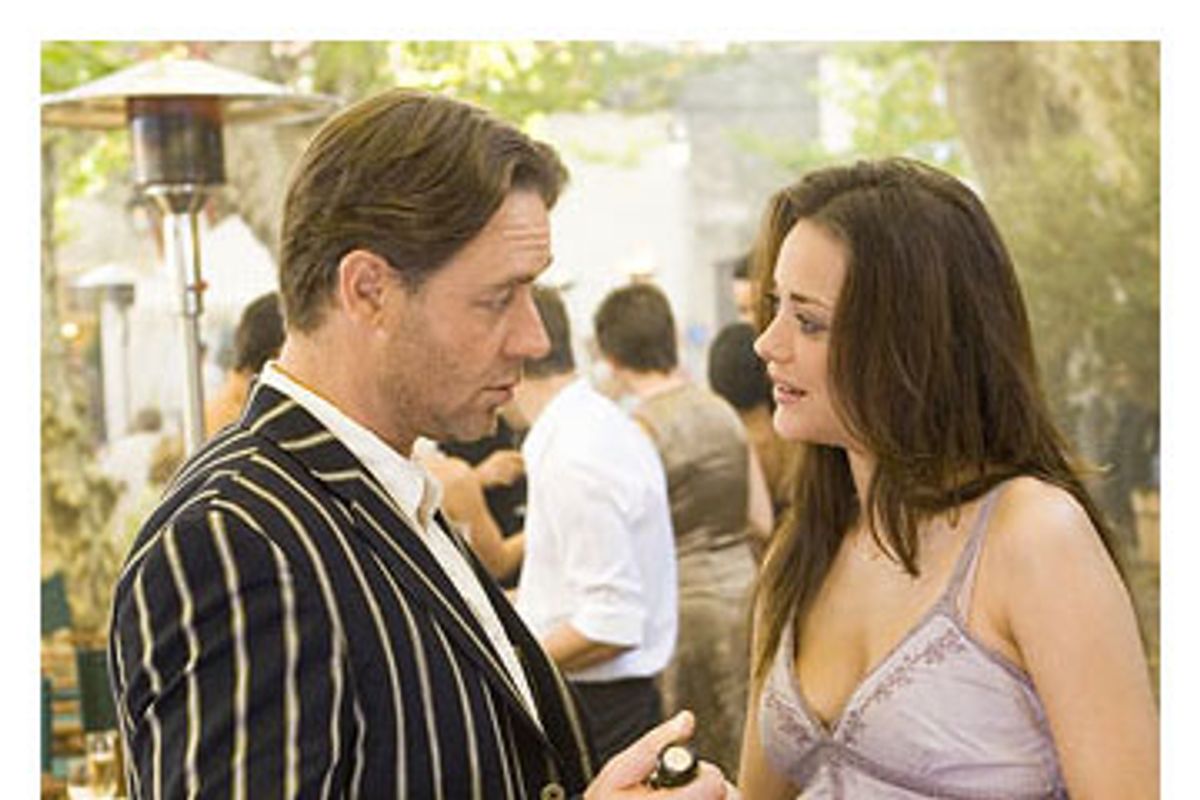 Ridley Scott's "A Good Year" is a bonbon made by a mechanic, a well-intentioned diversion put together by someone who clumsily adds the right ingredients in the wrong proportions at the wrong time. But sometimes, if you get the sugar level close to right, you can do OK, and "A Good Year" offers some pretty basic pleasures that movies often fail to give us these days. Scott adapted the picture from a book by cottage-industry memoirist and novelist Peter Mayle, and like all of Mayle's stories, it's set in the South of France. The picture, shot on location by Philippe Le Sourd, has a pearly, sunlit glow -- and while any movie shot in the South of France had better look good, there's still something to be said for the confounding bliss of sitting in our local movie theater and yet feeling that we're far, far from home.

"A Good Year" is a comedy, and that's a stretch for Scott who, lately, has leaned more toward magnificent he-man epics like "Gladiator" and not-so-magnificent ones like "Kingdom of Heaven." He doesn't have a knack for comedy -- his touch isn't light enough, and his rhythms have a metallic clank. But the rapport he has with his star, Russell Crowe, counts for something: Crowe, sometimes a wonderful actor and sometimes a drearily self-serious one, hasn't done a comedy in years, and he's charming here in a way he hasn't been -- possibly hasn't allowed himself to be -- since, perhaps, "The Sum of Us" (1994) or Clare Peploe's lovely, overlooked 1995 "Rough Magic." Crowe can't single-handedly turn Scott into a good comic director. But the picture has a friendly, affable vibe, a spirit something like the loose-jointed give-and-take of part-time jazz musicians trading phrases -- any mistakes made by one are quickly rabbited over by the other, until, in the mix, they cease to matter.

Crowe plays Max Skinner, a London-based high-finance type who is, to put it plainly, an asshole. Before a day of not-quite-ethical trading, he rallies his underlings with the warrior cry, "Today is Greedy Bastards Day!" Later, he spouts words of wisdom like "Winning isn't everything -- it's the only thing."

But before Max was an asshole, he was a little boy who spent a lot of time on his Uncle Henry's Provençal estate. Henry (Albert Finney, who gives a wonderfully rumpled performance in a relatively small role) is the guy who taught young Max (who's played by Freddie Highmore, from "Finding Neverland" and "Charlie and the Chocolate Factory") the essential rules for living: A good blue suit is your best ally; there are few greater pleasures than good food and wine.

Max hasn't been in touch with Uncle Henry for years, and one day he gets word that the old man has died, leaving the estate to Max. Max, of course, sees dollar signs, and he enlists his best friend and lawyer, Charlie (the perpetually fantastic sidekick Tom Hollander), to unload it as soon as possible.

There are complications, of course, and if you've ever even glanced at a Peter Mayle book in a bookstore (or even if you haven't), you can guess what they are. Max sees the place and slowly falls in love not just with it, and with the beauty of the countryside, but with the way of life that comes with it. The allure of local babe Fanny Chenal (Marion Cotillard, who played the angel of death from "A Very Long Engagement," and who, with her fiery coquettishness, makes the most of what this role asks of her) sure doesn't hurt. And to further spice things up, there are complications in the form of a possible challenger to Henry's will, a young American free spirit named Christie (Abbie Cornish, an Australian actress who gave a terrific performance in Kate Shortland's 2004 "Somersault," released here earlier this year).

The plot of "A Good Year" has more absurd complications than it needs. Sometimes, though, what happens in a movie is important; other times, it hardly matters at all, if you can at least slip into the groove of what the actors are doing. The man to watch here is Crowe. Crowe is a marvelous actor, and a serious one. But he's often so serious that he comes close to snuffing out those flickers of spontaneity, of breeziness, that all great actors need to have. (That was especially true in his last movie, Ron Howard's "Cinderella Man," in which he plays boxing legend James Braddock. When Crowe plays a guy in danger of being crushed by the world, he carries the burden so heavily that it almost obscures him. It's a good performance, but not an agile one.)

But in "A Good Year," Crowe gets to make jokes and wisecracks that show off his boyishly mischievous comic timing. Max potters around his gracefully run-down estate in baggy pants, an old suitcoat and a pocket square -- it's a kind of shaggy-dog elegance that Crowe wears well. When the estate's longtime caretaker, Francis (Didier Bourdon), warns him off pursuing Fanny, telling him to "Leave pretty women to men with no imagination," he counters, "I'm a banker! I have no imagination!" and the line is funny not because of its actual words, but for the way it rolls off Crowe's tongue with the ease of an acrobat's tumble. Then there's the way Max, on the phone to Hollander's Charlie, tells him the estate isn't in bad shape at all -- just as a flock of indignant chickens crowd into the hallway, protecting their territory. Crowe does a take that's like a mini-homage to Buster Keaton, a bow of admiration, squeezed into a fraction of a beat, to every comic actor who has come before him. A good take is the simplest and the hardest thing for an actor to do. In "A Good Year," Crowe uses muscles he forgot he had. The stretching does him a world of good, and somehow, it even expands the movie around him.