Put aside stories of a freezing, exotic locale full of igloos and kooks in favor of these portraits of the hardscrabble -- and magical -- Northern state. 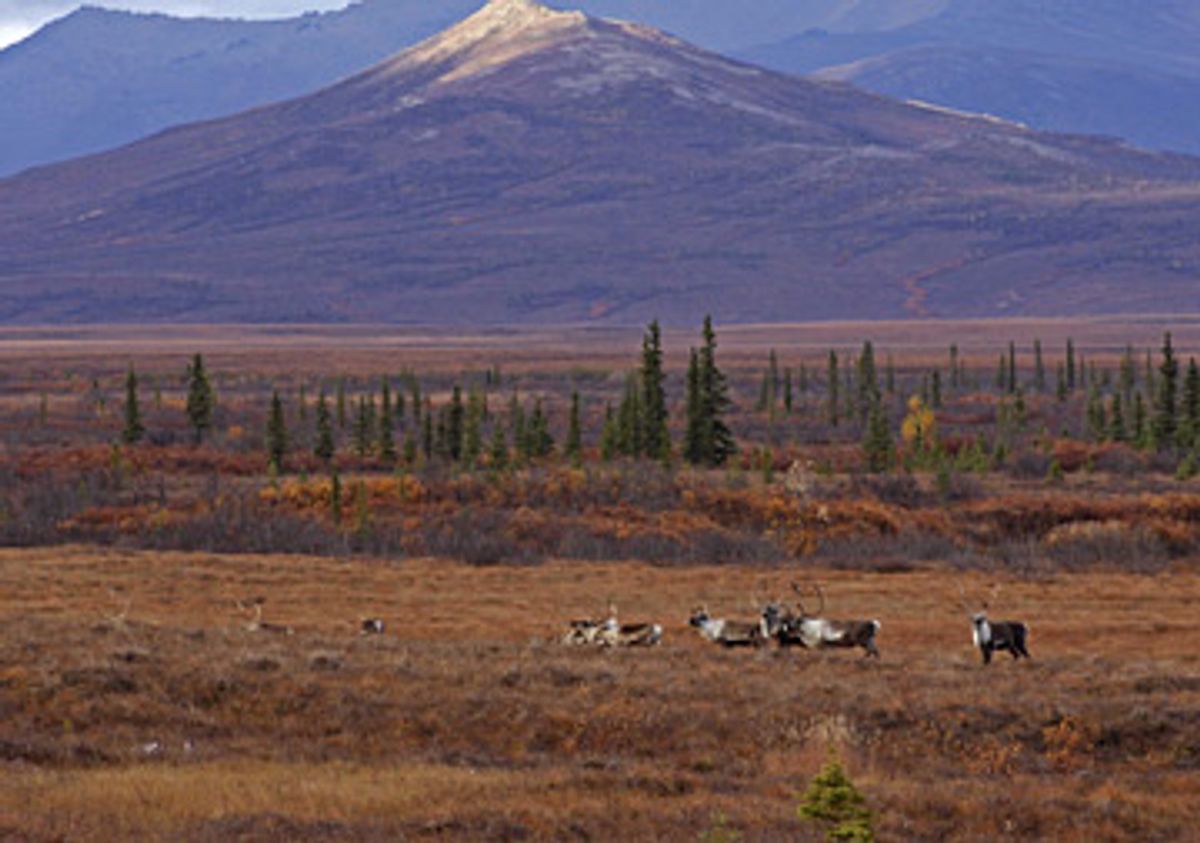 Happenstance and various provocations -- one being that Jack London lied about spit freezing before it hit the ground -- led me to writing.

Alaska -- a fifth the size of the contiguous United States, with far more total coastline, 150,000 bears, the tallest mountains -- has spawned a tradition of unnecessary literary exaggeration. As a result, traveling south from the territory (after 1959, the 49th state) to the lower 48 we Alaskans enter a fortress of nonsense about ourselves: All Alaskans live in ice igloos, at 40 below, on a windswept wasteland, six months of dark, six months of sun (yet allegedly with only one season), polar bears snarling at the door, buzzard-size mosquitoes, beaches of gold.

Through no choice or heroism of my own, I actually was born in a sod igloo in the Arctic and grew up running those huskies London wrote about. Wolves did howl at the dogs -- normal stuff -- but details he made into legend were absent: We never saw a hardworking sled dog nip a lazy one into line, never heard the alleged crackle of spit freezing in midair. One time it got to 72 below; my brother and I tried, different trajectories ... everything. Liquid -- yellow and otherwise -- arrived at the snow, same as always. Jack had exaggerated. And the Eskimo hunter culture I was raised in and around despised exaggeration.

Many have come north, been impressed, written. Every decade or so it seems a bestseller about Alaska is written by what we call "outsiders." In that genre, "Coming Into the Country," by John McPhee, is the most accurate, best known and loved book about Alaska; "Going to Extremes," by Joe McGinnis, is probably the best hated, most prone to exaggeration. The most recent one, well, I'm not even going to name it. Here in the North one thing we have always had plenty of is Alaska, so when it has come to entertainment, trappers and hunters and bush pilots have traditionally preferred Louis L'Amour (or, later, "Miami Vice") to tales of more tundra.

Yet there are plenty of books to recommend. The first comes from, of all places, Texas. John Taliaferro's "In a Far Country" (subtitle: "The true story of a mission, a marriage, and the remarkable reindeer rescue of 1898"), which will be published at the end of this month, is a tale of whalers and missionaries, a murder and a midwinter reindeer drive/rescue across the Alaskan Arctic in the 1890s. Sound like fiction? This book is true, all of it somehow sifted from diaries and historical accounts. And it's a hard one to put down.

The story begins in January at Cape Prince of Wales on the Alaskan side of the Bering Strait; Siberia is a seam across the western horizon. Missionary Tom Lopp is asked to lead a rescue north to Barrow. The trail through this narrative leads the reader to people whose names are legend along these coastlines -- we see the renowned Charles Brower (of the autobiography "Fifty Years Below Zero") in all his prowess on the ice off Barrow; Captain Michael Healy of the U.S. Revenue Cutter Bear, whose word was law in the Northwest Arctic. We smell the low igloos and sack holsters of fermented urine used to attract reindeer, hear the frenzy of attacking packs of dogs.

This story of Alaska Territory is incredibly well written -- authentic, informative and exciting. When I gave my manuscript copy to an elder who has lived in tents and cabins in the Igichuk Hills for half a century we both marveled, how could this middle-aged writer from Texas know the taste of cold, the feeling of weeks of wind, the smell of caribou hides?

Other books come from closer to home: "Alaska's Daughter," by Elizabeth Bernhardt Pinson, is the tale of a half-Eskimo woman growing up in the 1920s in the heyday of gold and reindeer, north of Nome. This book is full of the simple details of life on the Seward Peninsula in a time of rapid change. "Raising Ourselves," by Velma Wallis, comes from the interior, Fort Yukon, and is an unflinching account of a child of a hard-drinking native family. This book might be tough for some to read, but it shows a side of Alaska that, unfortunately, is as true as any, though left untouched by most writers. Few have had the courage (or authenticity) that this international bestselling Athabaskan writer had to write about this stage of her upbringing.

"The Wake of the Unseen Object," by Tom Kizzia, is a chronicle of the cultural change that has come to rural Alaska. In this heartfelt and personal narrative, Kizzia, an Anchorage Daily News journalist, tells of a journey through Alaska's bush in search of America's last aboriginal landscapes. And "The Last Light Breaking," by Nick Jans, offers an account of a schoolteacher and adventurer living among Inupiat Eskimos in the last quarter of the 20th century. Jans powerfully portrays the emotion of discovering himself entangled in a wild land and people as a storm of change fogs all the horizons.

There are more -- including Sherry Simpson's "The Way Winter Comes." Simpson grew up in Juneau. She is the epitome of our frontier's literary voice come of age. "Deep in my own ambivalence, I recognize a moral blind spot, a deliberate turning away from the way life and death proceed," she writes. "I wonder what goes on out there in the wilderness, where wolves kill moose and caribou, and men kill wolves, where something happens that is more cruel and honest and frightening than most of us can bear." Her writing -- about wolf trappers, bear biologists, ravens and herself -- is like Alaska, clean and real; the beauty of it can make your breath catch. "The Way Winter Comes" is brief, only 164 small pages; it's quiet and asks quiet questions, and is one of the most beautiful companions you could carry north.

This state remains America's stepchild and is exploited accordingly by whalers, miners and oil companies. You can look at National Geographic's May 2006 issue, "Selling Alaska's Frontier," to see oil-lease grids overlaying the map of the whole huge northern part of the state. Modernity is moving north. This leads me to Fairbanks writer Dan O'Neill (acclaimed author of "The Firecracker Boys") and his newest book, "A Land Gone Lonesome."

Again O'Neill has thrown his passions around a monumental subject: He begins at Dawson City in a canoe, and continues downstream, on the Yukon River, into the lives and changes to life along this great river -- changes that sum up Alaska past and present. Along the way his love for this land and its creatures pastels his prose. "I am captivated by the living painting before me," he writes. "As the sun goes down, the sky first ambers, then concentrates into an intense, blazing orange. Below, the river plays out, shining like a satin ribbon unreeling."

And: "Now it is dark, and the calls of the great horned owls are floating across the still air. A plea for company broadcast hopefully into the night. Over and over. Four notes, one a double. Short, long, short-short. The dit-dah of loneliness."

"A Land Gone Lonesome" has a current to it, and undercurrents too; it's a detailed float trip travelogue with a hundred-year history of the river's people woven in; it's funny, and full of quintessential Alaskans -- the dog sled mail drivers, miners, hippies and fed haters. There are gold claim jumpers, and gunfights as recent as 1977, and in there somewhere is the best bear story I've heard. But this book is a sad story, too. O'Neill spent probably half his life living, researching and finally writing this book. His love and concern for our great state, Alaska, pour out poetry on the page. This is a story of Alaska vanishing into 21st century America.

Born and raised in the wilderness of the Brooks Range, commercial fisherman and author Seth Kantner's writing and wildlife photography have appeared over the last 20 years in magazines in the US, France and Japan. He is author of the novel "Ordinary Wolves," which won the Milkweed National Fiction Prize and the Pacific Northwest Booksellers Association Award. Kantner is also a Whiting Award winner. He lives with his wife and daughter in Northwest Alaska.