I'm supposed to be inspired by women my age who run marathons and go back to college, but I'm too tired to be young. It's too much work. 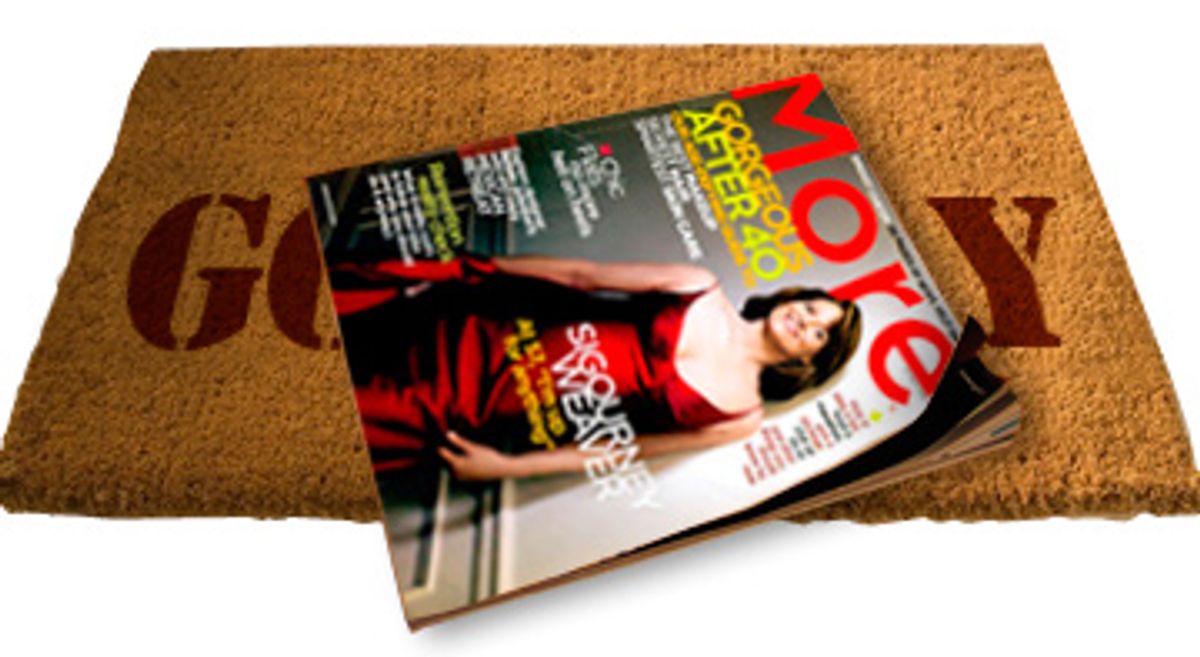 Once I turned 47 last year, I contemplated moving every few months so that the AARP storm troopers won't be able to sucker punch me with one of their unavoidable membership packages and assign me my very own congressperson to stalk about Social Security and hip replacement coverage. But I'm thinking now that I'll just pull up a nice rocking chair in the shade and let the wrinkled bastards find me. I'm too tired to be young anymore. It's just too much damn work.

Young people complain about the stranglehold we boomers have on the culture. But being forced to wait until our narcissistic parade passes by isn't half as hard as being forced to march in it, let me tell you. Every month, More, America's only magazine for "mature" women, is chock full of estrogen-fed Amazons in their 50s and 60s who can not only still fit into their Priscilla Presley knockoff wedding dresses but, two husbands later, are still friendly with the fool they married while they were wearing them. I stopped speaking to my husband before the reception was over. I was 40. We have two kids. I didn't fit into my dress during the ceremony.

I'm supposed to be inspired by the free spirits of women my age who are joyfully running their first marathons, getting Ph.D.s in Klingon studies, starting wineries in the Loire Valley or rebelliously letting their hair go gray. But if they were really like me, they still wouldn't know what to do with their hair, whatever its color, or even have a favorite brand of pantyhose yet. It's doubtful, too, that like me they're still getting most of their sustenance in the candy aisle at CVS.

I'm an almighty boomer: I'm supposed to have it all figured out, rewrite the rules, then force it on the rest of the country, but I'm just realizing that I don't even know what the questions are. More, which I usually devour and for which I have happily written, is the prime cheerleader for the "kick ass" old broad. I love it, but some months just the table of contents makes my ass feel pretty thoroughly pummeled. None of the women in the "Over 40" model search look a day over 25 and the chick making a six-figure living selling popsicle villages on eBay (post-cancer, post-divorce, post-sky diving of course) is schtupping a Brad Pitt look-alike half her age. I may be exaggerating a tad ... Still, guys like that call me "ma'am" and worry that I'll pass out trying to mow my lawn.

Granted, I discovered More when it featured Jamie Lee "killer bod" Curtis as she really looks along with her public apology for helping -- by being airbrushed and perfect -- to make us normal chicks feel bad about our cellulite and flatulence. But now, I'm becoming suspicious. Is More becoming the once-devoted "ya-ya" girlfriend for life who lost weight and suddenly won't stop asking if I'm ever going to the gym again?

This constant bombardment of the power of the menopausal is making me feel like a flat-chested 16-year-old eyeing the bustiers and garter belts all the cool girls are wearing to church: just what every woman needs, another way to feel inadequate. I remember the exact moment when I stopped reading glamour girl magazines like Vogue and Cosmo. It was two articles in the same issue: One said "Red is out. Do not wear red lipstick this season." The second said that, rather than settle for pantyhose that are less than a perfect match, you should, you must, go barelegged. It was a January issue. I clearly remember thinking, "Bite me."

Those two words buzzed anew in my head as a recent More cover warned of humiliation to come: "13 Things You Should Know by Now." I may not know much, but I definitely knew to rip that article out, unread, and burn it because I'm pretty sure I don't know. I'm equally sure that y'all need to back the "f" off with those never-ending self-improvement programs. A generation and three dress sizes later, I also know that there's just no hiding place from the female need to make ourselves crazy. The epistle intended to make me feel good about my gray chin hairs produced what can only be described as the involuntary skyward movement of both my middle fingers. The fact that the subtitle was something like "And if you don't we'll explain it to your dumb ass" did little to mollify me.

Now that a little time has passed and the Zoloft has kicked in, I realize that the girls at More just caught me on a bad day (fully medicated, I enjoyed the offending issue a week later). But, at 47, with two kids under 5, a bad divorce under my belt and a roller-coaster freelance writing career, I wouldn't mind reading more about women who are still struggling and less, frankly, about women who love their new macrobiotic lifestyles. These days, I can barely stay either awake or afloat, but I'm treated like I'm on the same subscription list with the perky Katie Couric and in the same tax bracket with Oprah Winfrey; I'm feeling a little cheated and not very polite.

To be fair, More always contains true-to-life pieces on women reduced to near poverty caring for elderly parents or making lattes after that Loire Valley winery went bust, but I guess what I'm asking for is not one "misery loves company" issue per year but maybe more stories about age not equaling wisdom. Where are the 50-year-olds who got crabs from that boy toy or the chick who saved all her life to afford that pied-à-terre in Paris only to learn that she loathed France? All I can say is, give up already, grannies of America! Where are the articles like "You Still Filing the 1040-EZ, Too? Right on, Sister!" or "Skip That Surgery: Sequined Appliqués for Those Varicose Veins."

Born in 1959, I was jumping rope during the civil rights movement and too busy learning to cook for a family of eight to notice the "libbers" burning bras. Vietnam? Much too gory for a preteen. Worse, by the time I was a teen in the mid-late 1970s, women were back to being whores for liking sex. By my mid-20s, when the "real" boomers had come down from their LSD trips and were making millions oppressing the masses, I got to have all the sex a slutty feminist could ask for, as long as I didn't mind risking herpes, AIDS, hepatitis C and the brimstone of the conservative Reagan revolution; no free love for me, yet I have to take the rap for Woodstock and Jane Fonda.

I haven't so much been marching in the boomer parade as sweeping up after its elephants. With the wisdom of age, and the prodding of my high-heel-induced aching bunions, rather than the witness protection program to avoid my dotage, I've decided to embrace geezerhood. I've earned it, goddamn it! So come and get me you old biddies. Bring some orthopedic shoes and some licorice with you, but hold off on those "empowering" mature women's magazines. Medicare Part D is damned stingy with the Zoloft.