In this political power couple, it's the woman who gets the first shot at being president. 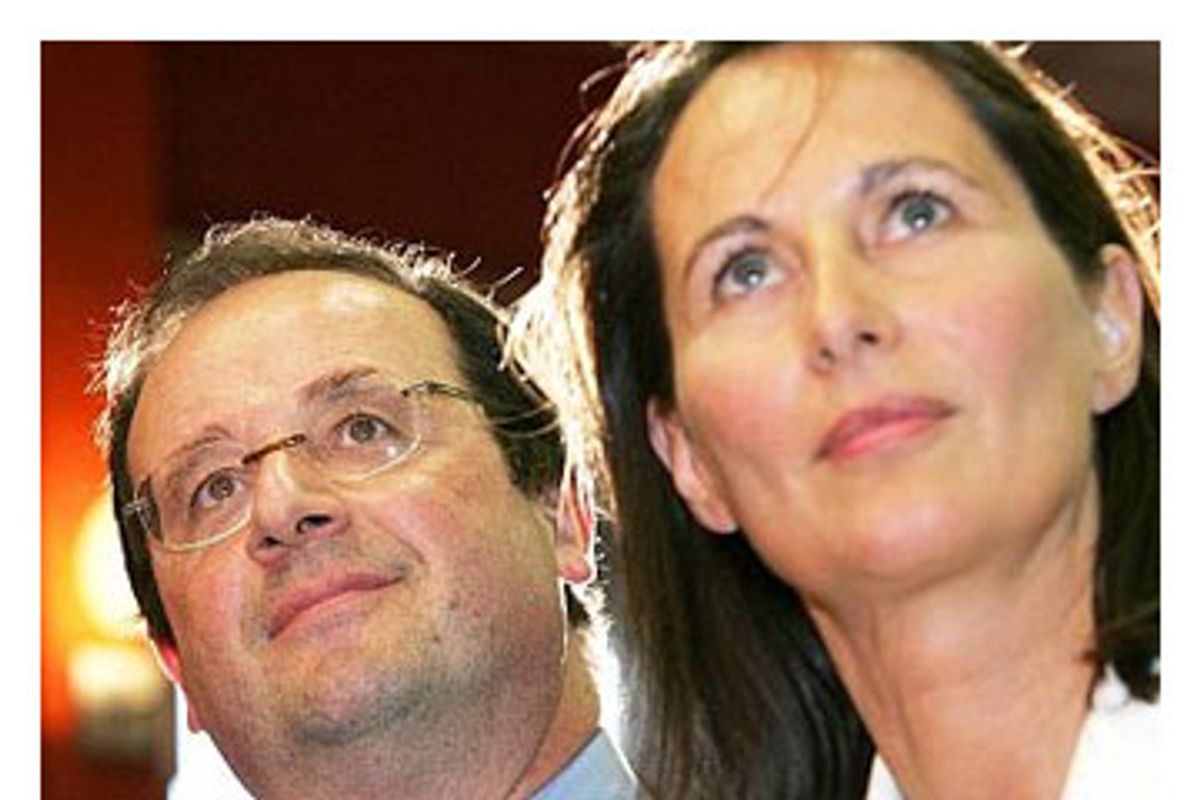 Imagine, if you will, a parallel universe, where a female politician's four out-of-wedlock children charm the voting public, where her bikini-worthy 53-year-old body is a valuable political asset, and where she is likely to become president before her more powerful male partner, the fellow politician with whom she had those kids.

Welcome to the twilight zone, France, and the Gallic version of political power couple Hillary and Bill Clinton. After last Tuesday, Hillary Clinton's chances of following her husband to the White House are looking rosier. In France, however, her counterpart is only a day away from becoming her party's official nominee for the presidency. And the French Hillary's romantic partner, an unsuccessful candidate for the same post, will be relegated to the sidelines.

Ségolène Royal is favored to win the nod on Thursday, when some 200,000 card-carrying Socialists vote to pick their candidate in next spring's presidential race. The winner will be announced Friday. "Ségo" is the strong favorite among the public, backed in a recent poll by 58 percent of left-leaning voters. For a time, the biggest threat to her candidacy appeared to be the man who shares her bed, Socialist Party leader François Hollande. In this political pairing, unlike the American version, it's the woman who has the charisma and gets to go first, and the man who's the stuffy wonk. But just as in the States, the press can't quite decide whether they're rivals or co-conspirators.

It's unsettling to imagine that the French -- who didn't give women the right to vote until 1944 -- could elect a female president before the United States.

"It's a cultural phenomenon I don't understand," said Steven Weber, a political science professor who heads the Institute of International Studies at the University of California at Berkeley. It contradicts both the French reputation for chauvinism and the American self-image of equality. Perhaps, Weber suggests, "Americans like to tell people they're not sexist or racist, but in the voting booth it's something else."

Steven Ekovich, an associate political science professor at the American University of Paris, believes the path to the presidency may be less bumpy for a French woman than an American woman. "I think it's easier to be feminine and feminist in France than it is in the U.S. Right now being a woman is serving Royal very well. If she turns into a maternal scold, that could be a problem. But she's coming across as sensitive -- and strong."

Ekovich finds the comparisons to Hillary Clinton obvious. "They're both savvy politicians. They both sense the movement of the body politic. The difference is that Ségolène doesn't provoke the same passionate negatives that Hillary does, which may be how Americans deal with a woman -- or which might have more to do with Bill Clinton."

But Royal also resembles Hillary in that she is not universally loved by the most stalwart members of her own party. Like Sen. Clinton, she has a tendency to adopt conservative positions in the hope of attracting centrist crossover voters. A recent drop in popularity within the Socialist ranks has endangered a nomination that once seemed certain, and much of it can be traced to party liberals who resent her Clinton-style triangulation.

Like their American counterparts, the French Hill and Bill met at college, the prestigious École National d'Administration, the specialized school that churns out nearly all the French government's leaders. From the start, according to French journalist Carl Meeus, coauthor of "La madone et le culbuto: Ou L'inlassable ambition de Ségolène Royal et François Hollande" ("The Madonna and the Comeback Guy; or, The Tireless Ambition of Ségolène Royal and Frangois Hollande"), they have decided everything important as a couple, including last summer's decision not to run against each other.

"François is ready to support Ségolène if she's better situated [to win]," wrote Meeus in the book, which was published in April. "If he's convinced she has passed her chance and can no longer mount the challenge, he will tell her and take action. She knows this. She approves of this. She's intelligent enough and has enough confidence in her companion to believe in his intellectual and political integrity."

It was Hollande who encouraged Royal, born in Senegal to a French general, to enter politics. After graduation from the École National d'Administration in 1980, both Royal and Hollande joined the presidential campaign for socialist François Mitterrand (who nurtured a clique of so-called Mitterrand muses, including the nation's first female prime minister, Edith Cresson), and won their first parliamentary seats in 1988. Holland rose to become Socialist Party chief in 1997. Royal is currently president of the Poitou-Charentes region, the only woman in France to head one of the nation's 26 regions. Royal has also headed national ministries of the environment, children, family and the handicapped, occasionally pregnant and sometimes with toddler in tow, which endeared her to the French.

Royal's history has kept her in the public eye, yet outside the political vortex, so she has become known without sacrificing her image as someone fresh from the margins. She has demonstrated competence on the job and championed several uncontroversial causes, like a fight against child pornography. She has stayed above the fray, while as a party leader, Hollande has been in the thick of some bruising fights. He strongly supported last year's unpopular referendum backing a European Union Constitution, which voters rejected resoundingly.

Early this year, as it became clear how popular Royal was, she told the BBC that she would not run against her common-law husband. "I won't stand against François Hollande," she said. "It's unthinkable." Prior to that, however, they had both apparently been thinking about the job while living together. The decision not to compete against each other was made for them. While "Ségo" topped polls among Socialist possibilities early on, Hollande ranked a miserable eighth, and that's probably why he opted not to run.

Royal also told the BBC she would support her party's choice whoever it might be. "I can only be the candidate if the Socialists nominate me -- and if I'm able to win. But it could well be someone else who's in a better position to win." Nevertheless, she added, "I don't see why a man can be ready to be a candidate, and not a woman."

Royal officially entered the race in September. She had already launched a campaign Web platform called Désirs d'Avenir (Desires for the Future), capitalizing on a powerful, modern tool that set her apart from the old guard of the party, exactly what the French seem to like about her. In a recent video on the site she refers to it as part of a "democratic revolution." Her oldest son, Thomas, runs the "Ségosphere," a blog for young supporters.

In the flesh, Royal the candidate is crisply attractive in the same kind of power suits and heels favored by Hillary. Ségolène, also like Hillary, can in turns be sharp, amusing, tolerant, tough and cool under pressure. On the stump, she's mobbed by excited, happy crowds most places she visits.

No one has yet called Royal the French equivalent of the B-word, and her looks have not been attacked as Hillary's were last month. Mrs. Clinton's hapless Senate challenger, John Spencer, questioned how Bill could have married such an "ugly" woman. But feminine beauty is clearly playing an important role in the French campaign. In a radical break with tradition, the French magazine Closer printed several pages of Royal on her August beach vacation with her family. Royal sported a firm six-pack above the top of her turquoise bikini bottoms. "Et dire qu'elle a 53!" -- and to say she's 53! -- gushed the magazine. Closer insists that the French find Ségolène sexier than Monica Bellucci, Pam Anderson and Scarlett Johansson.

The unsexy Hollande stays out of his mate's limelight, and tries, implausibly, to stay neutral in the Socialist campaign for the nomination. He doesn't appear with her at campaign stops. "He's done a good job of being as neutral as he can be," says Steven Ekovich. "They're an unusual couple. They live together ... But he's also the head of the Socialist Party and she's not the party's candidate -- yet."

While the public has embraced Royal, within the party she has met with some resistance. Some of it is simple sexism, despite the progressive politics of French Socialists. When told Royal planned to run, former Socialist Prime Minister Laurent Fabius, who's now a candidate against Royal for the party nod, sniffed, "Who will take care of the children?" And 69-year-old warhorse Lionel Jospin, in tears, decried unnamed usurpers who would "hijack" the Socialist Party.

Other Socialists have more substantive problems with Royal's politics, problems that would be familiar to liberal Democratic critics of Hillary Clinton. Those in France most likely to embrace a female president are the lefties, but many have begun to fear Royal is a conservative in Socialist clothes or a transgendered Tony Blair. She strayed radically from the Socialist line with her recent proposal that first-time youth offenders be placed in military camps and has made threatening noises about the sacrosanct 35-hour French workweek.

It's a Hillary-style run to the right with the general election in mind. "She has to appeal to different voters to win," says Ekovich. "She has to shore up her support on the left but also draw in people from the center-right."

But within the party, her support has begun to erode enough that the outcome of Thursday's vote is not a slam-dunk. She faces Fabius and former finance minister Dominique Strauss-Kahn, and if no one of the three gets more than 50 percent of the vote, there will be a runoff on Nov. 23.

If she does get the nod, she still needs to close the deal with skeptical voters, who may like her style but have doubts about her lack of experience grappling with difficult issues. "For me it doesn't matter if a politician is male or female," says Paris voter Valérie Berjonneau, 42. "Competence is important, and I don't think Ségolène Royal would be competent enough for the post."

Her friend, Valérie Souhonne, will vote for Royal. "I believe in supporting women whenever I can," says Souhonne, 27. Yet Souhonne still fears old-school French chauvinism. "I know the French. She will not win. The French will not take orders from a woman."

Royal could prevail simply out of her air of inevitability, à la Hillary. "I suppose I will vote for her because, well, what are the options?" said a female Socialist voter in Paris who chose not to be named. She puffed out her cheeks in the universally understood French expression of frustration. "She is a woman, yes, but we can't forget she's also a politician."

Mary Papenfuss is a writer and editor in Paris.