In this blissfully entertaining new Bond movie, Daniel Craig gives us 007 as we've never seen him -- more naked, alive and mysterious than ever. 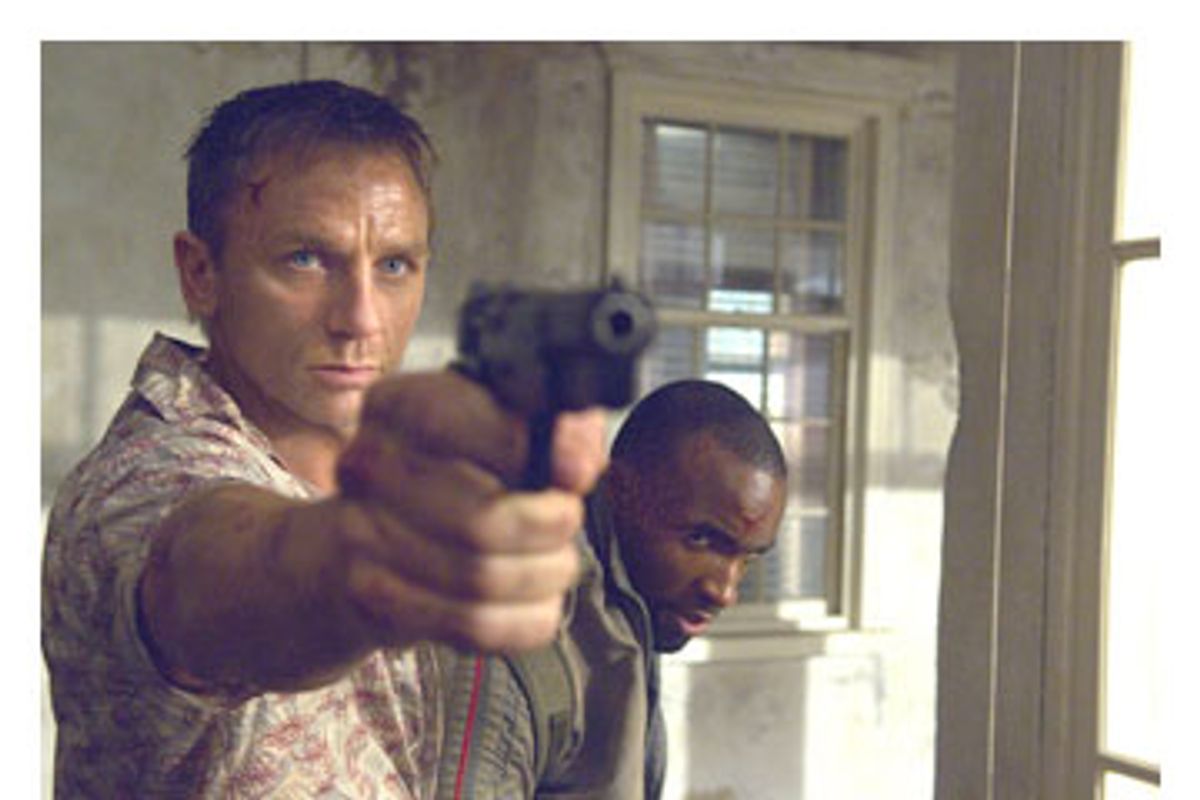 Anyone who has followed the James Bond series even casually over the years knows that there have been serviceable Bonds (Roger Moore), blasé Bonds (George Lazenby) and vaguely unobjectionable Bonds (Pierce Brosnan). But if the greatest Bond is still Sean Connery -- his chipped-ice elegance so clearly defined the franchise that there's no replacing him -- then Daniel Craig is the first Botticelli Bond.

In Martin Campbell's blissfully entertaining "Casino Royale," the 21st picture in the 007 franchise, Craig is Bond reinvented and reborn, a creature so unexpectedly distinctive that even though we all think we know what we want in a Bond, we could never have dreamed this one up. He's not what we think of as the classic Bond type: His body isn't a tuxedo-ready balanced equation but a wedge of muscle that demands clever tailoring. His profile, with its coulda been a contender nose, is so strong and beautiful it wouldn't be out of place on a Greek amphora -- yet his ears, jutting out with boyish awkwardness, look more like the handles. But his charisma both overrides and enhances any physical attributes. Emerging from the sea after a swim with his lady love, he's a scrappy blond god in tiny blue swim shorts; the moment is a clear visual nod to Ursula Andress in "Dr. No," but also an unwitting reference to Venus on the half shell. This is Bond as we've never seen him, more naked, alive and mysterious than ever.

"Casino Royale" is almost everything you want in a Bond movie, as well as everything you didn't know you wanted. Campbell has directed one other Bond picture, the 1995 "GoldenEye." But "Casino Royale," at least in terms of its action sequences, takes more of its cues from Campbell's two terrific Saturday-afternoon swashbucklers, "The Mask of Zorro" and "The Legend of Zorro." Over the past 20 years or so, the Bond movies have become increasingly encumbered by big explosions and noisy effects, at the expense of clever stunts and, often, wit. But Campbell brings to "Casino Royale" a clear love and respect for pure action: There are a few explosions here and there, but the action sequences really dominate. And if this is one of the darkest Bond movies ever made -- we're meeting Bond near the beginning of his career, just after he's been promoted to double-0 status, and he's clearly having trouble putting his thuggish instincts to use in international espionage -- it's also one of the funniest. (This is a Bond picture in which 007 can joke about chocolate, as well as martinis.) The picture's violence is at times brutal, but it always has the appropriate weight: It's neither frivolous nor excessively heavy-spirited.

"Casino Royale" opens with a major cockup on Bond's part: The freshly minted double-0, undercover in Madagascar, goes after, and kills, an ace bomb maker named Mollaka, even though he's been instructed to keep the man alive. (Mollaka is played by Sébastien Foucan, one of the inventors of Parkour, or "free-running," a style of moving at top speeds -- on foot -- that involves bouncing off obstacles and barriers. The chase scene between Mollaka and Bond takes place at a construction site that's conveniently littered with myriad obstacles and barriers, and it's exhilarating to watch. It also features a great deal of rare and refreshing hand-to-hand combat, as opposed to the usual gunplay.)

Bond's supervisor, the imperious mite M (once again played by the marvelously intimidating Judi Dench), greatly displeased with the man she's just promoted, warns him that he'll need to cool his hotheadedness, prefacing her lecture with the words, "This may be too much for a blunt instrument to understand." This Bond is a blunt instrument, a bruiser who's not afraid of getting bruised, so ready to act that he doesn't always think before doing so. And so M cautiously sends him off on his mission, which involves sleek metal suitcases stuffed with money, deadly international terrorists and a creepy, clammy villain, le Chiffre (played by the Danish actor Mads Mikkelsen), who, because of a malfunctioning tear duct, cries tears of blood like a miracle Virgin. He also plays a mean game of Texas Hold 'em.

Much of the out-and-out action in "Casino Royale" -- the sharply paced chases and shootouts -- takes place in the first two-thirds of the picture, which is rarely dull, even for an instant. (The cinematographer, Phil Méheux, shoots the action, and the exotic locales, with brisk clarity.) Even so, the movie clicks into high gear -- and subtly sharpens its focus -- when Bond puts on a tuxedo for the first time. In the early part of "Casino Royale," this greenhorn Bond wears serviceable undercover clothes, comfortable but unremarkable trousers and short-sleeved shirts that stretch -- barely -- over his considerable biceps. But when it comes time to meet his nemesis across the card table at the casino (supposedly located in Montenegro, although this part of the movie was filmed in a spa town in the Czech Republic), the tuxedo he puts on isn't the one he's brought with him: It has been chosen for him by a woman he's just met, Vesper Lynd (Eva Green), a reluctant assistant on his mission. Vesper is the government beauty who's been called in to keep an eye on the money that Bond will be using at the card tables, which, of course, belongs to Bond's employer, the Crown. Vesper has to pose as Bond's girlfriend, a task that displeases her greatly, since she's already been turned off by his arrogance. When he protests that he has his own tuxedo, and then notes that the new one has already been tailored to his exact measurements, Vesper remarks that she sized him up on their first meeting -- in all ways, she's already taken his measure.

Green -- first seen in Bernardo Bertolucci's sorely underrated "The Dreamers" -- and Craig are a glorious pairing; their scenes together have the best kind of romantic-comedy crackle. Vesper -- Bond has a great time teasing her about her name -- is one of the few Bond Girls to have a well-defined character, a template that gives her plenty of shadow and light to work with. (The writers here, Neal Purvis and Robert Wade, working with Paul Haggis, have done right by all the major characters.) Green, with her bisque complexion and midnight hair, is obviously stunning to look at, but she also brings shades of cool gravity and vulnerability to her character that feel wholly natural. She stands up, in 4-inch heels, to this very potent Bond, matching him step-for-step.

That's essential, because this Bond is unlike any other we've seen. The character of James Bond is universally thought of as a sex symbol. But that's different from actually being sexy, and none of the movie Bonds -- not even Connery, as suavely likable as he is -- have really been about sex. They've mostly been about getting it, over and over again. (The franchise's idea of great sex has more to do with quantity than with quality.)

But Craig changes all that. He's the first truly erotic James Bond, a creature whose impulses and desires are alternately predictable and unreadable. This has very little to do with Craig's buffed-up build (those miniature swim trunks notwithstanding) and nearly everything to do with his face: His smile is wary, as if it had been repurposed from a scowl; his wildflower-blue eyes betray nothing and tell us everything. Craig, an actor who has been superb in a broad range of roles, in pictures as disparate as "The Mother," "Munich" and "Sylvia," here plays a stereotype, the iconic masculine hero with hidden vulnerabilities. But he's a stereotype with wings: There's no holding him down or boxing him in.

All Bond movies have some sort of cartoonish lovemaking in them. But actual love scenes are harder to come by in Bond movies, and "Casino Royale" -- which in some ways resembles another wonderful Bond picture, one with unusual emotional depth, the 1969 "On Her Majesty's Secret Service" -- features a great one. To describe it is to spoil it, but I will say that it's a clever and lovely antidote to the ubiquitous dumb, uncomfortable-looking shower-sex scene. Bond and Vesper are fully clothed in this sequence; the erotic charge between them is subtle but intense. The delicacy of this brief moment between them is just one of the things that sets "Casino Royale" apart from all other action movies, and even apart from many of the previous Bond movies. This, at last, is Bond stripped bare.