Memo to O.J.: Kill yourself

But meanwhile, let's hear it for the white girl who got him to confess. 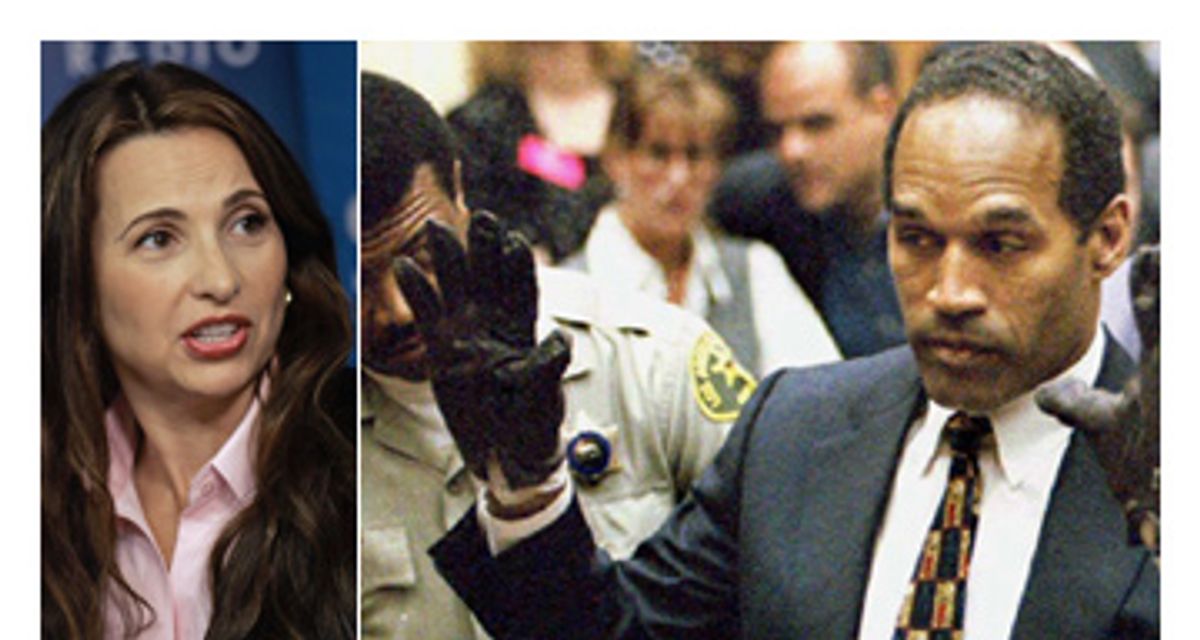 When I first heard of the O.J. saga, it was only the tiny rectangle of news I could make out on my corner news box as I walked to work. I lived in San Francisco in 1994, and I saw the headline about O.J.'s pathetic slow-speed Bronco chase as I dodged North Beach's swarms of fanny-packed tourists and the aggressive, mentally altered panhandlers who screeched in their far-too-generous wake. As a summer associate at a law firm, I spent most of my time hiding from partners bearing last-minute work so that I could party away the weekends with the other overpaid summer associates, as was our divine right. So after that news box glimpse I tried to ignore all things O.J., and the firestorm of attention about him has always been a mystery to me. Squatting and squinting on that North Beach corner, the genius law student solved the case: entitled, famous, paid-to-be-violent bully kills the centerfold ex-wife his power bought for him and the Good Samaritan unlucky enough to be standing there when the testosterone, steroids and male privilege finally hit the fan. What's with all the tsuris?

A decade and a never-ending national nightmare later, I'm still wondering. Disgusted and dismayed from the start, I may well have been the only sentient American to avoid all contact with the seamy, ongoing spectacle. I failed to block it out, however; its presence was as impossible to avoid as secondhand smoke. But I tried. And back then, whenever I was forced to talk about it, all I ever said to all who would listen, was: He should have killed himself in that Bronco on the 405.

As most people were happily immersed in the forensic gore and tawdry details of the case, I never offered that gruesome tidbit of wisdom to anyone who wasn't shocked into speechlessness. But 12 years later I remain steadfast. As Stephen Colbert would say, the facts may change but my opinion never will. Better late than never. O.J. -- take a powder. Like anthrax. Spare your kids, spare the victims' families, spare the planet, and embrace the only remaining act of decency left to a human hemorrhoid like you. Leave. Given the living hell that must be your life -- and though this is a minor, minor benny -- spare yourself the agony of facing that monster in the mirror every day. For once, be a man. Drive into a tree. OD on the suitcase full of psych meds you must be taking. Slit your bloodstained wrists. Drink hemlock. Gouge your eyes out with your Heisman or choke down a "Naked Gun" DVD. Just do the species a favor and go claim that seat Udai and Qusay are saving for you.

How did a no-brainer "husband kills wife, innocent bystander" murder become a Rorschach for all of America's unresolved quandaries of race, gender, socioeconomic status, celebrity and, most of all, justice? Whites blamed blacks for being either too stupid or too primitively tribal to deserve (or understand) jury duty, blacks were so determined to get even with whitey that they demanded and celebrated the acquittal of a vicious double murderer, and the police were so used to framing even the guilty that they don't even bother to do it well anymore. Like the painful clarity that comes the morning after a bad, bad night of drinking, one would imagine that America would have long since been too ashamed of its revealing O.J. behavior to have an appetite for more. And yet here we are, and it comes rushing back.

How much better off we would all be, how precious that tiny shred of blessed ignorance about how far we haven't come might seem, had you, O.J., only been moldering in Forest Lawn these past dozen years. But you're alive, because you're a wuss -- a "remnant," as a girlfriend of mine scornfully calls the limping, deficient crop of men available to us as single mothers of a certain age. Like a herpes outbreak, here you are to plague us again. Since you won't die, who will finally, if only a tad, cleanse us all of the poison of injustice that infects us?

Perhaps a woman, an abuse victim, a medium who channels the battered everywhere, a virago in the original and true sense of the word. Judith Regan had to do what you and an army of lawyers, cops and filthy minded citizen-voyeurs couldn't.

Like most observers, I assumed that Regan, publisher of O.J.'s upcoming quasi-confession "If I Did It" and interviewer of Mr. Simpson on Fox for two separate hours on Nov. 27 and 29, was a bottom-feeding huckster willing to do anything for a dime. Or, I assumed that she was merely a bottom-feeder. But as I sat down to write this, I came to believe that, whatever her motivation, on some level she had to be focused on wringing a confession from the bastard, the only kind such a coward is capable of: a pitifully hypothetical one. Turns out, I was right in spades. I just hadn't known it was personal.

In Friday's New York Post, Regan comes out spitting and clawing and, frankly, breaking my heart. The pain and fury she suffered as an abused and unavenged wife sizzles on the page. In a self-penned article titled "Why I Did It," she writes, "I wanted the confession for my own selfish reasons and for the symbolism of that act." She says that her charming, accomplished, handsome first husband knocked her out and put her in the hospital. "I had once been that young woman ... who believed in the beauty of romance, the power of love ... Like Nicole Brown, I believed with all my heart ... and then got punched in the face." Ever since O.J.'s acquittal, which she predicted and which she watched, weirdly, in the company of Howard Stern, Regan says she has wanted some form of "conviction." "And if Marcia Clark couldn't do it, I sure wanted to try."

If it turns out Regan made any of this up, I may go O.J. on her myself and skip the suicide watch. But absent any proof to the contrary, and given the widespread and sadly unreported abuse of women generally, I believe her, as I never believed O.J. or trusted the proffered explanations of the bloodthirsty crowds calling for either his acquittal or his head. After a dozen years of abstinence, I will definitely be watching on TV next week as O.J. squirms and suffers and cowers before every woman ever pummeled anywhere by a sorry-assed man.

Turns out, it takes a white woman to clean up a racial mess she didn't make and drag us to where we should have been all along -- demanding justice. Nothing less, nothing more, nothing else. If Judith Regan is half the woman this coup hints at, by Christmas we may all be dancing on O.J.'s grave.