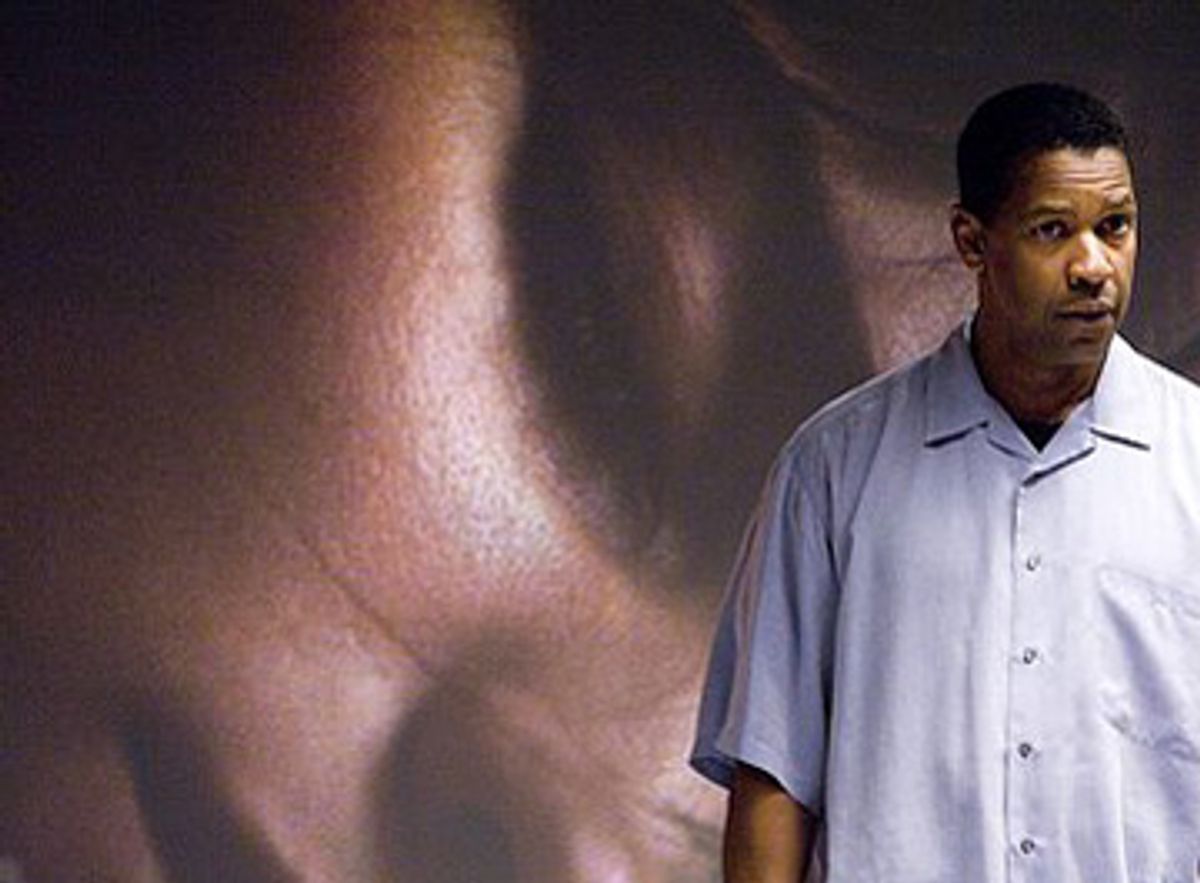 Tony Scott's "Déjà Vu," part love story, part load of time-and-space-bending horse pucky, ranks among the director's more restrained pictures: There are relatively few noisy explosions, and the crazy patchwork cutting Scott is generally so fond of has been scaled back at least a smidge. But when it comes to making sense of the plot, your garden-variety suspension of disbelief -- that handy, portable Snap-On tool that allows us to hang in there and enjoy an implausible fictional work -- isn't going to do the trick. To believe "Déjà Vu," or even to pretend you can actually follow it, you'll need heavy-duty gear -- harness belt, spelunking helmet, a great deal of rope, PowerBars for sustenance. A little coffee wouldn't hurt, either.

While investigating a deadly bomb explosion aboard a New Orleans ferry, ATF agent Doug Carlin (Denzel Washington) is called in to have a look at the body of a beautiful woman whose murder may or may not have something to do with the ferry disaster. That woman's name is Claire -- she's played by Paula Patton, who appeared earlier this year in OutKast's ambitious and wonderful "Idlewild" -- and as Carlin pieces together bits of the puzzle of her death, and of the ferry bombing, he finds himself falling in love with her.

Thanks to a bunch of government techno-nerds, led by Dr. Alexander Denny (played with keystroke-precise deadpan wit by Adam Goldberg, who, with his wild-man beard and distinctively rumpled clothing, looks like an MIT-educated Serpico), Carlin is able to follow the last days of Claire's life on a kind of supernatural surveillance video. But that's just the beginning: "Déjà Vu" gets wilder, and much harder to follow, from there. The script, by Bill Marsilii and Terry Rossio, is one of those self-consciously convoluted things that's supposedly packed with surprises -- although when virtually nothing makes sense in a movie, anything can be surprising. Bruce Greenwood and Val Kilmer appear in now you see 'em, now you don't roles; Jim "Jesus" Caviezel appears in a slightly bigger one, which means we get all too much of his bland scowling.

All that said, "Déjà Vu" is at least content to be an entertainment. It doesn't have the sadistic sheen of Scott's loathsome revenge drama "Man on Fire." (Then again, it doesn't have the enjoyably cathartic, blammo-brazenness of last year's "Domino," either.) And whatever the movie's flaws are, it does have Washington's star wattage behind it. "Déjà Vu" doesn't make the most of Washington's gifts as an actor; he could carry the picture's dramatic weight, such as it is, in his sleep, and he seems to be able to turn his relaxed, easy charm on and off like a faucet. Still, it's some faucet, and Washington is so casually, inherently likable that he makes wending through the movie's multiple implausibilities easier to bear. His Doug Carlin is a noble character who risks his own life to set things right. Chivalry isn't dead in "Déjà Vu." But it sure could be a lot livelier.