While the GOP was exploiting the bigotry of the black clergy in the midterms, black piety was melting before America's eyes. 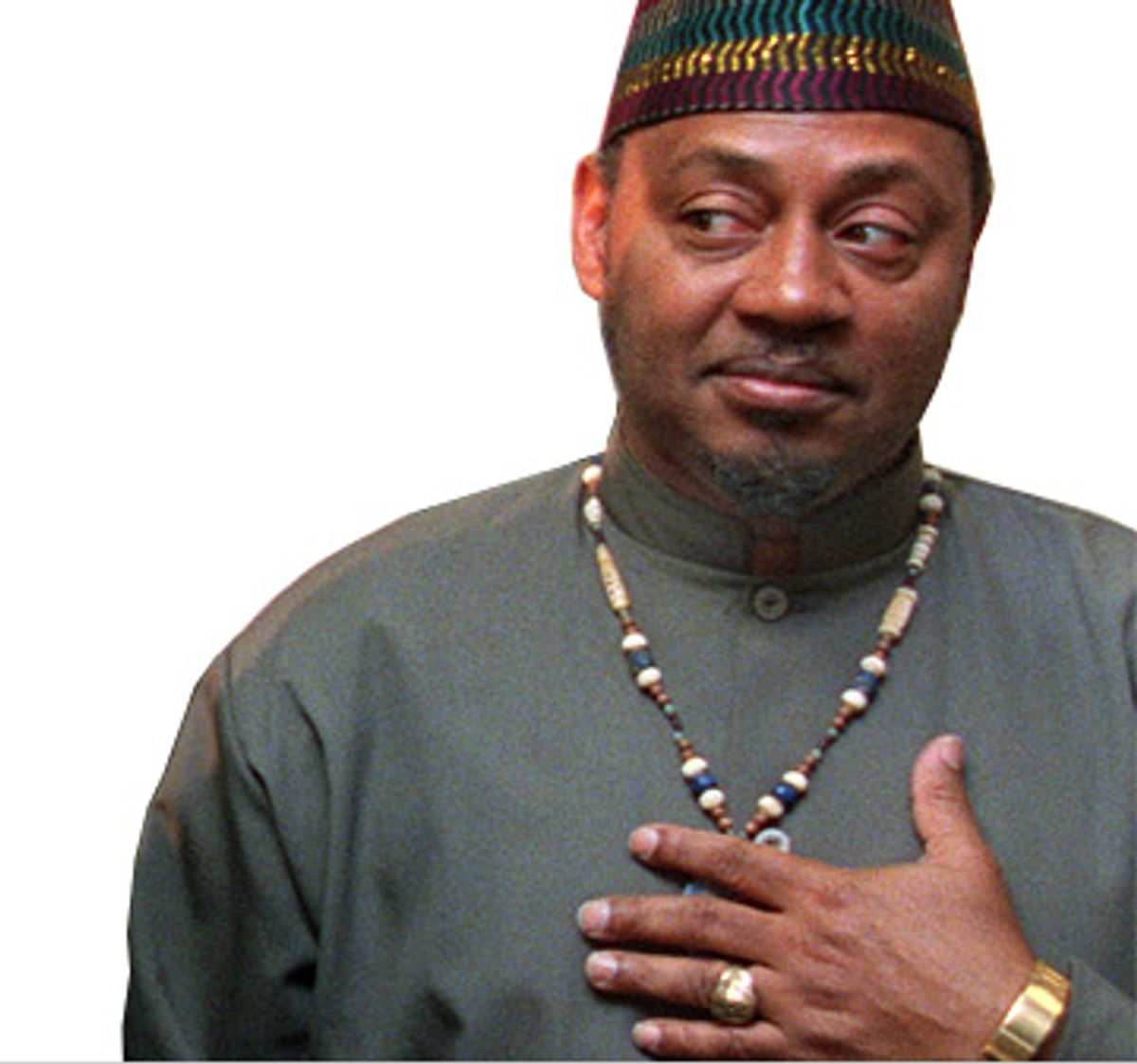 Since we'll all no doubt be parsing the meaning of the 2006 midterms till kingdom come, it's time to tackle the area of discussion most likely to lead us all to hell and damnation: religion. Black religion, specifically. Is it just me, or did we learn an awful lot of things we'd all much rather we not have about the black view of religion and its role in society in the last election cycle? Raised a Southern Baptist in a home so pious that I could play neither cards (tools of the devil) nor games with dice in them (see: Monopoly), I thought I knew a thing or two about fire, brimstone and all the many reasons I'd be looking for asbestos panties when the bacon fat and Marlboro Lights finally call me home, but even I was taken aback by the bitch-slapping that the black clergy gave America, courtesy of a determined GOP.

I was even more surprised by how cowed America remained when doused in bigotry and anti-intellectualism by the group known worldwide as "the conscience of America." Since it's unlikely that a beast as well-fed as the black religious right has lately been is going to quietly go back on the calorie-restricted diet of irrelevance it has long subsisted on, how long will it be, I wonder, before America, guilty as it still rightfully is over its racism, finds its backbone and calls bullshit on the brothers.

In a very religious nation, blacks are the most religious of all. Nationally, 83 percent describe themselves as Christian. Accordingly, 67 percent believe in an afterlife in either heaven or hell. Surveys show that only 3 percent of blacks report having no religion but instead are the Americans most likely to participate in religious activities like prayer, Bible reading and worship attendance. They are most likely to strongly agree that the Bible is totally accurate and to strongly disagree that Jesus sinned while on earth.

Their church services are even 70 percent longer than whites', and blacks are among the most generous givers to religious organizations; while nationally three out of every four dollars donated go to religious institutions, the figure is nine out of 10 for African-Americans. The black tradition of tithing (a biblical requirement to give a set percentage -- usually 10 -- to the church) is strong enough to have propelled affluent, majority-black Prince George's County in Maryland into the top five counties in the nation for charitable donations.

Without a doubt, then, blacks are America's most religious group. On any given Sunday, blacks all over America fill church pews to have their hearts and minds filled with ... what? If you guessed turning the other cheek and offering paeans to tolerance, you'd be in for a shock.

As the gospel soundtrack accompanying any civil rights movie or documentary quickly reveals, blacks have long been seen as dignified and exalted by their suffering, a position they could occupy as long as they were only marginally politically relevant. But five minutes into the GOP's renunciation of the Southern Strategy and up to their ashy elbows in attention, validation of their prejudices, and faith-based-initiative millions, blacks turn out to be no more high-minded than any other group that's bellied up to the special-interest trough and -- to mix a metaphor -- no less quick to throw others out of the lifeboat. It was particularly fitting, then, that I happened to watch Alfred Hitchcock's 1944 "Lifeboat" this weekend.

In it, the Germans sink an ocean liner, and we join the survivors in their quest to survive the sea and each other. There's the doomed, shell-shocked Blitz refugee, complete with doomed baby, the captain of the U-boat that sank them, a dedicated but lovelorn Army nurse, a multimillionaire industrialist, a glamorous Margaret Bourke-White knock-off, and three merchant mariners. And, of course, George ("Call me Joe") Spencer, the black ex-pickpocket so reformed now that he's all but wearing Gandhi's spare toga.

Knowing himself outside (and therefore above) decision making, he abstains from the fray on what to do with the German. "So I gets to vote now?" he observes without bile but only, always, with pity, as the whites make a perfunctory effort to pretend that his input matters. Delicately, seemingly out of respect for him but really out of respect for themselves, no one pursues the matter of his preferences further, and he remains largely out of frame. Until, of course, either music or Grace is required. Only Joe can manage the words, transported by piety and bathed in holy light, to the Lord's Prayer for a burial at sea. At the movie's climax, when the castaways startlingly beat and drown the nefarious Nazi, Joe turns his back on the horror of it all; only he refuses to join the mob.

There could hardly be a better metaphor than "Lifeboat" for blacks' role in politics as it existed until recently. But with the GOP's newly launched effort to win the black vote, the pastoral view of both the piety and humanity of blacks (more Protestant than the Puritans and ennobled by oppression) may well, if the religious left keeps twiddling its thumbs, dissolve before America's eyes and take the electorate in directions no one ever contemplated. At a minimum, the understanding of blacks as victims either exalted or emasculated by their suffering will be ... let's just say, modified.

The core understanding of blacks as easily disregarded guilt symbols who sing and pray while the white folks run most things has expanded little since the pre-movement days, mostly because the GOP officially scorned their vote. The only change of note in the story line was the spotlight that the GOP threw on non-GOP blacks' racism. Al Sharpton, Jesse Jackson of "Hymietown" fame and the racist lunacies of the Nation of Islam have been such reliable right-wing boogeymen that Clinton couldn't get elected president until he had his Sister Souljah moment. And what a masterful twofer that was: by disowning Sister Souljah at a Jesse Jackson event, Clinton sent the world's most unsubtle message to whites not to mistake his fondness for fried foods, round rumps and saxophones to mean he didn't know how to keep those people in line.

Now that political shoe is about to be on the other foot, because the GOP's black outreach was aimed directly at a black bigotry. First stop: homophobia. It's simply inarguable that the white right reached out to religious blacks via that most polarizing strand of their psyche and, in so doing, cynically elevated the unworthy and the untested to national prominence -- black ministers like the Rev. Dwight McKissic of Cornerstone Baptist Church in Texas. At 2006's high-profile right-wing Values Voter Summit, McKissic attacked as "insulting, offensive, demeaning, and racist" any consonance between gay rights and civil rights. A well-known and vicious opponent of gay rights, he derided gays as "comparing their sin to my skin" and scoffed that they "can't reproduce so they have to recruit." While the civil rights movement sprang from holiness and righteousness, the gay rights movement springs from "the pit of hell itself" and is a "satanic anointment," birthed as it was from the anti-Christ who himself is, of course, gay.

The only wonder is that it took the GOP so long to mine this rich conservative vein when even liberal black ministers like the civil rights activist Rev. Willie Wilson of Union Temple Baptist Church in southeast D.C. channel Jesus thusly:

"'Lesbianism is about to take over our community ... I ain't homophobic, because everybody here got something wrong with him,' he said. 'But ... women falling down on another woman, strapping yourself up with something, it ain't real. That thing ain't got no feeling in it. It ain't natural. Anytime somebody got to slap some grease on your behind and stick something in you, it's something wrong with that. Your butt ain't made for that.

"'No wonder your behind is bleeding,' he said. 'You can't make no connection with a screw and another screw. The Bible says God made them male and female.'

"The congregation can be heard shouting its approval in the background during Wilson's sermon."

No wonder, then, given his parishioners shouted approval, that Wilson could only bring himself to call his remarks "intemperate" when the backlash began. Indeed, it turns out that rank-and-file blacks may exhibit a political complexity and potential for growth that their leaders don't: While two-thirds of blacks oppose, and voted against, same-sex unions, they also believe that the Democrats will handle the issue better than the GOP. And they voted accordingly: The black percentage of the Democratic vote remains virtually unchanged. Fifty-six percent of conservative Virginia's blacks voted to ban same-sex marriage, but only 15 percent went on to vote for Republican George Allen.

Black ministers like McKissic and Wilson may truly believe that homosexuality is blacks' most pressing problem, but there is reason to believe that not all those amens were sincere. Now that blacks are wiggling free from the echo chamber of irrelevance that kept them from hearing what their thoughts sound like to others, they may come to wish they could go back to rocking hymns while the real citizens got to make all the decisions. It's much easier being a plaster saint than a simple voter trying to hold on to his morality and humanity in a winner-take-all system. The humbling that blacks are about to undergo, as they engage in the same bruising consciousness-raising that whites have had to, will likely do wonders for the soul.