This intimate, actor-centric movie's bare-boned simplicity is its greatest strength. 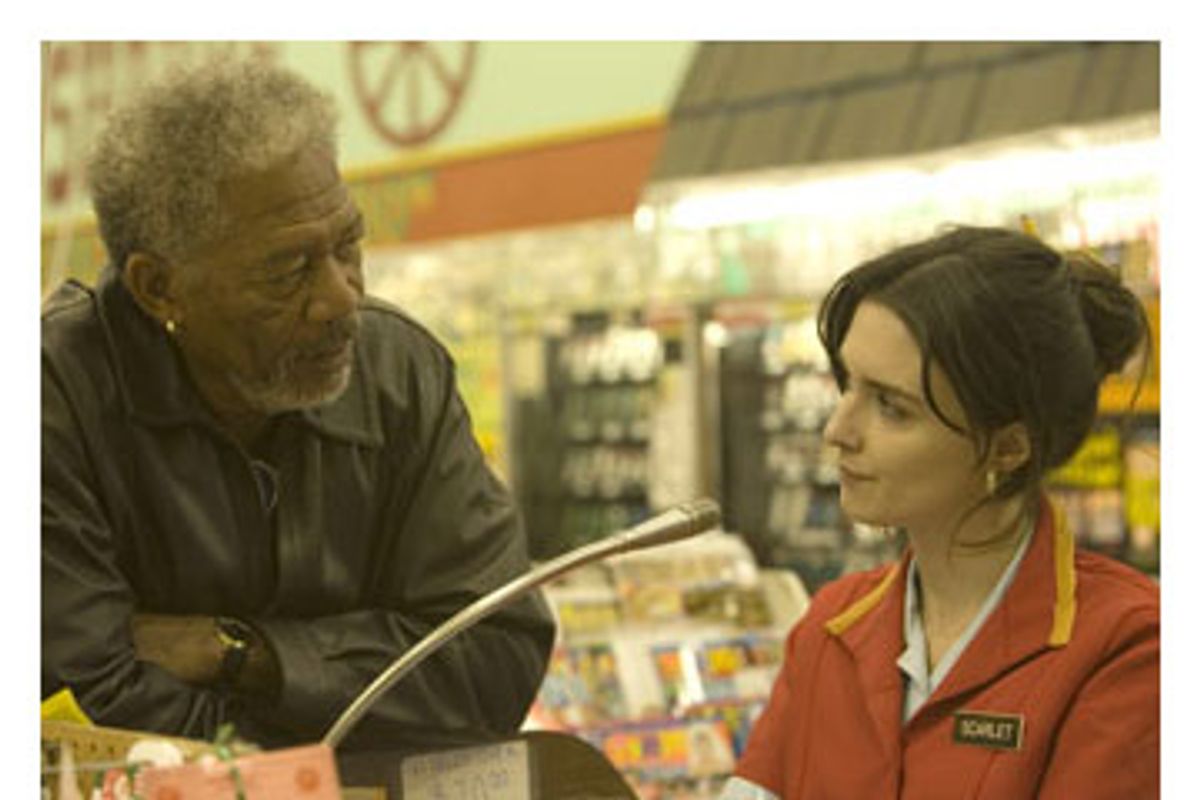 Brad Silberling's "10 Items or Less" is less a full-fledged movie than an extended sketch, a chance for two actors -- Morgan Freeman and Paz Vega -- to stretch out and loosen up. But the bare-boned simplicity of "10 Items or Less" is more a strength than a liability. Even in the most elaborate overplotted and overworked movies, sometimes we get the greatest joy from simply watching two actors riff, jostling and glancing off each other's lines like restless molecules trying to make order out of chaos. That's what Freeman and Vega do here, and their rapport makes the picture around them feel pleasingly casual. Particularly as the big holiday movies draw nearer, their marketing strategies ringing louder than Godzilla's footsteps, it's nice to see a bit of intimate, offhanded moviemaking that focuses on actors, as opposed to stars.

Freeman plays a character known only as "Him," a successful actor who has been getting fewer and fewer roles over the years, and who's also finding it harder to commit to the roles that do come his way: The Hollywood runaround has exhausted him, and we also get the sense that his withdrawal from the system insulates him from failure.

But he doesn't want to be a has-been, either, and now he's reluctantly considering a role in a small indie movie: that of a night manager in a sleepy, rundown supermarket. To research the role, he drops into a tired old grocery store in Carson (a Los Angeles suburb that's worlds apart from his Brentwood home), a joint so desolate that it would take a major force of will -- or the deepest desperation -- to shop there. The guy working the meat counter is fast asleep; two children play indifferently in the aisles, as if they couldn't be bothered to find a more cheerful setting; and one of the cashiers (played by young actress Anne Dudek) has her foot propped up near her cash register, the better to paint her toenails.

The employees and the store's few customers eye the actor with mild curiosity, partly because they know he's famous (even if they can't quite place him) and partly because he's the only black guy around (they're all Latino). But mostly, they ignore him, leaving him to explore the ghostly aisles on his own. And eventually he notices that the store's other cashier -- the one who's not engaged in toenail painting -- is doing all the work. A harried but efficient worker bee with the name Scarlet emblazoned on her smock, she works the line that has been designated for customers with 10 items or less, and she taps the keys of her old-fashioned adding machine with authoritative precision. In this store of somnambulists, she's the only one awake, and she's a stickler for detail: If a customer should come through her line with 11 items, she whisks the offensive surplus away, to be returned to the meager shelves.

The actor is fascinated by this vision of efficiency and determination, and he strikes up a conversation with her. Impatient and exasperated by his probing questions -- he may be a movie star, but he's a naif in the real world she's forced to live in -- she tries to ignore him. But his helplessness and his eager friendliness wear her down, and the two sidle into an uneasy friendship that, even though it may last for just a day, subtly changes the shape and texture of their lives.

"10 Items or Less" is a road movie of sorts, even though its road is pretty much limited to Los Angeles. (Then again, like all major American cities, Los Angeles is many worlds in one.) Silberling, whose last picture was the stylish but disappointing "Lemony Snicket's A Series of Unfortunate Events," is simply having fun here, and the movie's informality draws out some of his best qualities as a director. He and his actors pull off some breezy little fillips that might not fit into a more studied, structured picture: When the actor and Scarlet pull into a car wash (she's on her way to a job interview that could change her life, and, urging her to treat the interview like an audition, the actor dissuades her from arriving in a dirty old car), he charms the attendants, in a wordless montage, into polishing extra sparkle into her old Gremlin. They're all momentarily distracted by a communal TV, on which "The Yearling" is playing. As the young Claude Jarman Jr. hugs his pet fawn, Silberling's camera pulls back to reveal the actor and his new friends, all of them tough-looking Latino guys, clutching their hearts and dabbing at their eyes.

Freeman and Vega have a sweet, relaxed rapport here. Vega's performance is charged with spiky vitality, and she shows us how Scarlet's façade of cultivated toughness masks her own fears. And watching Freeman, in this unstudied but deeply felt performance, is simply bliss. He gets some wonderful sight gags (as when he follows an ancient, shuffling store employee from aisle to aisle, mimicking the man's every shaky move). And while wandering through the store, he comes across a video of one of his old movies. (It's called "Double Down," and in a sly nod to the way art imitates art, its cover features stylized likenesses of Morgan Freeman and Ashley Judd.) There's a bright orange sticker proclaiming "Marked Down!" affixed to the box, which the actor surreptitiously attempts to peel off. It's a small gesture that speaks volumes not just about the size of the typical actor's ego, but about the necessity of having an ego in the first place. No one wants to be left on the shelf.