The madness of George

The president's likely refusal to pursue the diplomatic solutions recommended by the Iraq Study Group is simply senseless. 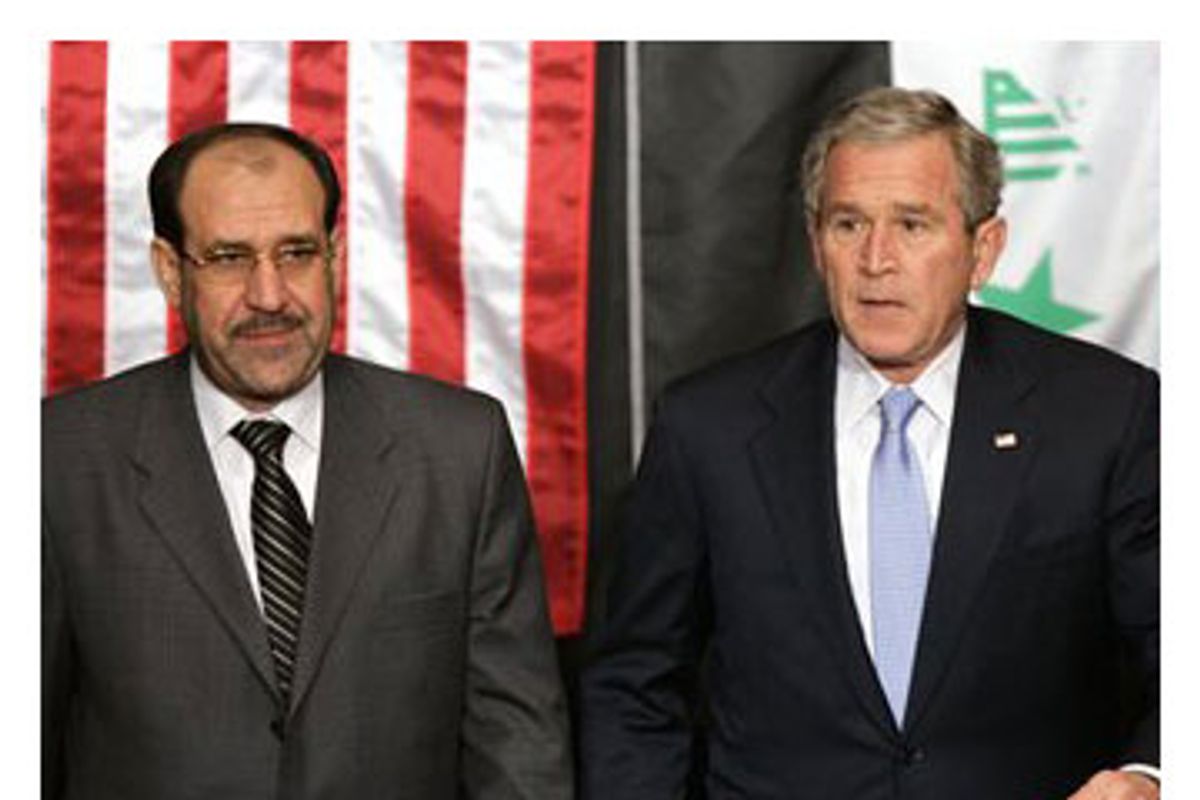 If war is diplomacy by other means, then perhaps diplomacy is the way to conclude an unsuccessful war. Yet the Bush White House -- which seems poised to reject the anticipated recommendations of the Iraq Study Group chaired by James Baker III and Lee Hamilton -- evidently prefers the endless continuation of a ruinous military conflict to any conceivable resolution that requires negotiation and compromise. The ideological aversion to the normal processes of international relations was a principal cause of the debacle in Iraq, and that same aversion may now preclude any alternative to the ongoing carnage.

To describe this behavior as irrational is to be excessively polite.

According to every leak and rumor, the Iraq Study Group is expected to urge President Bush to directly "engage" with Syria and Iran as part of a broader strategy to curtail the chaotic communal violence that is slaughtering so many Iraqis every day. Although the president has not denounced that idea publicly, he and Vice President Cheney are widely expected to ignore any such advice. Sitting down with hostile regimes to settle differences is not consistent with their philosophy of power, in which America speaks and others listen.

The craziness of this neoconservative arrogance may be obvious, but it is emphasized by the context of the Iraqi crisis. Meeting with Nouri al-Maliki in Jordan this week, Bush declared his full and unconditional support for the Iraqi prime minister's government. The president not only endorsed Maliki as "the right guy" to run Iraq but also promised to keep sending money and troops to prop him up until he can stand on his own, whenever that might be.

At the same time, however, our man Maliki is desperately seeking the assistance of the Syrians and the Iranians as his government struggles to survive. Just a week ago, Iraqi Foreign Minister Hoshyar Zebari welcomed his Syrian counterpart, Walid Muallem, to Baghdad, where they announced the resumption of diplomatic ties that were severed during the Iran-Iraq war in 1982. Statements issued by both governments proclaimed their determination to work together to assure "stability and security" in the region.

Meanwhile, Iraqi President Jalal Talabani was preparing for his own visit this week to Tehran, where he arrived as a supplicant to Iranian President Mahmoud Ahmadinejad -- and will leave with a billion-dollar line of credit to rebuild his country. That may not compare with the billions lavished on Halliburton, but it is curious indeed that a regime the Bush administration wants to destabilize will soon be engaged in no-bid contracting in Iraq (where the Iranians will presumably work alongside American contractors and soldiers). Talabani, a venerable Kurdish leader and longtime friend of the United States, declared that he and Ahmadinejad had achieved "complete agreement" during three days of talks about security and aid.

So the Iraqi government, which is financed by American money and protected with American lives, can deal with the Syrians and the Iranians at the highest levels. But our own government cannot or will not. That is simply senseless.

At the outset of the Iraqi misadventure, many of its most enthusiastic proponents believed that the overthrow of Saddam Hussein marked only the beginning of a regional conflagration that would eventually overturn the regimes in Iran and Syria as well. Those bloody fantasies have disappeared into the quicksand, for now at least, along with neoconservative illusions of instant democracy and cheaper oil. But White House policy toward Damascus and Tehran still reflects those unrealistic schemes.

What would be gained by talking with Syria and Iran? Perhaps nothing except changing the world's perception of the United States from blundering bully to responsible and realistic superpower. But it is also possible that the Iranians and the Syrians could be induced to live up to their recent commitments to the Iraqis, in which they agreed to help curtail terrorism and violence. If the Syrians have been allowing insurgents to bring weapons across the border into Iraq, as no doubt they have, then their cooperation would be vital. If the Iranians have been encouraging the Shiite militias to attack Sunni communities in Iraq, as they probably have done, then their cooperation would be essential.

But to consider talking with Iran and Syria is to admit that only broad negotiations, rather than further bloodshed, will furnish any hope for Iraq's future. The president's refusal to acknowledge that reality -- even as his friends in Baghdad pursue diplomatic solutions -- is worse than irrational. It is madness.