Ecclesiastical tastemakers are buzzing about this respectfully drab depiction of the birth of Jesus. 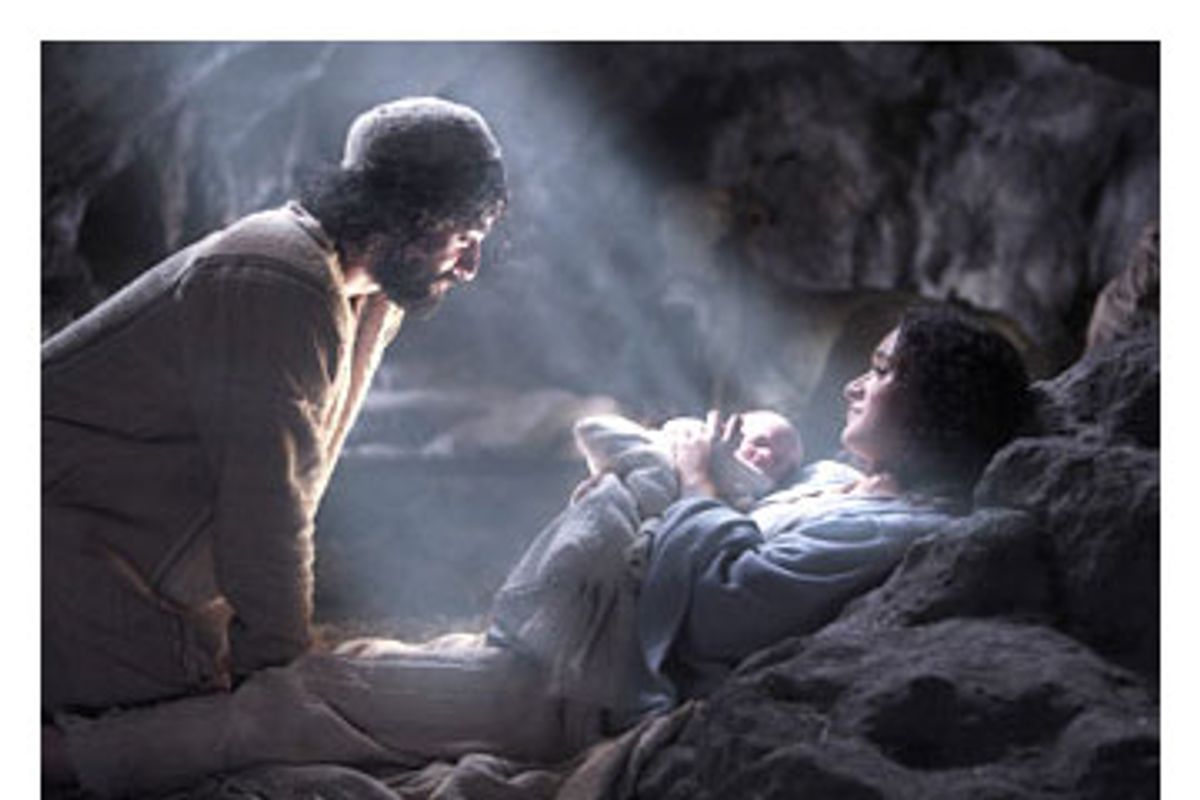 I wish John Lennon were alive to have seen the line snaking around a Times Square block to get into an evening promo screening, sponsored by a New York radio station, of "The Nativity Story" earlier this week. He'd have realized that even Jesus is bigger than Jesus.

With the kind of name recognition and built-in pre-awareness money can't buy, Jesus is likely to pack 'em into theaters this Christmas. Ecclesiastical tastemakers around the world are already buzzing about "The Nativity Story": "Best Jesus Movie Since 1890s" shouts a headline in the London-based Web publication Christian Today (because, face it -- not even Jesus could compete with Theda Bara). And the movie premiered at the Vatican last Sunday.

And yet for a potential blockbuster, "The Nativity Story" is surprisingly restrained. The director is Catherine Hardwicke, who gave us both the teenage-red-alert thesis movie "Thirteen" and the madly entertaining "Lords of Dogtown"; the star is Keisha Castle-Hughes, the lovely young actress who starred in the 2002 New Zealand film "Whale Rider." And although the movie has a dull, instructional tone, it is, at least, appropriately humble, a world apart from Mel Gibson's grisly macho exercise "The Passion of the Christ." "The Nativity Story" may be colorless, but at least it's never arrogantly assaultive.

Hardwicke, working from a script by Mike Rich, delivers exactly what the title promises, chronicling events before and immediately after the birth of Jesus. Castle-Hughes plays Mary, the woman who would conceive (immaculately) and give birth to the future savior of the Christian world; her husband, Joseph, the regular Joe who's dismayed to discover that his wife is pregnant even though he hasn't touched her, is played by relative newcomer Oscar Isaac. Even when they're saddled with impossibly stiff biblical-style dialogue, the two manage to pull off a kind of casual teenage sweetness. Isaac plays Joseph with believable shrugging shyness, and Castle-Hughes does the best any actress could with one of the most thankless roles known to womankind: This Mary may be suitably virginal, but Castle-Hughes avoids turning her into a symbol of sappy purity. When she and Joseph, on their long trek to Bethlehem, confess to each other that they're afraid of what the future holds for them, the moment is played as a vignette of normal expectant-parent anxiety. It brings these characters, so often portrayed as larger than life, down to human scale.

Hardwicke has assembled some interesting actors here: Ciaran Hinds, with a mass of heavily gelled curls and a sinister pointed beard, makes a cartoonishly nasty Herod. And the marvelously grave Shohreh Aghdashloo is Elizabeth, Mary's cousin and the mother of John the Baptist -- although even in this no-frills, no-makeup role, Aghdashloo's sexual allure is undiminished. It's probably a mortal sin to think of Elizabeth as "hot," but Aghdashloo's charisma makes that unavoidable.

These are all respectful, respectable performances, and they keep "The Nativity Story" from slipping into complete torpor. But face it: This is inherently drab material for a filmmaker. There's no way to approach it except with reverence, and reverence doesn't make for lively art. Shot in a palette of gray-greens and stony blues (the cinematographer is Elliot Davis), and filmed partially in the same Italian town where Gibson filmed "The Passion of the Christ," the picture has a somber, homespun look. The characters' nubbly tunics and sturdy leather sandals (not to mention the guys' first-edition "Joy of Sex" facial hair) are probably painstakingly authentic, but they also raise specters of People's Park. Hardwicke has clearly taken a great deal of care with "The Nativity Story," but the finished movie is somewhat lusterless, like a restaurant meal that's good for you without necessarily being good.

But I have to hand it to Hardwicke: I was a lot less bored by "The Nativity Story" than I feared I'd be. The three wise men, a bickering, grousing trio played by Nadim Sawalha, Eriq Ebouaney and Stefan Kalipha, give the movie a shot of intentional comic relief whenever they appear. And with their flowing robes and roll-brim hats festooned with gilt upholstery trim, they add a dash of glamour, too. The movie's four-legged cast includes one very personable donkey (her name, as listed in the credits, is Gilda) and an array of prettily groomed livestock, who gaze upon the gleaming infant with appropriate levels of placid adoration.

And it probably didn't hurt that the racially mixed audience I saw the movie with treated its two childbirth sequences like joyous audience-participation events. They cheered when John the Baptist was pulled, slimy and squirming, from Elizabeth's womb. And, predictably, the emergence of Baby J. really brought the house down. "The Nativity Story" may be more bland than bling, but its hero is still Jesus Christ, Superstar.