"Casanova's Women" shows that the world-famous rake spread joy -- even empowerment -- among his 116 lovers, not to mention V.D., pregnancy and social disgrace. 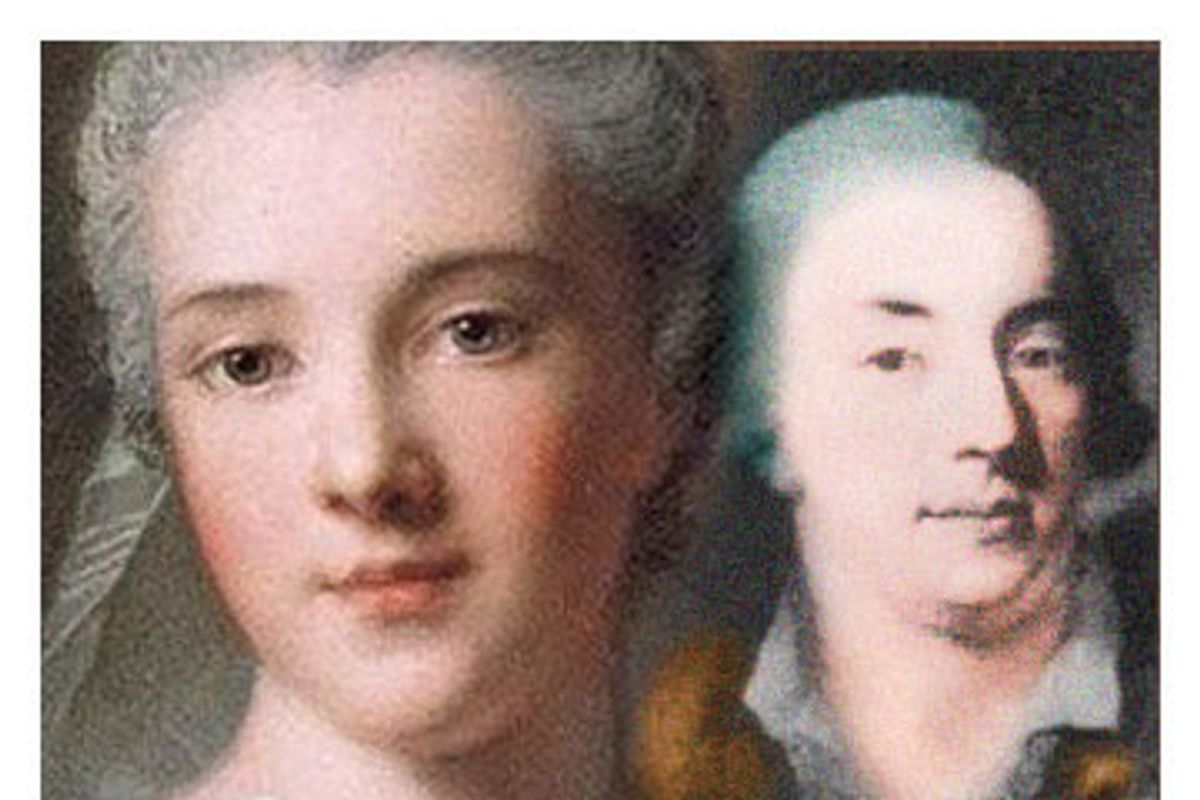 What, then, was his secret? Was it a silver tongue that no woman could resist? Was it his outlaw reputation and his celebrated good looks? His ability to let frustrated women express their sexuality in an oppressive society? Or was he just really well hung?

Actually, Casanova's profligacy seemed to have a lot to do with furniture, or rather a lack thereof in 18th century Europe. Time and again, the great seducer's campaign to lift every skirt between Barcelona and Bucharest was facilitated by the fact that there simply were not enough beds to go around. Take, for example, his "conquest" of Donna Lucrezia Castelli, the Neopolitan woman Casanova seduced during the course of a long carriage trip from her hometown to Rome in 1744, as described by Judith Summers in "Casanova's Women."

"The vettura (carriage) was a small, slow-moving vehicle pulled by a single team of mules, and the journey north would take six days and entail five overnight stops at rustic coaching inns along the way ... for a flat fee a vetturino (driver) made all the sleeping and eating arrangements for his passengers, whoever they were, and in order to make as much profit as he could from the trip he would hire only one room for all of them at each inn."

It is easy to see how Casanova and Lucrezia, sleeping just a few feet from each other while her oblivious husband snored away, wound up lovers. Throughout Summers' book, proximity breeds promiscuity. Casanova's famous loss of virginity to two Venetian sisters, Nanetta and Marta Savorgnan, happened when he was forced to "innocently" share their room due to a lack of a guest bed in their home. Despite a promise to behave, the boy just could not help himself once the three of them were tucked into the room's sole bed. "By the time he opened his eyes again the candle had been snuffed out, the room was in total darkness and the sisters, dressed only in their loose linen chemises, lay curled up on either side of him, both apparently asleep. His word of honour that he would not molest them, which he had given only minutes earlier, suddenly counted for nothing."

Sixteen years later, Casanova once again found himself in a communal bedroom situation with Donna Lucrezia, although this time the extra bedmate was Leonilda, the illegitimate teenage daughter from their first affair.

"For Casanova, who with good reason counted himself 'the happiest of mortals' to have both beauties in bed with him, the moment was so exciting that he lost his usual exceptional self-control. Forced to withdraw before he ejaculated, he left Lucrezia unsatisfied. 'Moved to pity, Leonilda helped her mother's soul on its flight with one hand, and with the other she puts a white handkerchief under her gushing father,' [Casanova] later wrote ... Leonilda then demanded that Casanova look at her while he kissed her mother. This three-sided doubly incestuous combat continued until late in the night and resumed at dawn."

We'll deal with Casanova's disturbing penchant for incest later, but for now the reason for highlighting the sleeping arrangements is to point out that these were very different times from our own well-furnished era. Casanova and his lovers lived in a period where intimacy and constraint were commingled in ways it is often challenging for us to understand. Although it is tempting for us to think of our ancestors as living in a sexual Stone Age, in many ways they were capable of a sophistication that can only be bred when there are great obstacles to be overcome. This seems particularly true for Casanova's women. Far from being ignorant virgins ripe to be tricked into the sack, or frivolous society women looking for hedonistic pleasure, they prove to be a remarkably resourceful and occasionally empowered group for whom sex with the libertine could be an act of rebellion instead of dalliance or capitulation.

Take Casanova's mysterious "MM," for example, who historians now agree was almost certainly Marina Morosini. Born into a patrician family, she wound up, like so many women of her time, an unwilling nun at the notorious Venetian convent of Santa Maria degli Angeli. As Summers points out, residency at a nunnery had more to do with grim socioeconomic reality than with any religious vocation. "Being forced to become a nun was a common fate of the unmarried daughters of Venice's noble families, not least because the dowry required to become a bride of Christ was far less than that required to secure a good husband." Bridling to find herself held in this de facto prison, the 22-year-old set out to seduce Casanova after spotting him in the convent's chapel. (He was already romancing two other nuns.) Through a variety of maneuvers that would qualify her for membership in any spy agency, MM was able to get word to Casanova that she wanted him as a lover. (She was already sleeping with François de Bernis, the French ambassador to Venice.) Before long, they were making love in the secret apartment de Bernis kept for her, complete with "a pretty box filled with hand-made condoms" and a peephole so the voyeuristic Frenchman could watch her and Casanova make love.

This sort of empowerment was not available just to women of the upper classes. A decade later, in London, Casanova would once again find himself more prey than predator in his relationship with 17-year-old Marianne de Charpillon, a beautiful young gold digger "born into a family of unscrupulous prostitutes." Arriving at a time when Casanova, "at thirty-seven, was beginning to show his age," Marianne proceeded to run him ragged with flirtatiously manipulative behavior that had her extracting serious money from him. Fate, in the form of family and society, may have decreed she was to be a working girl, but that didn't mean she was not going to work all the angles.

And then there is the case of Teresa Lanti, who, when Casanova met her, was disguised as a castrato named Bellino so that she could sing on stages that were off-limits to women. Her disguise consisted of much more than just a stuffed bodice.

"Since it was common practice for castrati to have to undergo intimate examinations by priests or theatre owners anxious to avoid prosecution by the Church for unwittingly employing a female singer, [her manager] supplied Teresa with a small prosthesis that would give her the appearance of having a penis. It was 'a kind of cat-gut, long, limp and as thick as one's thumb, pale, and of very soft leather' [Casanova reports] surrounded by an oval of transparent skin five or six inches long. Teresa quickly learned to attach it to her own genitals with gum tragacanth, a glue made from a shrub."

Casanova's playful insistence that she wear this prototype strap-on during sex is endearingly deflating of his macho myth, as is his frank acknowledgment that by the time he hit 40 he was suffering from erectile dysfunction. In fact, Casanova turns out to be less of a swordsman than one would think, his reputation resting more on his willingness to write frankly about his sexual encounters than their sheer volume. If you simply do the math, Casanova's lifetime total of 116 lovers is probably less than a second-string NBA power forward or heavy-metal bassist gets through in a year.

Of course, all is not fun and games here. In Summers' account there are plenty of women who never had a chance to gain the upper hand on Casanova, or even achieve a moment's equal footing with him. Venereal disease, pregnancy and social disgrace awaited many of those who responded to his blandishments. Another inmate of Santa Maria degli Angeli, 14-year-old Caterina Capretta, was basically pimped out to Casanova by her debt-ridden brother and soon found herself pregnant. Her subsequent miscarriage is described in horrific detail. "She lay propped up in bed on pillows, bleeding copiously into a large wad of linen napkins ... when [Casanova] saw the number of blood-soaked napkins ... he 'nearly dropped dead. It was sheer butchery.'" And then there is the fate of Lucia, the beautiful, vivacious caretaker's daughter with whom Casanova was infatuated as a teen. She eventually eloped with another young man, who ditched her after she gave birth to their child. Casanova was to bump into her 20 years later in an Amsterdam brothel, where her inevitable slide into whoredom hit rock bottom. "Debauchery and, no doubt, repeated cases of venereal disease had completely obliterated her natural beauty and vivacity, leaving her with no alternative but to make a living by becoming a pimp herself and procuring customers for younger, prettier girls."

More troubling still for the modern reader are Summers' accounts of Casanova's sexual encounters with adolescent girls, some as young as 11. The author takes pains to place these acts in context. "In the eighteenth century, Casanova's behaviour, which today would be regarded as criminal, was not that unusual. The concept of childhood as we know it scarcely existed at the time. In France there were no laws to prevent the rape or sexual abuse of children. In England, the age of female consent, which in 1275 had been fixed at twelve years old under canon law, had in the late sixteenth century been lowered to just ten." Casanova's activities as a seducer become even more transgressive with his attempts to sleep with two of his daughters, one of whom he wound up impregnating. Summers is less willing to chalk this up to the tenor of the times. "Nevertheless, the idea of committing incest with one's young and beautiful daughter was far from repugnant to him ... as he wrote, shocking even us today, 'I have never been able to conceive how a father could tenderly love his charming daughter without have [sic] slept with her at least once.'"

Despite a wealth of vivid detail and salacious anecdote, one comes away from this book more tantalized than satisfied. Summers' breathless, cliché-ridden style tends to undermine her authority, such as in the following passage. "Equally at ease in a palace, a merchant's house or a brothel, and most at home between a woman's legs, Casanova successfully straddled the worlds of the high life to which he aspired, and the low life into which he had been born. Steering a course through both, but putting down roots in neither, he followed only one precept in his life -- to go where the wind blew him -- and he crisscrossed the continent of Europe as often as the migrating birds." There also does not seem to be much in the way of original research here -- the preponderance of the author's notes cite Casanova's memoirs, suggesting a limited portrait of his "conquests." In the end, Casanova's women, or at least the cross section of them provided in this book, remain opaque. Despite the abundant detail on offer about their histories, there is precious little to suggest how they actually felt about their dangerous liaisons, or what brought them to risk so very much to be with Casanova. The one question you really want to ask remains unanswered -- was it good for them?