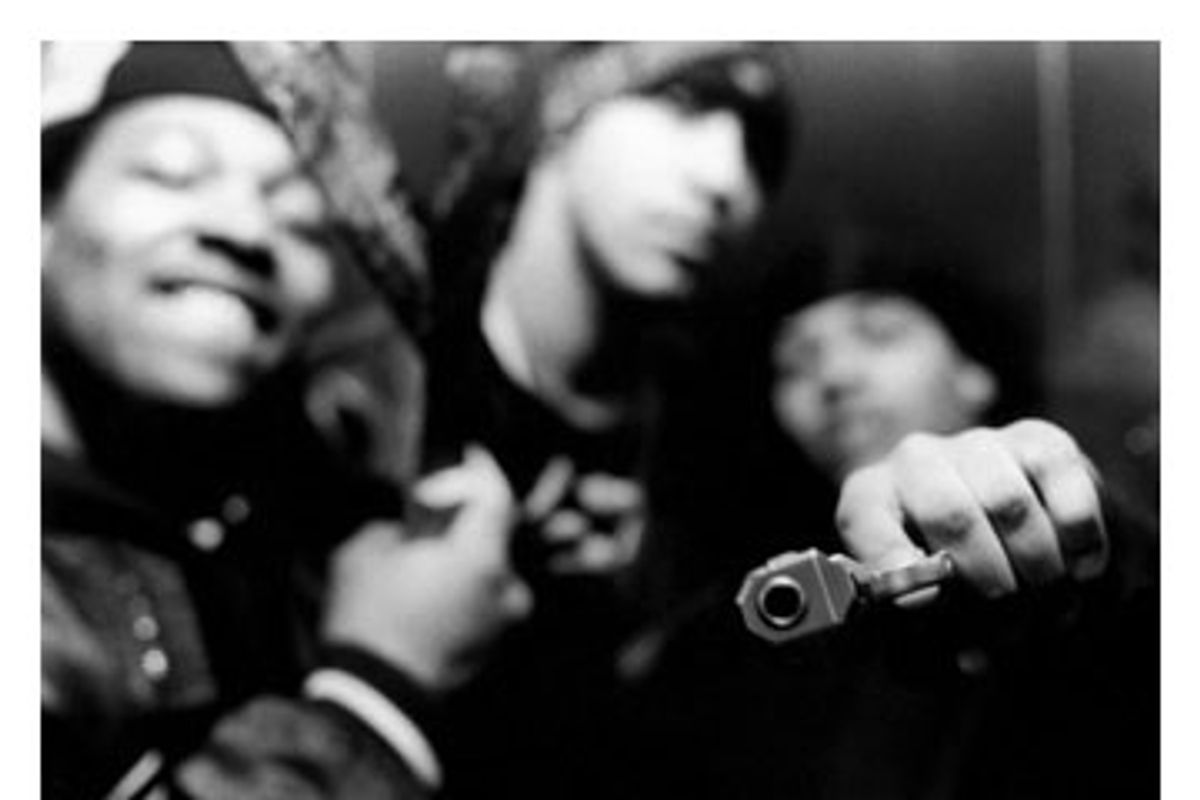 America's unending war on poverty and drugs has been about as successful as its unending war on terror, mainly because its enemies are abstractions. Meanwhile, the real worlds (not the ones you see on MTV) of drug and thug culture have been left to wither, like its victims and champions, beneath a glossy simulacrum.

Few are those souls who seek to document and transmit the routinized pain and addiction of these worlds -- worlds filled with everything but Cristal Champagne, Hummers and supermodels. Rather, they are the scenes of unending wars whose only victory is another fix; once each fix is achieved the whole process starts over again like a nightmarish rerun. So it should come as no surprise that those who journey into the hearts of darkness that pump lifeblood into these circular hells might know their way around a war zone.

Such is the story of the photographer Boogie, whose gritty photography collection, "It's All Good," out now from New York's powerHouse Books, chronicles the lives of thugs, hustlers and addicts without artifice. Currently based in Brooklyn, N.Y., he was born and raised in Serbia, and was eventually mired waist-deep in that conflict-torn country's unremitting violence and war during the '90s. After serving his stint in the military and getting lucky with a lottery draw for a green card, he fled the country for safer environs, only to be pulled back into the violent battle for the soul's deliverance, this time in a drug-addicted New York that looks nothing like the megamall environs favored by Rudolph Guiliani, George Pataki and Michael Bloomberg. In fact, "It's All Good" is a visual document that would most likely give those three fits, filled as it is with could-give-a-fuck individuals living fix to fix, fight to fight, weapon to weapon.

Of course, Boogie himself, like every American immigrant or native, is negotiating both worlds, shutterbugging for Nike (a company that knows more than a few things about image manipulation and capitalization) and other clients to keep the bills paid as he pursues the addicted phantoms that inhabit the United States' invisible, ignored streets and ghettos. If only to find, in the end, that true reality, the kind that creeps up behind you execution style, will not, if ever, be televised. We exchanged a series of e-mails in between Boogie's hectic promotion of "It's All Good" and a project for Nike.

Reading and viewing "It's All Good," one gets the feeling that heroin and crack, not weed, are the real gateway drugs.

Heroin and crack are never the gateway drugs; they are the end of the line. All of my subjects started out with marijuana, and then moved on to something stronger. And once you start smoking crack, you'll do anything. Pop pills, shoot up, snort coke, anything just to get out of your own head. Junkies are unhappy people living a miserable existence.

What is it about heroin and crack -- and the worlds and economies they create -- that opens lives up to so much pain?

Being a junkie is a full-time job. Half of the day you hustle to get money for drugs, and the other half you're stoned or high. Deep inside, they are all sick of that life, but not strong enough to change it. Hopeless, suicidal behavior sometimes kicks in, so they go deeper and deeper, pushing limits all the way.

Which brings up another interesting aspect of your work: Its fearsome haze is firmly centered in everyday life, not some visual arts experiment. Does "It's All Good's" focus on the gritty routine of that everyday life bring the surreal life and real life closer together where they belong? Do some take their homogeneous lives too seriously, especially when the troubled lives of those around them (in Iraq, in New York City, in "It's All Good") go on without notice?

There are different kinds of reality and I can only speak from my own experience while working on this project. It wasn't easy for me to hang out with "normal" people. It all seemed kind of fake and weak compared to the reality I was witnessing every day in and around the projects. Since I've never been a junkie or a gangster I don't know why they live in the reality they do. These are questions only they can answer. But it is my hope that the texts I have provided in the book will shed light on their lives. All I did was bring a tape recorder to my subjects and say, "Hey, do you want to tell me your story?" They did.

Race is all over this book, like guns. For years, these drug and gang wars have been portrayed as racial conflicts, but they're being revealed more and more as economic ones. Would you agree?

So where do you find yourself, as the messenger, in all of this?

As a photographer, it is my mission to connect with people and to enter their lives on an intimate level in order to show what is there, without analyzing how they live or passing judgment on their choices. So I'm a documentary photographer who got in too deep on this one. There is a line you shouldn't cross as a documentarian, but the deeper you go, the better photos you will take. "It's All Good" was my life for two to three years. In fact, it took over my life, and messed it up a bit, I would say. It was heavy, although not while I was shooting because when I'm behind the camera, I turn my emotions off. But it all stays in your head and gets to you later. I think it was worth it. But yeah, the entire project was very heavy at times. And I wanted to make the book for some time because I wanted to leave a mark -- my mark, their mark -- to show that we were here. How has your background influenced your work?

I was born in Serbia in 1969 and lived there until 1998. The war started around 1990-1991, when I was in my early 20s. It was really fucked up. We had 10 years of war, economic crisis, U.N. sanctions, all kinds of misery. I was out of the army by then, but I know many people who fought. That was our reality for 10 years. I never intended to leave, but I got a green card in the lottery so I went. I came to New York in 1998 as an outsider, an immigrant. At first, I lived in Queens, but I moved to Brooklyn in 2001. I had begun taking photographs when I lived in Serbia to document the world around me. In fact, my first personal project was to document Nazi skinheads in 1996 -- some of whom were friends of friends. I had access to a world no one else had, and for that, I won some awards. Then I started shooting for some papers on a freelance basis, documenting protests, poverty, Gypsies ...

Sounds like that all prepared you for the Big Apple's rotten core.

When I moved to New York, I sent my portfolio around but nobody wanted me. So I stopped trying to join the agencies, magazines, book publishers, all of that. I pursued my own shit. I lived in Williamsburg, but there was nothing to shoot there. So I started going deeper into Brooklyn and immediately felt at ease. It was easier for me to relate to people who live an everyday struggle than to those whose lives are secure. So I began to meet people on the street, first crackheads and dope fiends. They welcomed me and let me into their lives right away. Dope was big in my country during the war; it was very cheap and some of my friends died of overdoses. So to see it again was kind of familiar and unthreatening.

Did any of your subjects have a problem with you? And why did you start with the gangsters? I wanted to meet gangsters because I wanted to go to the source. And it was pretty easy: They approached me because I'm a white guy who's not scared to walk around a black neighborhood with a camera. A week later, they asked me to take pictures of them with guns. I understand they have to do what they have to do to survive. Sometimes good guys do bad things. These people live in an insular world; few of them ever get out and even less visit. But they allowed me into their lives and I am grateful for it. And as a photographer, I sought to present them only as they are and as they want to be seen -- to show the same respect they gave me. It is not for me, a white Serbian guy, to explain, judge or defend their choices and their actions. I think my photos do them justice.

Let's talk about the glamorization of thug life and where "It's All Good" fits or resists that matrix. Its straight-ahead vibe seems like it wants the subjects to tell their own stories, but its manipulations of the documentary style make it hard to tell what's cashing in on the game and what's an earnest social statement. Your thoughts?

I hate to judge people, and I don't have right to do that. Who am I to judge somebody? All these people from the book could have been me or you, and it's not too late for that to happen. Life has weird turns, and you never know what might happen. My idea was to show life as it is, and as it is it's not "Sex and the City" for all of us.

Do you think the pop crossover of gangsters has blurred the lines between capitalizing on the culture and the art of documenting it?

Knowing what I know about ghetto life, I don't quite understand its glamorization through rap music. I think the first thing any of these rap stars do when they get rich is get the hell out of the ghetto. I don't listen to rap music. I don't know anything about thug life. If someone sees that relationship, that is their perception but not my intention.

Is "It's All Good" a social statement? What would you like a reader to come away thinking and feeling after experiencing it?

I don't want to moralize or preach but only show life as it is -- raw and fucked up at times but not without hope. I cannot say what someone should think or feel after looking at the book; that's something I leave to them. But the idea is simple: Look, hipster, this is what's happening in a 10-minute walk from where you live. Not that you can and should do anything about it. But be aware of it.