Kate Winslet and Cameron Diaz trade places -- and fall prey to one of cinema's leading schlockmeisters. 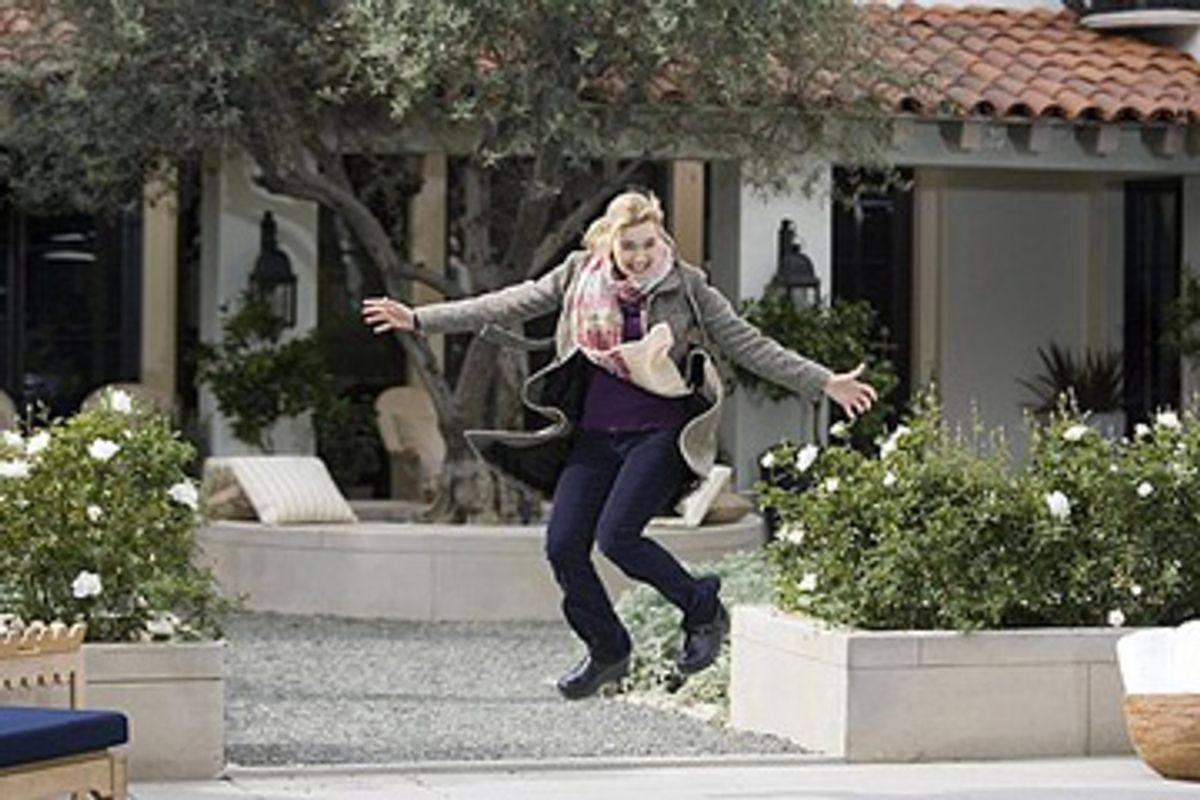 Here's the good news: "The Holiday" springs from a terrific romantic-comedy premise. An Englishwoman (Kate Winslet) and an American (Cameron Diaz) switch houses, and countries, for two weeks, during which time each meets the man of her dreams.

Here's the bad news: It's written and directed by Nancy Meyers.

Meyers doesn't bless us, thank God, with an offering every Christmas. Yet the gap between pictures is never nearly enough time to recuperate. For Meyers, the surest way to reach the so-called chick-flick audience (which consists of men as well as women) is to condescend to it: Movies like the 2000 "What Women Want" and the 2003 "Something's Gotta Give" seem to have been assembled from marketing-survey checkboxes, which is far easier than wrangling with actual characters or complicated emotions. (Are over-50 women sexy? Yes. Is it OK if they date younger men? Sometimes. But it makes everyone more comfortable, doesn't it, if they seek out age-appropriate mates? Absolutely.)

Meyers' movies would be far less offensive if they were simply shiny, shallow entertainments. But they always read like pronouncements, monitor readings of how "real" women think and feel. Women -- and, for that matter, men -- who don't respond to Meyers' pictures are often accused of being out of touch with "real" women. (I have the e-mails to prove it.) But if Meyers' movies are proof of anything, it's that the tyranny of what "real" women -- and please note the flagrantly ironic quotation marks -- think the rest of us should buy in to is just as constricting as anything the patriarchy ever served up.

Female fantasies fly fast and furious in "The Holiday," and to a point that's not a bad thing. Winslet's Iris is a newspaper writer who works in London, commuting from a cozy cottage in Surrey that's like a Christmas-card vision. Devastated by the news that the workmate she has long been in love with (played by the rakish Rufus Sewell) is engaged to another woman, she agrees to a house swap initiated by Los Angeles go-getter Amanda Woods (Cameron Diaz). Amanda has just dumped a dud boyfriend (played by dud actor Edward Burns). She also realizes that, as the owner and head honcho of a movie-advertising company, she simply works too hard. She wails to her underlings: "You know what I want to do? I want to eat carbs without wanting to kill myself. I want to read a book -- not a magazine, an actual book." She says the word as if she were speaking of a mysterious totemic item that had not yet reached the shores of L.A.

It's just before Christmas, and both Amanda and Iris are ready for immediate change. So Amanda treks to Iris's sweet little cottage (we're treated to your stock sequence of the overdressed diva slip-sliding through the snow in her precarious, prohibitively expensive stilettos, lugging a steamer trunk's worth of costume changes), while Iris decamps to Amanda's luxury hideaway mansion (which, to her amazement, is kitted out with state-of-the-art features like a bedside button that automatically lowers the bedroom shades, making sleeping past noon a snap).

In Los Angeles, Iris strikes up a platonic friendship with Miles (Jack Black), a film composer who already has a girlfriend. In Surrey, Amanda meets Graham (Jude Law), Iris' brother, who, not knowing Iris is away, stumbles up to the cottage door after a night of revelry at the pub -- and ends up spending the night in Amanda's bed.

Of course, before these two very different relationships can flower into romance, various complications need to be planted and then plucked away. But all of that takes forever: "The Holiday" drags on for more than two hours, long enough for even the most ardent suitor to lose interest. The premise, so delectable at the start, quickly begins to feel tired and oversold. One problem is that Diaz -- often a charming actress, with a gift for gangly physical comedy -- can't distract us quickly enough from how whiny and superficial her character is. Amanda needs to change (that's the point), but it's hard to feel sympathy for a woman who, being driven through the English countryside in the back of a luxury car, can barely be bothered to lift her eyeshade to glance at the scenery.

Law's Graham is more appealing, at least at first. When Amanda introduces herself to him, rushing through her first and last names as if she were reading them off her business card, he distractedly asks her, "Is that all one word?" But Law -- a dull, pretty actor who may yet prove to have a gift for light romantic comedy, at least if he gets the right writers and directors -- is let down by the script. At first, we're led to think he's a charming cad; then we realize he's something closer to a saint. A bad boy and a good boy all rolled into one, Graham is the Holy Grail of fantasy boyfriends, and it's hard to give a lively performance when you're stuck playing a sacred vessel.

Black and Winslet fare slightly better, although Black has relatively few scenes, and even then, his generous reserves of dude charisma aren't enough to sustain the performance. But as I suffered through "The Holiday," Kate Winslet became my life raft. Iris, when we first meet her, is a puddle of insecurities. But Winslet doesn't build her character from schleppy-sweater mannerisms. Her Iris is almost immediately likable and only momentarily pitiable. (Meyers gives Winslet some sap-head dialogue, but it's not enough to sink her.) Iris does a jig of delight when she steps into Amanda's vast, posh living room, which is a far cry from (though not necessarily better than) the slouchy sofas and chintz-covered cushions she has at home. The suggestion is that the novelty of change is enough to thrill Iris; she has a capacity for pleasure that she isn't yet aware of.

In "The Holiday," Winslet is a friendly presence in territory that seems otherwise hostile, or at least just sterile. And she has some lovely scenes with Eli Wallach, who plays Arthur, the elderly screenwriter she befriends. He gives her a list of movies to watch, movies from the old days, starring leading ladies with, as he puts it, "gumption," women like Barbara Stanwyck and Irene Dunn. Arthur sees that kind of vibrancy and spirit in Iris, and he wants her to see it, too.

On paper, that sounds absolutely lovely. So why does "The Holiday" make even this sweet, simple notion -- and every other remotely promising idea in the movie -- feel like a by-the-numbers exercise? The aggressively twinkly score, by Hans Zimmer, doesn't help. (The movie also features a dumb, self-referential joke, in which Miles, giving Iris a quick movie-music tutorial as the two browse the racks of a DVD store, grabs a copy of "Driving Miss Daisy" and burbles on about its terrific score by "Hans.") But beyond that, the problem may be that Meyers has all the right references; she just doesn't know what to do with them other than tick them off her checklist. Barbara Stanwyck is a name she's heard of, not someone who's taken up residence in her heart.

At one point Wallach's Arthur peruses the paper and exclaims with dismay that there are nine movies opening that Friday; in the old days, he says, you wouldn't have nine movies opening in one month. "This is supposed to be conducive to good work?" he asks rhetorically, and you wonder what this sage truth teller is doing in the middle of a movie that might as well have been extracted from the responses on a test-audience questionnaire. Meyers seems to be making a statement about the disposability of current Hollywood movies. So why do her own pictures have all the soul (and all the humor) of a flushable household product? Maybe, deep down, Meyers wants to be part of the solution. But how do you take that road when being part of the problem makes so much money?