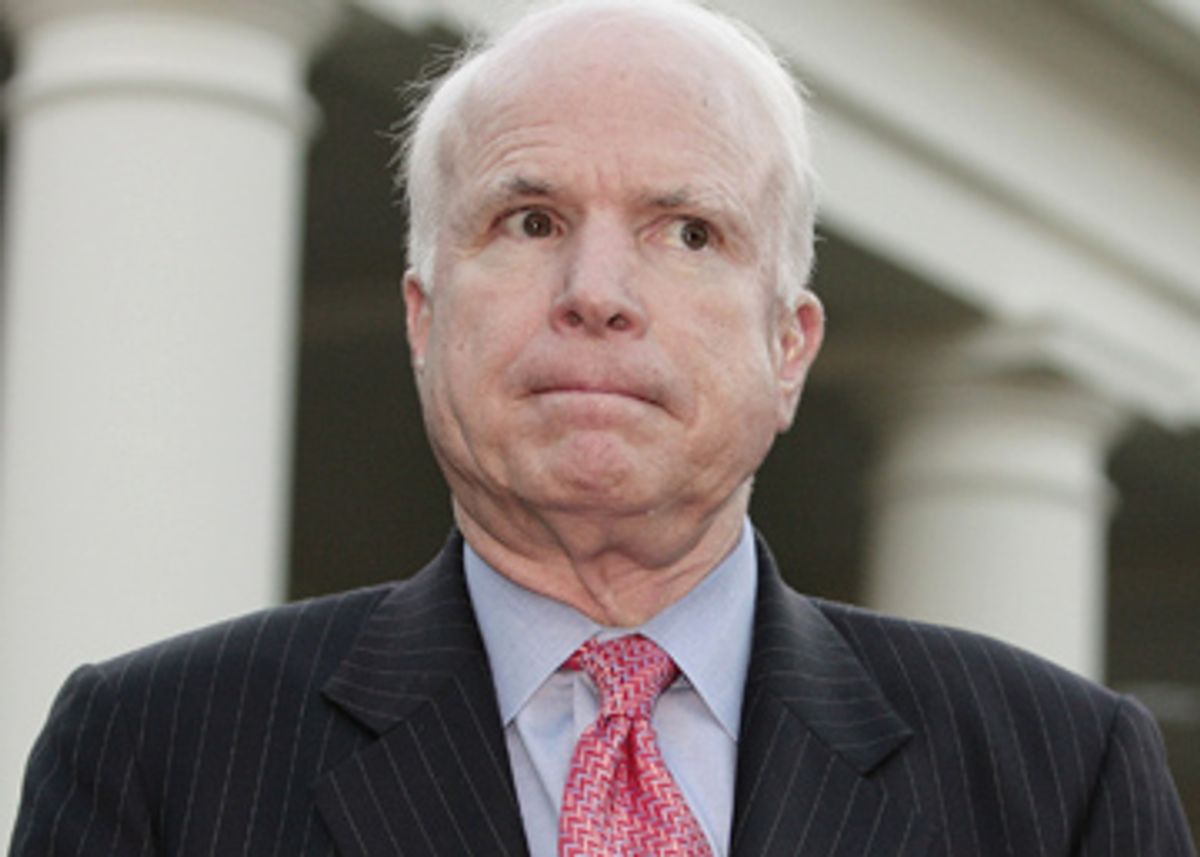 With the broad establishment acceptance of the Iraq Study Group's new report, the embattled neoconservatives have clearly lost the debate over Iraq. Their belligerent foreign policy has been universally discredited. Their strategic fantasies have led the United States into a losing war, to the great detriment of American security and prestige. Today their desire to send tens of thousands more troops into the Iraqi quicksand is shared by less than 10 percent of their fellow citizens, according to recent polls.

Yet even now they still can boast the support of the most formidable Republican presidential candidate expected to stand in the next election: Sen. John McCain, the last neocon.

At this late date, very few politicians are as eager as the Arizona Republican to echo the calls for escalation in Iraq now heard from neocon opinion leaders in the Weekly Standard, the Wall Street Journal, the National Review and the New York Post, whose front page caricatured James Baker and Lee Hamilton as "surrender monkeys" on the morning after they released the ISG's findings. Among his Capitol Hill colleagues, McCain was almost alone in joining the right-wing attack on the bipartisan Baker-Hamilton Commission, whose report dismissed demands for additional combat brigades as unrealistic. He was enraged by the report's emphasis on political negotiations and on the excessive costs of the military effort. "Sustained increases in U.S. troop levels would not solve the fundamental cause of violence in Iraq, which is the absence of national reconciliation, Meanwhile, America's military capacity is stretched thin: we do not have the troops or equipment to make a substantial, sustained increase in our troop presence. Increased deployments to Iraq would also necessarily hamper our ability to provide adequate resources for our efforts in Afghanistan or respond to crises around the world."

Over and over again, regardless of the realities on the ground and in the armed forces, McCain urged President Bush to deploy enough additional troops to Iraq to constitute an overwhelming force, although the specifics of his plan (and exactly where he hopes to find several brigades of trained, equipped and combat-ready soldiers) remain murky. The credibility he earned from his suffering in a North Vietnam prison camp -- as well as his reputation for blunt honesty -- evidently exempts him from answering difficult questions about his plan for "victory."

According to McCain, there is no alternative to winning except losing, and losing would create an existential threat to the United States. "The consequences of failure are so severe that I will exhaust every possibility to try to fix this situation," he recently told George Stephanopoulos on ABC's "This Week." "Because it's not the end when American troops leave. The battleground shifts, and we'll be fighting them again. You read Zarqawi, and you read bin Laden ... It's not just Iraq that they're interested in. It's the region, and then us." He doesn't seem to understand that the late Abu Musab al-Zarqawi's "al-Qaida in Iraq" organization is only a small part of the Iraqi insurgency, most of which is devoted solely to expelling the U.S. occupation.

McCain's willingness to call for a deeper commitment to the war, however, has won praise and admiration even from those who have come to feel that he is wrong, simply because his views are unpopular. Wrote columnist George Will, a recent critic of the neocons, McCain brings a "steely" moral clarity to the Iraq debate. But there are more skeptical ways to assess the senator's "straight talk" about Iraq.

Despite his bullish claim that more combat troops are available for deployment, McCain almost certainly knows the contrary to be true. Last month the Washington Post (a newspaper whose editorial page strongly supports the war) reported that top military officers and defense analysts think that McCain's escalation scheme is "implausible" and probably impossible. Not only would increasing troop levels inflict severe stress on the already strained Army and Marine Corps, but the results would be far less significant than the senator has suggested. For someone who constantly touts his concern for soldiers and their families -- and who is no doubt sincere -- the former POW sounds strangely oblivious to the extreme price they pay during repeated rotations back into Iraq. He also sounds ignorant of the long-term danger to the American military posed by the war's costs.

Does McCain really expect that the president and the Pentagon will accept his advice? Or is he merely positioning himself for the war's aftermath, when he will claim that his spurned counsel could have won the victory that eluded Bush? Is he truly an idealist -- or is he a cynical demagogue? The answers may be impossible to know. There is much evidence that he values his integrity, and much evidence that he values his ambition even more.

But it is worth remembering that McCain still believes American forces could and should have "won" the war in Vietnam. Someday perhaps one of his admiring interviewers will ask him why he thinks we ought to have sacrificed the more than 50,000 American lives lost in that atrocious debacle -- and how many more American lives he thinks we should be willing to sacrifice in this one.