Science writer Timothy Ferris examines the latest evidence of water on the red planet -- and why millions of people could end up living there. 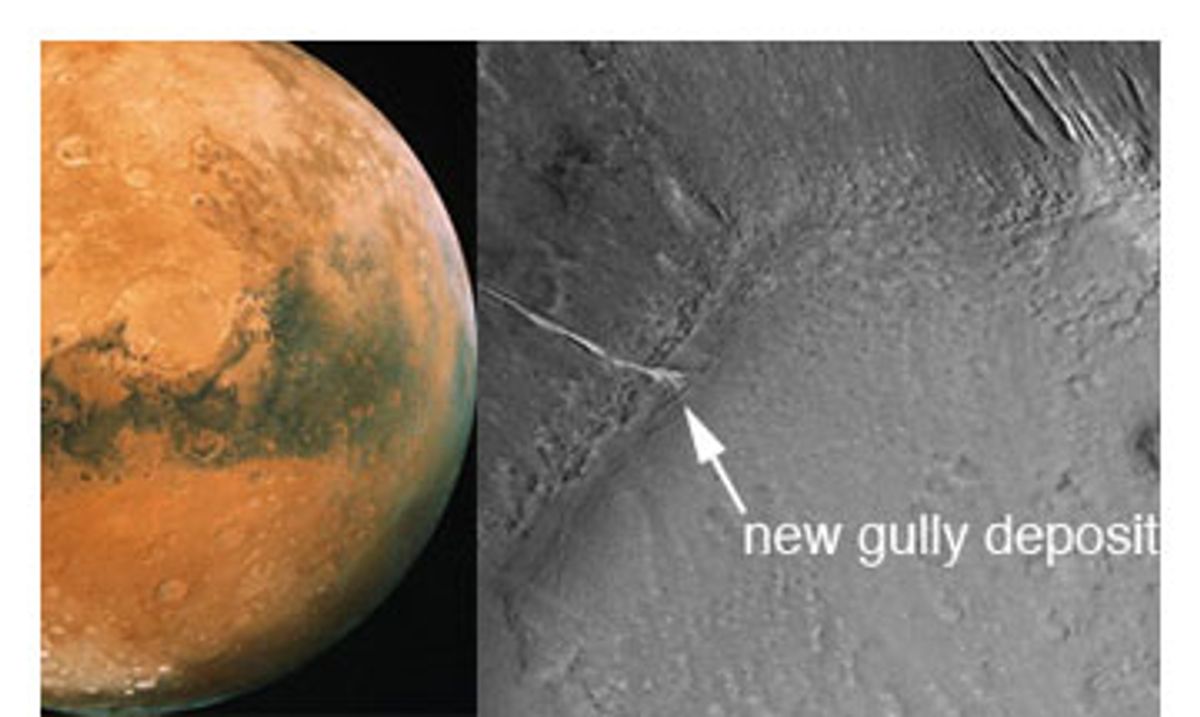 Long a setting for science fiction, Mars appeared to orbit a little closer to our own reality this week with the revelation that the planet might be hospitable to life. New images taken by NASA's Mars Global Surveyor showed changes in craters that researchers say are evidence that flowing water, vital to sustaining life as we know it, existed on Mars' surface as recently as several years ago.

Acclaimed science writer Timothy Ferris says that the discovery is significant -- and could support the prospect of as many as 500 million people one day living on Mars. Ferris, a professor emeritus at the University of California at Berkeley, has written 11 books, including "Coming of Age in the Milky Way," which was awarded the American Institute of Physics Prize and nominated for a Pulitzer. He spoke to Salon by phone from his office in San Francisco.

Why is finding water on Mars significant?

One reason is that Mars is, of all the sun's planets, the most promising second home for humanity. If some day humans are to live permanently on Mars, we need to know what the Martian water table amounts to and how much water is there. For many years, we've believed there is water on Mars because there's ample geological evidence that liquid water existed on the surface of Mars long ago, when Mars had a denser atmosphere and somewhat warmer temperatures. When Mars turned colder, there's no mechanism by which all that water would have disappeared, so it's almost certainly tied up beneath the surface as permafrost, like the water beneath the lands of northern Alaska.

The question is, how much? For decades, it's been thought that there is at least as much water on Mars as there is in the Great Lakes and possibly a good deal more. So, if in fact there are still traces of liquid flowing water on Mars, as these photos suggest, then that would tend to encourage those who believe that there's enough water to support significant human habitation.

Is the water accessible? Could we use it in ways similar to the way we do on Earth?

There are lots of ways you can access permafrost. An extreme example was the announcement of plans for a lunar base that would be located near the pole. That's in part because at the pole you can get a steady supply of solar power. Water is always useful, it's not that difficult to find in the solar system, and it's not a big deal to melt it. If you wanted to live on Mars, you'd have to warm [the inhabited area] up anyway, and that would defrost the water. If you warmed Mars up to the point where the atmosphere was re-engendered and thick enough for oceans, you could also introduce water by diverting an icy comet, and crashing it there, if you wanted to be brutal about it.

The idea of human habitation on Mars, or even extraterrestrial life -- is that crazy?

No, it's not at all crazy! We know that life on Earth requires at least some water, so if there had never been any water on Mars, as may be the case with some bodies in the solar system, then that would decrease the odds of there having been life in the past. We know life on Earth is quite tenacious, so if life existed on Mars in the past it's possible that it's still there in some form. We don't know. The debate about water on Mars, and how much there is and under what conditions, has gone on for decades. There have been long swings of the pendulum back and forth. One of the first space probes to fly past Mars imaged craters that led to unnecessary pessimism in the sense that, since it has craters, Mars must be like the moon. But Mars isn't like the moon -- the more [evidence of] water on Mars, the more likely there is still some liquid water there, and the greater the likelihood of forming life.

Does the water suggest Mars supported other life forms in the past -- or does in the present?

We have no idea. There's just no conclusive evidence. It's like the question about intelligent life in the universe -- we swing back and forth on a pendulum. Currently, we're in one of the pessimistic periods, that there's no life on Mars. It's cold there and the atmosphere is thin. If there was life, there'd be fossils there -- but we just don't know.

Where would you rank this among space discoveries? If on a scale of 1 to 10, landing on the moon is a 10, for example.

If this holds up, I'd give it a 7. To my eye, it is very difficult to think of a viable explanation for this photo besides liquid water, but one wonders, perhaps, if there is some sort of landslide that could replicate the appearance of water. There certainly are odd landslide events that we know of -- the singing sands, and so forth. I know a number of scientists believe it is water, and if true, it's pretty important.

In terms of short-term exploration, this finding doesn't tell us there's water on Mars. It just suggests [a greater possibility] than the pessimists would think. The difficulty with missions to Mars is that it's so far, and it's far away from the sun. It's like going uphill. Any way you can arrange to explore Mars without taking everything with you is useful. One strategy [for further exploration] is to send unmanned missions to establish rocket fuel manufacturing plants -- one of the advantages of water is that you can break it down to make rocket fuel. If it were easy to get at water on Mars, it would vastly decrease the cost of getting home.

The long-term exploration of Mars is subject to the same economic dynamics we've seen in other forms of exploration and settlement. Can people find a way to make money and make a living from it? The prospect of opening up a whole new world would appeal to some people, but economically you have to find a way to make it work. Putting millions of people on Mars is not within the financial plausibility of any combination of space agencies. It has to have its own motors. Look at the history of the Western frontier in America. It was a combination of government incentives and financial speculation and the willingness of people to endure hardship. And in the long run, it did work. I live in California, and I wouldn't be here on the phone if we hadn't explored the West. My guess is that exploration of Mars will work.

Scientist Stephen Hawking has talked about the importance of extraplanetary colonization. Is settling on Mars a necessary or even viable solution to global warming or the population boom?

Colonizing other planets is not a solution to population growth. The motive for colonizing other planets is, first of all, insurance. Any species that has habitation on more than one planet has obviously purchased a kind of insurance policy against global catastrophe on any one planet. That's a very valuable asset to have. Then there's exploration. Humans have always been an exploratory species. Mars is a small planet, but because it has no oceans, the surface of Mars is equal to the dry land surface of Earth. So if you start to explore on Mars, you can establish a foothold on a planet that, for practical purposes, can serve as a second Earth.

The conditions on Mars are harsh at present, but there's been a lot of study on terraforming -- altering the climate to make it more attractive to humanity. It's a challenging long-term project, but it may be viable at some point. If there is life on Mars, then a number of questions arise. First, did it arise on Mars separately from Earth? If so, there might be a strong argument for leaving it alone. Another possibility is that both Earth and Mars have life from a single common origin. Life might have been transported to Mars through impact events that knocked life off this planet. And pieces of Mars have been found on Earth, so this stuff does migrate around and could carry organisms with it.

Then there's pure exploration and having a frontier for people who are prepared to live on the frontiers. When you look at a problem like global warming, people dismiss it because they don't know all the answers -- but that's the point. We're conducting a global experiment without understanding how planets operate. The Earth for much of its history has not been a planet where humans could exist. That's a fact that humans are taking hard. I don't mean that we can't get global warming under control, but I'd feel more confident about the human species if we had 500 million people living on Mars. That's entirely possible.

Extraterrestrial life and extraplanetary colonization haven't been considered scientific possibilities for very long, have they?

When I started in astronomy a half century ago, one of the things we knew was that stars were rather sharply divided between those that rotate rapidly and those that rotate slowly, with few examples in between. The mechanisms that made stars rotate more slowly was the formation of planets. If a star forms with a proto-planetary disk out of which planets congeal, that disk has a braking effect on the rotation of the star through centrifugal force and slows the star down. So we used to see in books a half century ago speculation that since the sun is one of those slow-rotating stars, maybe other stars out there have planets.

That's turning out to be true. Over two hundred planets and other stars have now been identified, and research continues. So there are a lot of worlds out there and a lot of potential for life, and there's nothing in the history of Earth to suggest that it is unique.

Life started on Earth quite early, and the formation of life on Earth was a wholly natural event. On other Earth-like planets there could very well be life -- and on other planets, things that we don't think of as life. We only know one form of life, and for us, all forms of life are related. Everything living on Earth is descended from the same organism. Naturally, we find it difficult to imagine what other forms of life would be. You see that in science fiction all the time. Our attempts to depict aliens are always pathetically conservative: They're always squidlike, or people with pointed ears.

As far as we can tell there are only three requirements for life. You need an energy source of some kind that has a gradient to it, like the sun. The sun is hot and on the other side of the planet it's cold, and the differential allows a potential organism to use that energy. But the energy source doesn't have to be the sun. Second, you need some nutrient, a chemical that can be used by a recipient organism to build itself -- and that stuff is abundant in the universe. Every planet with a hot core is an energy source. Third, you need an encoding system to quantize genetic information. That function is taken up on Earth by DNA. Those three conditions must be extremely common in the universe. We don't have any reason to think life on Earth is miraculous or unusual.

Adrienne So is an editorial fellow at Salon.

MORE FROM Adrienne So