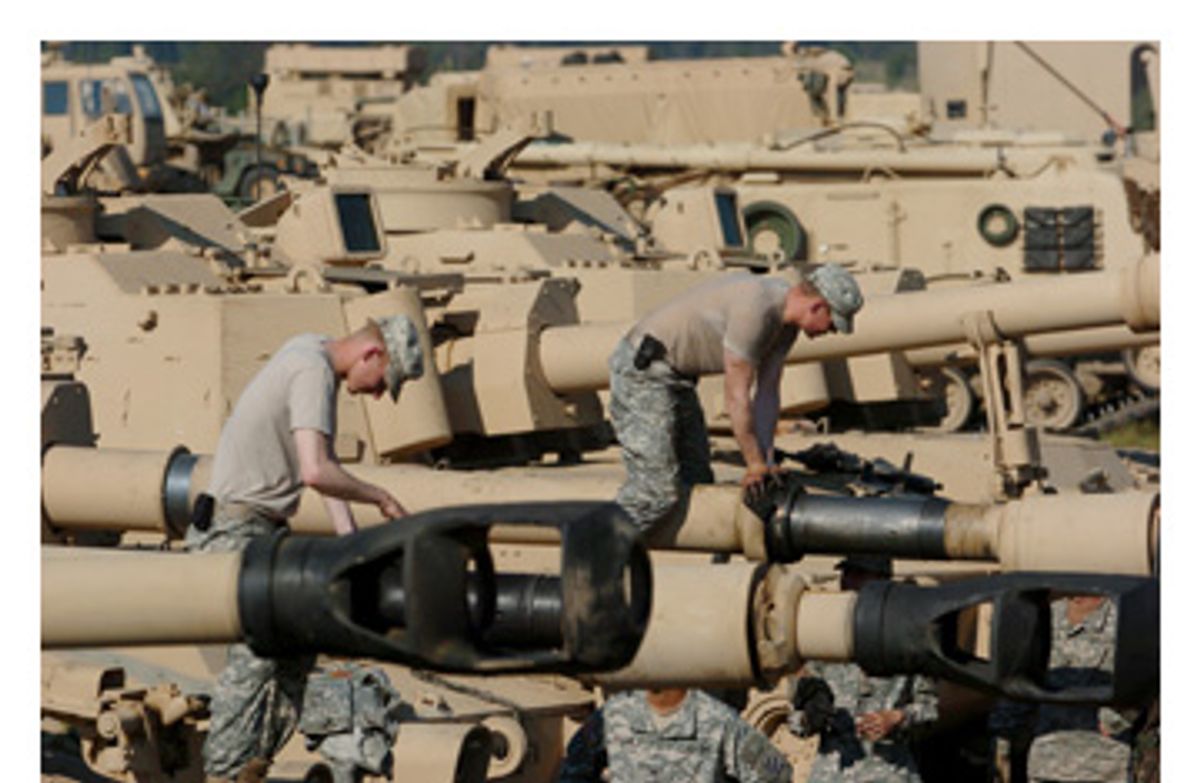 Whatever its ultimate fate, the Iraq Study Group report released Wednesday should have destroyed the spurious notion that flooding Iraq with more U.S. troops might win the war. As the report makes clear, a major influx of U.S. combat brigades into Iraq is somewhere between totally unrealistic and completely impossible.

In interviews with Salon, experts who served on the study group's "working groups" explained why: The military is running out of troops and equipment. The cold, hard facts about military readiness and a 1.4 million-strong active-duty force rule out a big increase in the size of the U.S. footprint in Iraq. "We don't have enough is the short answer," said Bruce Hoffman, a terrorism expert at Georgetown University who served on the military and security working group of the bipartisan commission headed by former Secretary of State James Baker and former Democratic Rep. Lee Hamilton. Advocating a big increase in troop levels now is just political theater, Hoffman argued. "This is the beginning of the who-lost-Iraq debate," he explained. "No one wants to be a charter member of the club."

Even though the new report articulates a dark picture of U.S. readiness, some politicians, including leading Republican Sens. John McCain of Arizona and Lindsey Graham of South Carolina, continue to argue that a significant increase in troops in Iraq is needed to save the country from sinking into the abyss.

Some advisors to the study group expressed considerable frustration that the White House never lifted a finger to prevent the predictable degradation in the readiness of U.S. ground forces, now painfully apparent. Among other things, the White House could have worked early on to greatly increase the size of the Army and Marine Corps. "We've been whistling by the graveyard without doing anything to solve this problem," said Michael Eisenstadt, a study group advisor from the Washington Institute for Near East Policy.

Paul Hughes, another advisor to the Iraq Study Group and a senior program officer at the United States Institute of Peace, noted with disdain how the White House basically ignored the impact the pace of war has had on U.S. ground forces. "What the debate has been lacking is an honest assessment of American military power," Hughes said.

The Iraq Study Group did consider whether a major increase in the number of U.S. troops in Iraq -- perhaps by as much as 100,000 or 200,000 troops -- might help. But the panel explicitly ruled out a large, continual boost in U.S. forces. "America's military capacity is stretched thin: we do not have the troops or equipment to make a substantial, sustained increase in our troop presence," the group found.

That echoes the sentiments of numerous retired military officers who have long argued that the wars in Iraq and Afghanistan are unsustainable even at the current pace. "Unless things start to improve, we will start to see a serious problem in six to nine months," Bernard E. Trainor, a retired Marine Corps three-star general and a former deputy chief of staff under Ronald Reagan, told Salon in April 2005.

The new Baker Commission report suggests that serious problems have already arrived. "U.S. military forces, especially our ground forces, have been stretched nearly to the breaking point by repeated deployments in Iraq," it says. Second and third combat tours are grinding away at personnel and equipment to the point where now, less than one-third of Army units are "currently at high readiness levels." The proper pace of withdrawal, the panel added, would mean that "all combat brigades not necessary for force protection" could be out of Iraq by the first quarter of 2008.

At a Senate hearing on the Baker-Hamilton report on Thursday, McCain said a call to begin the process of getting out of the war-torn country is a "recipe that will lead to our defeat in Iraq," adding that "there's only one thing worse than an overstressed Army and Marine Corps, and that's a defeated Army and Marine Corps."

Still, McCain admits that additional soldiers are elusive at this point. During the confirmation hearing for incoming Defense Secretary Robert Gates this week, McCain called for more "boots on the ground" in Iraq, but admitted that might be difficult. McCain quickly added that the strain on the military could have been avoided had Washington followed his advice years ago to make the Army bigger. "There were some of us three and a half years ago that said we needed to increase the size of the Army and the Marine Corps," McCain told Gates.

Calling for more troops while knowing they are probably unavailable probably has as much to do with domestic politics as winning the war in Iraq, says Christopher Gelpi, a political science professor at Duke. "I think McCain is trying to be able to say after the fact that, 'Hey, I was trying to win,'" Gelpi explained. He said that even if more troops might win the war, it would probably require reinstating the draft to marshal them -- an idea the White House won't touch. Gelpi speculated that McCain, a top contender for the Republican presidential nomination in 2008, is positioning himself politically for the day when the United States is forced to "withdraw in failure, without calling it that."

Prior to any kind of withdrawal, there is the possibility of a short-term, relatively small increase in the number of U.S. troops in Iraq. The Iraq Study Group said this might be feasible for a limited amount of time as the military mission there pivots toward a near-total focus on training the Iraqi military. Earlier this week, incoming House Intelligence Committee chairman Rep. Silvestre Reyes told Newsweek he would support a troop increase in Iraq. But Reyes' spokeswoman, Kira Maas, clarified to Salon that the congressman was endorsing a limited increase in troops, maybe 20,000, for two to six months.

The military has said that a small, short-term increase is possible, but not much more. U.S. Central Command Commander Gen. John Abizaid told McCain at a Senate hearing Nov. 15: "We can put in 20,000 more Americans tomorrow and achieve a temporary effect. But when you look at the overall American force pool that's available out there, the ability to sustain that commitment is simply not something that we have right now with the size of the Army and the Marine Corps."

House Democrats have been among those scrutinizing the wear and tear to which Abizaid was referring. Perhaps the most complete analysis of the grave situation facing U.S. ground forces was prepared by the Democratic staff on the House Appropriations Committee in September, which found that the "vast majority" of 23 active-duty Army combat units not currently in Iraq at that time were at "the lowest readiness levels." It added that roughly half of all Army units everywhere, including reserve units, "received the lowest readiness rating any fully formed unit can receive." It also said: "Army military readiness rates have declined to levels not seen since the end of the Vietnam war."

That sentiment is now becoming increasingly bipartisan. In a speech at the School of Advanced International Studies at Johns Hopkins University on Thursday night, Nebraska Republican Sen. Chuck Hagel, a veteran of Vietnam like McCain, warned against sending more troops to Iraq. "Our ongoing deployment in Iraq is debilitating our military force structure," Hagel warned. "We are decimating the most powerful fighting force the world has ever known, and we are only beginning to understand the astounding cost and time it will take to rebuild our force structure."