Farewell to a torturer in chief

A former associate of Allende's remembers Pinochet -- and wonders what's in store for the North American enablers who are now under international scrutiny. 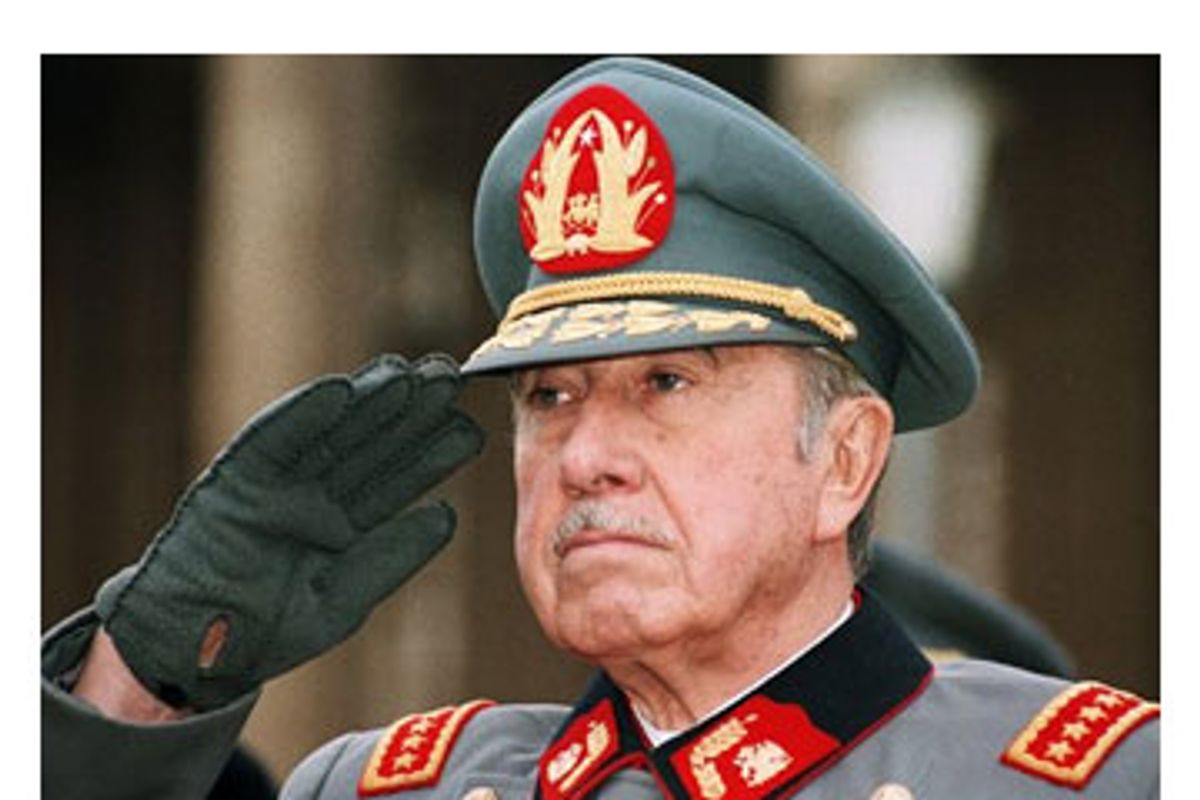 There are many of us with a direct connection to the Chile of the 1970s who have waited a long time for Sunday, for the death of former dictator Gen. Augusto Pinochet. We awaited only the day of his arrest with more anticipation.

I first heard the general's name when, as a young man in late 1971, I was working as a press aide for his predecessor as leader of Chile, Salvador Allende. One day a demonstration led by a chain-swinging right-wing "shock brigade" rampaged through the streets of Santiago, trashing and burning the offices of political parties that supported Allende, the elected socialist president. Allende declared a state of emergency, temporarily putting police power in the hands of the military. And the commander of the Santiago army garrison, Gen. Augusto Pinochet, proceeded to swiftly and unflinchingly sweep the vandals off the streets with tear gas and water cannon. The next day's leftist papers celebrated Pinochet as a stand-up military officer ready to defend the Constitution and the presidency.

Reading that account in the papers, I remembered that only a few weeks before I had met a young radical university student with the same last name. When I went to look up Christian Pinochet again he confirmed that the general was, indeed, his uncle. But be advised, he said, the old man was a "fascist" and this certainly wasn't the last we would hear from him.

The rest, of course, is history. Two years later, on Sept. 11, 1973, just days after he had been promoted to top commander of the army and after personally swearing his loyalty to President Allende, Pinochet seized power in one of the bloodiest coups in Latin American history.

The presidential palace, where I was then working as Allende's translator, was attacked by troops, tanks and British-made jets. Allende killed himself rather than surrender. Heavily armed troops crashed through the poorer neighborhoods, dislodged workers from factories, occupied the universities and drew down a dark cloak of terror on one of the continent's most advanced, civil and polite democracies.

While the more naive thought Pinochet would be a mere transitional figure, that he would soon restore democracy after overthrowing the polarizing Allende administration, the general had completely different plans. First, he consolidated his personal power over the four-man governing junta, then over the entire nation, boasting, "Not a leaf moves without my knowledge."

Those words would come back to haunt him when, after 25 years of absolute impunity, he was arrested in London in 1998. A crusading Spanish magistrate looking into the deaths of Spanish nationals in Chile during Pinochet's dictatorship triggered an international arrest warrant. And from high tea with his pal Maggie Thatcher, Pinochet was transferred into 503 days of British custody. He was ultimately allowed to return home to Santiago, but not before the now discredited and disgraced dictator had been bombarded with accusations and investigations. Half a dozen other nations had joined the clamor for his prosecution on charges of murder and torture. He was forced to take refuge in a claim that he was mentally unfit to stand trial. All of a sudden, the once-omnipotent Pinochet seemingly couldn't remember the details of anything.

No matter. He no longer seemed untouchable. Back home in Chile, the indictments, the bookings, the house arrests continued. He was stripped of immunity from prosecution and buffeted by charges ranging from murder to torture to tax evasion. On three occasions, including last week, when he was hospitalized for the heart attack that would eventually kill him, he evaded going to formal trial by claiming he was too sick. So be it. None of this will alter history's harsh judgment.

His very name, his surname alone, has entered our common lexicon as a stand-alone synonym for all the brutal inhumanity that comes with arbitrary and repressive military dictatorship. In some ways, it has been an unusually quick historical transition for Pinochet. Just a few decades ago, in the Reagan-Thatcher era, he was celebrated as the sometimes excessively tough but equally determined prophet of the free market. With economic populists, leftists and even socialists now in power in virtually every Latin American capital, who even remembers those days?

What is remembered, however, is the sheer horror. The soulless barbarity imposed by the Pinochet regime traumatized the Chilean nation in a way that it is still struggling to assimilate. There's an old political slogan in Spanish: "The Color of Blood Is Never Forgotten." Indeed, 33 years after his seizure of power, Pinochet's human rights record remains as politically volatile as ever. It took a post-Pinochet civilian government almost a decade before it was literally forced into prosecuting him and a few other implicated officials. Only relentless pressure from surviving relatives, a small corps of human rights attorneys and a sprinkling of principled magistrates kept the unfinished investigations alive. That, and the unfathomable, lingering specter of the innocent being swept up by hooded soldiers in the middle of the night, tortured with electrical shock, waterboarded, submitted to faux executions, then shot, disemboweled and either buried in secret graves or thrown into the ocean from helicopters.

That's a legacy from which you never escape. Those are ghosts that are impossible to exorcise. They will stalk you, torment you and seek justice and vengeance whether you're shopping at Harrods, having tea with Thatcher or trying to convalesce in a hospital bed after a crippling, and ultimately fatal, heart attack. Having been afforded no mercy, they know no mercy.

After his arrest in London, Gen. Pinochet could no longer safely travel outside of Chile. Warrants for his capture loomed in almost every civilized nation on earth. The same traps awaited -- and still await -- some of his lesser-known collaborators. Even the mighty Henry Kissinger now travels only on a strictly scrutinized itinerary thanks to judicial inquiries stemming from his own collaboration with the once-butcherous regimes in Santiago and Buenos Aires, Argentina.

Pinochet's precipitous slide from vaunted political hero to death as a disgraced and wanted war criminal sends a somber message to those who today ride high on their arrogance and hubris. The color of blood is not forgotten. Neither are the curdling images of wired-up prisoners in hoods, nor the chilling nightmares of being tied to a plank and being drowned in the name of freedom.

Marc Cooper is a Visiting Professor of Journalism at the USC Annenberg School for Communication. His work as translator for Salvador Allende is detailed in his book, "Pinochet and Me: A Chilean Anti-Memoir." His website is www.marccooper.com.