In an interview with Marisha Pessl and an excerpt from her book, we meet Blue van Meer, this year's most appealing teen. 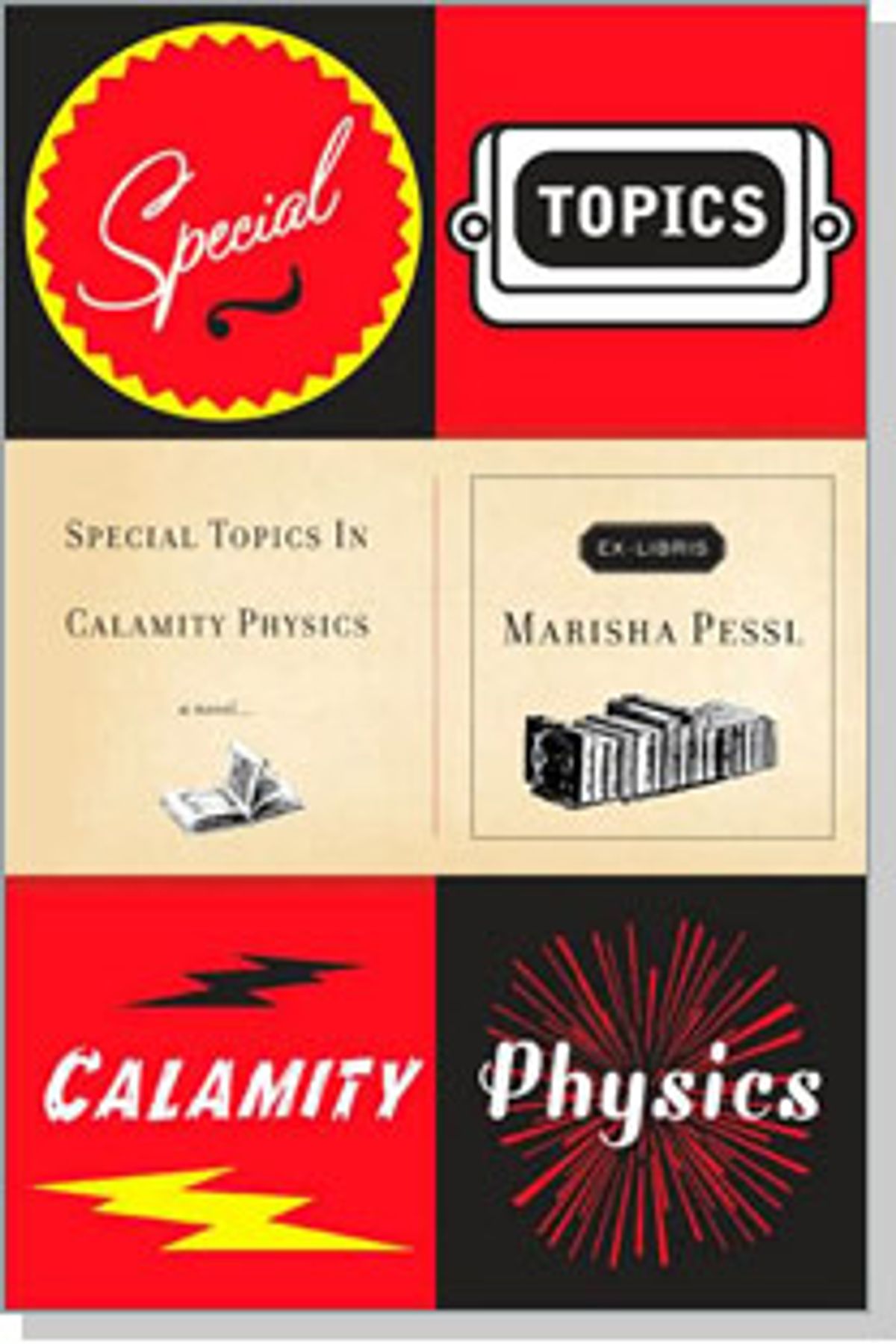 Each chapter in "Special Topics" bears the name of a great work in the Western canon. Did you actually read all of those books and plays and poems -- "Pygmalion," "Things Fall Apart," "Women in Love"? What prompted you to organize the book that way?

I did read them -- some were assigned in high school, others were for fun, but most I read as a literature major in college. After I'd written a first draft of "Special Topics," I wanted to find an inventive way Blue would organize the many parts of her story. Throughout the book, particularly at the outset, she interprets the world exclusively through the hundreds of books she's read, so it seemed a natural extension of her character to organize the story in this way.

You managed to write an ambitious, exciting adult novel about a teenager, which isn't an easy thing to pull off. What do you think it is about your heroine, Blue van Meer, that makes her so appealing to grown-ups?

I can't speak for all grown-ups, but I suspect there's an innate, cross-generational appeal in watching funny outcasts and shy loners like Blue bungle their way through the world. Or maybe it's simply that everyone has an inner nerd. The other night at one of my readings, someone informed me that Blue was part of a burgeoning trend of American geeks, that there's a new wave of cool dorks and techies in films and novels and it's truly hip now to be square. He referenced "Napoleon Dynamite," but I have to investigate this exciting phenomenon further.

I don't want to give anything away, but the book has something to do with secret societies and '60s counterculture. Were those things that you have always been interested in, or did they just come in handy for the book?

In college I studied '60s and '70s radicalism, student activism, forms of political violence, groups like the Weathermen, the Black Panthers, the Symbionese Liberation Army, the New Left. Part of this interest was because I'm a history buff, but I was also fascinated by the juxtaposition between '60s student approaches to politics and the mindset of my own generation. Talk about marching, staging sit-ins today, most kids would laugh and tell you to hand over the remote; they don't want to miss the latest episode of "The Real World: Tampa." But a mere 40 years ago, students took these things seriously, saw protest as a viable means of changing civic and international policies. The 1999 arrest of Sara Jane Olson definitely inspired my plot. I also read a lot of Noam Chomsky. After a night reading Noam -- secret societies, coverups, conspiracies, grand plots -- it doesn't seem so far-fetched.

I read that before "Calamity Physics," you'd written two novels that didn't go anywhere. Were they mysteries as well? How did you decide to work in that form?

They did go somewhere, actually, to the very back of my closet. No, I've been asked this question a lot because "mystery" seems to be a tawdry word in literary circles. But I tend to disagree. I think all great books are mysteries and all great characters sleuths. I don't mean mystery in classic terms of the genre, but in the sense of secrets and unsolved problems; we, as readers, want to be surprised, we don't want to know where we're going. And we tend to root for characters who put themselves on the line and search for something, whether it's a shady, murderous character or some sort of larger truth, like personal freedom or a deeper understanding of the world.

Had you read Donna Tartt's "The Secret History" before you worked on "Calamity Physics"? (I had to ask.) If you did, did you like it?

I read it in high school and thought it was fantastic.

What are you reading now?

"The Broken Estate" by James Wood.

This never meant much to me, until I became friends with them.

If the Aztecs regarded Hernando and his henchmen with fright, then the entire St. Gallway student body (more than a few teachers too) regarded Charles, Jade, Lu, Milton and Nigel with awe and outright panic.

They had a name, as all choice societies do. Bluebloods.

And daily, hourly (possibly even minutely) that posh little word was whispered and whined over in envy and agitation in every classroom and corridor, every lab and locker room.

"The Bluebloods catwalked into the Scratch this morning," said Donnamara Chase, a girl who sat two seats away from me in AP English. "They stood in the corner and went, 'Ew,' to everyone who walked by to the point that Sam Christenson -- you know that mannish sophomore girl? Well, she actually broke down at the beginning of Chemistry. They had to cart her off to the Infirmary and all she'd say was that they made fun of her shoes. She was wearing Aerosole pink suede penny loafers in a size nine and a half. Which isn't even that bad."

Obviously at Coventry Academy, at Greenside Junior High, there'd been the popular ones, the VIPs who cruised the halls like an arcade of limousines and invented their own tongue in order to intimidate like fierce Zaxoto tribesmen in the Côte d'Ivoire (at Braden Country I was a "mondo nuglo," whatever that meant), but the asthma-inducing mystique of the Bluebloods was unparalleled. I think it was due in part to their diva foxiness (Charles and Jade were the Gary Cooper and Grace Kelly of our time), their for-real fabulousity (Nigel was so tiny he was trendy, Milton so vast he was vogue), their trippy confidence (there goes Lu proudly across the Commons, her dress on inside-out), but also, most singularly, because of certain tabloidal rumors about them, a lil' somethin' somethin' and Hannah Schneider. Hannah kept a surprisingly low profile; she taught only the one class, Intro to Film, in a squat building at the edge of campus called Loomis, famous for laundering credit fillers like Intro to the Fashion Business and Woodshop. And as Mae West is quoted in the out-of-print "Are You Just Happy to See Me" (Paulson, 1962): "Y'ain't nobody 'til you've had a sex scandal."

"I don't get how she got a job at this school," said Eliaya. "She's three sandwiches short of a picnic."

"Who're you talking about?" asked Georgia absentmindedly as she pored over colored photos in a magazine, VIP Weekly, her tongue sticking out the side of her mouth.

"Duh. Hannah Schneider." Eliaya tipped her chair backward and drummed her fat fingers on the cover of the textbook on her lap, "An Illustrated History of Cinema" (Jenoah, 2002 ed.). (I could only assume she was enrolled in Hannah's class.) "She totally wasn't prepared today. She disappeared for fifteen minutes 'cause she couldn't find the DVD we were supposed to watch. We were supposed to watch 'The Tramp,' but she comes back with friggin' 'Apocalypse Now,' which Mom and Dad would go mental over -- the movie's three hours of harlotry. But Hannah was like planetary -- didn't have a clue. She puts it in, doesn't even think about the rating. So we see the first twenty minutes and the bell rings, and then that kid Jamie Century, he asks her when we're gonna see the rest and she says tomorrow. That she's changing the syllabus around a little. I'll bet by the end of the year we're watching 'Debbie Does Dallas.' It was ghetto."

"She's tweaked. Wouldn't be shocked if she went Klebold."

Georgia sighed. "Well, everyone and their grandmother knows she's still banging Charles after all these years -- "

Georgia leaned closer to her sister. (I had to be very still to hear what she said.) "You really think the Bluebloods go all Caligula on the weekends? I'm not sure if I believe Cindy Willard."

"Oh, right," said Georgia, nodding, then breaking into toothy laughter, a sound like a wooden stool being dragged across a floor. "That's how they keep their gene pool from getting contaminated."

Unfortunately, as Dad pointed out, there's often a seed of Truth within the Flash and Trash (he himself wasn't above perusing a few supermarket tabloids while standing in line: "'Plastic Surgery Smash-ups of the Stars' -- there's something rather compelling about that headline.") and I'll admit, ever since I saw Hannah and Charles together in the courtyard on the first day of school, I suspected there was something clammy going on between them (though I'd decided, after a Sunday or two, while Charles was almost certainly infatuated with Hannah, her attitude toward him was pleasantly platonic). And though I was in the dark regarding the Bluebloods' weekend activities (and would be until the middle of October) I did know they were quite preoccupied with maintaining the superiority of their line.

I, of course, was the one contaminating it.

My inclusion into their Magic Circle was as painless as the invasion of Normandy. Sure, we had faces eventually, but for the first month or so -- September, the very beginning of October -- though I saw them all the time peacocking through campus, and acted as hushed, horrified journalist to the anxieties they inspired ("If I ever see Jade injured, facedown in the street, homeless, riddled with leprosy -- I'll do humanity a favor and run her over," pledged Beth Price in my AP English class), I only ever hung out with them at Hannah's.

And obviously, during those first few evenings, the scenario was more than a little humiliating. Obviously it made me feel like a dumpy bachelorette on a reality show called In-sta-love no one wanted to take for drinks and I sure as hell could forget about dinner. I'd sit on Hannah's shabby chaise lounge with one of her dogs, pretending to be transfixed by my AP Art History homework while the five of them talked in hushed voices about how "hard-core," how "juiced," they'd been on Friday at mysterious places they'd nicknamed "The Purple" and "The Blind," and when Hannah emerged from the kitchen, immediately they'd hurl me greasy little sardine-smiles. Milton would blink, aw-shucks his knee and say, "So how's it goin', Blue? You're awful quiet over there." "She's shy," Nigel would observe, deadpan. Or Jade, who without fail dressed like a famous person working the red carpet at Cannes: "I love your shirt. I want one. You'll have to tell me where you got it." Charles smiled like a talk show host with poor Nielsen ratings and Lu never said a word. Whenever my name was mentioned, she examined her feet.