The label sounds nice but doesn't guarantee those expensive soaps and lotions were created without being tested on animals. 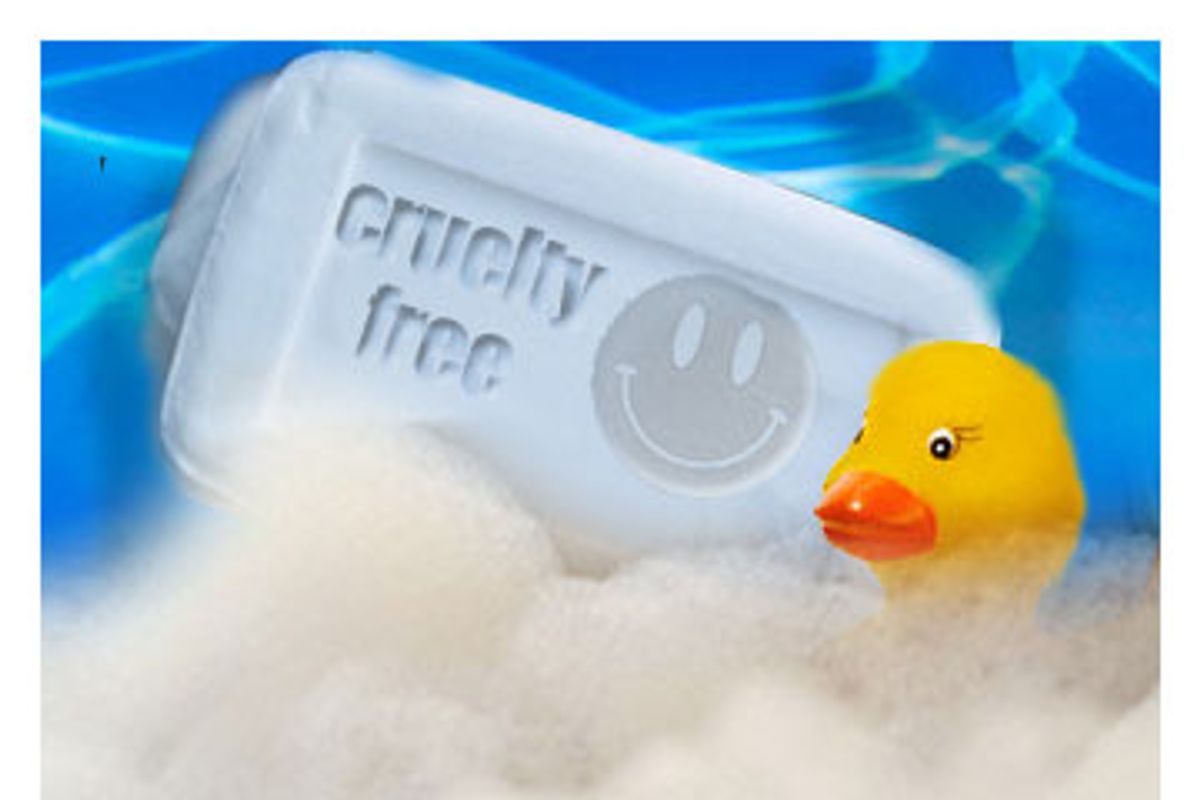 These days, I want my soap to do more than keep me clean. I like buying a bar that has oatmeal in it, that's touted as organic and -- even better -- "cruelty free." Until recently I hadn't really considered what that claim meant, but I liked the idea that I was paying for something "crafted with intention," something made without having inflicted cruelty on animals. The products that line the aisles of Wild Oats and Whole Foods in my hometown of Portland, Ore., aren't cheap: a 4-ounce bar of soap recently cost me $4.99 (on sale!). But we buy beauty products to nurture ourselves, and somehow, if the company I'm paying doesn't test its soap on animals, I feel less guilty about spending five dollars for a bar of it.

I'm not alone: 60 percent of consumers agree that they look for beauty products that have a "cruelty free" label on them, according to a recent online poll conducted by the Benchmarking Group, a national consumer research firm for the beauty industry. Like me, about half of the poll participants assumed that the federal government monitored those products to ensure they weren't tested on animals. Turns out it's an assumption that will get you about as far as believing that the right face cream can change your skin and your entire dating life.

In fact, the Food and Drug Administration, the federal agency that regulates the cosmetics industry, has set no legal definition for what the term "cruelty free" means and has given no guidelines for the industry to follow. The organic-food industry was regulated by third-party companies for years prior to federal oversight, but there is no independent group that certifies, monitors or regulates the labeling of products as "not animal tested," let alone as "natural" or "hypo-allergenic."

"'Cruelty free' is a vague claim, and it's not easy to back up," says Urvashi Rangan, a senior scientist with Consumer Reports. "People shouldn't mistake those kind of claims for meaning that those ingredients were never tested on animals."

"Cruelty free" can represent an entire palette of meaning. It may mean that the company never tested any of the product's ingredients on animals, or it could simply indicate that the final product wasn't tested on animals. It could also mean that the company itself didn't test its product on animals but did pay a third party to do its dirty work. Ultimately the claim can be so diluted that some companies refuse to use it.

"It's of concern to us that other companies are only telling consumers part of the story," says Tim Long, a toxicologist and the manager of scientific communications for Proctor & Gamble, the owner of more than 100 brands, including Cover Girl, Max Factor, Herbal Essences and Olay. "Consumers are put in a tough spot; they don't know who to believe. The FDA has never been clear on these issues. We believe that at some point, most ingredients have been tested on animals, even if it was in the past, so for any company to claim that its ingredients have never been tested on animals is probably a lie and is misleading at best."

Of course, it behooves Long to belittle the "cruelty free" label, given that Proctor & Gamble still conducts animal tests on about 1 percent of its products -- or so Long says. He sounds like a nice, reasonable person. But with no independent or government auditor to verify his claim, it's impossible to take him at his word.

PETA spokesperson Ann Marie Dori says companies don't lie, because if they did, and it was discovered they tested on animals, the companies would be staring at a public relations nightmare. But that's about as reassuring as Long's promises. The PETA list, made up of signatories to a voluntary statement, depends on an honor system -- and I'm not convinced that honor and profits are ingredients in the same cocktail.

According to the FDA, the federal government doesn't have the resources to put the "cruelty free" label to the test because it is already consumed with the job of ensuring that products are safe. In fact, recent budget cuts have reduced the number of FDA compliance officers. What's more, the FDA often relies on a review board supported by the Cosmetic, Toiletry and Fragrance Association, the industry's own trade group, to inspect the ingredients in beauty products. In any event, there's currently no independent organization to provide consumers with quantifiable proof that products aren't tested on animals.

So for now the onus of determining whether a "cruelty free" label is valid falls on consumers. Well, I for one am unlikely to start poring through the International Cosmetic Dictionary and Handbook at my local library to learn more about the ingredients in my beauty products. (This was honestly recommended by an article on the FDA's Web site.) Instead, maybe I'll start buying regular soap and give the extra money to the homeless guy standing in front of Whole Foods.