Protaganist Liberty Fish's mother, Roxana, brings him into the world. 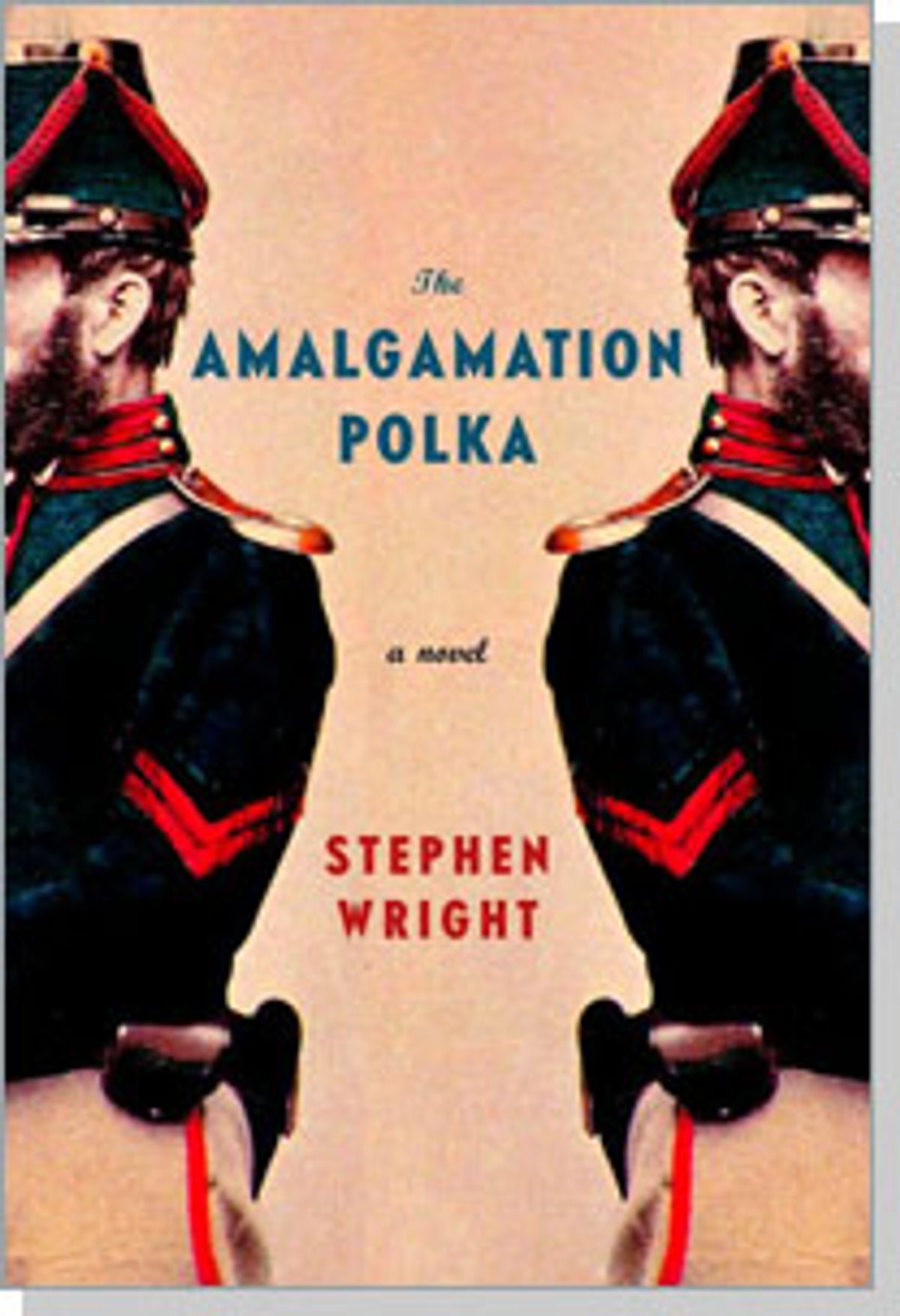 The bearded ladies were dancing in the mud. Outsized country feet that just wouldn't keep still, strutting and reeling all along that slippery stretch of flooded road. Yellow paste clung to the hems of their gowns, flecked sunburnt arms and whiskery cheeks, collected in thick earthen coins upon the lacy ruffles of their modest chests like a hero's worth of medals artlessly arranged. A cold rain fell and continued to fall over the lost hills, the yet smoking fields, the rude, misshapen trees where light -- vague and uncertain -- struggled to furnish the day with the grainy quality of a fogged daguerreotype. And at the center of this dripping stillness these loud animated women without origin or explanation, refugees from a traveling circus perhaps, abandoned out of forgetfulness or deceit or simple spite, the improvised conclusion to some sorry affair of outrage and betrayal, and as they danced, they sang and reveled in the rain, porcelain pitchers of ripe applejack passing freely from hand to unwashed hand, the echo of their song sounding harshly across that desolate country:

On a rise back of the road stood a tall white frame house with long white curtains flung twisted and sodden from the open windows. A solitary blackbird perched atop the brick chimney, its beaded prismatic head jerking mechanically about. Several emaciated hogs rooted with audible vigor among the stumps of broken furniture, the puddles of bright clothing littering the trampled yard. From out the shadowed doorway flew an enameled jewelry box, bouncing once, twice, and off into the weeds. Followed quickly by an English plate, a soiled pair of ripped pantaloons, a clanging case clock, an oval looking glass that vanished upon an upended table leg in a burst of twinkling confetti -- the house methodically emptying itself out. A pregnant sow shifted its spotted flanks, then resumed gnawing at the gilded frame of a painting in the grand style of Washington and Cornwallis at Yorktown. A bearded lady appeared at the door bearing before her a magnificent rosewood chair, the ruby red brocade of its seat and arms mounting up in lurid flame. The hurled chair landed upright in the mud where it continued to burn, to reduce itself to skeletal blackness, to pure idea. The bearded lady watched, haloed in the fires now leaping madly behind her. Curds of gray smoke were crowding out from under the cedar shakes. The house began to make a great whooshing sound. Flakes of wet ash blew down out of an opal sky.

The figure was already running when the bearded ladies glimpsed it, rushing slantwise down the clay slope as if materialized in mid-stride out of some adjacent realm of unendurable horror and perpetual flight.

"It's a nigger!" cried one of the ladies.

She was young and barefoot and clothed in woolen rags. The clear terror in her touched even them standing there astounded for once in their ruined fashions and waterlogged boots. They watched agape this sudden apparition go bounding up the road like a wild hare and as the size of her steadily diminished in the misting distance an unaccountable rage grew large among them. Without word or gesture they moved off as one in raucous pursuit. It was a remarkable sight. Splashing and howling, jostling for position like whipped racing ponies, all bobbing beards and bonnets, stumbling on petticoats, sliding belly down into the mire, they presented a spectacle of hermaphroditic frenzy such as few could imagine. In a moment they were strung out wheezing in the muck. All but one. Audacious in a poke bonnet and bombazine dress, she rapidly outdistanced the rest, she hounded her quarry, she ran like a mother possessed, in a fit of chastisement, hard on the heels of an impudent daughter. Over the near hill and down, up the far hill and gone.

When at last the others found them, they were fallen and half-buried in the melting loam of an eroded embankment, their partially clad bodies so slathered with mud as to be almost unrecognizable, ill-formed creatures who had failed some evolutionary test. The bearded lady was settled in between the girl's thin bare shanks and well into her work, the bonnet wadded fiercely into the girl's bleeding mouth, a crude brand of the letter D gleaming on the lady's exposed cheek. The girl's eyes were closed. She might have been unconscious. The stragglers stood about in an uneasy huddle, turning to study now and again the dreary emptiness of the road, the earth, the sky, waiting like patient cattle in the rain, the tattered remnants of contemporary finery hiked to their armpits, buttons undone on the filthy breeches beneath, waiting politely in turn, their pink manhood carelessly exposed. Someone belched; another laughed. Soon the last of the pale light would draw off into the pine hills, shielding from hostile eyes the occupations of these costumed shapes in a starless obscurity, in the cloaked freedom of the night.

There was a gorilla in the White House and a long-tailed mulatto presiding over the Senate chamber and the dreams of the Republic were dark and troubling.

He was born in the fall of the time at the end of time. The signs were plain for all with an eye to read: the noonday passage the previous spring of a great comet -- "the marvel of the age!" -- the swift echelons of croaking blackbirds flocking north for the winter, the collapse of the revival tent up in Rochester where, miraculously, not a single soul was harmed. Cows walked backward through the meadows; well water turned overnight into vinegar. Surely the advent of eternity was at hand. The vine was about to be reaped.

At dusk on the evening of October 22, 1844 (the date determined by the divine computations of an ex-sheriff and self-taught biblical scholar), the ascension-robed faithful gathered anxiously in churches and meetinghouses, along rooftops, the branches of trees and out upon high desolate hillsides -- the nearer to glory -- hymns and prayers keeping them through the final chill hours of that long last day until, instead of the Bridegroom, there appeared in the eastern sky the tentative kindling of just another dawn, proof that, for now, time would have no end, the body no release, and outside Delphi, New York, the disappointed crowd, waistcoat watches ticking steadfastly on, descended the knoll out of Briarwood Cemetery past the leafless, unscorched elms, the cold, unharrowed graves and into the welcoming arms of no company of saints but a taunting, unredeemed mob from town brandishing brickbats and stones.

So the trials of America were not to be so speedily concluded. Hours more must be drowned in sin, the sun darkened to a seal of pitch, before God would deliver this errant nation from the wickedness of history.

His mother, Roxana, did not expect to survive the occasion, the birthing chair having served all too often as a makeshift gallows for women of the family, carrying off Grammy Bibb, several faceless cousins, a favorite aunt with dimples deep enough for planting and her eldest sister, Aurore, the blonde darling of Stono County, who stoically kneaded at her bedclothes for three frightful days before producing a male nonesuch that Father hastily wrapped in red flannel and buried in an unmarked hole behind the smokehouse on the morning she died, crying out at the end in a mystic guttural tongue none understood or recognized. Passage to that Good Land seemed to be neither fair nor fleet. The moment Roxana realized she was growing a baby she understood immediately what she must do: prepare herself like a warrior on the eve of battle. She had read "The Iliad" in the original Greek at the age of sixteen; she knew what was required.

The annunciatory instant, as clear to her now as present vision, occurred as she stood defiantly in the pulpit of the Pleasance Street Methodist Church in Utica, struggling to lift her modest voice above the clanging, the braying, the whistling, the clapping of the protesting horde outside. She had just finished reciting the Declaration of Independence -- amazing the ardor those few simple words could still arouse almost seventy years later -- when a boyish, moon-faced man in a rusty black coat climbed atop a pew and, shouting above the clamor of fists drumming angrily upon the walls, inquired of Roxana whether he could approach and feel her chin for evidence of a beard. A dozen men rose in outraged objection, and as Roxana waited patiently for the commotion to subside -- a small, still figure at the eye of her nation's storm -- she felt an unmistakable flutter of ghostly delicacy, a kind of spiritual hiccough, pass hastily through her frame, and at once she knew: a skull had begun to swell between her hips.

"Nonsense," declared her sister-in-law, Aroline. "No one's departing this household just yet, as long as I have any say in the matter."

"But I want this child," Roxana said in her soft drawl that always struck Aroline's northern ears as the sound a cloud might make if it could talk.

"And so you shall, my dear, and many more besides."

The thought depleted Roxana. Did she truly want even this one? She fell into a prolonged and uncharacteristic period of distraction. Days came and went, but she was no longer a passenger. The most trivial tasks eluded her. The careless placement of a spoon or cup on the kitchen table, a particular patch of sunstruck wallpaper, acquired a mesmeric fascination. She could lose herself for hours (and go she knew not where) in the view from her bedroom window, the barren hills lying motionless in the bleak February light like a corpse sprawled on its side. A single spider dangling on a single thread from a peeling porch beam was the saddest sight in the world. She kept misplacing her heavy ring of house keys. The pauses in her evening conversations with Aroline grew so lengthy she'd forget she was even speaking to anyone. At night, during those rare intervals when sleep actually came, she'd persist in dreaming that she was awake and rise in the morning achy and exhausted, a dark and haunted look hovering prominently about her solemn brown eyes.

Aroline did what Aroline did best: she worried. She left copies of The Journal of Health and Longevity or The Cold Water Journal or any of the sundry ultraist periodicals she subscribed to lying strategically around the house, pages opened to pertinent passages. Ever fashion's weather vane, she had already sampled a full course of the latest faiths, philosophies and fads, including vegetarianism, hydrotherapy, phrenology, perfectionism and harmonialism. She had been among the expectant number huddled atop the cemetery knoll, her presence testifying at least to the possibility, if not the hope, that the prophet's words were more than mere animal sounds but actual reverberations of gospel thunder, just as she was convinced there were embers of revealed truth in every belief fervently held. Fervency was the key, the sign incontrovertible of spirit leaking in through the cracks of this darkling world.

Stephen Wright was educated at the U.S. Army Intelligence School and the Iowa Writers Workshop. He has taught at Princeton University, Brown University, and, most recently, The New School. He lives in New York City.