From Russia with lies

Beneath a deepening web of conspiracy theories rests the enigma of poisoned ex-spy Alexander Litvinenko and some dark truths about Putin's regime. 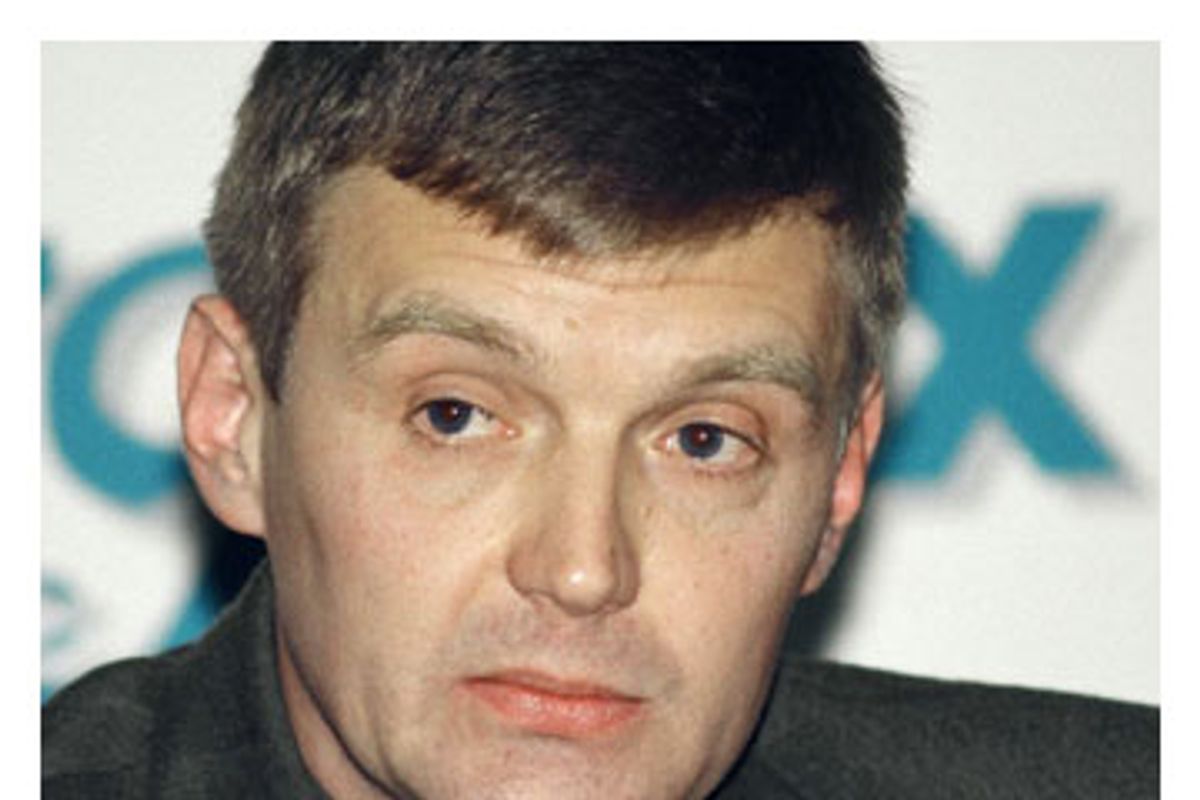 Alexander Litvinenko loved conspiracy theories. In exile in London, where he fled from Russia in 2000, Litvinenko would tell whoever would listen that his former employers at the KGB were involved in all kinds of cloak-and-dagger horrors.

The bombing of four Russian apartment buildings in 1999 that left hundreds dead; the Moscow theater siege that killed 129 people; the 2004 explosion on the Moscow metro that killed dozens of commuters -- all the work of one of the KGB's post-Soviet successors, the Federal Security Service (FSB), according to Litvinenko. He once contended that Osama bin Laden's right-hand man, Ayman al-Zawahiri, was trained by the FSB in 1998 before mysteriously being released to organize attacks against the United States. Even last year's controversy over the publication in a Danish newspaper of editorial cartoons depicting the Islamic prophet Mohammed, he claimed, was orchestrated by the FSB to punish Denmark for its refusal to extradite Chechen separatists.

None of it could ever be proved, of course, but Litvinenko knew that the secret to good conspiracy theories is that they feed on the absence of proof. And the more outlandish the claim, the harder it may be to disprove.

So it is with the circumstances of Litvinenko's own death on Nov. 23 from radiation poisoning. From London to Moscow to Hamburg, Litvinenko's killing has unleashed a storm of speculation that has grabbed the world's attention for weeks and prompted talk of a new Cold War between Russia and the West. Political analysts here say that President Vladimir Putin's increasingly authoritarian rule has undermined his credibility in denying any Kremlin involvement. Human rights activists, meanwhile, are charging that the flurry of Western media coverage has gotten Litvinenko's profile largely wrong.

Nearly every day brings a new twist in the saga and another strand for the tangled web of conspiracy theories. A key witness in the case, Moscow businessman and former KGB agent Andrei Lugovoi, claimed Wednesday that Litvinenko was poisoned more than two weeks earlier than is widely believed. Lugovoi told the tabloid Moskovsky Komsomolets that he and Litvinenko were contaminated on Oct. 16 during a visit to a London-based security firm, where traces of radiation were later found by British police. The two did not visit the firm again on Nov. 1, the date that Litvinenko is known to have fallen ill, so they could not have been exposed to the radiation on that day, said Lugovoi, who is undergoing radiation tests himself in a Moscow clinic.

Another of Litvinenko's associates, Dmitry Kovtun, also claimed Wednesday that he was contaminated with radiation during meetings with Litvinenko and Lugovoi in London back in mid-October. German police say they found traces of radiation in various locations visited by Kovtun before he traveled to London on Nov. 1. Both men have been interviewed by British detectives in Moscow and have denied any involvement in Litvinenko's poisoning.

Litvinenko conveyed that he had no doubt who was behind his poisoning. In a deathbed statement, he claimed his killing had been ordered by Putin, himself a former head of the FSB. "You may succeed in silencing one man, but the howl of protest from around the world, Mr. Putin, will reverberate in your ears for the rest of your life. May God forgive you for what you have done," the statement read.

Russian officials have scornfully denied any involvement, pointing out that there is not a shred of evidence connecting Litvinenko's death to the Kremlin. Still, the accusation alone was enough to prompt widespread condemnation of Putin in the West. "The fatal poisoning of Alexander Litvinenko in London, along with all the other suspicious murders and attempted murders of Kremlin critics in recent months, poses fundamental questions about Russia, and how the West should treat it," began a New York Times editorial on Dec. 4.

"In the past couple of years there's been a growing sense in the West that Russian democracy is in decline," said Masha Lipman, a political analyst with the Moscow Carnegie Center. "Russia's image, which wasn't great even prior to this, is getting worse."

Why would Putin want Litvinenko dead? His supporters say Litvinenko was a thorn in the Kremlin's side -- a dissident whistleblower and determined human-rights campaigner.

But in Moscow, human-rights campaigners have been dismayed in recent weeks to see how Litvinenko has been portrayed in many Western media reports. While he was no doubt a critic of Putin, he was a marginal one whose motives and methods were never entirely clear.

"Of course it's a pity that he has died, but the idea that Litvinenko was a dissident and a human-rights campaigner is ludicrous," said Lyudmila Alexeyeva, the doyen of human-rights activists in Russia and head of the Moscow Helsinki Group.

Litvinenko's supporters have also attempted to link his death with the killing of Anna Politkovskaya, a crusading Russian journalist and prominent Putin critic. Politkovskaya was gunned down outside her Moscow apartment in October as she was preparing to publish another in a long series of articles outlining human-rights abuses by pro-Kremlin forces in Chechnya. After his poisoning, Litvinenko claimed he had been investigating her murder and had evidence linking her death to Putin.

Many long-standing critics of Putin doubt he would have personally ordered Litvinenko's killing. "It just doesn't make sense. There was no reason to kill him," said Boris Kagarlitsky, a Soviet-era dissident who is now a political analyst in Moscow. As subsequent events have shown, Litvinenko has been able to inflict far more damage to the Kremlin's standing in death than he ever did in life.

Still, Kagarlitsky conceded it is possible that rogue elements in Russia's security services, which have grown increasingly influential under Putin, were behind the poisoning. "Litvinenko was seen as the worst kind of traitor in those circles," he said. As Putin's final term approaches its end in 2008, his control over various factions in the Kremlin is wavering, Kagarlitsky said. Under less constraint, forces from the security services -- known as the Siloviki, from the Russian word for strength -- may be feeling freer to flex their muscle and settle old scores. Or, following the spiral of conspiracy theory even further, perhaps a different faction could have ordered Litvinenko's killing in order to discredit and weaken the Siloviki.

Beyond the "rogue elements" theories, pro-Kremlin media outlets in Russia have been pushing a slew of alternative theories, most of them connected with the murky world of London's Russian expatriate community. Much to the Kremlin's frustration, London has become the preferred home of prominent Russian exiles since Putin's rise to power. Among them are the business tycoon Boris Berezovksy, a sponsor of Litvinenko's, and Akhmed Zakayev, a spokesman for Chechnya's rebel separatists who was Litvinenko's next-door neighbor.

Many in Moscow have pointed the finger at Berezovsky. Known as the "godfather of the Kremlin" under former President Boris Yeltsin, Berezovsky supported Putin during his first run for the presidency, but later turned against him. Berezovksy's critics say the oligarch rebelled after Putin refused to be his puppet and that Berezovsky spends much of his vast fortune on scheming against his former ally.

"This is all part of a plot by Berezovsky to damage President Putin and ruin Russia's reputation internationally," a former KGB agent in Moscow said in a phone interview this week, speaking on condition of anonymity.

Berezovsky has denied any involvement, and there is no proof linking him to the poisoning.

There are other theories swirling inside Russia, some of them particularly outlandish. Some here have speculated that Litvinenko may have poisoned himself in order to place the blame on Putin. Others say that he was involved in smuggling radioactive materials. Russian television has floated the theory that Litvinenko may have been exposed to deadly radiation while working in an underground laboratory with Chechen rebels in London to develop a nuclear "dirty bomb" -- which, of course, plays well for the Kremlin's own proclaimed war against terrorists.

After initially rushing to condemn Putin for the killing, many in London have adopted a more careful tone in recent days. But regardless of who killed Litvinenko, Putin's critics in Moscow say he only has himself to blame if many believe he is responsible.

Since coming to power in 2000, Putin has overseen the steady deterioration of democratic rights and civil liberties in Russia. By rewriting laws, his government has canceled direct elections for regional governors and turned the Russian Parliament into a rubber stamp. All of the country's national television networks and prominent newspapers have come under the control of the Kremlin or of Kremlin-friendly businessmen. Government critics have been persecuted, jailed and, in some cases, killed. The murders of 13 journalists, including Politkovskaya, remain unsolved. A new law, decried in the West, has imposed tight controls on civic groups and other nongovernmental organizations. In Chechnya, activists continue to document widespread cases of torture, kidnappings and murder by pro-Moscow forces.

"The fact that so many people in the West were ready to accept theories [of Kremlin involvement] that are unsubstantiated at this point shows how low Russia's reputation has fallen," said Lipman of the Moscow Carnegie Center.

Of course, much of the interest in Litvinenko's case derives from the dramatic details of his death and life. After being hospitalized with an unidentified illness on Nov. 3, Litvinenko's health quickly declined, his hair falling out and his body shriveling. Eventually, doctors discovered that he had been contaminated with polonium 210, a rare radioactive isotope, traces of which have since been found at dozens of locations in London, Moscow and Germany. Even his funeral was clouded in mystery, as an imam interrupted the proceedings to perform Islamic rites. Several friends said Litvinenko had converted to Islam shortly before his death, although others denied that any conversion had taken place.

Litvinenko first rose to prominence during a press conference in 1998, when he claimed that he had been ordered to kill Berezovsky, whom he had previously befriended while investigating an attack on the tycoon as a member of the FSB's organized crime unit. Litvinenko was subsequently arrested and faced a series of criminal trials before fleeing to London with his family in 2000. There he was reunited with Berezovsky, who had been granted political asylum in Britain.

From London, where he lived a comfortable suburban life partly financed by Berezovsky, Litvinenko spoke out often against his former colleagues in the FSB. But the international press largely ignored his accusations. In a profile of Litvinenko written last year, the Times of London said that "his revelations have turned out to be a bit of a damp squib."

The media's subsequent obsession with the twists and turns of Litvinenko's case has discouraged many human-rights activists and dissidents in Moscow. The mystery surrounding his death has not only overshadowed Politkovskaya's killing, but has also received more coverage than any other story out of Russia this year.

"Not that his death wasn't serious and shouldn't be investigated," said Allison Gill, the director of the Moscow office of Human Rights Watch. "And of course everyone is fascinated because it's like a spy novel," she said. "But what about all the human rights abuses in Russia that are being ignored? Why isn't the international press corps talking about Chechnya, where people are dying and suffering every day?"

Michael Mainville is a freelance writer based in Moscow.