"The Family That Couldn't Sleep"

Read more about D.T. Max's investigation of killer insomnia in the following interview and excerpt. 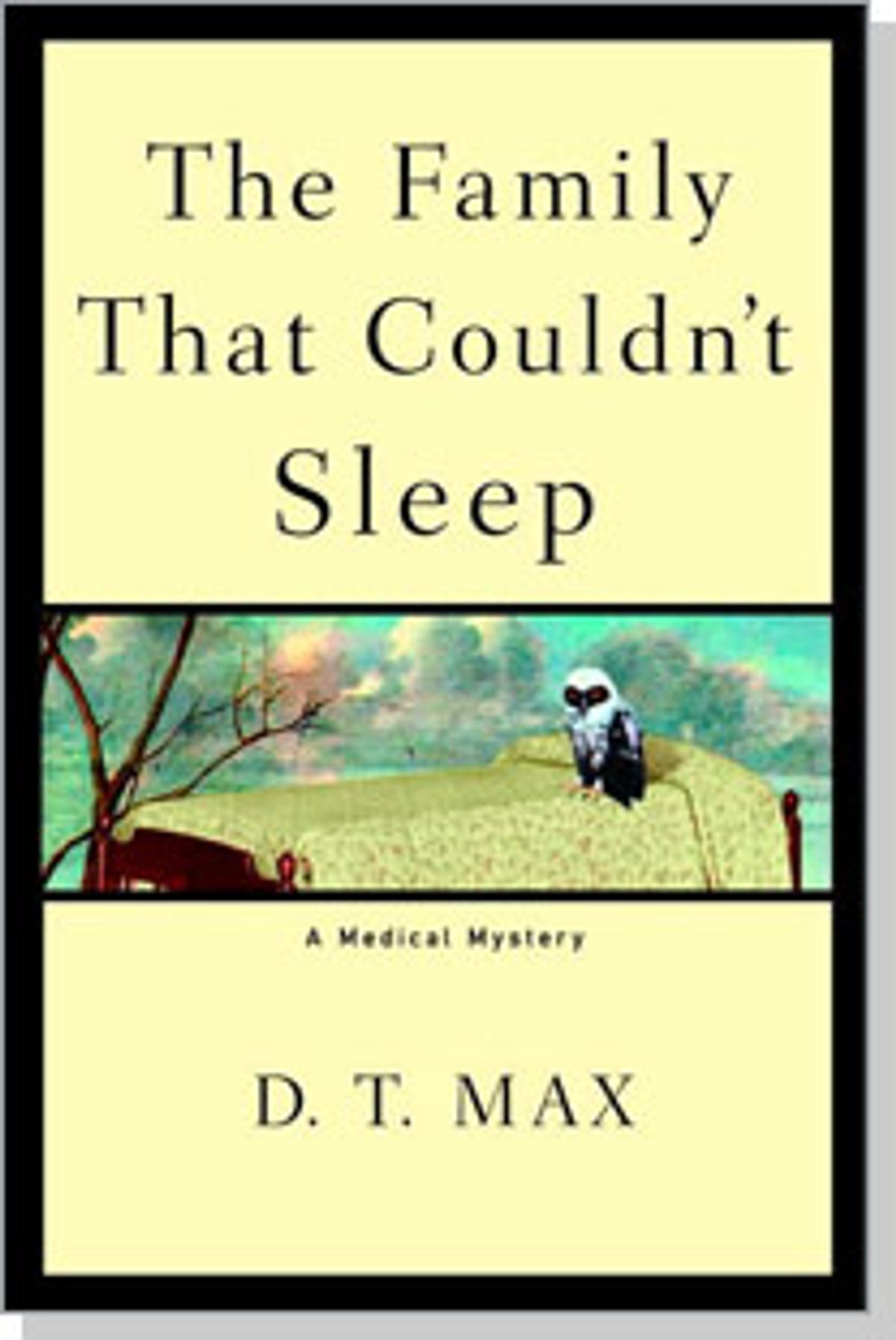 How did you first learn of fatal familial insomnia, the illness that afflicts the Italian family in your book?

We had an issue planned at the New York Times Magazine, where I was a frequent contributor, on diseases and cures that cross borders. I was on the phone with a Chicago neurologist who I knew had interesting cases and he said he had had a patient who had died of fatal insomnia. I said, that's impossible, no one ever died from lack of sleep. He laughed that knowing chuckle of the neurologist confronted with the naiveté of the journalist (how I learned to dread that laugh!) and said, "That's what you think." I said, "I've got to come see you," and he said, "Wait, I've got something even stranger. I know a family in Italy -- rich, cultured, established -- who have had the same disease for over 200 years, 200 years of fatal insomnia." I paused: "Where in Italy?" He said Venice. So I thought to myself, "Death in Chicago"? "Death in Venice"? Soon I was looking for my passport.

The incredible resilience of prions -- the fact that they can lie dormant in soil for years, for example -- makes them truly terrifying disease agents. How significant a threat to public health are they?

They are a major threat because we still don't understand the most basic things about them -- we don't understand how they are transmitted in the wild or what their species range is -- i.e., can chronic wasting disease, a wildly spreading prion disease in domestic deer, infect cows, humans, groundwater?

You write about both literature and science, two subjects that people often see as radically different. Do you?

I embody the question because "dtmax" in chemistry means the maximum change (delta) in temperature. Try Googling it. Actually the glory of words is that they are powerful enough to bridge the gap between speech and science. It's not reversible: Science can't substitute for words, but words can substitute for science. Put another way, when it comes to explaining, all science bows down before rhetoric -- and rhetoric is what writers should be good at.

Do you have any rules of thumb for how to write accessibly about complex scientific subjects, like the quest to figure out what exactly prions are?

This one: After I've mastered a scientific fact, I write it as if I was learning it again for the first time. Another way to state the rule is: I don't pull up the ladder after I've climbed the wall.

"The Family That Couldn't Sleep" is a pretty scary book! Do you have any tendency to hypochondria, and if so how did you fend it off while working on this book?

Well, I already had an undiagnosed neurological disease when I started working on the book, so I didn't have too much room for hypochondria. I spent this rather unsettling afternoon outside of Mount Horeb, Wis., watching hunters drop off possibly infected deer carcasses as part of the state's eradication effort. The Wisconsin DNR [Department of Natural Resources] people would then saw off their heads and throw them in a truck to be tested. Some guy was splashing some sort of bleaching agent around to disinfect, but I didn't see his graduate degree in prion sciences. He just sort of threw it wherever he wanted. So I've told my wife if I start falling apart in my 60s from a mysterious condition that resembles chronic wasting disease in deer, she should call the lawyers.

I thought Matt Ridley's book on Crick, "Francis Crick: Discoverer of the Genetic Code," was very good. I always wondered about Crick. All we ever hear about over here is [James] Watson.

Excerpt from "The Family That Couldn't Sleep"

Who is it that says there is a great difference between a good physician and a bad one; yet very little between a good one and none at all?
-- Arthur Young, "Travels in Italy and France"

In November 1765 a respected doctor from a good Venetian family died in the Campo Santi Apostoli, near the Jewish ghetto in Venice. The cause of his death was "an organic defect of the heart's sack" -- or so contemporary parish records state. In truth no one would have known for sure what he suffered from and we can't know either. But priests ordinarily only wrote detailed descriptions of diseases when what they saw was noteworthy, and it is intriguing that the description of the doctor's illness in the parish book is one of the longest of the year.

The entry records that the deceased suffered for more than a year from "intermittent difficulty in breathing" and adds that he was bedridden and "totally paralyzed for two months" before his death. Many of the doctor's descendants would experience similar symptoms in the course of dying from fatal familial insomnia, suggesting that the Venetian doctor may have been the earliest recorded case of a disease that has gone on to torment his relatives for more than two centuries.

Mid-eighteenth-century Venice was a place of gaiety and vice. The city always had a fairy-tale aspect, but until the seventeenth century its irreality was checked by an appetite for business. Venice stood at the crossroads of east and west, Asia and Europe, and it avidly cashed in on its location. But with the colonization of the Americas, trade turned the other way -- across the Atlantic -- and Venice began spending down its inheritance. Goethe, visiting the city in 1786, noted that the Venetians' lagoon was silting up, their trade "declining, their political power dwindling ... Venice, like everything else that has a phenomenal existence, is subject to Time." The end was near, and everyone there knew it.

Venice's fall, though, was the time of its greatest opulence. This was the era of Casanova's wanton memoirs and the splendid Venetian regattas and processions painted by Canaletto and Francesco Guardi. One story may help to convey the moment: in 1709, there was a ball at the home of a Venetian noble in honor of the king of Denmark, Frederick IV. As the king danced with one of the guests, a newly married noblewoman named Caterina Quirini, his buckle caught a string of pearls that adorned the belt of her dress, scattering them on the floor. The lady paid them no mind. The king was about to bend down to retrieve the pearls, whereupon her husband stood up, walked across the dance floor, and crushed them under his feet, while his wife danced on.

Venice was a hereditary oligarchy. Its ruling class -- its doges, procurators, and ambassadors -- were drawn from two hundred families whose names, like that of the Quirini, had been inscribed in a "book of nobility" in the early fourteenth century. The Venetian doctor descended from one of these patrician families, great merchants and secretaries of state, whose surname adorned one of the central squares of the city. Though he was not himself entitled to wear the red toga that indicated patrician status, he enjoyed many of the other privileges of high birth in the republic.

The doctor had a three-story palazzo on a canal and a country home in the Veneto (both still standing today). The country house was in a town near the Piave River, a trip the doctor could make in three days, by crossing the lagoon by gondola to Portegrandi and then continuing in a carriage. In the country, on terra firma, a doctor of good family could play cards and chess with well-born friends, and supervise his gardens and the collection of rents from his tenant farmers, all the while staying clear of the infections summer brought to Venice.

If the doctor did have fatal familial insomnia -- the idea has been suggested by his descendants in their search for the origin of their mutation -- he likely would have noticed his first symptoms there in the summer of 1764. His servants, seeing his glassy eyes and sweaty forehead, might have gossiped that a witch had hexed him, but the doctor would not have entertained that idea for a moment. He was a graduate of the School of Medicine at Padua, the best in Europe. For him, sickness was not a magical but a natural process. The scientific method was blossoming in the Venetian state, of which Padua was a part. Its secular saint, Galileo, had set out the goal for all to see. "Science," he had written, could be found "in a huge book that stands always open before our eyes -- I mean the universe." To read it, though, you needed to understand the language it was written in: "the language is mathematics." A physician's job, then, was to substitute exact observation for speculation, to look with vision unclouded by metaphysics or theology.

The sleepless doctor could trace his medical pedigree directly to Galileo. Galileo had taught the monk Castell, who had taught Borelli, who had taught the anatomist Malpighi, who had taught Valsalva, who had taught Morgagni, who had taught him. They had many of them learned their craft in the Acquapendente in Padua, the most beautiful autopsy theater in Europe. Its wooden balconies rose up in a narrowing series of concentric ovals -- a "high funnel," as Goethe described it -- from which the audience could look down on the human body lying in Euclidean splendor. Italian doctors were brilliant with their scalpels; seen from above, their work would have seemed to promise to the eager medical student the doctor had once been that if you studied nature hard enough, it would give up its secrets.

Excerpted from "The Family That Couldn't Sleep: A Medical Mystery" by D.T. Max. Copyright © 2006 by Daniel Max. Reprinted by arrangement with the Random House Publishing Group.