Some pig? Some spider! Julia Roberts, Oprah Winfrey et al. give voice to this childhood favorite. 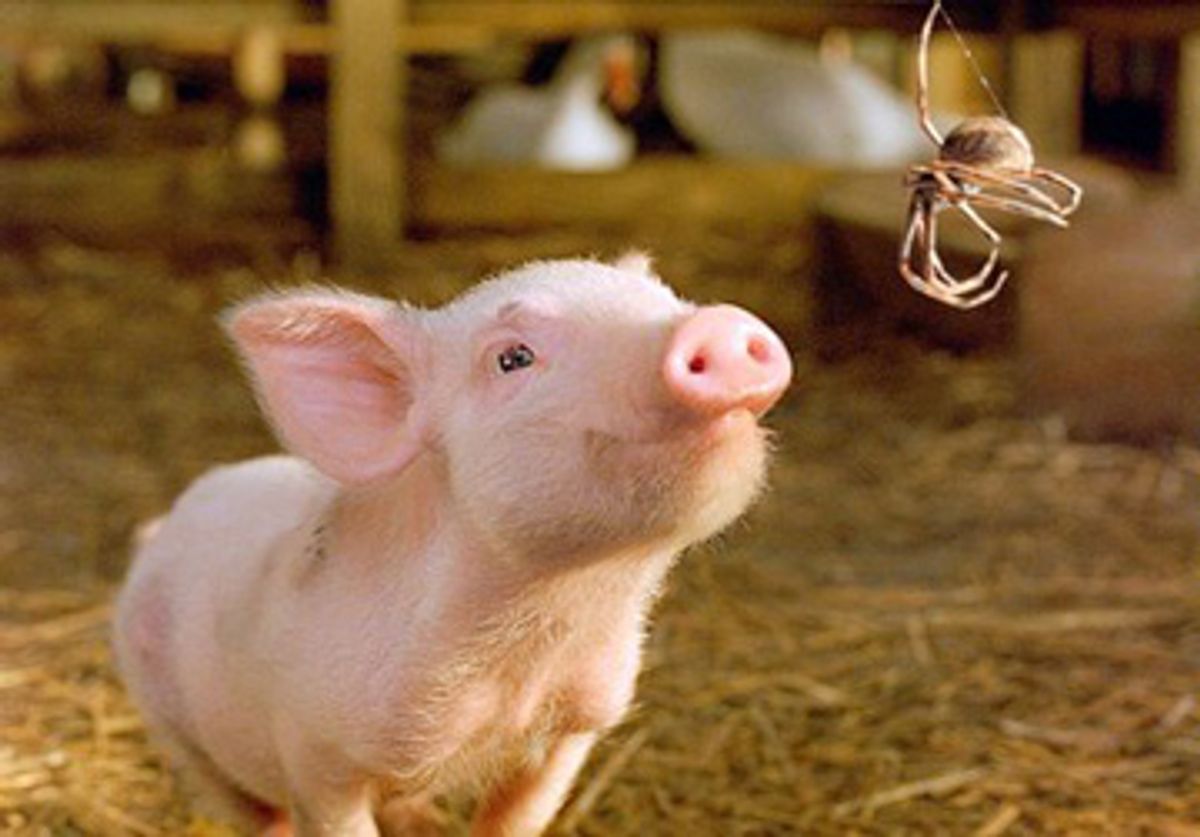 Maybe there's a way to resist the sight of a piglet eagerly suckling away at a baby bottle. But why fight it? The live-action "Charlotte's Web," directed by Gary Winick from E.B. White's captivating and timeless kids novel, is one of those movies that could have gone wrong so easily, particularly considering the fierce love so many of us grown-ups have for the book. But the picture -- its script is by Susannah Grant and Karey Kirkpatrick, from a scenario Earl Hamner Jr. wrote for a 1973 animated version -- always strikes just the right note, honoring the spirit and humor of the novel without oversentimentalizing its delicate themes, among them the pricelessness of true friendship and the importance of recognizing beauty where you find it.

Set in a bucolic Maine community called Somerset County, "Charlotte's Web" is the story of a young farm girl named Fern (Dakota Fanning) who saves a runt piglet from her father's ax. She names the little pink squiggler Wilbur, and loves him so much she even sneaks him into school one day. (She hides him inside her desk, occasionally slipping her hands beneath the lid to give him a swig from that baby bottle.)

But Fern, having been told that the family can't support a pet who will soon reach 300 pounds, is forced to give Wilbur to her Uncle Homer (Gary Basaraba), who lives just across the road. She visits Wilbur faithfully every day, but he also makes new friends at the farm and, because animals can speak to one another when humans aren't around, the conversation in the barnyard flies fast and furious. The gregarious, ever-optimistic Wilbur -- his voice is supplied by 10-year-old actor Dominic Scott Kay -- becomes part of a scrappy but close community that includes an unfailingly polite sheep named Samuel (John Cleese), a motherly goose named Gussy (Oprah Winfrey), a temperamental rat named Templeton (Steve Buscemi) and, most important of all, a fuzzy brown spider of great charm and intelligence named Charlotte (Julia Roberts, whose voice has precisely the silky crispness you'd expect from a talking spider).

The grand drama of "Charlotte's Web" involves saving Wilbur from the smokehouse. But although the movie (like the book) is far from blind to the realities of farm life, it doesn't spew any overstated "cycle of life" crap, either. Wilbur is cute; Fern loves him, as we do; we want him to live: The story's emotional momentum is as simple as that.

As a live-action tale about a talking pig and his friends, "Charlotte's Web" owes something to the sweet-tempered, pastoral "Babe" and its even more wonderful sequel, "Babe: Pig in the City." But Winick (whose last movie was "13 Going on 30") makes sure this movie is still its own creature. The computer animation -- particularly in the case of the fuzzy Charlotte, who has just the right amount of, to borrow a phrase from Thelonious Monk, ugly beauty -- is unobtrusive and unforced. Shot by Seamus McGarvey, the picture has a vibrant '50s feel without being aggressively nostalgic. (The book was published in 1952, and the movie's look serves as a homage to its long-lasting popularity.) The performances are lovely: Fanning never even steps close to the overcuteness line, and Buscemi makes a fine, cranky rat. Best of all may be the narration, by Sam Shepard: His voice, the kind of voice God might have if he'd ever smoked Camels, frames this gentle but potent little story with good-natured authority, making it feel modern and ageless at once.