"The Pursuit of Happyness"

Will Smith plays a struggling salesman in a picture that's less about "getting" than about "not having." 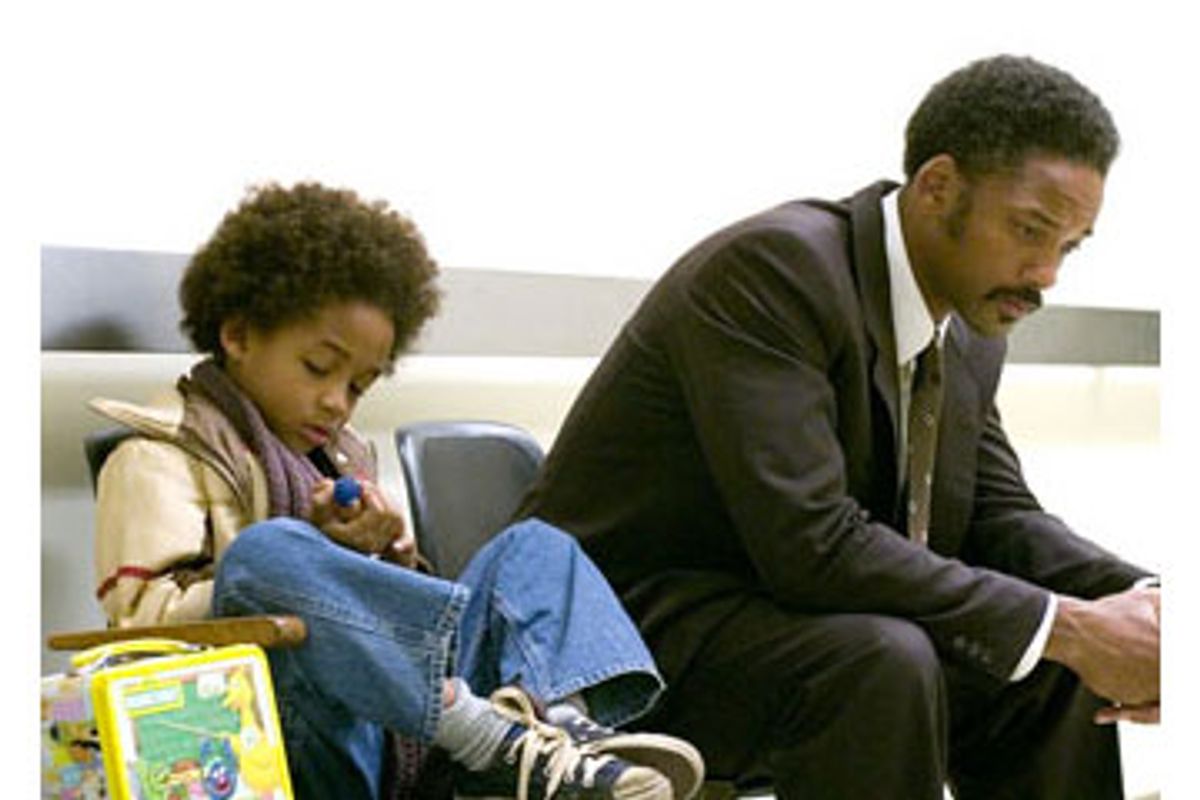 The easy way to read Gabriele Muccino's "The Pursuit of Happyness" is as an inspirational story, a go-for-the-gold heart-warmer affirming that in America, anyone can pull himself up by the bootstraps and make something of himself. This is a movie -- set in early-1980s San Francisco and based on a true story -- about an immensely likable but struggling salesman, Chris Gardner (Will Smith), who never went to college and who's having trouble making enough money to support his family, which includes a wife, Linda (Thandie Newton), and a 5-year-old son, Christopher (Jaden Christopher Syre Smith, Smith's son in real life). Chris pushes for a chance to get into a stockbroker-training program at Dean Witter Reynolds, and he makes the cut. But the internship doesn't pay, and there's no guarantee he'll be offered a job at the end of it. Against all odds, he pushes toward success, eventually turning his life around.

Basically, that's what happens in "The Pursuit of Happyness." And yet that outline doesn't even ruffle the surface of what the movie is about. This is a movie about the state of not having any money, and about how not having money isn't just a bald economic fact but, particularly if you have children, a spongy specter that expands to fill every minute of your day. "The Pursuit of Happyness" isn't a tract about poverty in America, and perhaps partly because it's a mainstream, big-studio movie (and not a grainy indie with junkies and squalling babies), some critics have already complained that it makes homelessness look too clean, too neat and tidy. (I guess we like our movie poor to be easily identifiable by their dirty clothes.)

But the picture's ending -- which is satisfying, possibly even happy, depending on how you look at it -- is almost inconsequential; it's the texture of everything leading up to it that matters. "The Pursuit of Happyness," even within its slickness, gets at intangibles that allegedly grittier movies fail to capture -- like how heavy a wallet can feel when you're down to your last dollar.

Before he becomes a success story, Smith's Chris Gardner spends his days knocking on doctors' doors, trying to sell them an expensive and not wholly necessary device, a portable bone-density scanner. (The thing comes in a plastic carrying case that makes it look like an old 1960s sewing machine; one crazy homeless guy is convinced the thing is actually a time machine.) No one really wants these scanners, but Chris has sunk his family's savings into them, so he has to sell them. One day he stops on the street to chat with a white guy in a nice suit who has just pulled up to the curb in a red sports car. How does a guy make enough money to buy a car like that? Chris asks him affably. The guy tells Chris he's a stockbroker, and when Chris asks him if you need to have gone to college for that, the guy assures him that the answer is no. "You just have to be good with numbers, and good with people."

Chris is both of those things -- in one of the movie's strokes of unapologetically conventional shorthand, he impresses a Dean Witter higher-up by solving the Rubik's cube during a taxi ride -- so he wonders why he can't become a stockbroker himself. But before he even comes close to that goal, the complications pile up and intensify, and he finds himself a single dad who has to support and care for a young child -- with no money coming in, and not for lack of trying.

For the first two-thirds of the movie the setbacks that befall Chris, each one stepping resolutely on the tail of the last, constitute a kind of tragicomic serial. (The well-paced script is by Steve Conrad, writer of the existentialist suffer-drama "The Weatherman.") Chris entrusts a meek-looking street musician to guard one of his scanners for a few minutes -- it's worthless to anyone but medical professionals -- and she runs off with it. On a short lunch break from his stressful, demanding stockbroker training class, he's hit by a car -- he's OK, but the impact sends one of his shoes flying, and he has to return to class limping on one stockinged foot, a sartorial touch his classmates can't fail to notice.

Things get much worse for Chris and for Christopher, who tags along like a good sport as his dad tries to sell off his few remaining scanners on the weekends, desperately needing to bring in a little cash. And as the situation for these two becomes more dire, the movie becomes more painful to watch, although Muccino (who previously directed "The Last Kiss" -- the original, Italian version, not the recent remake) moves us from one intense scene to the next with a carefully calibrated sense of melodrama that seems more like what one would find in European humanist cinema than in a mainstream American movie: There's a difference between milking tears and, as Muccino does, simply allowing the tap to open; sentiment doesn't equal sentimentality.

A friend of mine, critic Steve Vineberg, remarked that he believes "The Pursuit of Happyness" consciously echoes "The Bicycle Thief," and I think he's right. (It's completely plausible that an Italian filmmaker would be attuned to and inspired by the vocabulary, and the deep emotional resonance, of Vittorio De Sica.) Smith's performance is typically buoyant: As we watch his character here, dressed in a not very expensive but always neat dark suit, tirelessly schlepping through the city with those damn scanners, we wonder why the uselessness of it all never gets to him -- he's like one of those inflatable clowns who take every punch and never go down. But only up to a point: Smith has some moments here where something identifiable only as muted terror crosses his face.

Smith's rapport with his young costar is predictably wonderful, and the younger Smith gives a fine, subtle performance: He's cute, but never too cute, and he's one of those kids whose face and demeanor probably had a certain gravity even in infancy. "The Pursuit of Happyness" -- the misspelling is deliberate, and I can assure you it's not part of some coy "innocence of childhood" claptrap -- never devolves into a sappy soaper about surviving tough times with laughter and smiles. At one point Chris yanks young Christopher's arm with undisguised frustration and impatience. The visible roughness of it is unsettling, but the moment is a reflection of the way real-life parenting, particularly when a parent is under extreme duress, doesn't always adhere to the laws of parenting books.

Some people will see "The Pursuit of Happyness" as a glorification of capitalism, but the movie is much less about "getting" than it is about "not having." Frame by frame, we can't help being conscious of how careful Chris has to be with the little money he has. Muccino makes Chris' straits painfully clear when one of the stock-brokerage higher-ups (played by character actor James Karen), just about to hop into a cab, realizes he's left his wallet in his office and asks Chris if he can borrow five bucks for the fare. (Chris has kept his situation a secret from his superiors, and the movie, to its credit, doesn't go the cheap route of villainizing white guys in suits -- they may be unaware of the realities of Chris' life, but they're never unkind.)

Chris opens his wallet, and we see a five and three ones. That equals a cab ride and a cup of Starbucks for the executive, but it may be all Chris has left for a day's worth of meals for his kid. Chris hesitates before handing over the five, and the exec plucks it out of his hand gratefully.

This small moment may be the most painful one in the movie, perhaps because Smith plays it with such wry, resigned matter-of-factness -- and because the executive has no idea of the harm he's doing. But in this generous-spirited picture, the guy eventually remembers to give the five back, even though by that point, Chris doesn't need it so badly. Five bucks is five bucks, except when it's all the money in the world.