Regardless of Sen. Tim Johnson's health, Bush could easily hand the Senate back to the GOP -- by appointing the Connecticut senator to fill Bolton's slot at the U.N. 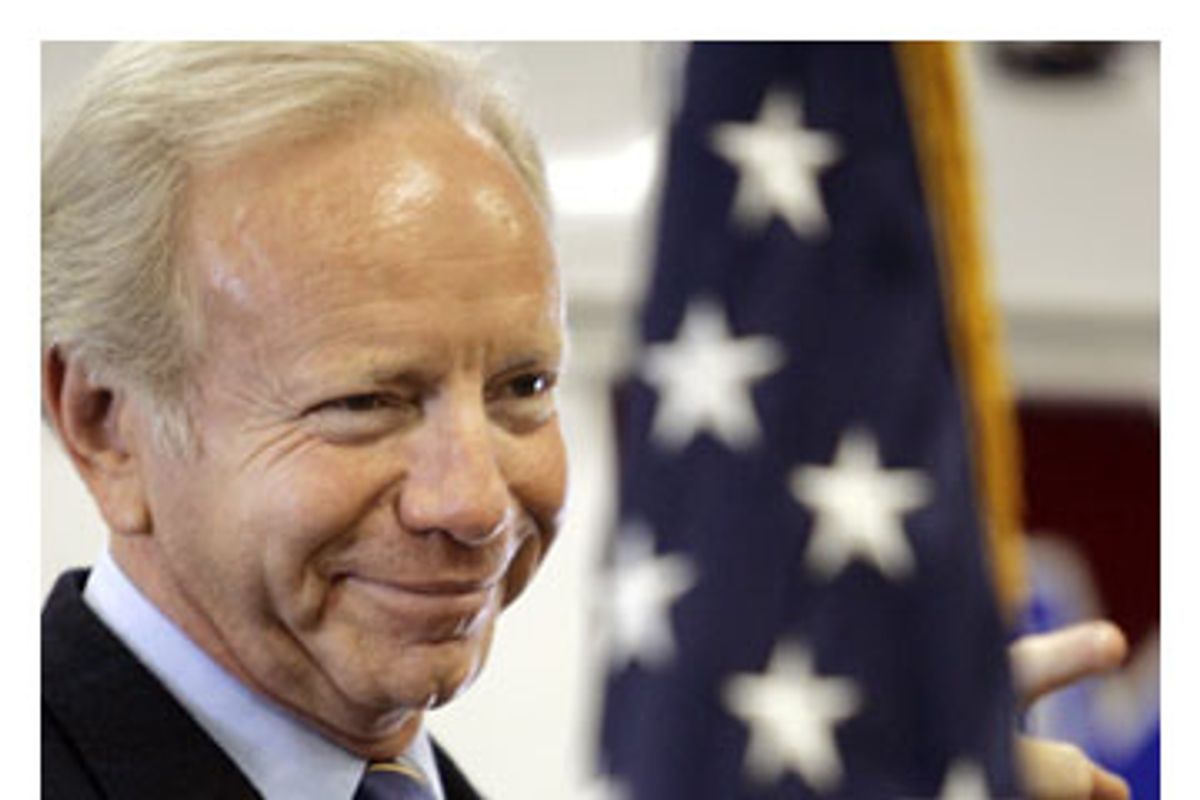 The sudden illness of Sen. Tim Johnson, D-S.D., shook Democrats from their post-election bliss by reminding them that their Senate majority is as narrow as it could possibly be -- and that an unexpected misfortune could instantly deprive them of power in Congress' upper chamber.

Although Johnson now appears to be recovering from a brain hemorrhage that required emergency surgery on Wednesday, the potential shift that could result from his incapacitation certainly awakened Republicans to the possibility of regaining lost power. Nowhere are such chances eyed more keenly than in the White House, where George W. Bush and his aides face spending his final years as president under investigation by the Senate as well as the House of Representatives.

But regardless of Sen. Johnson's health, the president may yet be able to tip the balance. With a single stroke, he could restore control of the Senate to the Republicans, fill an embarrassing vacancy in his administration and score bipartisan points -- by appointing Sen. Joe Lieberman, I-Conn., to serve as the next U.S. ambassador to the United Nations. Should Lieberman be nominated and accept that position, Connecticut's Republican Gov. Jodi Rell has the constitutional authority to name a new senator.

In many ways, Lieberman provides a perfect choice for Bush to replace John Bolton, the departing ambassador who resigned recently because the Senate wouldn't confirm him. Nominating a longtime Democrat who has endorsed many of the Bush administration's foreign policy positions, especially on the war in Iraq, would give the appearance of bipartisanship without requiring any real compromise with the opposition.

Just this week Lieberman joined a congressional delegation to Iraq that included John McCain, R-Ariz., providing moral support to the Arizona senator's call for an escalation of the American military effort. He has repeatedly denounced the "partisanship" of Democrats who criticize the war and the White House, a favor repaid by Karl Rove with open Republican support for his reelection campaign this fall. More broadly, Lieberman shares the world outlook of the Bush White House concerning not only the Mideast and Israel but also the global "war on terror," belligerence toward Iran and Syria, and a strict embargo against Cuba. He is quite comfortable with the GOP's neoconservative wing, as evidenced by his participation in organizations such as the Foundation for Defense of Democracies and the Committee on the Present Danger.

Although Lieberman vehemently disagrees with the president on the issue of climate change, his overall perspective wouldn't require any great adjustment to conform with administration policy. (Indeed, Lieberman cheerfully submitted to much more challenging adaptations in 2000 when he moved leftward to run as the Democratic vice-presidential nominee.) He is somewhat less obnoxious personally than Bolton, but not so very different in substance.

To Bush, however, Lieberman might represent a refreshing change -- if only because the long nomination struggle over Bolton could end at last with a resounding victory instead of an infuriating defeat. Selecting a three-term senator who has made alliances on both sides of the aisle would ensure a smooth confirmation process. Many Democrats have mixed feelings about their old colleague these days, and he feels the same way about many of them. But institutional comity would require them to vote for him. (And how amusing for the Republicans to watch their adversaries vote themselves back into the minority with gritted teeth.)

According to the New York Daily News, Lieberman actually was the president's first choice for the U.N. post. Thomas DeFrank, the paper's Washington bureau chief, reported last December that Bush had offered the job to the Connecticut senator, who thought about it for a week before saying no. If that is true, then he may be at the top of the list of nominees, which is said to include U.S. ambassador to Iraq Zalmay Khalilzad, Undersecretary of State Paula Dobriansky and Jim Leach, R-Iowa, who lost his congressional seat last month.

Many observers doubt that Lieberman will change his mind now if offered the U.N. post again, despite perks such as a big apartment in the Waldorf-Astoria Hotel, a chance to live in Manhattan rather than Washington and a turn on the world stage in the tradition of the late Daniel Patrick Moynihan. They can't imagine why Lieberman would accept an appointment that is likely to last for only two years when he can simply stay in the six-year sinecure that he worked so hard to keep.

Certainly such doubts make sense. The likelihood that Lieberman would leave the Senate is probably quite small. But if the Republicans really want to steal the Senate back before the Democrats take over, they can certainly whisper tempting blandishments into his ear. How about a nice, million-dollar job with, for instance, the Carlyle Group?

Or maybe even the ego-boosting prospect of another vice-presidential nomination in 2008 -- this time on a "bipartisan" ticket with friend and fellow hawk John McCain?