Fifteen years ago, I converted from Catholicism to Islam. My mother still doesn't understand my choice, but there's not a day that I regret it. 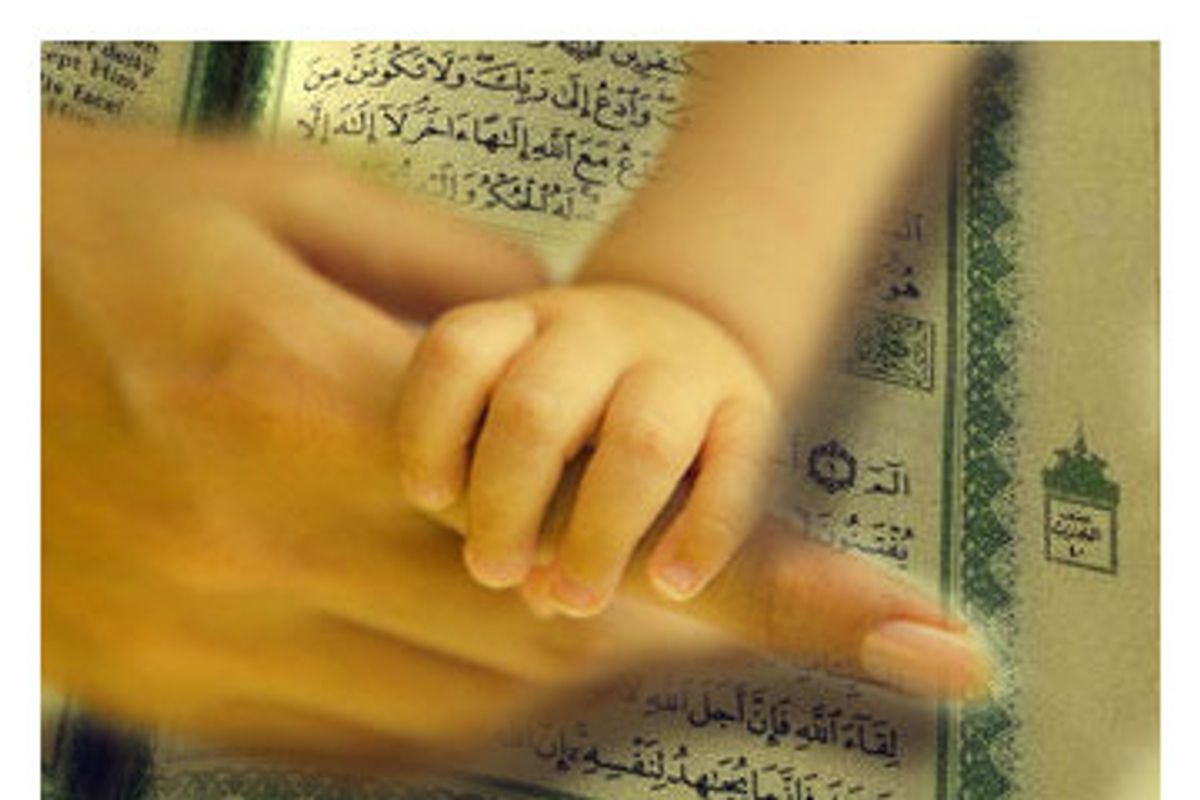 My mother believes that for women, most problems and solutions begin and end with the man in her life. But back then there was no way this feminist would admit to anyone -- including herself and especially not her mother -- that she had converted because of a man.

But today, at 42, and secure in my faith, I can admit that if it weren't for Ahmed -- though he is now my ex-husband -- the word "Islam" would probably still conjure up images of black-cloaked women and melodramatic Sally Field movies in my head. After all, I am my mother's daughter.

The day I left my Italian-Bronx neighborhood to go to college, I knew my communion and confession days were over. I was never going to let Jesus stick to the roof of my mouth again. There were too many contradictions for me in Catholicism. Why was my never-miss-Sunday-mass father excommunicated after he and my mother divorced -- especially when she was the one having the affair? How could the pope have an Olympic-size swimming pool while millions of his people were starving? And how could I tolerate the church's position on abortion and women's rights?

By the time I transferred from Barnard to UCLA, I was a lapsed Catholic who wanted nothing to do with organized religion. But I needed to believe in something.

During my years at UCLA I spent more hours making fliers, organizing demonstrations and making phone calls -- and once or twice bail -- than I spent studying. I defended clinics under attack by anti-abortionists; I worked for funding for the homeless and against nuclear testing; I traveled to Nicaragua to build houses and to Arizona to herd sheep for Navajos fighting to keep their land.

I tried to change the world one cause at a time.

In the summer of 1988, I interned at the Nation magazine's Washington office. While researching a story about Mubarak Awad, a Palestinian-American psychologist and founder of the Palestinian Center for Non-Violence, the president of the American-Arab Anti-Discrimination Committee invited me to go on a student delegation to the Occupied Territories. Two weeks after returning to UCLA from the West Bank and Gaza I gave a talk to 50 students about my experience. I explained how the intifada had propelled women into major leadership roles. How women-run factories and businesses were building an infrastructure for a future state.

At the back of the room stood a man, 6 feet tall with bright red hair. He held his hand to his chin, and his focus on me helped me focus. When I finished, he applauded louder than anyone else. I was relieved the talk had been a success -- at least no one from the audience had shouted out, "Arab-loving whore!

The man waited until I gathered my notes and walked off the stage before approaching me. "Brilliant speech," he said. I thanked him, trying not to blush. Extending his hand, he said, "My name is Ahmed." But I already knew who he was. He was president of the Muslim Students Association and, like me, he wrote a column for the school paper, where we were both slotted "on the left." I was a fan.

This was a guy who knocked on every door in Islam Vista, in Santa Barbara, Calif., to campaign for Jesse Jackson. But that day, when he smiled a win-me-over smile, I thought the same thing I'd wondered whenever I read his column, "How could a smart, socially conscientious guy be a Muslim? Be a part of any organized religion?" He was a feminist. A feminist Muslim -- wasn't that an oxymoron?

As Ahmed and I spent the next several years deepening our friendship -- and eventually marrying -- I returned again and again to those questions. He mostly stood out of my way. It didn't matter to him if I was Catholic or Muslim or Jewish or Marxist (though he thought Marx grossly underestimated the seduction of capitalism). Ahmed wanted me to come to my own conclusions about Islam. After all, it was what he'd had to do. He'd been born into a Muslim family, but after they immigrated from Cairo to Los Angeles, Islam played little visible role in their lives. It wasn't until Ahmed read the Quran for the first time in college that he helped his parents reconnect with their faith.

I studied Islam in order to debate Ahmed and his belief system, but the more I learned, the more I found how greatly I had underestimated my own ignorance. Mine wasn't a hit-you-over-the-head epiphany, but rather a slow and steady stream of aha's.

The feminist in me aha'd when she realized that in the Quran God is neither male nor female. The scholar in me aha'd at the various interpretations and schools of thought within Islam, most of which depict the religion as a social and constantly changing belief system, rather than the fixed, dogmatic one the government of Saudi Arabia would have the world believe.

But it was the social activist in me who aha'd the loudest when she got a deeper understanding of "jihad" (a term that has been grossly misinterpreted in the media). "Jihad" is a word with many meanings, but foremost it describes one's personal and inner struggle to live a just life, a life in which one is obligated to defend those who cannot defend themselves. Wasn't that what I had always tried to commit my life to -- fighting, or, more accurately, struggling, for justice?

Who knows? Maybe I would have remained a Catholic if I had discovered the Catholic Worker movement or Catholics for a Free Choice earlier in life -- organizations whose missions emphasize economic and social justice. Maybe I would have remained a Catholic if the one priest who talked and listened to me when I was 13 had done so face to face and not in some dark box (and if he had, along with hearing me confess and granting me absolution, counseled me about surviving adolescence). Then there was the question of Jesus. It had always been hard for me to believe God took human form. But it was as a Muslim that I learned what an incredible prophet he was -- the epitome of the social activist.

After years of questioning Ahmed about everything, I found my answers in Islam. But as a convert I had to work for everything I believed. I was constantly translating, not only the language of the Quran, but the rituals too. It was hard to trust that one could have a one-to-one relationship with God, and I still believed I needed an intermediary, some authority, someone more worthy to intervene on my behalf. So I turned to the "real" Muslim, the one born into faith, for all my answers. I made Ahmed my teacher, my priest.

While equality was the rule in every other aspect of our lives, when it came to matters of faith, I wanted Ahmed to call the shots. When we prayed, though he encouraged, often insisted, that I lead the prayer, I refused. Ahmed was the authority. Besides, he sounded so beautiful when he recited the Quran in Arabic. I wanted him to give me all the answers, and when he refused, my questions turned into childish badgering: "Are you sure if you swallow accidentally while you brush your teeth that doesn't break my fast?"

It wasn't until my son was born that I truly grew up into Islam. Ali was seven weeks premature, and small enough to fit in the palms of his father's hands. The doctors told us Ali couldn't go home until he was able to regulate his own body temperature. I could hardly swallow as I watched my son in his plastic incubator, trailing tubes and wires to help him breathe. It had taken years of trying and fertility testing for Ahmed and me to get pregnant: I couldn't believe God would take our son from us now. I felt like a kid again -- swept back in time to age 12, when I'd been convinced God had killed my friend Barbara by giving her leukemia for no reason at all.

Desperate for hope, I saw breast-feeding as the one way I could help Ali heal -- but he was too weak to latch on. So on the first day of his life, instead of a newborn suckling at my breast, I nursed an electric pump (on loan from the hospital) to increase my milk supply. Then -- somehow -- the loud methodical chugging of the pump's motor helped to drown out my fear. "In the name of God, the Benevolent, the merciful..." I began reciting the first Sura in the Quran. "...It is You we serve, to You we turn for help..." There, alone in the hospital, I spoke to God for the first time, one to one, with no intermediary. And I understood that the God I was talking to was compassionate and merciful.

Two weeks later, Ali began to nurse. The day I took him home in his oversize blue-striped onesie, I knew God had heard me.

Though I still love my son's father, Ahmed and I have been legally separated for a year now. There were, in the end, some questions that Islam could not answer. But because of our faith, a lot of prayer -- and yes, some therapy -- we have remained friends and continue to raise our son together.

I'm not the same Muslim I was 15 years ago, but I am still a Muslim. And last week, after all these years, when I told my mother that Ali couldn't eat her baked beans because they were made with pork, her response was the same as ever. "That's ridiculous," she said. Then she mumbled, "Well, let's see what you believe when the next guy comes around."

I didn't respond. My conversion may have started with a man, but it continues with me, and it's never-ending.

Patricia Dunn is freelance writer and editor for Muslimwakeup.com. She teaches writing at Sarah Lawrence College.