It's got a mysterious history and a texture that's more lubricant than libation. But old-fashioned eggnog is still America's holiday cocktail of choice. 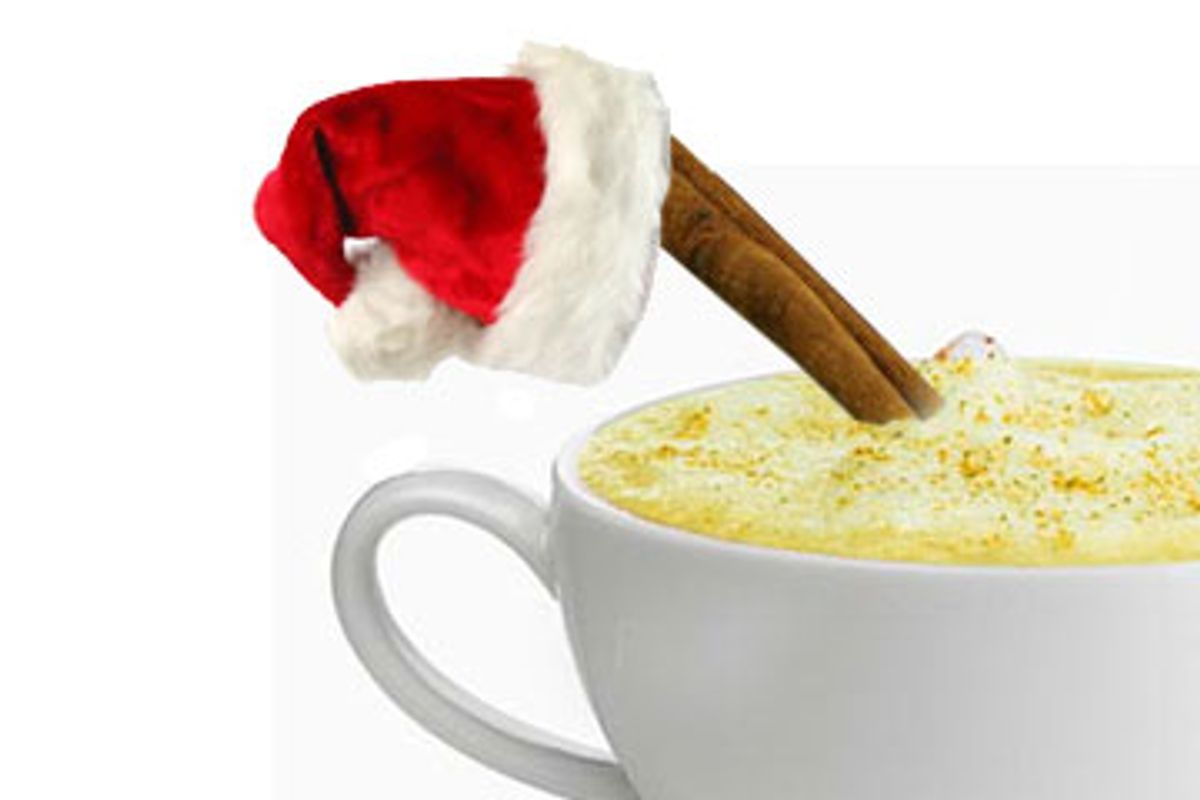 What the hell is a nog anyway? Among the festive beverages of Christmas -- including the wassail bowl of warm ale bobbing with apples; the mixture of Scotch and ginger wine known as whisky mac; and the traditional Yuletide punch of rum, brandy, lemons and oranges -- eggnog reigns supreme. So far-reaching is its popularity that, come Thanksgiving, red-and-green cartons of it line the dairy cases of nearly every supermarket across the U.S.

The origins of the word "nog" are shrouded in mystery. It might be a wooden block embedded in a brick wall, into which nails are driven for mounting things. Or it could be a dark foamy ale that's been brewed in Norfolk, England, since the 1600s. But nowadays a nog rarely stands on its own, occurring mainly in compound form as eggnog. Even Webster's definition, with its elastic recipe -- "An often alcoholic drink containing beaten egg, milk, or both" -- asks more questions than it answers. And what about "noggin"? It's a waggish term for one's cranium, of course, but the dictionary lists two further meanings: 1) a small quantity of drink, or 2) a small carved mug -- which led one commentator to suggest with apparent seriousness that eggnog actually represents a shortening of the bar-side request, "Egg and grog in a noggin, please." Say it real fast when tipsy, and it turns into "eggnog," I guess.

Some accounts claim that Capt. John Smith knocked back bumpers of eggnog in Jamestown, Va., as early as 1607, and that this "nog" is really just a corruption of the word "grog." In line with 17th century English recipes, Smith's eggnog would have been a simple concoction of ale mixed with eggs, which sounds vile. But, hey, isn't that just like having a hangover remedy mixed in with the substance that produced the hangover in the first place? What is certain as far as eggnog and Virginia are concerned is that George and Martha Washington indulged in it during their 1769 Christmas festivities at Millbank -- his sister Betty Lewis' stately home near Williamsburg -- as part of an oddly modern-sounding dinner featuring ham made from hogs fed on mash from George's Mount Vernon distillery, oysters from the nearby Rappahannock River, fresh corn from the surrounding fields baked into a souffli, cucumber pickles and pumpkin chips -- whatever those were. Washington must have been a big fan of eggnog, because he had his own special recipe that, in addition to eggs, milk and cream, was spiked with brandy, whisky, rum and sherry. Clean out the liquor cabinet, why don't you, George?

It's tempting to assume eggnog is British, partly on the basis of the Anglo-Saxon derivation of the name, and partly because of English punches it resembles. But what if eggnog is really an American invention? That would explain why, unlike the English prototypes, no modern American version features ale or beer. Also, the presence of rum in our most common recipes is a reminder that rum -- a byproduct of the trade in sugar cane and slaves in the New World -- was the most abundant alcohol in the Colonies. Finally, an additional piece of evidence for an American origin involves Alexis Soyer, the French expatriate chef and enterprising humanitarian who invented the soup kitchen to address the Irish famine and the camp stove to cook for wounded Crimean War soldiers. It seems one of Soyer's more harebrained schemes, described by Sarah Freeman in her book "Mutton & Oysters," was to open an American-style bar in London serving American cocktails. One of the cocktails prominently mentioned? Eggnog, of course.

Still other theorists opine that eggnog didn't originate with the Brits, but was an American adaptation of a French recipe dating from a time in the 18th century when American colonists were tight with the French (and I mean that in more ways than one). The French recipe is known as "lait de poule," which translates, repulsively, as "chicken milk." In modern Quebec, the drink goes by the name lait de poule to this day, though the rest of Anglophone Canada calls it an "eggflip," which suggests to me not an Xmas beverage laced with rum, but one dosed with LSD. While modern Québécois quaffers associate lait de poule with an American-style Christmas, the drink got a nod 150 years ago in Gustave Flaubert's "Madame Bovary," in which the character Justin asks for one to fortify himself, presumably for sexual purposes. (Oh yeah, Emma was hot!) The aggressively luxurious egg, cream and milk composition of eggnog also suggests a French origin. In Normandy and Brittany -- provinces that produced the greatest migration to Maritime Canada -- such a relentless use of rich dairy products is the epitome of good cooking.

Of course, one more permutation of eggnog needs to be addressed. How did the hot version come to be called a "Tom and Jerry"? When I was a kid in Minnesota, the eggnog my brothers and I furtively gulped right from the carton contained plenty of rum flavoring, but no actual alcohol. We couldn't help noticing our parents sipped a warmed and considerably more alcoholic version, called Tom and Jerry, out of pressed-glass punch bowls at their Christmas parties. Naturally, we thought the name was a tribute to the animated cat and mouse who chased each other across our black-and-white TV -- and it seemed a fitting one for a drink that made adults act as silly as cartoon characters.

In fact, the notion of spiking warmed eggnog dates at least to the mid-19th century. The cocktail itself was a turn of the 19th century American invention, whose greatest proponent and popularizer was professor Jerry Thomas, a bartender at New York's Metropolitan Hotel in the years before the Civil War. Thomas (who also invented the martini, which he called the martinez) penned the world's first mixed-drink formulary, "The Bar-Tender's Guide, or How to Mix Drinks." Prominent among his recipes was one for eggnog, and theorists believe a heated version of the recipe, which became popular around that time, was dubbed Tom and Jerry in tribute to the "Professor." Others say Thomas actually invented the drink himself, though that prompts the question: Wouldn't he have called it Jerry and Tom, in observance of the proper sequence of his own name? Wikipedia, that unimpeachable source, claims the hot nog was named after two characters in Pierce Egan's monthly newspaper journal (an early forerunner of the blog) titled "Life in London," and subtitled "The Day and Night Scenes of Jerry Hawthorn Esq. and his Elegant Friend Corinthian Tom." That literary masterpiece engendered a famous 19th century expression: Whether used as a noun or verb, "Tom and Jerry" meant a violent altercation between drinkers.

Fond memories of my childhood tipples spurred a recent trip to my supermarket for a batch of the locally made stuff. As I'd remembered it, the handsome quart container was green and white, limned with poinsettias and galloping reindeer. But were those small white orbs sprinkled around the carton Christmas ornaments or alcoholic bubbles? The ingredient list at the bottom of the carton told a mournful tale:

Hmm. It sounded more salutary than, say, a bag of Doritos, but there was still a sort of useless complexity about it, considering eggnog is actually a milk product with an expiration date. (I shuddered to imagine the ingredients in the canned variety, which keeps almost forever.) The nutritional value panel was nearly as alarming. But wait, hope: Far from being the cardiac arrest in a can I'd feared, eggnog's caloric content -- 180 calories, with 80 attributed to fat, 24 percent of it saturated -- came as a pleasant surprise, especially since drinking the stuff is usually a once-a-year occurrence. But my cheer was short-lived: I noticed the figures were calculated based on a 4-ounce serving size. Nobody has ever, ever, ever consumed only 4 ounces of eggnog -- and that's before adding alcohol. Figure another 73 calories for an ounce of rum -- or, what the hell, 146 calories for a couple of shots -- and you could easily drink half your daily allowance of calories in one eggnog binge.

But developing a Santa-like physique is not the only risk associated with eggnog. During the salmonella egg scare several years ago, warnings were broadcast about the use of raw eggs in homemade eggnog, a danger I instantly assumed was overblown. (The real salmonella scare is with cross-contaminated chicken, improperly butchered raw beef, and -- I'm so glad to add to the list -- organic spinach from California.) My mom sometimes made eggnog by throwing a couple of raw eggs with some whole milk, sugar and nutmeg in the blender. It never made my brothers and me sick, but we secretly preferred the engineered zing of the store-bought stuff. For us kids, the appeal of eggnog was always its heady, artificially flavored richness and texture that verged on the extraterrestrial. Even then, I'm sure it contained a poisonous cocktail of flavorings and additives, and had a haunting bouquet redolent of rum and nutmeg, a texture like a sex lubricant, and a color like the first appearance of jaundice on a junkie's pink cheek. But come Christmas, we craved it more than fruitcakes, candy canes or chocolate Santa Clauses. There was just something wholesome about it. If it contained milk and eggs, our unformed brains reasoned, how could it be naughty? Those were such innocent times.

If this article hasn't made you swear off eggnog permanently, here are a few recipes to try this season.

James Beard, in "Fireside Cookbook" (1949), gives a bartender's formula for an individual serving of eggnog, something like the recipe my own mother used:

Shake ingredients together and strain into tall glass. Garnish with a sprinkle of nutmeg on top.

For a much richer, punch-bowl-size batch, this recipe can be made days ahead and left to chill in the refrigerator until party time.

Separate the egg yolks from whites. In a big bowl, mix yolks with sugar until pale and slightly thickened. Add milk, liquor, cinnamon, cloves, vanilla and nutmeg and combine well. Chill for five hours or overnight.

In a separate bowl, whip cream until soft peaks form. Set aside. Using another clean bowl and beater, whip the egg whites until they forms soft peaks. Then, add whipped cream and egg whites to chilled egg mixture and fold in until incorporated. Sprinkle each serving with additional nutmeg. Makes 30 servings.

Finally, for the salmonella-fearful, here's a recipe that utilizes cooked eggs rather than raw ones. But I don't really recommend it, since taking chances with your health and financial well-being is half the fun of Christmas!