This lush, romantic melodrama, starring Naomi Watts and Edward Norton, is an act of mainstream daring. 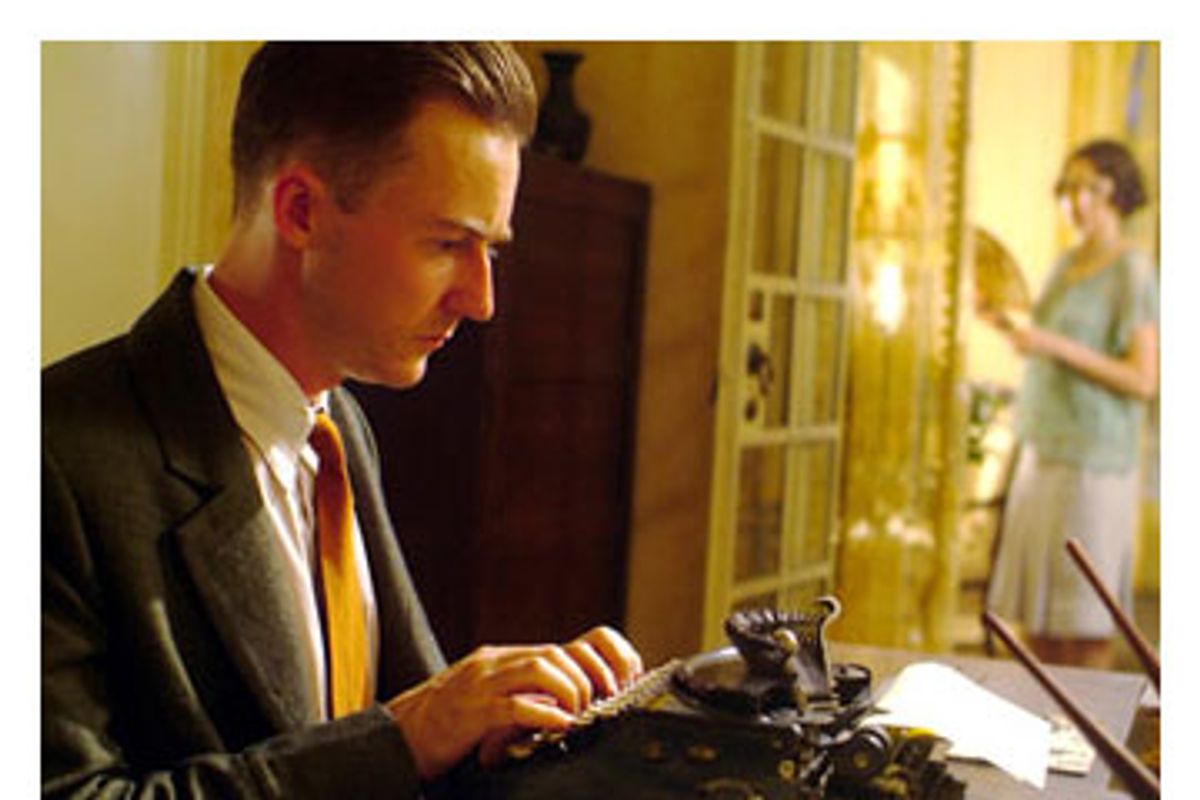 Even as movies have become more oversized -- piling on the money and special effects in a grab for our attention -- they've lost the power to overwhelm us. A few filmmakers have tried to prove that there's still a market for historical adventure epics, but the pictures they've given us -- parade floats groaning under their own weight like "Kingdom of Heaven," "Alexander" and "Troy" -- have been lousy. Still, these pictures get made because they can be sold as action movies.

Lush, romantic melodramas are another story: They've gone out of fashion and out of favor. We've grown to prefer modest domestic dramas, pictures that take place in bedrooms and kitchens, almost literally in our own backyards. Equating dreariness with honesty, we've come to believe that seeing big emotions played out on an even bigger landscape would be too embarrassing, too gauche, for our modern sensibility.

Maybe that's why John Curran's resplendent, enveloping "The Painted Veil," a movie that would have seemed conventional 30 years ago, is an act of mainstream daring. Curran's last movie, "We Don't Live Here Anymore," based on two Andre Dubus short stories, was a drab tale of unhappy, philandering academics, a picture in which even the characters' most overwhelming feelings could fit on a postage stamp. "The Painted Veil," also a story about marriage -- it's based on a 1925 novel by Somerset Maugham -- is a wholly different endeavor, a picture that nods to the sweeping romantic epics that were still being made right through the '70s, by directors like John Schlesinger and David Lean, although not to the lacquered snoozers of Merchant-Ivory. (With the exception of "A Room With a View," a miraculous accident, the Merchant-Ivory outfit made a practice of throttling the life, prettily, out of any source material it seized upon.) "The Painted Veil," which is set partly in rural China (it was shot in Guangxi Province), is stunning to look at: The cinematographer is Stuart Dryburgh, and he captures the beauty of the countryside's plains and vistas without overvarnishing them. Even the score, by the gifted Alexandre Desplat (the pianist is the classical musician Lang Lang), is restrained and passionate in all the right proportions.

Sometimes even craft can't save a picture from becoming a boring exercise in classicism, a lost, nostalgic ghost. But Curran, his actors and screenwriter Ron Nyswaner have made an old-fashioned melodramatic epic that, as steeped as it is in the language and tradition of old movies, is never less than thrummingly alive. The picture tells the story of Kitty (Naomi Watts), a self-absorbed young Englishwoman from an upper-class family ruled by an overbearing mother who's eager to get rid of her. She rushes into marriage with the dutiful but dull Walter (Edward Norton), a bacteriologist who's about to leave England for Shanghai. The cultural adjustment isn't much of a problem for Kitty: There are plenty of her fellow English flitting about the colony, and she immediately falls into an affair with the casually dashing vice consul Charles Townsend (Liev Schreiber). Walter learns of the affair and, stung to the heart, tells his wife that he's heading to a small, remote village to stem a cholera outbreak there -- and then orders her to come with him. "Surely, it's no place for a woman? Why should I go?" she protests, becoming a delicate flower in need of protection when being a sexually liberated modern creature doesn't suit her. "To cheer and comfort me," he responds flatly, showing a bitter cynicism we haven't previously seen in this gentle, awkward fellow. He says he'll allow a divorce only if one specific circumstance is ironed out (it can't be), and so, reluctantly, she packs her parasol and a few cases of clothing and, borne on a chair across this parched, loveless landscape, accompanies her husband on a journey whose end might spell her death. In his hurt and festering sense of betrayal, Walter is hoping it will.

What follows isn't just a colonialist adventure in a foreign land, or even one of those ubiquitous generic journeys of self-discovery, but an adventure of marriage itself, and an exploration of the way the outside world can never be shut out -- it becomes part of who you are as a couple. Those are delicate, complicated ideas for the sort of picture that's generally called, with more than a flicker of derision, a "weeper." But the tears "The Painted Veil" gets out of you are earned, not jerked. Curran navigates the material so deftly that even if you think you know what's coming next, it hardly matters: Within the picture's grand scope, there's always some small scene, or some delicately wrought supporting performance, to keep us grounded in the intimacy of the story. Toby Jones -- the marvelous actor who, earlier this year, appeared as Truman Capote in "Infamous" -- gives an affable but tough-minded performance as Waddington, one of the few Englishmen in the village, who befriends Kitty and somehow -- we barely see it happening -- helps nudge her out of her self-absorption. And even though the vibrant Diana Rigg is perhaps the last actress we'd want to see playing an elderly missionary nun, her performance here is so direct and so devastating -- a bull's-eye hit from a skilled archer's bow -- that even in her wimple and habit, she's not so far removed from the élan of Mrs. Peel. Forget being married to just a regular old guy; Rigg's Mother Superior is married to God, and her take on the way all love becomes routine is both piercing and oddly comforting. It's just one of the movie's little touches, an almost mystical confluence of writing, acting and directing, that resonate like a valley echo.

The actors know what's at stake here, and they rise to the challenge. "The Painted Veil," so unlike most pictures that get made today, only seems conventional. (And it didn't get made overnight: Norton, who is, with Watts, one of the movie's producers, and who studied Chinese history at Yale, worked for years to get it off the ground.) Watts plays Kitty with the right mix of sharpness and vulnerability. She doesn't play a character hit by a grand revelation; her transformation is seamless and believable. And Dryburgh knows just how to enhance the '30s-starlet quality of her carriage and bone structure: He lights her in a way that suggests the velvety glamour of George Hurrell photographs.

When I saw the trailer for "The Painted Veil," I winced as I listened to Edward Norton -- an actor whose work I generally like -- deliver one or two of his lines. He seemed overly stiff and mannered, even for a straight-arrow character; I wasn't convinced that this performance was going to be much.

But Norton's performance is expansive in a way that can't be captured in a trailer. Norton is an extremely formal actor, and even in contemporary roles, he has the quality of a time-traveler, as if he's been transported from an era you can't quite pinpoint. That serves him beautifully here. In an early scene, he appears on the doorstep of Kitty's family home, wearing a bowler hat; when he removes it, there's more forehead under there than you ever imagined -- it starts at the eyebrows and goes on forever. His Walter is a grave, thoughtful man, exactly the sort of fellow a woman could easily marry, only to begin wondering immediately what kind of boredom she's set herself up for.

Walter's burden is that he knows he's that kind of guy, and his awareness of that -- the way he pads into Kitty's bedroom on their wedding night, tentatively, in his slippers and meticulously pressed pajamas -- makes him far more vulnerable than Kitty is. In the course of the story these two people, husband and wife, are barely separate from each other for a day, and yet they have to go the long way around the world to find each other. "The Painted Veil" gives us a sense of the size of that world. And sends us home knowing that not even the big screen is big enough to hold it.