A hilarious collection of self-deprecating personals from the London Review of Books illustrates the gulf between high-minded Brits and Americans looking for love. 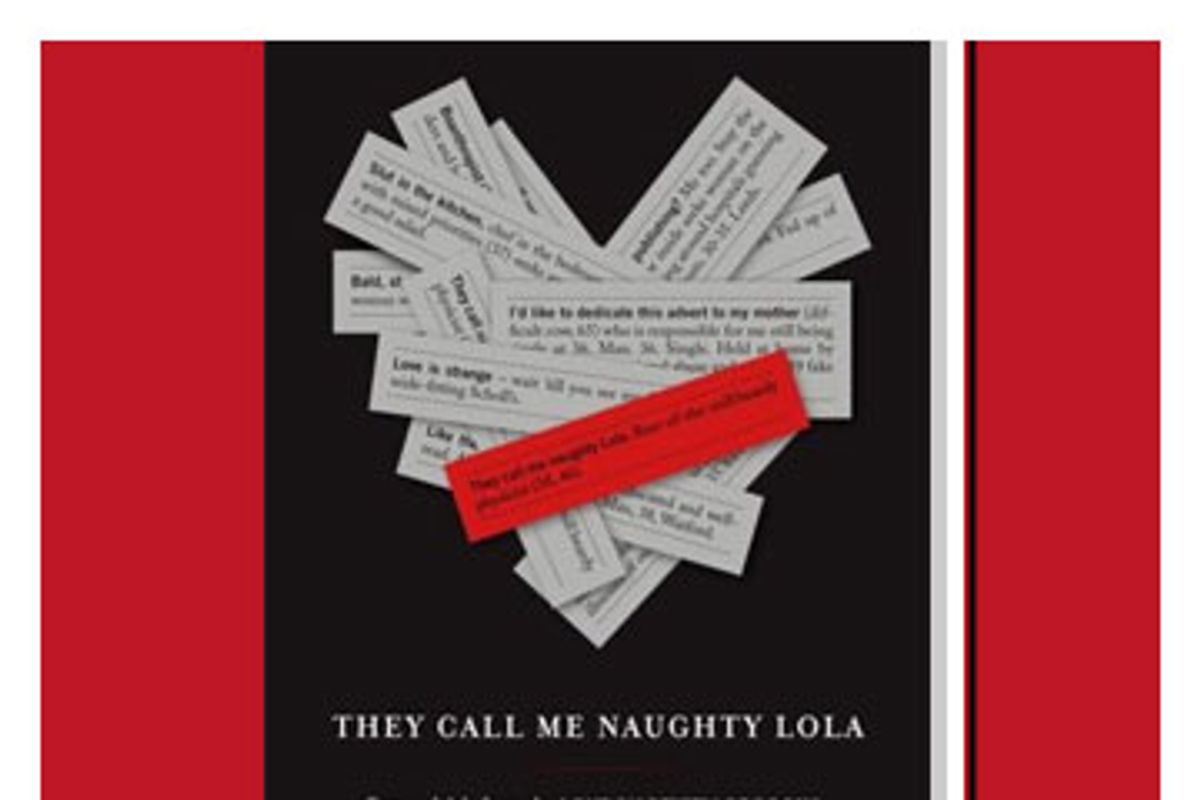 "SOMETIMES A POKER IS JUST A POKER. Austrian-born, Cambridge-educated philosopher/engineer/kindergarten teacher and published author (one book of philosophy, one of spelling) seeks companion/housekeeper adept at soup preparation and prepared to travel to Norway on a moment's notice. Must like: silence; dampness; impenetrable intellectual speculation; detective novels. Must despise: clarity; optimism; fellow academics. Age, race, gender unimportant. Respond ('Y' or 'N' only) to L. Wittgenstein, box 354."

If Wittgenstein could have listed a personal ad in the London Review of Books, would he still have died alone? No doubt he would have written a great one, since lonely-hearts listings are perfect examples of what he called "language games." Wittgenstein believed that language -- though imperfect -- was our only way of making sense of the world. Yet because language is incapable of expressing the essential truth of existence, we spend most of our lives playing language games, in which we adapt our use of language to the audience and milieu. Put differently: What we truly want from a personal ad can never be put into words, so what we're left with is a set of acronyms ("DJW ISO SWM") with a few hobbies attached. This is a language game par excellence.

Although the typical listing on Match.com may not merit literary criticism (much less the attention of professor Wittgenstein), the personals section of the London Review of Books has become a not-so-guilty first stop for lovers of wordplay, humor and the occasional philosophical reference. For example:

"My finger on the pulse of culture, my ear to the ground of philosophy, my hip in the medical waste bin of Glasgow Royal Infirmary. 14% plastic and counting -- geriatric brainiac and compulsive NHS malingering fool (M, 81), looking for richer, older sex-starved woman on the brink of death to exploit and ruin every replacement operation I've had since 1974. Box 7648 (quickly, the clock's ticking, and so is this pacemaker)."

Alluring, isn't it? What a relief to find a world of personal ads free of depressingly transparent self-aggrandizement! I mean, whom would you rather date, the typical "SWF: Attractive, fit, looking for similar," or this mysterious lady?

"This column reads like a list of X-file character rejects. Woman, 34, able to bi-locate and start fires with the power of her pre-menstrual tension. Seeks human/Jovian hybrid with whom to start genetic processing plant (Bicester). Must have own car. Box no. 5258."

The choice is obvious. And by the way, when was the last time you saw any variant of "menstrual" in the personals?

"They Call Me Naughty Lola" is a compilation of personal ads from the LRB, loosely organized by theme into chapters whose titles derive from opening lines such as, "I've divorced better men than you," and "Must all the women in my life take the witness stand?" Editor David Rose, the advertising director for the LRB, introduces the collection with a sense of compassion for his contributors, noting that they "are rarely inhibited by positive thinking and they don't tend to suffer the same degree of nervous overstatement found in other lonely-hearts sections." No, overstatement is not their problem. Self-deprecation is their forte. To wit:

"I've clutched my head in despair and wept like a little child," Rose admits, "wishing they could be more straightforward or at least toy with the idea of being conventional. But more often than not I'm glad of their eccentricity." Indeed, apart from a few Protestant splinter-group newsletters, how many other outlets are there for this gentleman:

"When you do that voodoo that you do so well, I invoke 16th-century witchcraft laws and have you burned at the stake. No shenanigans with Quaker M, 39, at box no. 2741."

The LRB began listing personal ads in 1998, 19 years after its founding. Perhaps the lag time explains how the LRB personals section was able to establish its voice in its very first published submission (from a man "on the lookout for a contortionist who plays the trumpet"): Its readership had already formed a community and been fully steeped in the combination of erudition and wit that sets the LRB apart from its peers. The only other "serious" periodicals that dare to leaven their Very Important Content with humor are the New Yorker (cartoons), and the Economist (surreal photo captions). If only some of our other venerable magazines would take the hint.

The LRB began as a stepchild -- stepsibling? -- of the New York Review of Books in what is one of the few examples of positive (or at least acknowledged) American contributions to the British literary sphere. Just as the NYRB was created to fill the book-review vacuum created by the New York Times strike of 1963, the LRB was born during the 1979 strike of the London Times and was first published as an insert to the NYRB. The two Reviews still have a lot in common, from their tabloid-size pages to their definitive, sweeping essays. They diverge, however, in their personals. "Every publication has its own particular tone and flavour," writes Rose, "and there are only two places where readers can effectively contribute to this: the letters page and the classified section. A lonely-hearts section is a column of reader contributions more than it is an advertising asset, and it's a mistake to homogenise it for the sake of additional revenue. There is a currency in lonely hearts that goes beyond mere numbers." One look at the personals in the respective Reviews and his point is proved.

Consider the example below from the NYRB. (In consideration of the actual advertisers, this is a composite. Real examples can be found at here.)

Get a load of those proper nouns. You can recognize a NYRB ad a mile away, with its combination of self-celebrating adjectives ("Vivacious, passionate") and uppercase place names ("Lincoln Center, Carnegie" [note the omission of "Hall" here; if you need to ask, you'll never know]), including, of course, "The Vineyard," a name so ubiquitous in NYRB ads one suspects its inclusion is now a requirement of posting. It is also painfully specific in its goals: Pity the "intellectual, nonsmoking, fit, successful, sophisticated, not fully retired, man" who has just turned, say, 68.

Now compare "Lithe, Lovely" with "Things I Won't Do For Love" from the LRB:

"Things I won't do for love include replacing corroding soil pipes and trepanning at home. Everything else is A-OK. Eager-to-please woman (36) seeks domineering man to take advantage of her flagging confidence. Tell me I'm pretty, then watch me cling, at box no. 3286."

There's something charming about her desperation -- perhaps its honesty? Name-checking trepanning doesn't hurt, either.

"Reply to this advert, then together we can face the harsh realities of my second mortgage. M, 38, WLTM woman to 70 with active credit cards. Box no. 8624."

Can it be possible that the relentlessly positive, "I-can-do-it!" attitude of NYRB readers accounts not only for the stylistic contrasts of their ads, but also for the gap in their salaries? Is Positive Thinking really that Powerful? Are the Seven Habits really that Effective? And what are the Seven Habits, anyway? Don't go looking for them in the LRB.

Though the LRB personal ads have resulted in a number of marriages (one failed), one birth and many friendships, Rose thinks that the LRB reader long ago gave up trying to advertise the best version of him or herself, "principally because it's tiring trying to figure out what other people find attractive." Is it ever. In his view, the LRB personal ads are simply "little flashes of silliness that brilliantly, if briefly, illuminate the human condition and all its attendant quirks and nonsenses."

Which brings us back, of course, to Wittgenstein. The antisocial Cambridge don would surely approve of the LRB personal ads. It was Wittgenstein, after all, who said that "a serious and good philosophical work could be written consisting entirely of jokes." If this is true, then "They Call Me Naughty Lola" may be the Philosophy Book of the Year. It would certainly take a genius to decode the meaning of:

Do you? Well, don't despair. Non-geniuses will also find their place and potential mates in the LRB. The eponymous Naughty Lola speaks for us all, doesn't he?