Robert De Niro's pic about one man's role in the birth of the CIA is all cloak and no dagger. 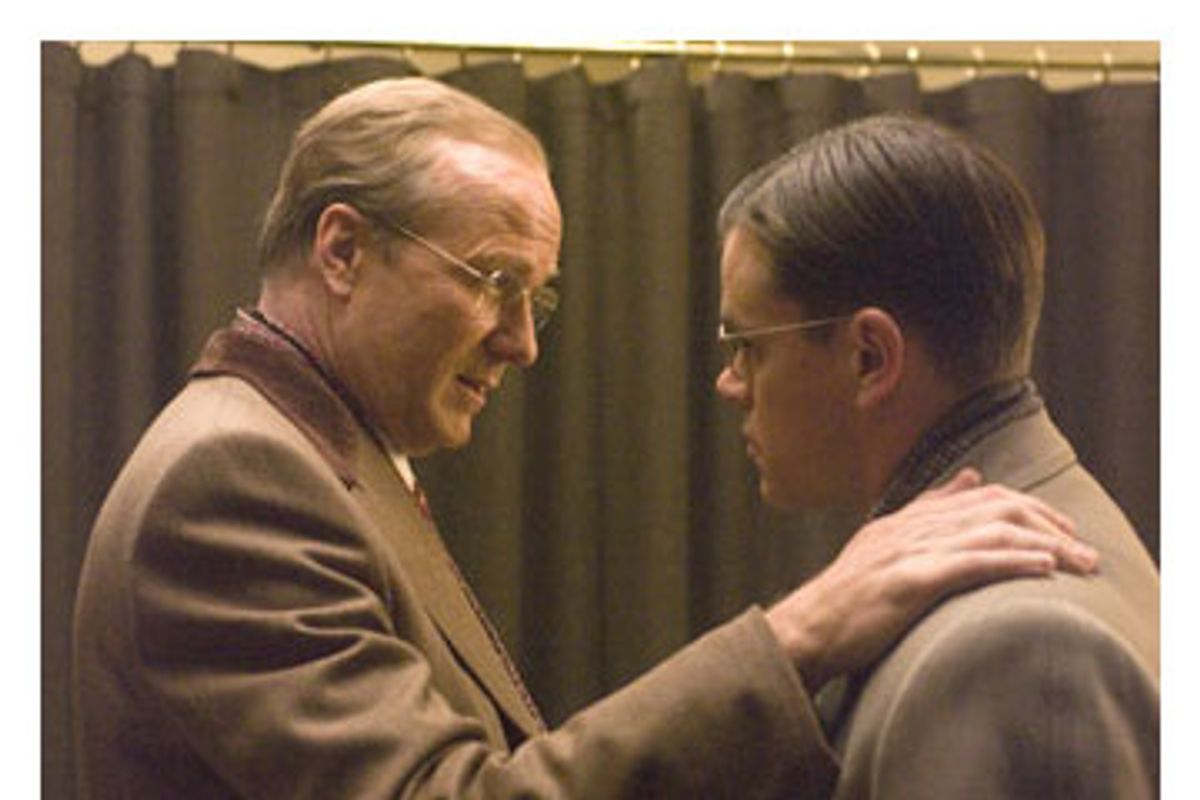 Sitting through boring movies is part of a critic's job, and it becomes second nature to forge ahead stolidly. But the first 20 minutes of Robert De Niro's "The Good Shepherd" were so dull -- so aggressively, brain-freezingly dull -- that I wondered how I'd make it through the remaining 140.

Thankfully, this elephantine epic, a fictitious saga (written by Eric Roth) detailing one man's role in the birth of the Central Intelligence Agency, gets slightly more interesting as it lurches forward -- either that, or the thing somehow lulled me into a state of drugged compliance. You can hear the movie's impending themes thundering through the forest before their massive heads even start poking through the trees, chief among them the idea that duplicitousness in the name of duty -- particularly when you're working for the U.S. government -- can poison not just your heart but your whole family. This is a somber, weighty, gray picture, one that pays clear tribute to the "Godfather" movies as it tries to scale some very rocky moral territory. But it's so unsatisfying to watch that even its biggest, most meditative right-and-wrong quandaries come to seem puny. De Niro can't sustain the necessary tension from scene to scene: The picture feels slack and wrinkled, even when, maybe especially when, it needs to be taut. And nearly all the characters -- not just the secretive, CIA-employed ones -- are so unformed and hard to read that it's tough to have an emotional stake in what happens to them. "The Good Shepherd," soft when it needs to be sharp, is all cloak with very little dagger.

We first meet the lead character, Edward Wilson (Matt Damon), in the early 1960s, around the time of the Bay of Pigs. He's one of those anonymous, vague-looking, bespectacled men who spend their nights hunched over a hobby table (he's expert at building little ships in bottles) and their days shuffling along long, underlit hallways with other men dressed just like they are, in plain, drab suits and shapeless raincoats. You just know these guys are up to no good, partly because one of them is played by William Hurt, who has grown into the No. 1 casting choice whenever a movie calls for a seemingly benevolent baddie. These men enter each other's offices and throw manila file folders on one another's desks; John Turturro skulks about ominously. The most exciting moments in the first 1/20th of "The Good Shepherd" involve dim, grainy footage of two people rolling around in bed, with a psych-ward drone on the soundtrack; my heart leapt at even these halfhearted David Lynch references -- at least they were something.

Then, through flashbacks, we learn that Edward is a Yale-educated lover of poetry who, thanks largely to his collegiate affiliation with the supersecret Skull and Bones society, found himself working first for the OSS and later for the organization that sprang from its loins, the CIA. The women who drift through Edward's shadowy life include a sassy debutante named Clover (Angelina Jolie, who jazzes up the movie considerably when she enters it, although the indistinctness of her role eventually grinds her down) and -- no fooling -- a beautiful deaf girl named Laura (Tammy Blanchard, who squeezes some sparks out of her blandly beatific character).

Edward never set out to be an operative; it just happened that way. But before long he becomes a favorite of the extra-secretive Bill Sullivan (played by De Niro), who will engineer what will become the CIA. The guy has some serious foot problems and ends up in a wheelchair; at a big Christmas party, filled with other sneaky-looking government guys, he gets wheeled right up to a baptismal font of eggnog, so you know he must be important.

Damon's Edward spends most of the movie struggling with his conscience, a state that Damon plays with an array of muted shadings: He gives a gently shaped performance in a difficult, oblique role. In fact, most of the actors here do pretty well, even when they're asked to deliver ridiculous Cold War-code dialogue. (Talking on the phone, or just in casual conversation, characters are given to uttering flat non sequiturs like "The best-laid plans of mice and men.") Michael Gambon and Alec Baldwin have small roles, and they whip the picture into a state of semi-liveliness whenever they're on-screen.

De Niro -- this is the first film he has directed since 1993's "A Bronx Tale" -- shapes some individual scenes beautifully (including several in which Edward's awkward love for his son, played by a young actor named Tommy Nelson, comes through so tenderly that you can't help feeling sympathy for both characters). De Niro seems to be good with actors but less successful at stringing a movie together, and keeping it together, scene by scene. He doesn't have good instincts about what to keep in and what to cut out: One interminable sequence features many, many close-ups of hairy masculine knuckles turning dials and fiddling with various surveillance thingamabobs. The whole picture has a dull, worthy sheen (it was shot by Robert Richardson, in gray-flannel-suit tones), and it sends us home stooped with the weight of its life-and-death questions. By the end, "The Good Shepherd" has us fully convinced of the banality of evil. But does it have to come dressed in clothes from Robert Hall?