It's not a wonderful life

Tired of chirpy carols and stale sugar cookies and your whole annoying family? Here's a delectably dark holiday TV viewing guide -- an antidote for anyone burned out on holiday cheer. 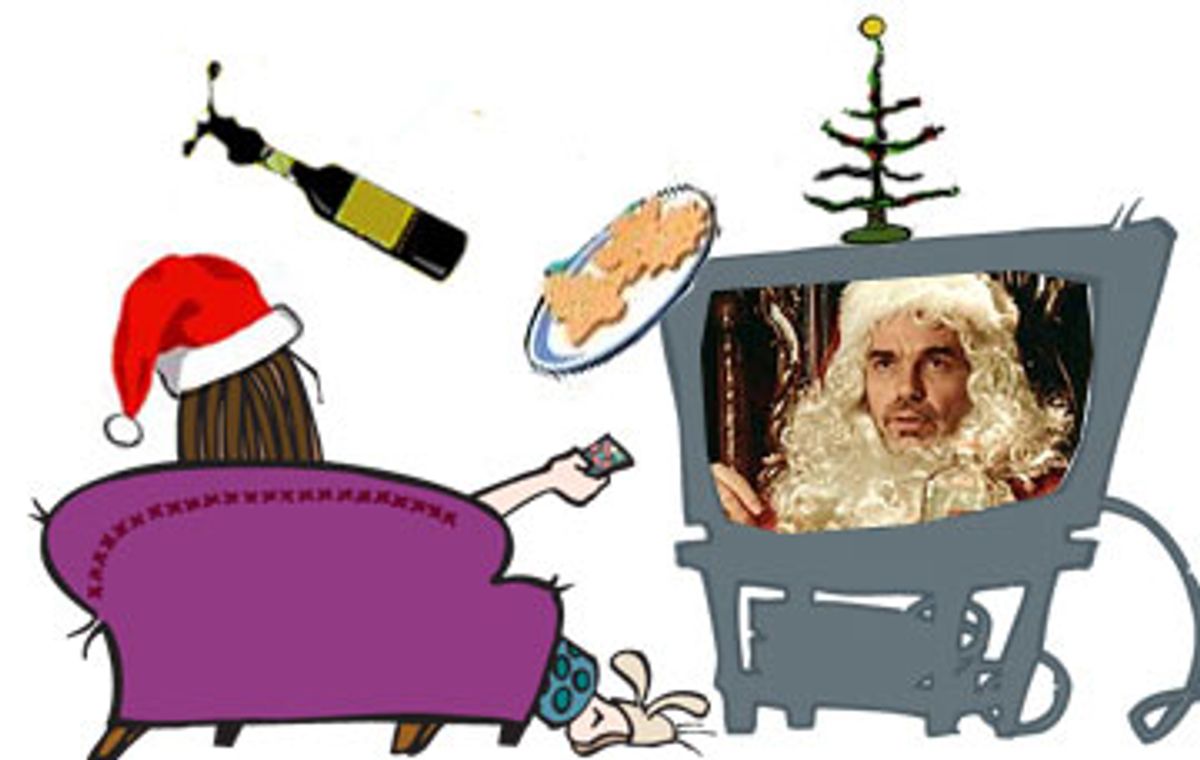 It's the crushing weight of enormous expectations that does most of us in during the holidays, the same force of nature that messes up the prom, most weddings and the vast majority of New Year's Eve celebrations. At the exact second when you're supposed to be full of love and generosity and gratefulness for each and every member of your extended family, that's when it suddenly strikes you just how deeply irritating and dysfunctional and intolerable they are. Add to that a week of shuffling around in dirty socks, listening to hopelessly cheery Christmas carols and eating unreasonable volumes of refined sugar, and you've got a recipe for the sort of flashy murder-suicide that would make an excellent Lifetime movie of the week.

Since you're not about to put down the chocolate-covered cherries or that bottle of red wine until sometime in the new year, the only way to avoid a teary-eyed, insult-hurling outburst that it'll take years of therapy to undo is to escape into an alternative reality that's almost as dark as your current one. So here it is, a holiday viewing guide for the whole dysfunctional family, one that gracefully sidesteps anything remotely wholesome or heartwarming, dodges any and all gratefulness and hand-holding, and veers recklessly into the realm of bad attitudes, heavy drinking, filthy sex, gratuitous violence and tragic endings, preferably peppered with a glib disdain for all that is sweet and lovely and joyful in the world. What could be more festive?

[Please note: Times listed below are Eastern Standard Time. On the cable channels in particular, times must be adjusted according to your time zone. You can check your local listings here or here.]

"Bad Santa," 9 p.m. on Comedy Central Billy Bob Thornton's Santa Claus swears, smokes, farts, grumbles and drinks to excess. It's not a flawless movie, but it's just what the doctor ordered after a long day of shuffling through the mall behind large herds of dimwitted teenagers, listening to an unconscionably bad rendition of "Jingle Bell Rock."

"Lemony Snicket's A Series of Unfortunate Events," 8:30 p.m. on Showtime Who wouldn't love a story for kids that starts right off the bat with the untimely death of their parents? Things get darker and more miserable from there, but somehow the kids I know treasure every tragic turn. (OK, I only know one kid, and he's kind of weird, but still...)

"Kath & Kim," 9:30 p.m. on Sundance This very strange Australian sitcom offers a well-timed reminder that there are, indeed, human beings on the planet who are even more tedious, tacky and tactless than your family. Fetching!

"Anthony Bourdain in Beirut," 8 p.m. on Travel Channel
What's darker than visiting a colorful, culturally dynamic city to sing its many praises, days before the bombs start raining down?

"One Punk Under God," 8:30 p.m. on Sundance
And you think you had a bad childhood! Ever wonder what it was like to be raised by Jim and Tammy Faye? Wonder no more: Son Jay Bakker is a true original, and despite his strange upbringing and his stubborn determination to make Christianity palatable to a hip, cynical generation, his charm and vulnerability throughout this incredibly revealing series is sure to surprise you. In this episode, Jay visits his mother, Tammy Faye, who's sick with cancer.

"Tom Brokaw Reports: In the Shadow of the American Dream," 8 p.m. on NBC
Brokaw investigates the effects of illegal immigration in the Roaring Fork Valley of Colorado between Aspen and Vail, where, according to an NBC press release, "thousands of Hispanics, mostly from Mexico" have moved to find construction jobs among a "historically white population." The press release explains that this hourlong documentary explores "what happens to American culture and America's laws when hundreds of thousands of people enter the country illegally." Hmm, let's see. The tacos get tastier? Sounds like a heaping helping of post-holiday xenophobia for the lily-white folks at home, worried their pretty Norman Rockwell painting is about to get Diego Rivera'd.

"Boondocks" marathon, 10:30 p.m. to 6 a.m. on Cartoon Network
What better follow-up to all of those scared, angry white people than a "Boondocks" marathon? This animated show, based on Aaron McGruder's cartoon strip with the same name, follows the misadventures of Huey and Riley Freeman, two black kids who leave the south side of Chicago to live with their crazy grandfather in the predominantly white suburbs.

"Team America: World Police," 10 p.m. on Showtime
If you missed this shameless, absurd and hysterically funny puppet-populated romp through the twisted minds of post-9/11 America by "South Park" creators Trey Parker and Matt Stone, well, there's no time like the post-holiday present. Just make sure any conservative, celebrity-obsessed, and/or easily offended relatives are within shouting distance, because nothing will solidify their notion of you as an irreverent, morally bereft, potty-mouthed whippersnapper like this insane film. A triumph! Four stars, eight (gay) lords a' leaping, and five opposable thumbs up!

"Confessions of a Dangerous Mind," 3:15 p.m. on AMC
After a week at home, you're more sure than ever that your mother is bat-shit crazy. Well, this movie, based on Chuck Barris' "unauthorized autobiography," will remind you what bat-shit crazy really looks like.

"All in the Family," 6 p.m. TV Land
What better time to spend an hour with the grumbliest, screechiest, angriest family of them all, the Bunkers? In the first episode, Archie tries to escape footing the bill for his mooch cousin Oscar's funeral, and in the second, Archie considers purchasing a gun to defend his home. Those were the days!

"Poisonous Women," 7 p.m. on Discovery Times An exploration of four different cases in which women poisoned their husbands and/or families. We can only guess that most of these crimes occurred during the holiday season.

"Big as Life: Obesity in America," 8 p.m. on Discovery Health Channel Yes, you'll probably gain your usual 5-8 pounds from eating nothing but cookies and bread for two weeks straight, but can you technically be labeled obese? This special will either reassure you that you're in the clear, or disturb you enough to keep you away from the cookie jar for the rest of your vacation.

"100 Greatest One-Hit Wonders," 8 p.m. on VH1 Hey, Nikki, you're so fine! Gloria, I think they got your numb-ah! I like Candy! Oh, oh, Sheila, let me love you 'til the break of dawn! Watch this VH1 special and find out why using a woman's name in your bad song often ensures that you'll only have one hit during your entire musical career.

"Giant Squid: Caught on Camera," 10 p.m. on Discovery Channel
What could possibly appeal more to someone who's spent the entire week lazing about the house in soft pants than a show about a giant squid?

"Countdown to Doomsday," 11 p.m. on SciFi Channel
What will cause Earth's next mass extinction? A supervolcano? A giant solar flare? An alien invasion? An asteroid impact? A machine rebellion? Join bright-eyed, bushy-tailed host Matt Lauer for this delightfully upbeat look at the death of humankind. It's the end of the world as we know it, and Matt Lauer feels fine!

"Reno 911" marathon, 6 p.m. to 9 p.m. on Comedy Central
Let me guess: You've always wondered whether this show would make more sense to you if you saw more than part of one very strange episode. Well, here's your chance to find out!

"That '70s Show" marathon, 6 p.m. to 9 p.m. on FX
Let me guess: You've always thought this show sucked, but you've never seen more than half of an episode. Well, it doesn't suck at all, and now you'll finally have a chance to find out why!

"I Shouldn't Be Alive," 7 p.m. on Discovery Channel
You probably shouldn't be alive, either, after all that eggnog, so you might be in just the right mood for this story of two fathers and their sons on a disastrous trip to Mexico. A storm sets in, and they're forced to ditch their plane at sea! And you thought just dragging a tree into the house with your dad was a challenge...

"Peep Show," 9:30 p.m. on BBC
When holiday fatigue sets in, nothing is quite as nice as a bunch of snippy young horndogs with British accents.

"Up Close and Dangerous: Orcas, Black Bears and Grey Reef Sharks," 8 p.m. on Animal Planet
With the end of the holidays in sight, you may not be in the mood to exercise, eat green vegetables, or consider how much work you'll have when you get back to the office, but I know you're in the mood to watch "Killer Whales snatching Sea Lions from a beach in Patagonia."

"Saw," 10:15 p.m. on Showtime
Not a fan of disgusting horror movies? Well, then you'd better skip this indie gross-out slasher flick. But hey, it might keep that obnoxious teenage nephew of yours occupied long enough for you to borrow his Game Boy...

"Shallow Grave," 9 p.m. on IFC
If sipping champagne makes your head hurt and New Year's Eve countdowns leave you cold now that Lawrence Welk and Guy Lombardo are no longer around, why not tune in for Danny Boyle's first film about a bunch of greedy, self-centered jerks whose narcissism leads them down the road to ruin? Populated by hateful characters and littered with gratuitous violence, this film is dark enough to wash away the holidays' sugary aftertaste indefinitely.