Coal in the stocking

So what's the cruddiest gift you got? In honor of the holiday, the members of Salon's community, Table Talk, share their trashiest treasures. 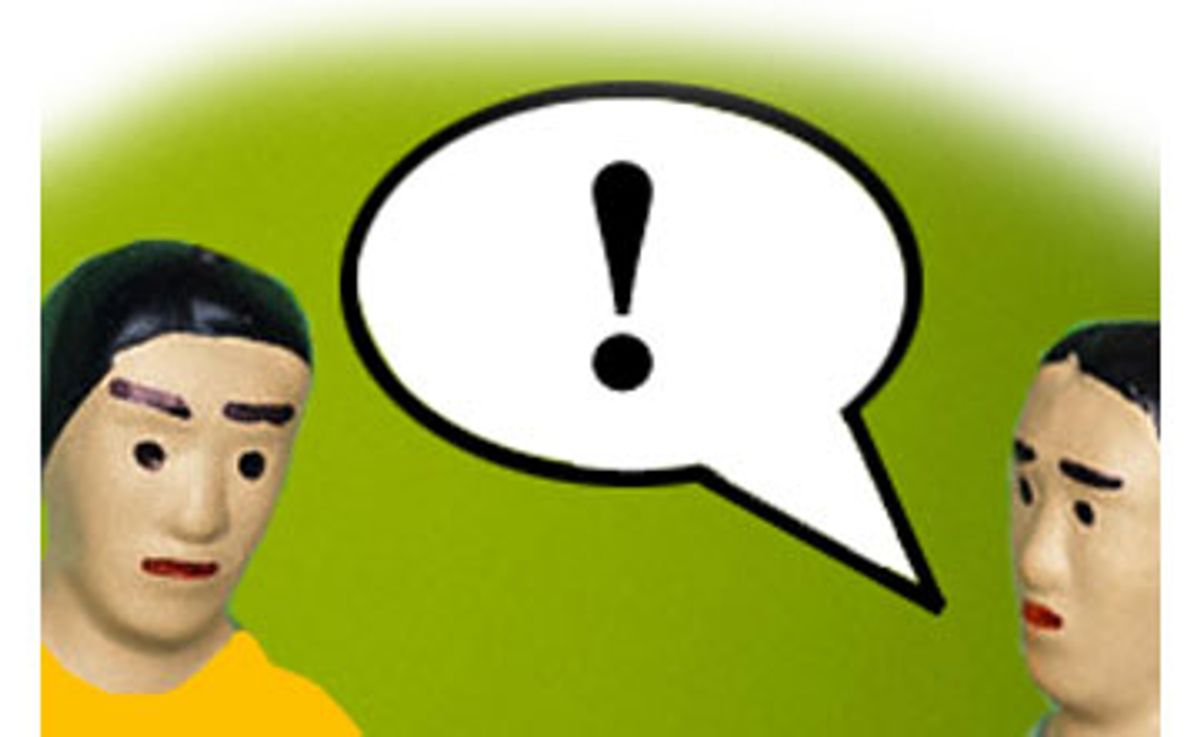 Cheesy Gifts and the People Who Give Them

It's that time of year again? What did those billionaire in-laws regift this time? Christmas-carol-playing underwear? The Fritz the Cat Collection on Beta? Half-eaten fruitcake?

Okay then! Who should I give my "Big Mouth Billy Bass" to? He sings two songs, one a Bobby McFerrin top 40 earworm, the other is "Take Me to the River."

The hands-down cheesiest gift I ever received was from my in-laws, who were returning from some tropical vacation. They brought back with them a bit of local handiwork: a two-liter soda bottle with a coathanger inserted through the cap, holding a fake bird perched inside. The label of the bottle had been removed and replaced with stripes of brightly colored tape. Long, scalloped, curved cuts had been made at half-inch intervals along the length of the bottle, which allowed the plastic to be bent outward to act as wind vanes. The bottle would spin in the wind, the fake bird swinging around wildly.

This was so insanely, ingeniously kitschy that I couldn't help pulling it out of the closet a few years later and regifting it to my own parents.

When in college, I received a birthday package in the mail from my grandmother, who's notorious for Weird-Ass Gifts. Inside the box were:

So I called my mother to tell her I got cheese for my birthday.

Mom: "You mean those specially wrapped kinds of cheese, like for CARE packages, that don't need to be refrigerated?"

Me: "No. Just a big hunk of mild cheddar from the dairy case. Store-brand. Floating in its own oil, since it's been in overheated mail trucks for a week."

Since we're discussing grandmas who give strange gifts.

When I was 16 my grandmother sent me the following (I swear):

A plain white blouse such as a Catholic schoolgirl would wear (i.e., no ruffles, no decoration of any kind, just a plain white, short-sleeved, stiff shirt).

A framed picture of her.

A huge bag of maxi pads. (She later explained to my mother that she thought I might need an extra supply to keep in my locker at school for emergencies.)

Ha! My grandmother has also been the queen of cheesy-ass gifts. I'm not sure how to describe the cheesiest:

There was a clear box. Inside the box, there were several fake flowers and clear plastic wires. When you turned the music box on, there were rotating colored lights and the flowers and wires lit up. The music? Für Elise.

I wrote a thank you card, but I have no idea how I phrased it.

The cheesiest gift I ever got was from a former student when I taught English in China. A lot of the kids gave me little teacher gifts at Christmas and this boy (around 10 years old?) obviously hadn't realized some people would bring gifts (Big Gifts, like designer lipsticks that their posh parents bought at duty-free) and wanted to give me something. This was a boarding school, so he couldn't exactly run out and buy something for the next class. So during his lunch break he wrapped up something of his own, that he loved, and gave it to me.

It was an electronic mosquito repeller, shaped like a race car. You plug it in and insert these noxious, chemically soaked blue pads and it wards off the sparrow-sized mosquitos. He'd even left the half-used chemical pad in it, and I could tell by the caked-on chemical residue that he'd been using his little race car for quite some time.

It was really quite ugly, but I used it religiously for the next four years and it always had a place of honor in the living room. Even SO (who doesn't get kitch, or my love for it, at all) came to have fond feelings towards it.

I remember when I was eight or nine, I found out about model rockets and thought that they were the most wonderful thing ever, and desperately wanted a kit. I told my mother this. So what did I get for Christmas that year?

A model rocketry catalog. And no, there was no "you can choose what you want from here, up to X dollars." Just "Here's a catalog. If you want something, buy it yourself."

But, hey, it was better than the year I got from her, for Christmas, a check. With a stop payment on it. And I carried that catalog around for months, dreaming of rockets.

When Lucy was a baby, we got a wildly tacky BABY'S FIRST CHRISTMAS 1999 ornament. Oh and Lucy was born in 2000. It's like that.

I was once in a relationship where I was given corrective gifts for every Christmas and birthday.

I was given hunter green crystal drop earrings because "you don't wear things that really suit you and green is a perfect color for you."

I was given large brown backpack for a purse because "only ditsy old ladies carry purses like the one you have."

I was given a canoe trip down the local river because "you really need to get outdoors more."

I finally got the hint that I was not acceptable without some major adjustments, and left.

No, it was the year she wrapped up and handed me a Coldwater Creek catalog and what she told me was a "gift certificate" so I could pick something out. When I went to use it, I looked at the "Gift Certificate" and realized it was one of the coupons they send you for free with the catalog -- $25 off your next $100 purchase. Really, giving me nothing would have been better.

One year, my sister-in-law sent us a scarf, with the local university colors after we moved to a different state. (Iowa, yellow and black, for the curious). It was a decent woolen scarf, until we unfolded it and saw how delicious the moths had found it, for they had been very busy nibbling.

One year my grandmother bought me some "retiree jewelry" for Christmas when she was living in Florida. Not really like her, but for some reason she thought I'd like them. I was in my mid-20s at the time. There was a carved wooden parrot hanging off the side of a wooden bead necklace. The other was a triple-strand of obviously fake gold loops and plastic shell-shaped beads. What the in crowd at the early bird buffet wears. But I didn't get rid of them for some reason and now, when I come across them, I'm so glad I kept the ugly things for the wave of humor/nostalgia they bring.

A friend's grandma lived in the same city as my friend and I went to university. I came home one day to find a massive, massive amount of asparagus on my front porch. I did go to school in prime asparagus-growing territory, but that didn't make it any less strange.

Turns out my friend's grandma had a friend who grew it and she just sort of wanted to share the wealth. She knew her granddaughter didn't cook, and she knew that I did, I guess. So I got the asparagus. No note though. Just asparagus on the porch. It took quite some time to figure out where the hell it had come from!

We got a big ol' box of presents from my mom yesterday. I love her dearly, but we parted ways in matters of taste long, long ago. The only thing I opened (everything else was gift-wrapped) was a little box for her unborn grandchild. It contained a "porcelain" figure of a little boy with big eyes and long eyelashes, holding on to a cartoony cross for dear life. He's also wearing a little "silver" rosary in some sort of plastic -- it isn't of the same material as the rest of the figurine, so sort of floats free. I turned to DH and said, "I look too much like my parents to be adopted, don't I?"

My MIL gave us a faux "precious moments" nativity set. I don't know what to make of it; I think one of the wise men is a hedgehog.

Unfortunately, the children love it. Ask to play for it, even when it isn't Christmas. I don't understand.

I opened the expected bag of random stuff Mom always sends me that she "allows" me to open when the gift package gets here (I am always forbidden to open the other presents until Xmas). This bag is usually a hodgepodge of makeup samples (some used), giveaway calendars (three this year), informational pamphlets on health and nutrition, costume jewelry she doesn't want anymore, and other assorted crap.

This time it included a rubber-banded bundle of cheap-ass advertising giveaway Bic Stic ballpoint pens and a chain of safety pins. It's like she cleaned out her junk drawer and sent it to me.

We sent the bag of 30-year-old used pencils back to the goofy relative who mailed it to us two years ago. I feel good about that.