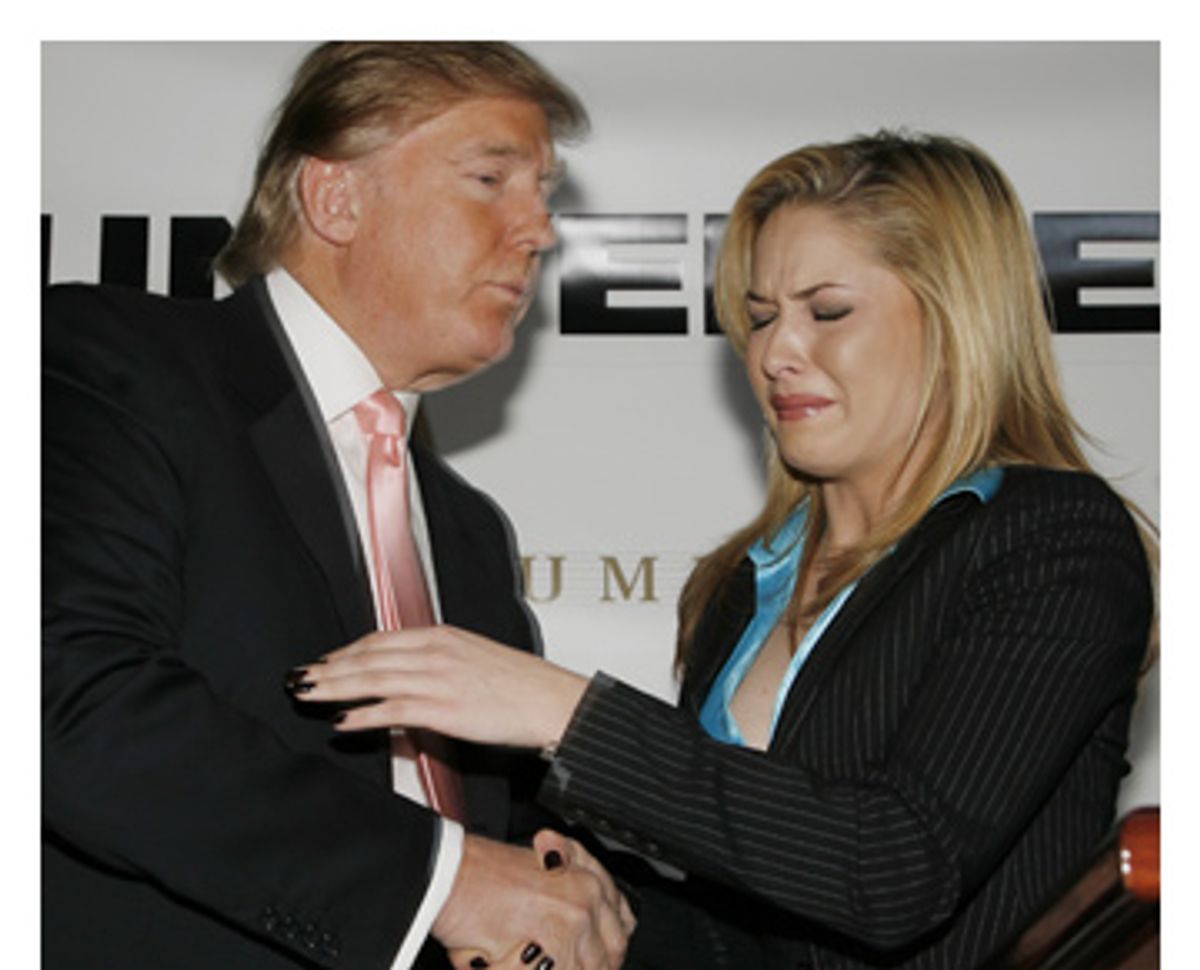 2006 may well be remembered as the year of the out-of-control starlet, and the world of beauty pageants has not found itself exempt from this phenomenon. For the past week, people have been asking me what I thought about the firestorm of publicity surrounding Miss USA. That's fair; when a pageant-related scandal makes news and there's a Miss America in the room (1998, in my case), I usually get the nod. Even among those who loathe the very idea of beauty pageants, a morbid curiosity is stirred by the annual anointing of an "ideal" by the various organizations -- and glee when she fails to live up to expectations. But I've been hesitant, mostly because people are looking for a quick and dishy comment, not my personal manifesto on the dangers of being a young role model in an age of celebrity worship.

Granted, it's tough to say anything terribly specific. I mean, really: Salacious rumors aside, does anyone actually know what Tara Conner did wrong? Once the Trump publicity machine hocus-pocused some allegations no one had really heard about into a full-scale media blitz, we were all along for the ride to the eventual teary press conference. It offered a stunningly pretty girl and not much clarity. At a basic level, I couldn't completely relate to Conner's experience. Issues of virtue aside, it would be pretty impossible for any Miss America to get into the kind of trouble Conner apparently did: She's not living in Trump Tower, she doesn't have much free time, and her grass-roots schedule keeps her bouncing to such hot spots as Oblong, Ill., and Greenville, S.C., with an eagle-eyed chaperone. You'd have to make a hell of an effort to make crown-endangering choices.

That this scandal should erupt in the waning hours of 2006, though, is something I find very easy to understand. After all, isn't it appropriate that this year's big pageant-related story reportedly involves illegal drugs, copious underage drinking and allegations of some pretty nontraditional public sexual conduct? In a year that saw several of our young female cultural icons leave their underwear at home, get arrested for DUI, publicly struggle for sobriety while still under the legal drinking age, and make questionable decisions that would seem to indicate the impaired judgment that accompanies drug use, should we be shocked that Trump's 20-year-old icon of loveliness might have also seen fit to get her hands dirty at some New York nightclubs? Should Tara Conner, famous for a swimsuit competition, really be judged more harshly than Paris Hilton, famous for a sex tape? Yes, of course, the major pageants claim they are choosing a winner who represents what America values in women (or, in the case of Miss USA, what Donald Trump values in women). But increasingly, I wonder whether we're sure we know what those values are.

I watched the Miss USA Pageant last year, and I picked Tara Conner to win the moment I saw her head shot. She won because of her charisma, and because she was hands-down the most smoking-hot girl on the stage. She didn't win because of her intellect, or her virtue -- that's what she's being judged on now, but it wasn't then. And that's the real issue; it's not what Conner did or did not do, but that what we honor has changed so much from what we used to. I think that the reaction to this story has a lot to do with the public realization that if this has become sanctioned behavior from a so-called ideal young woman, then the bar has indeed gotten pretty low. Even if Conner did everything she has been accused of -- which is most likely a grave exaggeration of her misbehavior -- she could not be called an atypical young adult. Remember when "The Real World" taught us about AIDS? Now it teaches us about threesomes in hot tubs. And one need look no further than the sexually charged Internet photos of newly fired Miss Nevada USA for confirmation that our teenagers are indeed internalizing the girls-gone-wild culture they're being offered.

In years past, it was up to our national icons to set examples for us on how to live. But these days, who knows who they are? The president, who holds on for dear life on the red side of the cultural divide? Hollywood stars, whose curious lives don't seem to represent very many Americans at all? Professional athletes, who, when they're not being suspended by the fistful for on-court brawls, are getting arrested for an endless stream of misdemeanors or becoming tangled in the ever-expanding web of steroid investigations? Or pageant contestants, who often sign up for a competition having no idea what they're actually getting into if they win?

Like Tara Conner, I was 20 when I won my national title, and trying to live up to the history and expectations of Miss America triggered an identity crisis that is difficult to explain. There is no doubt that she made some bad choices, but this is certainly a burden that could drive a girl to act out. But is it fair to judge her so harshly for behavior that, when employed by far more famous celebrities, is often rewarded?

I wouldn't want to be in Conner's shoes for the balance of her reign, but neither this scandal nor MADD's dumping of Miss Teen USA will spell doom for the Miss Universe Organization. Nor will it mean that people stop watching pageants -- last year's "Miss America" finals attracted more than 22 million different viewers over the course of several airings, even though it was downgraded from network television to CMT, a cable network not available in all areas. But what might be worth considering in Conner's unfortunate situation is that we are a country running perilously low on heroes. We desperately need someone (Barack Obama?) to capture our national imagination. Otherwise, we'll be stuck where we were in 2006, with our moral barometer guided by woozy starlets bouncing from club to club sporting short dresses and bikini waxes that we really don't want to see.