The first major Democratic '08 contender throws his hat in the ring from the Crescent City's devastated Ninth Ward. 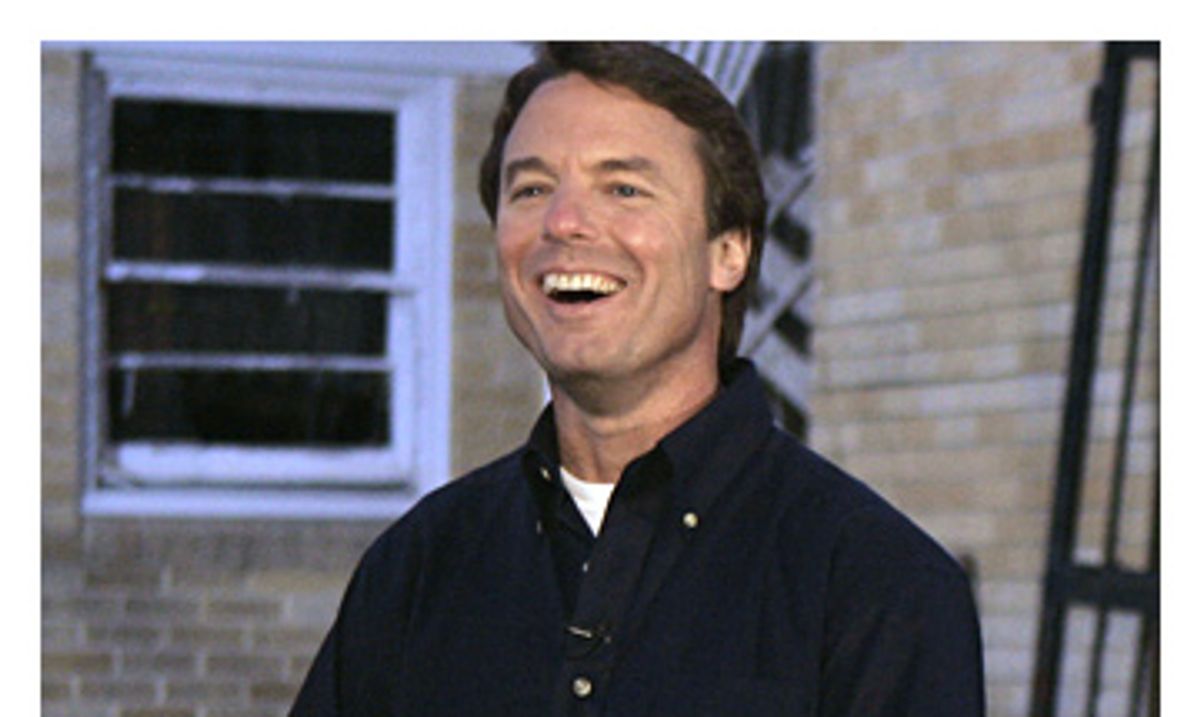 Sixteen months after Hurricane Katrina, many of the street signs are still down in the hard-hit Ninth Ward of New Orleans, but it wasn't hard to find former Sen. John Edwards there on Thursday morning. The satellite dish of the CNN Gulf Coast Bureau truck was a beacon for reporters trying to pick Orelia Tyler's house out of all the other gutted houses with FEMA trailers parked outside.

So was the mere presence of a crowd. In this nearly deserted swath of the city, where few locals have returned and screen doors dangle from abandoned houses, a gathering of more than three people is pretty conspicuous. At least 40 people, mostly members of the media, had converged on the house on Stemway Drive to hear the fresh-faced ex-trial lawyer from North Carolina announce his bid for the Democratic nomination for president. Outgoing Iowa Gov. Tom Vilsack and Ohio Rep. Dennis Kucinich are already on the campaign trail, but with Hillary Clinton and Barack Obama not expected to signal their intentions until early next year, Edwards is the first high-profile Democrat to make it official.

"It's a symbol of two Americas," said Edwards, explaining why he'd chosen the Ninth Ward as the backdrop for his announcement. "Something I feel very personally." Echoing the same themes of poverty and inequality he introduced as a 2004 presidential candidate on the eve of the Iowa caucuses, Edwards, dressed in blue jeans and a work shirt, proposed an extreme makeover for the country, one that would start with "grass-roots, ground-up efforts," like those of the often faith-based volunteer groups he has witnessed in New Orleans.

In addition to reiterating his well-established antipoverty agenda, Edwards laid out a progressive platform that addresses issues such as global warming, the removal of troops from Iraq, universal health coverage and "getting America off its oil addiction." Edwards plans to present that platform over the next three days in six states, including Iowa, which he almost carried in 2004 and where early polls consistently show him running strongly. (He got an unexpectedly early start on his campaign swing on Wednesday, when his official campaign Web site briefly went live ahead of schedule.)

Edwards has been twitted on the right for feeling the pain of one America while living in the other. A recent New York Post article said his North Carolina estate "makes the famed Kennedy compound look like a seaside cottage." But Edwards, who had spent Wednesday afternoon shoveling dirt in the same yard with volunteers from his "One Corps" group, was pursuing an antipoverty agenda before he was a vice presidential candidate in 2004, and long before Katrina.

His message Thursday also emphasized self-reliance, both for individuals and for the country as a whole. "I think that's why I'm in New Orleans, to show what's possible," he said. "This is an example of what all of us can do. Instead of sitting at home and complaining, we take action -- not just after the election. We take action now."

Even in New Orleans, where a sort of poverty pornography has taken hold over the last year and a half -- everyone from Brad Pitt to Juvenile has paraded through to pimp their pet projects -- "people feel forgotten," Edwards said. He urged Americans to "get their hands dirty."

The bustle of rebuilding, so palpable in other parts of the city, is hardly evident in the Ninth Ward. One particularly notable indication of the stalled recovery is the nearly total absence of advertising, save for a few signs offering the services of demolition crews and trial attorneys. The lack of organized activity of any kind is so startling that the 20 or so kids standing behind the senator as he made his announcement, each clad in bright blue "One Corps: John Edwards" T-shirts, actually inspired as much of a sense of order as did the National Guardsmen still on duty in the area.

"We've seen what happens when we wait to see what the government is going to do for us," Edwards said. "It's not like we don't know what needs to be done -- this isn't rocket science. We can't wait for someone else to do something for us. There's just too much at stake."

Making a seamless transition from Katrina to Iraq, Edwards added, "We have to show that we have the moral authority to lead -- we can't lead on raw power. We need to set an example. We're not the only ones who saw the photos of New Orleans after Katrina. The whole world saw them. When America doesn't lead, there is no stability. We need to maintain our power -- but we also have a responsibility to show our "better angels."

Asked whether he hoped to shift the playing field away from the Clinton/Obama battle, Edwards said, "I hope the entire earth shifts in a different direction. I hope someone is running because they want to serve. I want the best human beings possible to run. But change has nothing to do with candidates -- it has to do with getting Americans involved."

Steve Medlin, a former law school classmate of Edwards' at the University of North Carolina, looked on from behind the news crews, smiling. Medlin was visiting from Concord, N.C., with his three sons, two of whom are Marine sergeants who did yearlong tours in Iraq.

"This is one of the finest men I know in the world," Medlin told Salon. "I was so happy when he ran for senator, because he was a fellow everyone knew was an honorable, straight-up guy." Comparing Edwards with Al Gore, another good-looking ex-senator from the South and possible 2008 contender, Medlin offered, "Al Gore came across as so sanctimonious ... Johnny's not gonna lecture anybody. Does he have a chance? Absolutely. Obama is premature. Hillary's negatives are phenomenal. He's gonna slide right in."

The only time Edwards came even close to a negative tone was when he was asked about his lack of experience. "It's a fair question," he allowed, and certainly one he was prepared for. "Look at [Donald] Rumsfeld and [Dick] Cheney," he said. "Both of them had extraordinary experience -- but we've seen that experience does not equal good judgment, and experience is not the same as having a vision, and experience does not guarantee adaptability. We've seen absolutely no capacity to adjust, to move with the world's changes."

But Edwards, perhaps in an attempt to appeal to Southerners and moderates, seemed to put limits on what any president, and the federal government in general, should be expected to do. Nevertheless, he criticized President Bush for his failure to respond to Katrina.

"If I'd have been president, I would have had someone coming in my office every day, and I would have asked him, "What did you do yesterday? What do we need to do today?"

And he urged people to look beyond the government for solutions. "We don't want to hope that the next leader of America will solve all of our problems."

Again and again, he returned to what could be done by the kinds of private organizations often touted by the current administration. "I've walked around New Orleans and I've seen a lot of good work being done, and most of it has been by faith-based, charitable organizations and volunteers."

Such sentiments, and the scattered projects of faith-based organizations, were probably cold comfort to local residents who were hoping for something a little more tangible. Cathy Roberts, a Ninth Ward resident whose house was also destroyed by the floods, had walked over to Orelia Tyler's house to see who had won the latest media-attention lottery. Eyeing the camera crews around her, she said, "I get so angry when people tell me I ought to call Oprah, or Ellen, to try to get some help rebuilding my house. But I can't even find Internet service, how am I supposed to find them?"

Although Roberts says she paid almost $200,000 for her home, Louisiana's Road Home program valued it at only $160,000 -- and offered her $88,000 to rebuild it. "How do you do that math?" she asked. Before the cameras were turned off, a group of volunteers went busily back to work on her neighbor's house. But Roberts didn't approach them to ask for help. "I don't need extra hands, baby," she said. "What I need is money."