Saddam: The death of a dictator

Through the bumbling of the U.S.-backed regime, justice becomes revenge, and a despot becomes a martyr. 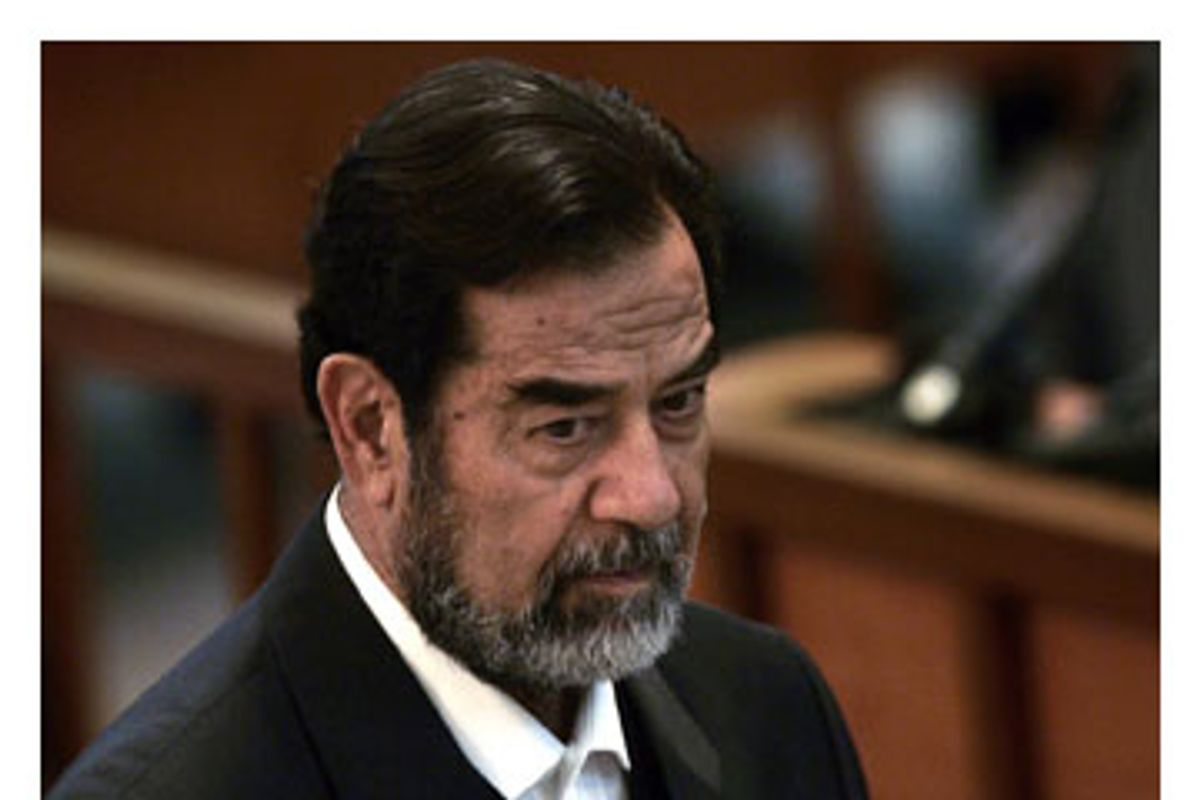 The body of Saddam, as it swung from the gallows at 6 a.m. Saturday Baghdad time, cast an ominous shadow over Iraq. The execution provoked intense questions about whether his trial was fair and about what the fallout will be. One thing is certain: The trial and execution of Saddam were about revenge, not justice. Instead of promoting national reconciliation, this act of revenge helped Saddam portray himself one last time as a symbol of Sunni Arab resistance, and became one more incitement to sectarian warfare.

Saddam Hussein was tried under the shadow of a foreign military occupation, by a government full of his personal enemies. The first judge, an ethnic Kurd, resigned because of government interference in the trial; the judge who took his place was also Kurdish and had grievances against the accused. Three of Saddam's defense lawyers were shot down in cold blood. The surviving members of his defense team went on strike to protest the lack of protection afforded them. The court then appointed new lawyers who had no expertise in international law. Most of the witnesses against Saddam gave hearsay evidence. The trial ground slowly but certainly toward the inevitable death verdict.

Like everything else in Iraq since 2003, Saddam's trial became entangled in sectarian politics. Iraq is roughly 60 percent Shiite, 18 percent Sunni Arab and 18 percent Kurdish. Elements of the Sunni minority were favored under fellow Sunni Saddam, and during his long, brutal reign this community tended to have high rates of membership in the Baath Party. Although many members of Saddam's own ethnic group deeply disliked him, since the U.S. invasion he has gradually emerged as a symbol of the humiliation that the once-dominant Sunni minority has suffered under a new government dominated by Shiites and Kurds.

Saddam was a symbol of Sunni-Shiite rivalry long before the U.S. occupation. In 1991, while he was in power, he had ferociously suppressed the post-Gulf War Shiite uprising in the south, using helicopter gunships and tanks to kill an estimated 60,000. After the invasion, many Shiites wanted him to be captured, while many Sunnis helped him elude capture. When Saddam was finally caught by U.S. forces in late 2003, Shiites in the Baghdad district of Kadhimiya crossed the bridge over the Tigris to dance and gloat in the neighboring Sunni Arab district of Adhamiya, provoking some clashes. After his capture, students at Mosul University, in Iraq's second-largest and mostly Sunni Arab city, chanted, "Bush, Bush, hear our refrain: We all love Saddam Hussein!" and "We'll die, we'll die, but the nation will live! And America will fall!"

As the U.S. consolidated control over Iraq, meanwhile, Sunni alienation increased. The American occupiers adopted punitive measures against members of the Baath Party, who were disproportionately though by no means universally Sunni Arab. The army was dissolved, sidelining 400,000 troops and the predominantly Sunni officer corps. Thousands of Sunni Arab civil servants and even schoolteachers were fired.

A "de-Baathification" committee, dominated by hard-line Shiites like Nouri al-Maliki (now prime minister) and Ahmed Chalabi, denied large numbers of Sunni Arabs the right to participate in political society or hold government positions on grounds of links to the Baath Party. Sometimes politicians were blackballed simply because a relative had been high in the party.

By the time of Saddam's trial, sectarian strife was widespread, and the trial simply made it worse. It was not just the inherent bias of a judicial system dominated by his political enemies. Even the crimes for which he was tried were a source of ethnic friction. Saddam Hussein had had many Sunni Arabs killed, and a trial on such a charge could have been politically savvy. Instead, he was accused of the execution of scores of Shiites in Dujail in 1982. This Shiite town had been a hotbed of activism by the Shiite fundamentalist Dawa (Islamic Call) Party, which was founded in the late 1950s and modeled on the Communist Party. In the wake of Ayatollah Ruholla Khomeini's 1979 Islamic Revolution in neighboring Iran, Saddam conceived a profound fear of Dawa and similar parties, banning them and making membership a capital crime. Young Dawa leaders such as al-Maliki fled to Tehran, Iran, or Damascus, Syria.

When Saddam visited Dujail, Dawa agents attempted to assassinate him. In turn, he wrought a terrible revenge on the town's young men. Current Prime Minister al-Maliki is the leader of the Dawa Party and served for years in exile in its Damascus bureau. For a Dawa-led government to try Saddam, especially for this crackdown on a Dawa stronghold, makes it look to Sunni Arabs more like a sectarian reprisal than a dispassionate trial for crimes against humanity.

Passions did not subside with time. When the death verdict was announced against Saddam in November, Sunni Arabs in Baquba, to the northeast of the capital, staged a big pro-Saddam demonstration. They were attacked by the Shiite police that dominate that mixed city, who killed 20 demonstrators and wounded a similar number. There were also pro-Saddam demonstrations in Fallujah and Mosul. Baghdad had to be put under curfew.

The tribunal also had a unique sense of timing when choosing the day for Saddam's hanging. It was a slap in the face to Sunni Arabs. This weekend marks Eid al-Adha, the Holy Day of Sacrifice, on which Muslims commemorate the willingness of Abraham to sacrifice his son for God. Shiites celebrate it Sunday. Sunnis celebrate it Saturday - and Iraqi law forbids executing the condemned on a major holiday. Hanging Saddam on Saturday was perceived by Sunni Arabs as the act of a Shiite government that had accepted the Shiite ritual calendar.

The timing also allowed Saddam, in his farewell address to Iraq, to pose as a sacrifice for his nation, an explicit reference to Eid al-Adha. The tribunal had given the old secular nationalist the chance to use religious language to play on the sympathies of the whole Iraqi public.

The political ineptitude of the tribunal, from start to finish, was astonishing. The United States and its Iraqi allies basically gave Saddam a platform on which to make himself a martyr to Iraqi unity and independence -- even if by unity and independence Saddam was really appealing to Sunnis' nostalgia for their days of hegemony.

In his farewell address, however, Saddam could not help departing from his national-unity script to take a few last shots at his ethnic rivals. Despite some smarmy language urging Iraqis not to hate the Americans, Saddam denounced the "invaders" and "Persians" who had come into Iraq. The invaders are the American army, and the Persians are code not just for Iranian agents but for Iraqi Shiites, whom many Sunni Arabs view as having Iranian antecedents and as not really Iraqi or Arab. It was such attitudes that led to slaughters like that at Dujail.

In his death, as in his life, Saddam Hussein is managing to divide Iraqis and condemn them to further violence and brutality. But the Americans and the Shiite- and Kurd-dominated government bear some blame for the way they botched his trial and gave him this last opportunity to play the spoiler.

Iraq is on high alert, in expectation of protests and guerrilla reprisals. Leaves have been canceled for Iraqi soldiers, though in the past they have seldom paid much attention to such orders. But perhaps the death of Saddam, who once haunted the nightmares of a nation, will soon come to seem insignificant. In Iraq, guerrilla and criminal violence executes as many as 500 persons a day. Saddam's hanging is just one more occasion for a blood feud in a country that now has thousands of them.