The spirit of folk was everywhere this year, with a slew of tribute albums to various new hybrid forms -- from freak-folk to folk-punk and beyond. 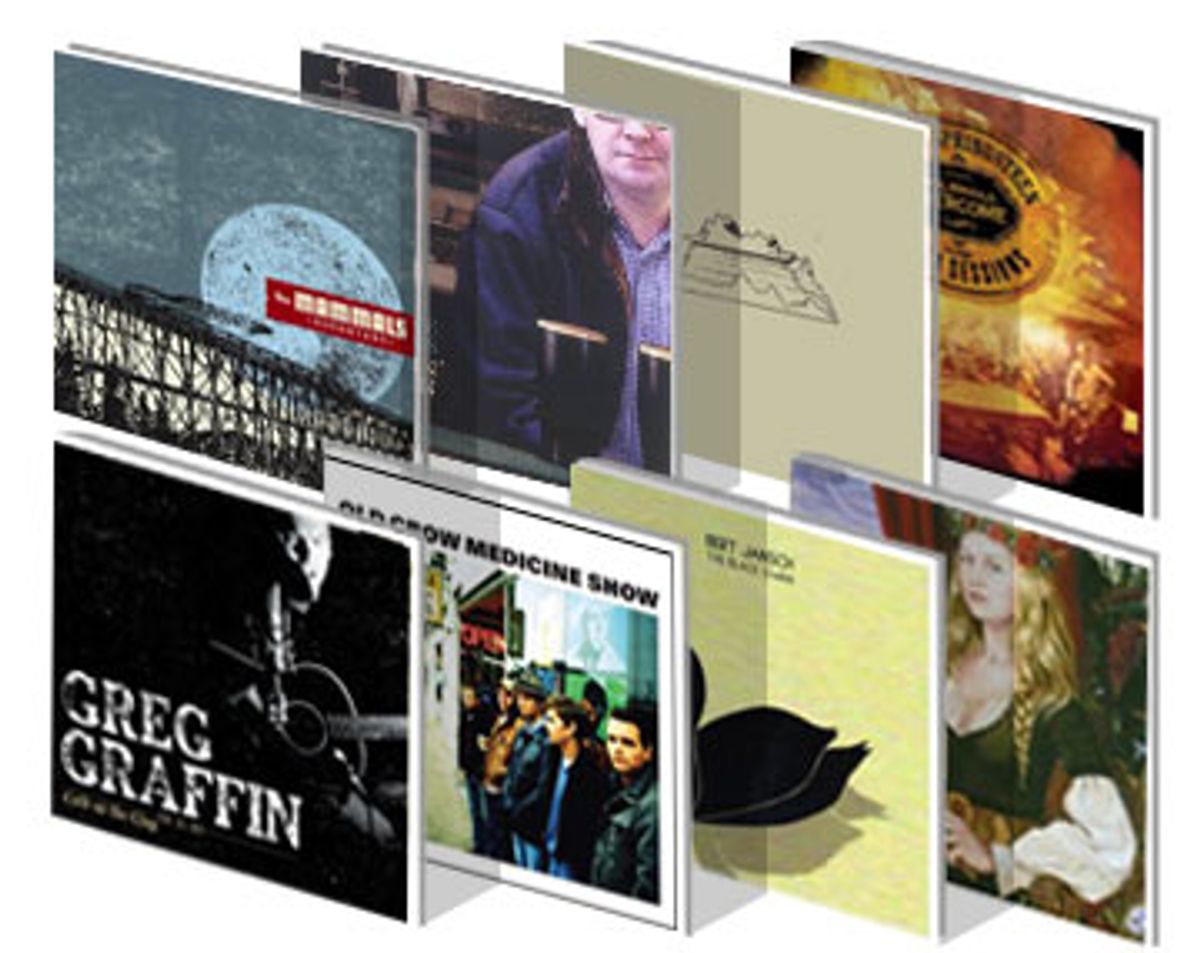 "Well, you're in Greenwich Village now, where people come to get away from America. It's not jazz around here anymore -- it's folk music. Jazz is high-hat and aging. Young people have gone mad over ballads, blues, guitar playin' and banjo pickin'."

That's musicologist Alan Lomax, addressing the camera from his West Third Street digs in the old hootenanny film "Blues, Ballads, and Bluegrass." Lomax looks as self-satisfied as a missionary who has just gotten the natives to use a plow -- and with good reason. His scrupulous field recordings, along with the junk shop treasures reissued on LP by his quirkier associate, Harry Smith, have borne much of what's called "folk music" into the mid-20th century. And there in his living room, the folk revival circa 1961 is about to hold a jam session: bright young Villagers like Peter LaFarge and the New Lost City Ramblers, with gray-haired Southerners from actual villages -- including Doc Watson and Clarence Ashley, just back from obscurity.

But this new revival is less a mighty wind than a subtle, global climate change. Too dispersed across the range of pop culture to fit in Lomax's apartment, its purveyors wouldn't even necessarily want to be seen in the same room: young string bands weaned on "O Brother, Where Art Thou," folk-punks drawn to the declamatory spirit of Billy Bragg, the new generation of acoustic Anglophiles and psychedelicists who've been lumped under the problematic heading "freak-folk," rockers gone rustic, reenergized established folkies, and too many similar currents to chart, much less list.

Though Springsteen's 62-date "Seeger Sessions" tour was lightly attended in the United States, its arena-scale expansion of union hall music was unprecedented. Between the four rhythm guitarists and the highest-amped accordion in history, all that was missing was a flame-throwing harmonica to detonate a giant effigy of Joseph McCarthy. But on the album, Seeger seems to have revived Springsteen as much as vice versa. "We Shall Overcome: The Seeger Sessions" may have been meant to summon foot-stomping early-revival populism, but the spirit that showed up was one from Springsteen's personal past: the group exaltation of the early E Street Band.

"The Seeger Sessions" is just one of an outpouring of albums that have made 2006, relatively speaking, the year of the folk tribute. Artists as wide-ranging as Sting and the throat-singing kook Baby Gramps have appeared on odes to work songs, sea chanteys and the work of folk-blues primitivist John Fahey. Sonic Youth, Elvis Costello and a cast of other critically acclaimed types haul the interpretive ethos of the "folk process" to audacious heights on the box-set tribute "The Harry Smith Project: Anthology of American Folk Music Revisited." Culled from a series of millennial tribute concerts to Smith's 1952 six-LP compilation of pre-Depression recordings, "Revisited" ranges from lovely straight renditions by folk vets Geoff Muldaur and the McGarrigle sisters to the mere chutzpah of Costello's sequel to the murder ballad "Ommie Wise," and further to the outright perviness of Sonic Youth's squalling take on the Appalachian banjo ballad "Dry Bones."

The work of some established folkies also flowered this year. To call Bob Dylan a folkie is something like calling Johnny Cash a cowboy, but he'll always be the apostate golden boy of the Greenwich Village folk scene. In 2006, between the "spirit on the water, darkness on the face of the deep" and the "toothache in my heel," his lyrical muse has rarely been brighter. It's fitting that "Modern Times" is his first No 1. record in 30 years. Dylan's elder, Ramblin' Jack Elliott, also weighed in with "I Stand Alone," an album of dusty blues, suicide ballads and cowboy/canine love songs made all the more powerful by his remarkably unsentimental delivery -- remarkable, that is, for a man who spent a Brooklyn childhood daydreaming to the "Grand Ole Opry."

If there's a single folk artist who has bridged generations this year, it's 64-year-old Bert Jansch, whose new album, "The Black Swan," features backing from followers Devendra Banhart, Beth Orton and members of Chicago's Espers. In Britain, the one-time member of Pentangle has been known since the '60s as a genre-melding acoustician on the order of Richard Thompson, but in the States, "The Black Swan" has been received with the kind of buzz that usually greets, say, the occasional young rock band with its sails perfectly angled to the zeitgeist. Such far corners of the music press as Entertainment Weekly (grade: A minus) and the indie-centric review Web site Pitchfork (rating: 7.9) have raved about it, and SF Weekly pronounced Jansch "better than Dylan."

But just as Lomax saw his folk revival driven by "young people," so the greatest diversity of the present revival is found among artists younger than, say, Sonic Youth.

José González, 29, is a Swedish son of Argentine immigrants who sings in the spectral register of Nick Drake and Elliott Smith (apparently, the Arctic Circle doesn't do much for Argentine melancholy), while his fingers draw hypnotic, hybrid figures of blues, folk-pop and flamenco. This year alone, the singer-guitarist saw the first proper American release of his 2003 album "Veneer," put out two new EPs and scored a YouTube hit with his cover of the Knife's "Heartbeats" in a Sony Bravia TV spot.

Among younger artists, the best-documented recent folk trend is "freak-folk," an unfortunate tag that evokes Tiny Tim more accurately than Joanna Newsom, Banhart and the class of other artists who bridge the folk and indie-rock scenes, sometimes with a nostalgic eye to the British folk revival of the '60s. In 2006, a variety of putative freak-folk acts have released albums that defy the supposed minimalist confines of this heading, including Espers, whose "Espers II" adds inky synth and electric leads to the band's acoustic blend of medieval and psychedelic overtones.

Newsom herself has flown the pigeonhole with 2006's least folksy folk album. The 24-year-old singer-harpist's second full-length, "Ys," has understandably divided critics. After one listen, the album (pronounced "ees") is either the acoustic second coming of Kate Bush at her ethereal best or the untimely resurrection of Yes at their gaseous worst. But with patient listening, the emotional spirals of her newly lush voice reveal a romantic confessional buried in knotty metaphor and rhapsodic arrangements courtesy of baroque-pop auteur Van Dyke Parks.

While freak-folk arguably peaked last year, 2006 has been a watershed for another trend among younger musicians: a wave of "old-time" string bands, inspired by pre-bluegrass combos of fiddle, banjo, guitar and mandolin. Whether or not these bands were sparked by the soundtrack to "O Brother, Where Art Thou," most of them were in fact formed soon after the film's 2000 release and have steadily gained acceptance on the established folk circuit ever since. This year, old-time seems to have arrived, with a critical mass of releases on respected record labels, significant airplay on outlets like WUMB and XM Radio, and a November article in the New York Times charting the trend. The Mammals -- the poppiest of the old-timey bands -- make a joyfully precarious sound and play just as loose with tradition; older fans of string-band music wouldn't amused by their drum kit, for instance. By contrast, Old Crow Medicine Show are traditional, but they're hardly strict preservationists: On their second album, "Big Iron World," Woody Guthrie's proto-feminist "Union Maid" gets a blast of mountain air, and the rag "Cocaine Habit" takes a direct swipe at Karl Rove.

With far less hype than old-time or freak-folk, another folk trend has emerged: Virtually every sub-MTV stratum of punk-rock has gone back to basics, some all the way to the logical acoustic conclusion. 2006 has seen startlingly traditional-sounding solo debuts from the frontmen of three influential punk bands: Jake Burns of the Northern Irish '70s punk band Stiff Little Fingers, late-'80s hardcore icon Greg Graffin of Bad Religion, and Tim Barry of the '90s band Avail.

Ghost Mice is a Bloomington, Ind., duo that bridges the earnestness of Phil Ochs with a raw, do-it-yourself aesthetic. Ghost Mice singer Chris Clavin, who has provided a locus for the folk-punk trend with his own label, Plan-It-X, offers a theory to explain the recent emergence of so many seemingly unrelated folk currents.

"Music is getting boring again and the radio is dreadful," Clavin says. "Loud rock bands do the same old thing, cool dudes in tight pants and pretty girls with lipstick singing about nothing. I think people want more storytelling, being social animals like we are."

Andrew Marcus is a journalist and playwright living in Los Angeles.