A day for celebration, but the war awaits

Can Democrats force Bush to change course on Iraq? 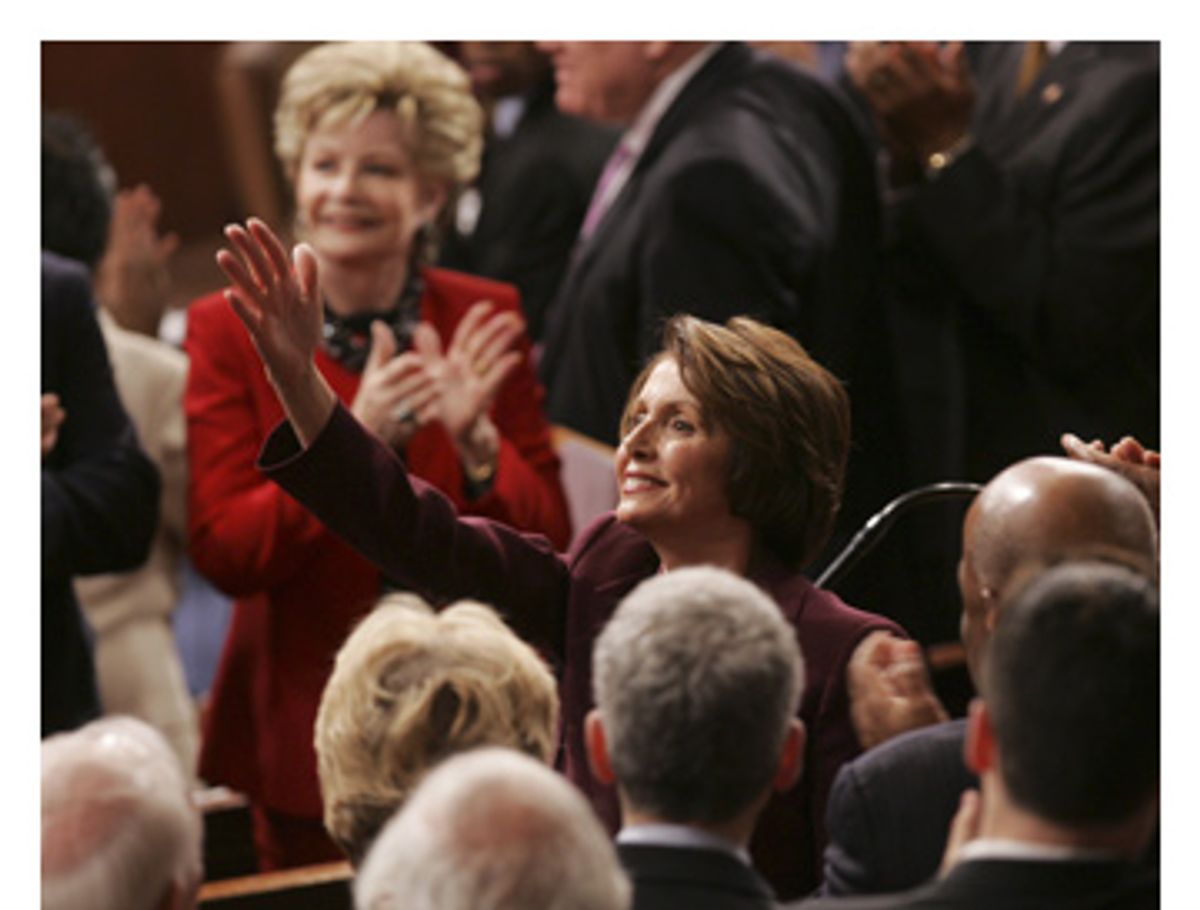 New members of Congress have now taken their oaths of office, and Democrats have begun the slow process of electing Nancy Pelosi as the new speaker of the House. It's an important day but mostly a ceremonial one: What matters is what happened in November -- and what will happen when Democrats actually go about the business of governing in the weeks and months ahead.

For all of the talk about Pelosi's 100-hour agenda, not a whole lot of Americans went to the polls in November thinking that what they really wanted from Washington was an increase in the minimum wage or even some generalized "change in tone." What they wanted -- and the polls are pretty clear about this -- was a change in direction in the war in Iraq.

Seventy-seven percent of Americans tell AP/Ipsos that it's "very important" or "extremely important" for Congress to make "significant changes in U.S. policy in Iraq." Seventy percent of the public disapproves of the way George W. Bush is handling the war. And outside of John McCain, Joe Lieberman and the folks at the American Enterprise Institute, it's hard to find anyone who likes what they're hearing about the president's apparent plan to send more troops into battle.

What will the Democratic Congress do? Democratic Sen. Carl Levin says he could consider a temporary surge in troops but only if it's conditioned in ways that Bush isn't likely to accept -- making the troop surge "truly conditional upon the Iraqis' actually meeting milestones, and if it's part of an overall program of troop reduction that would begin in the next four to six months, it's something that would be worth considering." Other Democrats, like incoming Foreign Relations Committee chairman Joseph Biden and Pennsylvania Rep. Jack Murtha, say no way, no how.

Which is all well and good, but what will they do about it? As the New York Times notes today, Senate Democrats plan no fewer than 13 separate hearings on Iraq in the coming month or so. But this isn't a case where Congress needs hearings to shine a light on an issue so that the American people can see that there's a problem. The people know that Iraq is a problem. They made that clear when they went to the polls in November; if Bush didn't get the message then -- and it's pretty clear that he didn't, or did but doesn't care -- no number of televised hearings from Capitol Hill is going to shame him into listening now. Murtha gets that; in an interview with Arianna Huffington, he says that the only way to stop Bush from sending more troops "for sure" is to deny him the funding he needs to do so.

As Walter Shapiro noted earlier today, that's a politically risky move. But voters put the Democrats in power because they wanted a change on Iraq, and change is always going to carry some risk. It's a good day for a party today, but we'll make the same sort of observation we made when the White House announced plans for a series of lavish receptions over the holidays. We're a country at war, a war that's going badly, and we're looking to our leaders to do something about it now.