Can Democrats keep Bush from sending more U.S. soldiers to Iraq? Salon explores the options, from immediate withdrawal to taking sides in the civil war. 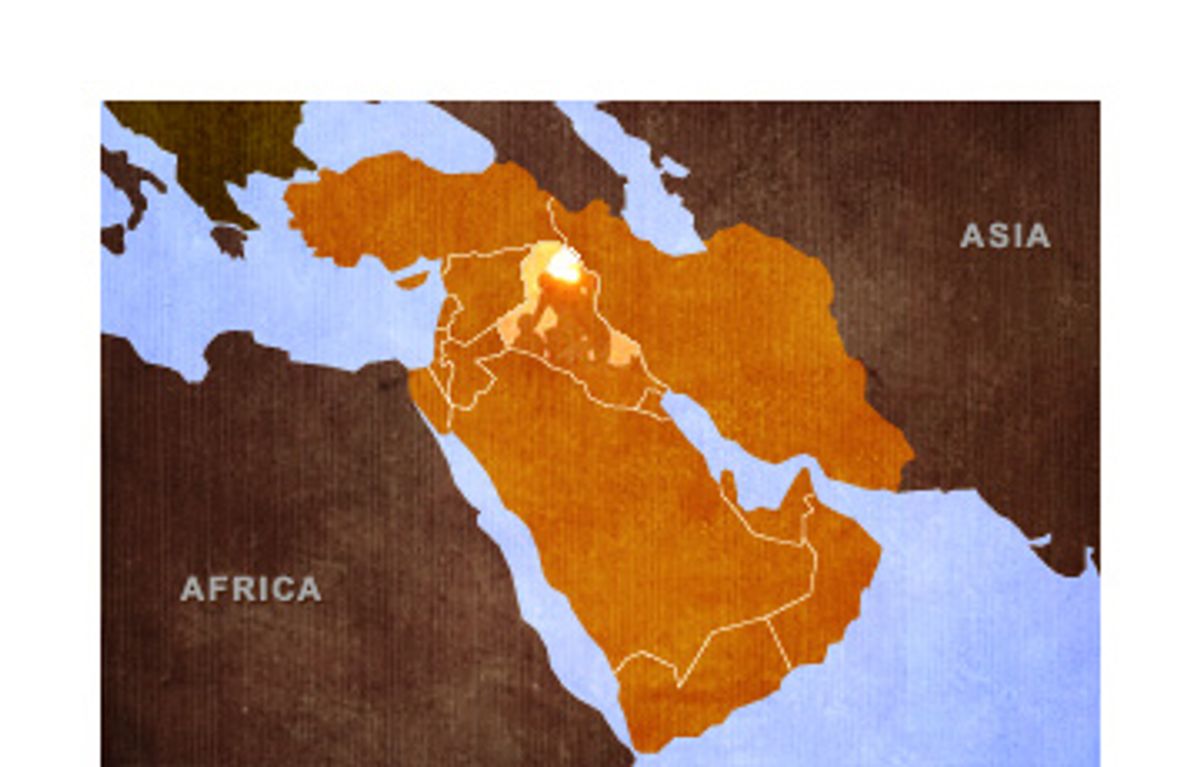 President Bush is expected to reveal a boldly controversial new plan for the war in Iraq as soon as next week. The much-anticipated announcement, which was postponed from before Christmas, comes after weeks of meetings among top White House advisors. Bush has said that all options are on the table, but by most reports he favors a "surge and accelerate" proposal that would send 20,000 to 40,000 more American soldiers to Baghdad.

The so-called surge has earned serious consideration from some of the top U.S. commanders in Iraq, but the Joint Chiefs of Staff reportedly oppose it. The surge also pits the president against a majority of the American public; more troops in Iraq is presumably not what that public thought it was getting when it gave the Democrats control of both houses of Congress in November. The surge is not even a slam-dunk with Bush's once-compliant fellow Republicans.

What is the likelihood that Bush will get the Iraq policy he wants, and is there any way the new Democratic Congress can stop him? Starting with the surge, here is a rundown of the various proposals for getting out of Iraq or getting in deeper, and the very unscientific odds of any of these plans becoming reality.

"Surge and accelerate"
Also known as adding more troops. Despite poll numbers that show most Americans don't like the idea, the president isn't the only Washington politician thinking about sending more U.S. soldiers to Iraq. In what has been called a "muscular" stance, Sen. John McCain has argued since late 2006 for sending 15,000 to 30,000 more U.S. troops to defeat the insurgency and stabilize Baghdad. The "surge" has garnered support among some Pentagon leaders, who also recommend a strong offensive against radical Shiite cleric Muqtada al-Sadr and "a long-term increase in the size of the military," according to the Los Angeles Times. Sens. Joseph Lieberman and Lindsey Graham have also joined the faction calling for a swell in troop numbers. Erstwhile Democrat Lieberman has done so despite flirting with bringing troops home when he was fighting off an insurgency of his own -- Ned Lamont's candidacy. In recent days, however, prominent Republicans have come out against the so-called surge, including Arlen Specter and Richard Lugar. The "surge and accelerate" plan has been credited to Iraq hawks at the American Enterprise Institute, whose "Choosing Victory: A Plan for Success in Iraq," by neocon Frederick W. Kagan, gave the Bush administration a welcome alternative to the so-called graceful exit outlined by the Iraq Study Group. But some of the architects of "Choosing Victory" insist their goal is not a short-term surge. Retired Maj. Gen. Jack Keane, an architect of the AEI plan, told the BBC on Wednesday that the plan envisions the new troops staying for at least 18 months, and focusing on combat and security, especially around Baghdad, rather than on training Iraqi soldiers to fight. Even some "surge and accelerate" supporters might not have the stomach for such an open-ended mission, and one that puts the focus back on American soldiers in combat rather than training operations. Backers: John McCain, Joseph Lieberman, Fred Kagan. Odds: Even money.

Engage Iraq's neighbors
Lugar and Specter instead back one of the recommendations made by the Iraq Study Group, the bipartisan commission headed by James Baker and Lee Hamilton -- "a new diplomatic offensive" that would engage Iran and Syria in talks about Iraq. Specifically, the study, which though released only a month ago now seems positively musty, suggested that the U.S. urge Iran to "control the flow of arms and training to Iraq," and urge Syria to more strictly police its border with Iraq. The ISG report also emphasized the need for a "jump-start to the Israeli-Palestinian peace process." At a press conference in December, President Bush continued to sound skeptical of any such diplomacy. Over the Christmas holidays, Specter went to Syria on his own initiative to talk to President Assad. Backers: the Iraq Study Group, John Kerry, Chris Dodd, Arlen Specter, Richard Lugar. Odds: 5-1 against.

Phased redeployment of troops
Soon after the Democrats won a congressional majority in the November elections, party leaders promised to push for a gradual withdrawal of troops. Leading Democratic Sens. Carl Levin, Joseph R. Biden and Harry Reid were at the forefront of these pledges, arguing that such a plan would deliver a strong message to the Iraqi government that U.S. help was not open-ended. A "phased redeployment of troops" has become a catchphrase for the Democrats, with vocal support also from Sens. Barack Obama, Hillary Rodham Clinton, John Kerry, Russ Feingold, Dianne Feinstein, Jack Reed and Dick Durbin. This approach advocates a "non-binding resolution" -- leaving the work of forging an actual blueprint for troop redeployment in President Bush's hands. Backers: Chuck Hagel, John Kerry, Harry Reid. Odds: 5-1 against.

Curb war funds
Though Democrats now control both the House and the Senate, the president is the commander in chief. The only way they might be able to stop Bush from pursing a "surge" would be to cut his purse strings. In the wake of the Democratic election victory, incoming House speaker Nancy Pelosi said she would not seek to cut off funding: "As long as our troops are in harm's way," she said, "Democrats will be there to support them." But as signals mount that the president is digging in his heels, sources on the Hill tell Salon that "defunding" may be back on the table. A number of New England Democrats, including Vermont's Patrick Leahy, are said to be taking a new look at the money. In 2005, only 19 members of Congress backed a measure to cut all funds for military action in Iraq other than withdrawal. Barney Frank of Massachusetts, who co-sponsored the bill, thinks the number would be larger than 19 today. "If it becomes clear the president is determined to send more troops there, I believe that will give us more support for this effort." Virginia Rep. Jim Moran, a member of the Appropriations Committee, has argued that the only leverage Democrats have is "holding up the money" in a way that does not endanger troops. In a column for a Virginia paper last month, Moran wrote, "[In January], the President will request an additional $160 billion to fund military operations in Iraq and Afghanistan. This will provide the new Democratically-controlled Congress with an opportunity to gain some control over the funding and direction for the war in Iraq." He made the same point on Tuesday to Tucker Carlson during an appearance on MSNBC. Backers: Dennis Kucinich, Lynn Woolsey, Charles Rangel. Odds: A long shot, but shortening.

Withdrawal of troops
Long before the election, however, a significant faction of the Democratic Party was already advocating a much more accelerated departure from Iraq. Most notably, during an emotionally charged press conference on Capitol Hill in November 2005, Democratic Rep. John Murtha of Pennsylvania, a war veteran with strong ties to the military, called for an immediate withdrawal of troops. Rep. Dennis J. Kucinich of Ohio, a torchbearer for the liberal base, has since harshly criticized more moderate Democrats' resistance to an immediate withdrawal, saying the failure of the party's leadership to respond to voters' antiwar message spells disaster for "our party, our nation and the world." Most Americans remain resistant to an immediate withdrawal but would like to see all U.S. troops pulled out by the start of 2008, according to a recent Washington Post-ABC News poll. As of the start of the new Congress, however, the "Out of Iraq" caucus now has more than 70 members, or nearly a third of the Democratic delegation. Backers: John Murtha, Dennis Kucinich, George McGovern, Appeal for Redress -- more than 1,300 active-duty, reserve and guard service members. Odds: Long shot.

"Train and Retreat"
While Democrats debate how many soldiers should leave and when, this plan is already effectively under way, according to military insiders who spoke to the New York Times for a December article. William J. Perry, who served as secretary of defense under Bill Clinton, pushed for "train and retreat" as a member of the the Iraq Study Group. To hasten the Iraqi government's takeover of the country's security forces, Perry argued for a fivefold increase in the number of U.S. military advisors embedded in Iraqi Army units and a gradual phasing out of U.S. combat troops. The ISG report was careful to note that if the Iraqi government failed to meet certain "milestones," the U.S. should "reduce its political, military or economic support." In December, USA Today reported that Gen. George Casey, the military's top man in Iraq, had asked planners to come up with a plan that would work along similar lines, but the Times reported earlier this week that Casey has lost the confidence of the president and may be on his way out. Backers: Gen. George Casey, Iraqi Prime Minister Nouri al-Maliki. Odds: Already happening.

Back the Shiites
And finally, with the Bush administration, there is always more than one alarming idea in the mix. There is the surge, and then there are also rumors in Washington of a radical plan originating in Vice President Dick Cheney's office to take sides in Iraq's civil war. In December, the New York Times reported that someone in the Cheney camp has been contemplating what the Times called "the Darwin Principle": backing Iraq's now-dominant Shiite majority against the minority Sunnis who once ruled Iraq and who constitute much of the insurgency. Bush reportedly thinks of top Shiite politicians as "our guys" and the recent execution of Saddam Hussein, which was apparently conducted by radical Shiite elements and was in many ways a thumb in the eye of Iraq's Sunnis, seemed to be a sign that the Shiites are in control, with our support. There are several potential drawbacks to this option: First, we'd be allying ourselves with the allies of the country Cheney's office and its associates have been making aggressive noises about, Iran; second, we'd be choosing sides in an age-old divide in Islam -- and worldwide, Sunnis are by far the dominant majority. Wayne White, a scholar at the Middle East Institute, told the Times that siding with the Shia out of expediency in Iraq "would be a multi-headed catastrophe" and "the most inflammatory thing we could do right now." Backers: Unknown; an as-yet anonymous person within Vice President Dick Cheney's office. Odds: Long shot, we hope.