It's time for Democrats to step up and do what they were elected to do: Oppose this president's disastrous war with a smart and courageous strategy. 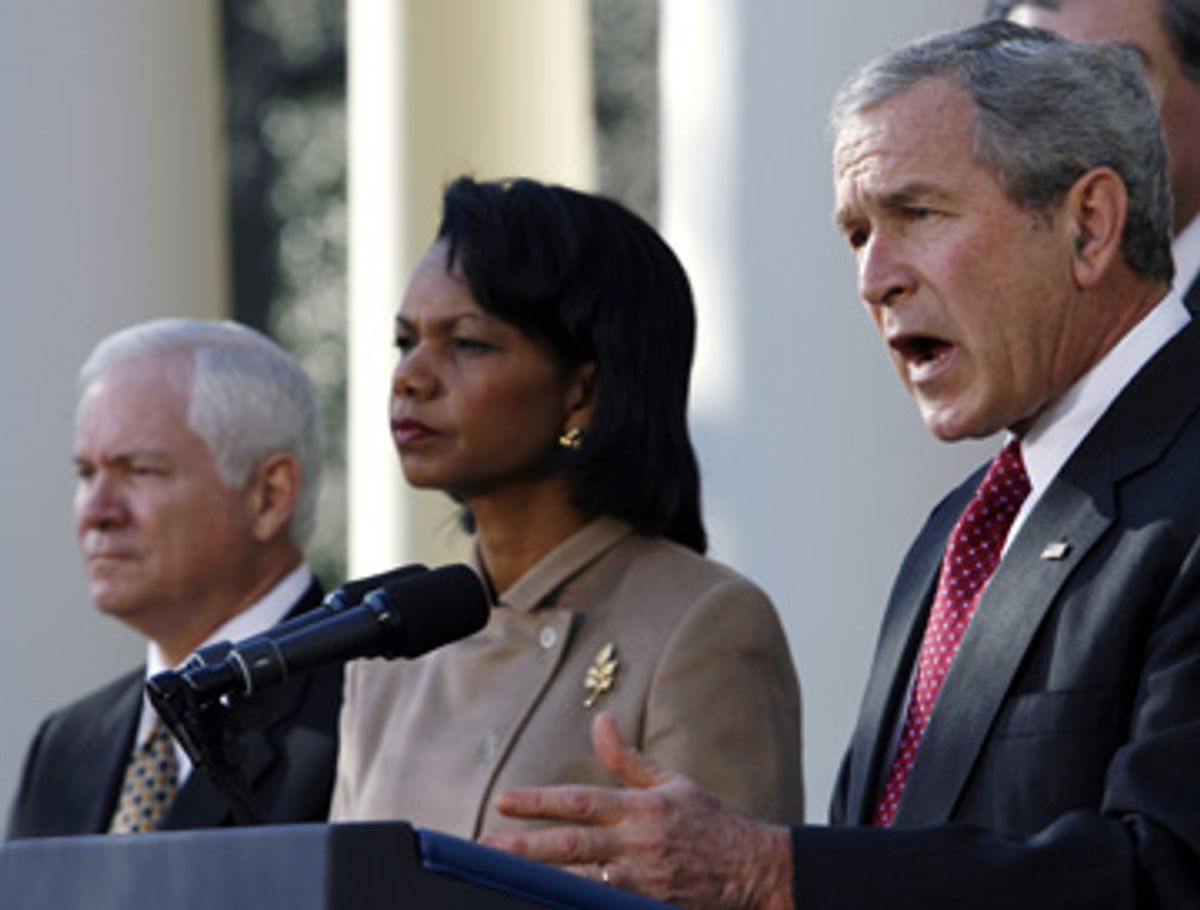 &Let Democrats enjoy the party. Let House Speaker Nancy Pelosi and her family savor the assorted tributes to the nation's first female and first Italian-American House speaker. Let House Democrats get started on their "First 100 Hours" agenda, even if detractors say it's heavier on symbolism than substance. And then, sometime soon, let the new Democratic congressional majority show the nation its members have a smart, courageous strategy to fight the Bush administration's plans to escalate the war in Iraq and lay out a deliberate exit plan instead.

On Wednesday, President Bush came back from his Crawford Christmas energized, recovered from his November "thumpin'," with a stunningly insincere call for bipartisan action in the Wall Street Journal and in an odd Rose Garden tableau with his Cabinet. (Did anyone else think Condoleezza Rice looked unusually miserable?) But by far the most brazen of the president's new initiatives is his reported plan to "surge and accelerate" the war, sending in somewhere between 10,000 to 40,000 new troops. On this front, at least, Bush has kept his word: He refused the "graceful exit" from an unwinnable war offered by his father's friends in the Iraq Study Group, just as he promised last month. Instead he's proposing a bloody escalation, and Democrats have to decide whether and how to fight it.

We've heard a lot in recent weeks about how the Democrats are coming to power without a real mandate, in contrast with the Republican class of '94, which supposedly sailed into Washington on the wings of the "Contract With America." There's so much wrong with that comparison that it needs to be taken apart piece by piece. The triumph of the class of '94 had much less to do with the Contract With America (fewer than 30 percent of Americans had heard of it, and only 7 percent said they voted for Republicans because of it), or with Gingrich's crackpot agenda (remember orphanages for the children of welfare recipients? Dismantling the Department of Education?), than with voter anger at the Democrats' decades-long and increasingly corrupt control of Congress. Republicans were also aided by the Clinton administration's early missteps on gays in the military and healthcare -- all amplified by the unimaginative Beltway press pack's exaggerated coverage of administration "scandals," starting with Whitewater.

In fact, Gingrich and company's arrogant overreaching and saber-rattling about their "mandate" cost Republicans the chance to implement much of their agenda. It led instead to gridlock and the toxic culture of vicious hyper-partisanship and corruption that turned Congress over to the Democrats in November. So Democrats are right to see their mandate mostly limited to cleaning up corruption, making Congress work, and the other symbolically important if safe initiatives, like a minimum wage hike and funding stem-cell research, contained in their 100 Hour agenda.

But they are wrong if they don't take leadership in the one area where voters gave them a bigger mandate than the Contract With America ever had: ending the war in Iraq. That's why the Democrats' early timidity on opposing the president's war plans has been discouraging. At a time when only 12 percent of Americans believe we should send more troops to Iraq, far too many Democrats seem ready to acquiesce in what should be called an escalation not a surge. In December, Senate Majority Leader Harry Reid said he was open to backing the president's plan for a troop increase under certain conditions; on Wednesday, Senate Armed Services Committee chairman Carl Levin said the same thing. On the House side, Majority Leader Steny Hoyer told MSNBC Thursday that he'd back a push for 20,000 new troops, though he added, "We need to find out specifically what he wants to do with those troops."

Pelosi skirted specifics in her jubilant speech after being elected speaker. Acknowledging that voters sought change in Iraq when they cast their ballots in November, she added pointedly, "It is the responsibility of the president to articulate a new plan for Iraq that makes it clear to the Iraqis that they must defend their own streets and their own security ... a plan that promotes stability in the region ... and a plan that allows us to responsibly redeploy our troops."

Pelosi is right -- it is the president's mess -- but she's wrong if she concludes the Democrats don't have to help clean it up. (On Friday afternoon, after this piece was published, Reid and Pelosi released a letter to Bush opposing his call for more troops, a laudable first sign of serious spine from the Democrats. But what they do when Bush rejects their advice, as he almost certainly will, is going to continue to challenge party leaders.)

Some of the Democrats' caution is understandable. There are two arguments against the new congressional majority doing much on Iraq. The first is pragmatic: There isn't much they can do. Bush is the commander in chief, he can deploy another 40,000 soldiers without asking permission. While Congress has budget authority, Vietnam showed how hard it is to strangle a war with purse strings. Democrats really only cut funding for that unpopular war when the pullout was a fait accompli, and still had to fight the spurious charge that they "lost" Vietnam.

The second argument, that it's political suicide to forcefully advocate for a phased withdrawal or even to oppose Bush's escalation plans, is less convincing. Yes, the unfair claims that dovish Dems lost Vietnam still rankle, but Democrats are also paying a political price for their temporary hawkishness on Iraq, most notably the October 2002 Senate vote authorizing the war, which leading contenders for the 2008 presidential nomination -- John Edwards, Joe Biden, John Kerry, Hillary Clinton -- have either had to repudiate or, in the case of Clinton, contort themselves beyond political comfort and credibility, to escape the voters' wrath. The hawkishness, of course, was really cowardice. Few believed Saddam was a real threat, but most caved to the president out of fear of being labeled soft on terror and weak on security after 9/11. They can't afford to do it a second time.

Just as there's risk to getting out front on Iraq, there's a risk to doing nothing, to standing back and letting Bush drag the nation deeper into the debacle. Precipitous withdrawal isn't an option -- even a president committed to an exit would need time to seek international and regional assistance in stabilizing the country and encouraging political, not just military, solutions to the violence. But Bush isn't a reasonable president committed to an exit, and his so-called surge should become a Democratic line in the sand. Two of its leading architects, Frederick Kagan and Gen. Jack Keane of the American Enterprise Institute, have at least had the decency to say their plan will require at least 30,000 additional troops, require an 18-month commitment, and force a reorientation of the U.S. mission in Iraq away from training and back to combat. That's no short-term surge.

It's true the president hasn't yet laid out his proposal, and Thursday McClatchy Newspapers quoted administration sources saying the president will send fewer new troops than have been signaled this week, between 10,000 and 20,000, not the 30,000 to 40,000 the AEI plan requires. That's not terribly encouraging. Once again, Americans, Iraqis and the world will likely have to suffer through the odd compromises, seamy political alliances and ideological rigidity that link Bush and the neocon fringe. Whereas in 2003, they said toppling Saddam and building democracy in Iraq could be done with fewer troops than U.S. generals predicted -- and they were wrong -- now they want to send more than the generals are asking for. The Bush administration may well split the difference with the same result: failure. What remains missing from every escalation plan is a convincing political and military strategy that lays out why new troops will fare any better in stabilizing Iraq than the existing force has.

Despite the accommodation of a handful of key leaders, many Democrats are promising to fight the new troop plan. Although few beyond fringe-dweller Dennis Kucinich will come out and say they'll use their power to restrict funding to stop the escalation or end the war, many are talking tough about forcing the president to submit his war budget, including funds for new troops, to appropriations committee hearings. That way Democrats -- and Republicans -- can use the hearing process to ask tough questions about the war to date, and the escalation plans. Joe Biden, Patrick Leahy, Charlie Rangel, Barney Frank, John Murtha and even the former war supporter Jane Harmon have all come out against the troop surge plan and backed more muscular oversight of Bush's Iraq planning and spending.

Democratic antiwar activists may not thrill to the sound of hearings when they're advocating for defunding the war, but tougher oversight could yield clarity about how badly the administration has botched Iraq, and how unlikely it is that the new Bush plan will produce a different outcome. That clarity might lead to more political courage and a readiness for tougher measures by members of both parties. Although Democrats shouldn't be fooled by Bush's platitudes about bipartisanship, it is true that a way out of the war will require Republican partners, and the Democrats already have allies, especially in the Senate with Chuck Hagel, Richard Lugar, Arlen Specter, Gordon Smith and Susan Collins all sounding tougher on the president's escalation plans than certain Democrats.

It was impossible not to notice that the Democrats came to power against the backdrop of two widely watched deaths -- Saddam Hussein's execution, which divided Sunni and Shiite in Iraq, and former President Gerald Ford's quiet passing, which briefly united this country. The symbolism was powerful. The controversy over Saddam's taunting, and what came to look like his lynching, at the hands of the Mahdi Army was a perfect microcosm of our can't-win situation in Baghdad. We couldn't execute him ourselves, so we handed him over to the Shiite-dominated al-Maliki government, which defied the U.S. and rushed to execute Saddam at dawn on Saturday, while Sunni Muslims were celebrating Eid-al-Adha. (For Shiites, the holiday didn't start until Saturday evening.) But that's self-governance; the Iraqis stood up, the Bush administration had to stand down, and together they managed to make a Sunni martyr out of a murdering tyrant.

By contrast, the lovely pageantry that followed the death of President Ford inspired an understandable yearning for a more bipartisan era. But if President Bush felt his heartstrings tugged, it didn't show. He came straight from the funeral and talked bipartisanship while promising no surrender -- he wants his temporary tax cuts to be permanent, he wants more troops in Iraq, he wants Democrats to balance the budget. Democrats should spurn the White House's insincere advances and develop an aggressive plan to end the war with as little carnage as possible. They can savor their victory today but they have to get to work tomorrow, and do what they were elected to do: oppose this president's disastrous war with intelligence and courage.