No reason to make nice

Nancy Pelosi must be tough in pressing the Democrats' agenda -- and she needn't heed hypocritical Republicans who won't cooperate. 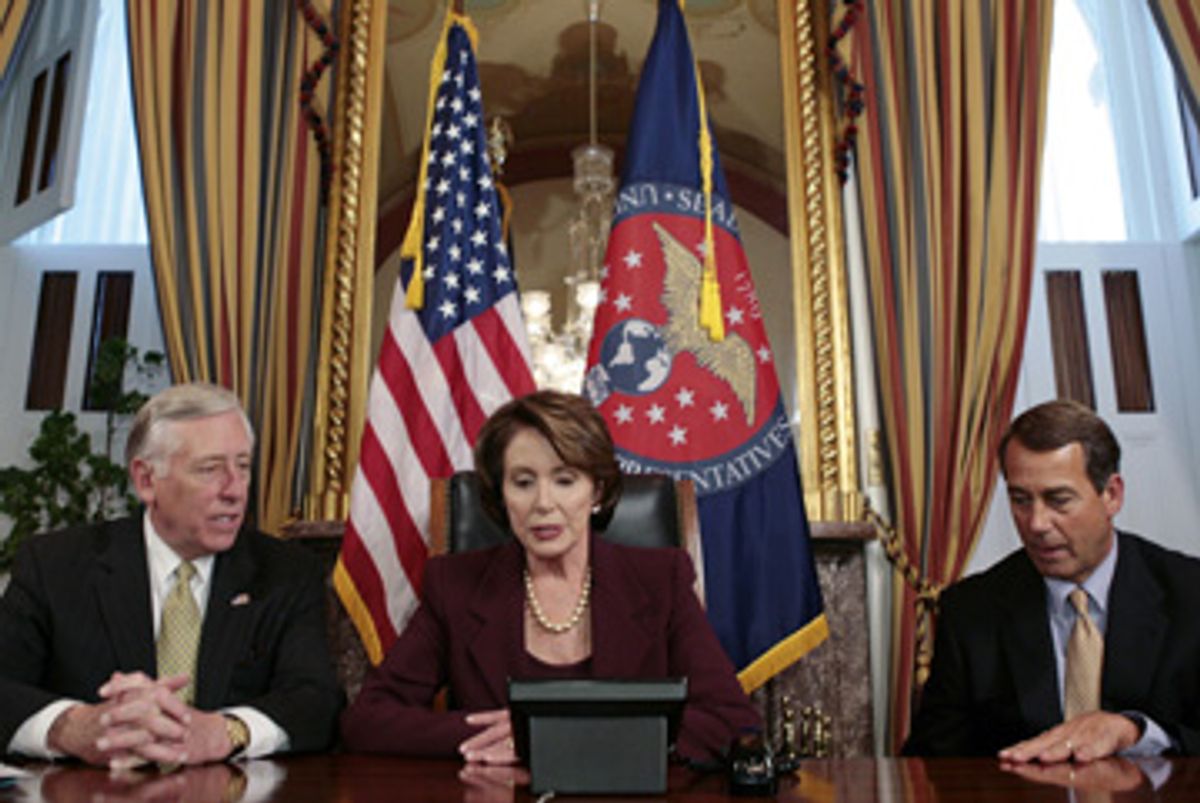 Nancy Pelosi deserves congratulations as the first woman elected to serve as speaker of the House of Representatives -- and for her decision to place the promises made by her party to the American people above the principle of minority rights within Congress. After the Democrats have fulfilled their vow to take action during the new session's "first 100 hours," there will still be plenty of time to show that they can wield the majority gavel with more decency and decorum than their most recent predecessors.

Frankly, that won't be difficult, but it can wait.

In her first remarks as speaker Thursday, Pelosi made all the proper noises about healing, unity, partnership, working together, respecting everybody's opinions and being the leader of the entire House. But as the Republicans have repeatedly proved over the past decade or so, bipartisanship is overrated. Now that they're in the minority, the Republicans may claim that there is nothing more wonderful than the two parties working together, debating everything openly, and treating each other as they would wish to be treated themselves. But they never allowed those old-fashioned values to get in the way of anything that actually matters to them, such as cutting taxes on their wealthy contributors or winning elections.

That ruthless attitude has dominated Washington during the presidency of George W. Bush, as the GOP gained control of all three branches of government. So when Bush urges cooperation between the parties, as he did in the pages of the Wall Street Journal, it is important to remember how casually he and his party trashed the Democrats in the months following 9/11, when bipartisan national unity was so desperately needed -- and after the Democratic leaders in Congress had pledged their complete cooperation to him. The Republican National Committee, the Republican congressional campaign committees and the White House political operation responded, characteristically, by questioning the Democrats' patriotism during the 2002 election.

Naturally, the vanquished bullies are afraid that they will soon suffer the same indignities they inflicted on the Democratic minority with such relish and zeal. They fear that the Democrats will shut them up on the House floor, ignore them in scheduling and administering the business of the House, and manipulate the rules to render them politically impotent. They worry, in short, that they will get what has been coming to them for a long time.

Nothing is funnier than watching Republicans fretting and whining about their deserved fate, as Dana Milbank observed in the Washington Post. They have the gall to complain that Pelosi, who implored them to observe civility and regular order when she became the minority leader, may now ignore similar pleas coming from their side. They say they will be "disappointed" if she fails to live up to her ideals of perfect openness and fairness. She has no reason to heed these hypocrites -- until they show that their own attitudes have changed.

As Pelosi pushes through the progressive legislation of the first 100 hours, the basic facts are on her side. Under her leadership, the Democrats won a larger majority last November than the Republicans have enjoyed at any time since they took over in 1994. And in the 2006 election, the Democrats did not lose a single House seat, which is the first time that has been achieved by either political party for almost 70 years.

Just as important, the Democrats ran a campaign that emphasized issues the "do-nothing" Republicans failed to address -- and won because the public supports the Democratic position on those issues, from increasing the minimum wage to reducing the cost of prescription drugs and student loans to investing in alternative energy, all of which have been debated for years. (In the case of the minimum wage, the issue has been debated annually for almost 10 years without relief.)

The Republican Party is at a nadir of popularity, with its congressional leadership rejected and its president discredited. The new Democratic speaker can act in full confidence that the public is behind her. She should move her party's agenda briskly, while carefully gauging whether the opposition prefers cooperation or confrontation.

If the Republicans play a constructive role as the new Congress opens, then Pelosi ought to reward them by treating them as the partners they claim to be. In principle, she should live up to the ideals of fairness that she articulated as the leader of the minority. But if the Republicans choose to obstruct, then she must be tough -- just as tough as the Republicans were when they sought to pass the "Contract With America" in 1995.

Two years from today, and for many years to come, what the nation's voters will remember is whether the first woman speaker lived up to her promise to move swiftly and decisively on the issues that returned her party to power. Being nice to the Republicans will be no excuse for failing to do so.