Forget Jim Baker's crew. The neocon hawks who sold the war, joined by John McCain and Joe Lieberman, unveiled their new plan for "victory": At least 25,000 new troops in combat roles well into 2008. 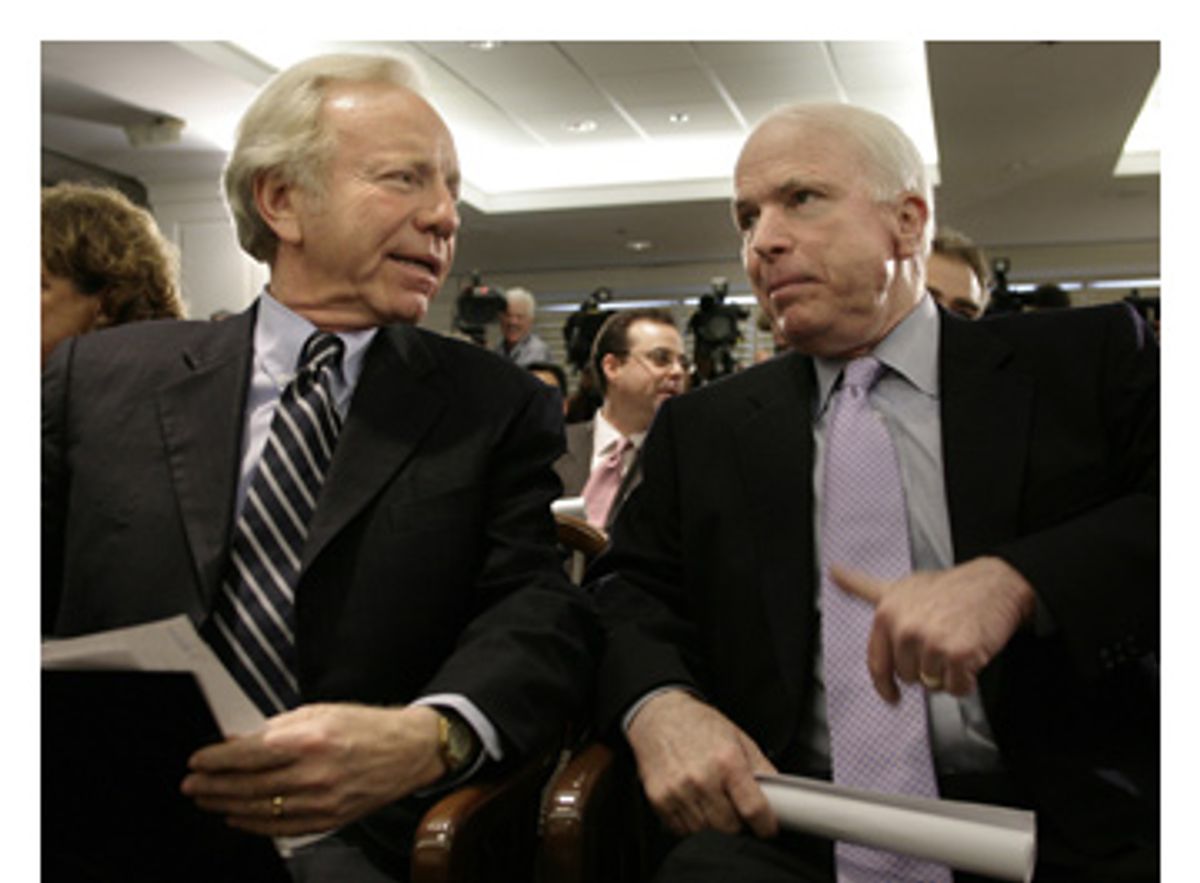 Hawks gathered in the plush, carpeted suites of the conservative American Enterprise Institute on Friday to discuss a new course in Iraq they say should be spearheaded by tens of thousands of new troops camped out in Baghdad neighborhoods in active combat roles well into 2008.

The plan is not to be dismissed. Unlike the much ballyhooed Iraq Study Group, these are the people President Bush listens to, many of them the same influential voices who were predicting in 2002 that the war would establish a flower of democracy in the Middle East. Sitting in the overheated, standing-room-only conference hall, a Department of Homeland Security official leaned over to me to note the irony that reporters had paid so much attention to the workings of the Iraq Study Group, as opposed to the troop-surge plans being cooked up at AEI. "This is the Iraq Study Group," he quipped.

Bush is expected to release a new Iraq strategy next week that reportedly hinges on a troop increase, and many have said his thinking has been influenced by the AEI experts who gathered on Friday.

The think tank's plan is not for the lighthearted. The glossy 47-page AEI report, titled "Choosing Victory: A Plan for Success in Iraq," envisions sending 25,000 additional troops to clear Baghdad house by house. Then, as report author Frederick W. Kagan put it, those soldiers would not pull back to their bases but remain stationed in Baghdad neighborhoods, providing security for civilians. "We can clear and hold critical terrain in Baghdad," Kagan told the crowd.

This is no small surge, nor a temporary one. For better or for worse, it is an escalation of the war. Supporters envision a last-ditch effort to forget about all the mistakes of the past and return, four years into the war, to the overwhelming force envisioned in the so-called Powell doctrine, which held that the United States should never commit less than the overwhelming force needed for a decisive military victory. For die-hard supporters of the war, this is a chance to finally do it right. The plan calls for increased troop levels for at least another 18 months.

This plan also flips on their head the key ideas emphasized by the Iraq Study Group: that the solution in Iraq is political and not military, and that U.S. forces must transition quickly away from combat roles and into training Iraqis. In the AEI plan, the United States would force a military solution that would, in turn, enable a political compromise. Retired Gen. Jack Keane, a plan supporter, called a military victory "the precondition for political, social and economic development."

And there is flat-out disagreement between the war-escalation crowd and a growing chorus of military experts on whether the stressed-out Army can muster this many boots on the ground. While former Secretary of State Colin Powell last month argued against a surge of troops into Iraq because the "active Army is about broken," Kagan said flatly that his analysis shows that the additional tens of thousands of troops "do exist." Supporters readily admit that more troops, in the short term, will mean more bloodshed. Arizona Republican Sen. John McCain, a big supporter of the plan, warned the crowd to expect more casualties and said that things in Iraq "will get worse before they get better."

McCain and Connecticut Sen. Joe Lieberman -- who delivered a neoconservative pep talk that could have come off former Bush speechwriter David Frum's hard drive -- were there to formally embrace the plan.

"We have got to see it in the broader context of the war against Islamic extremism and terrorism," Lieberman said about Iraq. "The Middle East is dividing along new lines. I'm speaking here about the Arab world. And the lines are ever clearer and more intense between what I would call moderates and extremists, dictators and democrats," he intoned. "The fact is that we are engaged against an axis of Islamist extremists and terrorists. It is an axis of evil," he warned.

Lieberman made sweeping historical comparisons between the war in Iraq and the Spanish Civil War, the failure to grasp the growing threat of fascism in Europe in the late 1930s and the start of World War II for America. "Pearl Harbor has already happened on 9-11-01," Lieberman said darkly.

McCain and Lieberman emphasized that they are not advocating a plan to blindly throw more troops into the Baghdad meat grinder. Kagan's report appears to be meticulously thought out, detailing the specific forces that will be required to clear and hold Baghdad. The operation would start with securing the Sunni and mixed Sunni-Shiite neighborhoods closest to the Green Zone and between there and Baghdad International Airport. "Choosing Victory" comes complete with color-coded maps to help envision the neighborhood-by-neighborhood process of successfully pacifying the capital once and for all.

To Kagan and McCain, eliminating insurgents, holding territory and protecting the civilian population in the capital represent a return to classic counterinsurgency tactics that should have been employed long ago, rather than more of the same bumbling around Iraq in Humvees. Such stability then provides the breathing room for enhanced economic development activities and a new focus on forging a lasting political settlement.

The plan looks good on paper, just as the plans to establish democracy in Iraq did back in 2002. But its framers failed to explain how, after three years of shocking mismanagement, the Bush administration would somehow now be stricken with a case of icy competence. Nobody explained how the White House would better manage the war with more troops. McCain said the war had been "very badly mishandled" but said that might be all over now. "I believe that the war is still winnable," he announced. "But to prevail, we will need to do everything right and the Iraqis will have to do their part. Are we concerned about doing everything right and having the Iraqis do their part?" he asked rhetorically. "Of course we are."

At AEI on Friday, there was some palpable concern that even with the color-coded road map to victory the White House might still screw things up. Half measures would lead to failure, according to supporters of this escalation. The Iraq Study Group warned last month against adopting only part of its plan. The same was true of the hawks in the AEI conference room. "This troop surge must be significant and sustained," McCain said. "Otherwise, do not do it. Otherwise, there will be more needless loss of American lives."

That kind of messy carnage couldn't have felt more removed from the posh 12th-floor AEI offices in downtown Washington. Even the roughly 120 war protesters marching out front seemed far away, as reporters and think tank experts snacked on delicately rolled sandwich wraps and a chilled pasta salad, coolly chatting about sending another 25,000 troops into a war that has already cost more than 3,000 American lives.