I wish this dark period of detention and torture were over. But rolling back the Military Commissions Act and restablishing the rule of law are monumental tasks. 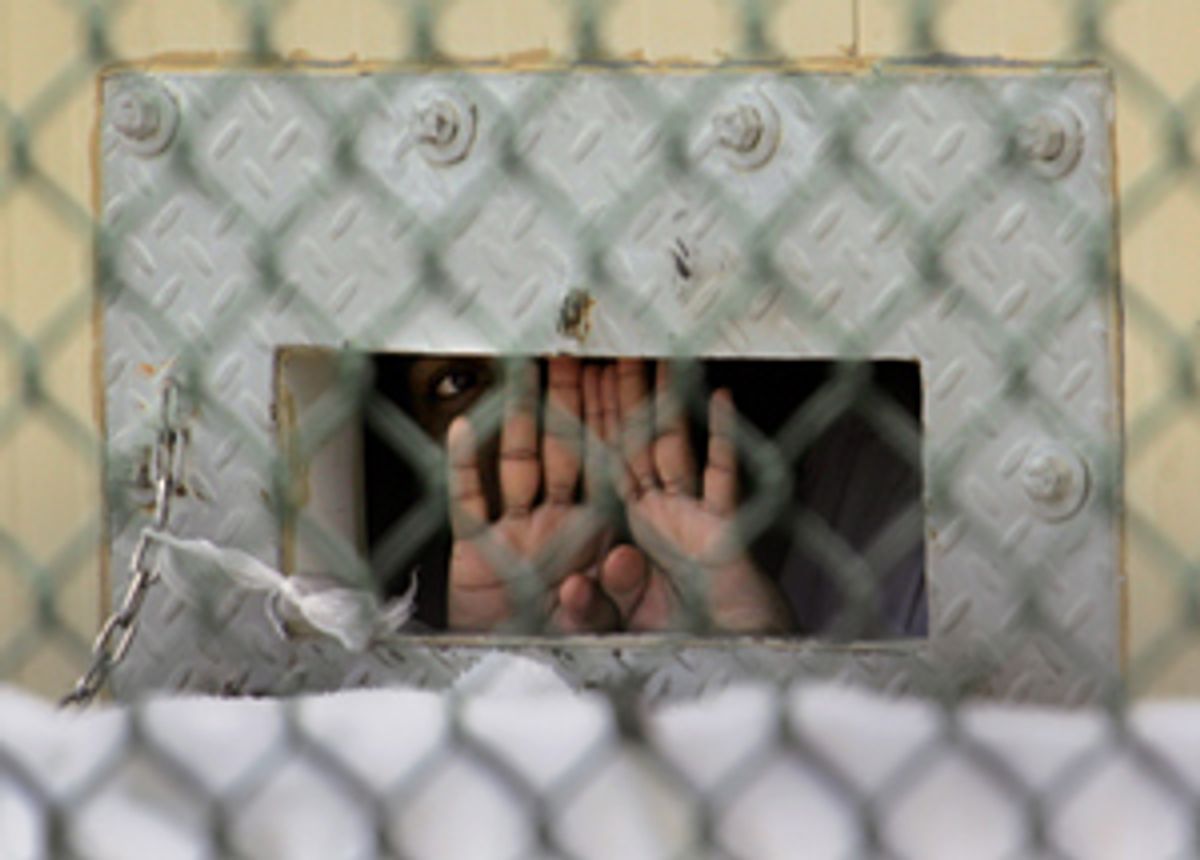 The first time I saw the U.S. prison camp at Guantánamo Bay, Cuba, was in 1992, and it struck me as one of the most frightening, desolate places I'd ever visited. U.S. dominion over the 45-square-mile military base was coerced from the Cuban government in the aftermath of the Spanish-American War, in the early 1900s, as a requirement for granting Cuba its independence. The base now has a population of 8,500; there are schools, a McDonald's, a golf course and a bowling alley, but the veneer of suburban normalcy is thin indeed. Guantánamo is known, above all, as a prison. And although Cuba has no jurisdiction whatsoever over what happens at Guantánamo, the U.S. government continues to insist that U.S. law does not apply there. The isolation is chilling. Neither a foreign country nor a U.S. territory, Guantánamo exists in limbo, a prison beyond the law.

Back before the "war on terrorism," Guantánamo was notorious as the world's first prison camp for HIV-positive people. For years, with the Center for Constitutional Rights, Harold Koh and Yale Law School, I represented Haitian refugees diagnosed with HIV who'd been imprisoned there by the United States in a semipermanent limbo. Federal District Court Judge Sterling Jackson, who finally ordered the surviving Haitians freed, described the deplorable conditions sick prisoners endured: "They live in camps surrounded by razor barbed wire. They tie plastic garbage bags to the sides of the building to keep the rain out. They sleep on cots and hang sheets to create some semblance of privacy. They are guarded by the military and are not permitted to leave the camp."

Outrage and lengthy legal battles finally succeeded in closing the prison camp. But even though the courts had ruled that the United States was responsible for what happened in Guantánamo, some government officials clearly decided to continue advocating for it as a place that could be not only out of sight but outside the law.

A new era dawned five years ago, when the first of several hundred post-9/11 prisoners were taken to Guantánamo on Jan. 11, 2002. They were described by then Secretary of Defense Rumsfeld as "the worst of the worst" terrorists, but none of their names were made public. Just one prisoner, an Australian, managed to have his embassy informed of his capture; his family was notified and went to an Australian lawyer. But the lawyer could not visit, see or speak with his client, nor could any other outsider. Guantánamo prisoners, said the United States, were to be held incommunicado, without any access to courts and without any right to file writs of habeas corpus.

I saw the lawyer's name in the paper and contacted him. The conversation led to a debate at CCR about whether to take the case. As a New Yorker, I had personal doubts about representing anyone suspected of being responsible for the 9/11 attacks; everyone at CCR knew our representation would be wildly unpopular. At that time no other human rights organization was willing to step in. And yet we decided to go ahead, believing that the right of every human being to challenge detention is fundamental. Habeas corpus, the central Western safeguard that prevents arbitrary loss of liberty, makes it impossible for people to be detained on the basis of a ruler's whim. It is the core hallmark of a free society, and we believed we had to defend it. On behalf of the Center for Constitutional Rights and a very small group of lawyers, including Joe Margulies and Clive Stafford Smith, I agreed to represent that first prisoner -- David Hicks.

Hate mail poured in. "These terrorists are not human, so human rights don't apply," said one letter.

But we continued to litigate our case, joined by another courageous attorney, Tom Wilner, from a major law firm. We argued that those imprisoned at Guantánamo had the right to file writs of habeas corpus and force the government to legally justify their detentions in court hearings. We lost in the district court and the appeals court, but we took the case, Rasul v. Bush, to the Supreme Court, and in June 2004 we won. CCR received scores of letters. This time they were not hate mail. Instead, we were told repeatedly that the writer's "faith in America had been restored."

Eventually, joined by hundreds of volunteer attorneys of all political persuasions, we filed habeas corpus petitions for everyone whose family we could find, and we won attorney access to the prison. Once we began to see clients we were able to get more and more names, and the veil of secrecy at Guantánamo lifted a bit.

Interrogation under torture was the modus operandi there, as I found out when we interviewed the newly freed "Tipton Three," innocent and wrongfully imprisoned young men from England. I was shocked by what they told me about the way prisoners were treated: Hooding, stripping, sleep deprivation, stress positions, dogs, removal of the Quran, forced shaving and sexual humiliation were common practices.

One of our clients, Mohammed al-Qahtani, was subjected to months of torture that was documented in a log kept by his guards. He was deprived of sleep for almost two months, stripped, held on the floor and sexually abused by a female interrogator, forcibly hydrated with liquids while shackled to a chair and not permitted to go to the bathroom. His CCR attorney, Gita Gutierrez, reported that Mohammed was still suffering from the effects of his torture and abuse: He "painfully described how he could not endure the months of isolation, torture and abuse, during which he was nearly killed, before making false statements to please his interrogators."

Mohammad never received a hearing. In fact, none of our clients received the hearings the Supreme Court required. In 2005 the military essentially declared all prisoners at Guantánamo "enemy combatants," not entitled to the protections of civil law. Congress and the president passed legislation, the Detainee Treatment Act, barring detainees at Guantánamo from bringing future habeas corpus challenges to their detention or its conditions. But in June 2006, the Supreme Court ruled in Hamdan v. Rumsfeld that the federal government did not have the right to set up special military commissions in Guantánamo. The ruling implied that the Bush administration would have to try detainees either by court-martial (as U.S. troops and prisoners of war are) or by a civilian federal court.

But the government still refused to give our clients hearings, and in October 2006 the president persuaded Congress to pass the Military Commissions Act, which abolishes habeas corpus not just for Guantánamo detainees but for any noncitizen the president labels an enemy combatant. We will take the Military Commissions Act, too, all the way to the Supreme Court, but for now it is law.

Five years have gone by and we are still fighting a Sisyphean struggle. No detainees at Guantánamo or in any other detention facility have yet had a hearing in a court. They are again waiting for our challenges to be heard -- that is, for the Supreme Court, for the third time, to decide that they have rights. But by that time six or seven years will have passed since the first post-9/11 prisoners arrived at Guantánamo.

The realities of imprisonment there are worse than I could have imagined. Five years ago, I assumed that the Bush administration would claim Guantánamo as a law-free zone where the Constitution did not apply and where no court could examine the legality of the detentions. But I never believed that the detainees would be tortured and subjected to cruel treatment. I was dead wrong.

It's true that many torture techniques used at Guantánamo appear to have stopped -- in part because we now have CCR and other attorneys going to the base, in part because the men at Guantánamo never had very much to offer. Under pressure military policy has shifted, and the men called the most dangerous terrorists have yielded very little information. But these techniques have migrated to other places, even more secretive.

And the sad reality is that torture is now more accepted than it was five years ago. The Military Commissions Act, in addition to abolishing habeas corpus, made cruel treatment and torture the law of our land. The act grants an amnesty to those in the administration who have engaged in torture and cruel treatment since 9/11, and it modifies U.S. criminal law so they can continue to torture with impunity in the future. At other U.S. detention facilities, such as those at Bagram, Afghanistan, and secret CIA sites around the world, the kidnapped and the captured are "disappeared" and can be tortured. In order to reestablish the rule of law, the human rights that are at issue at Guantánamo must be extended so that U.S. law governs all U.S. actions.

These rights include lawful trials. The administration now plans to build a $125 million courthouse at Guantánamo to try detainees by military commissions under new procedures that have not yet been fully outlined. Whether these are lawful will again need to be tested in the courts. And though the administration says it plans to try as many as 80 people, whether any such trials will ever happen is not clear.

So time moves almost surreally slowly on Guantánamo, where today more than 400 people are still imprisoned, the vast majority without charges. Despite all the Supreme Court rulings, despite the popular outcry, despite calls from the military's own lawyers, Human Rights Watch, Amnesty International, British Prime Minister Tony Blair, German Chancellor Angela Merkel and former U.N. Secretary-General Kofi Annan to provide the detainees with rights and close the camp, there's no sign that Guantánamo will be shut down soon.

I wish after five years I could say we are emerging out of a long dark night of detention, disappearances and torture. But rolling back the Military Commissions Act, through litigation and legislation, and reestablishing the rule of law are a huge task. It will take political courage, an aroused public and constant vigilance. I hope -- for the sake of prisoners, their families and America -- it does not take an additional five years.